Akira Kurosawa is probably today the best known Asian film director in the West. But when he was making Rashomon, he’d directed a couple of films that were not particularly well received in the Japanese press. Originally, it was his brother who was the director, with Akira getting bit parts on his sets in the 1930s. But during World War II his brother committed suicide. In 1950, the local film board made the somewhat controversial decision to send Kurosawa’s latest film, little noticed in his home country, as the Japanese entry to the Venice Film Festival. To the shock of everyone back home, Rashomon won the Golden Lion for the best film at the festival and became a big hit in the West. Kurosawa went on to become one of the 20th Century’s most influential directors, though people in his own country always seemed a little confused by everything.

Rashomon is mostly known, especially by people who haven’t watched it, for its unique narrative structure, which retells the story of the same incident from numerous different perspectives. This might sound like something every TV show that runs long enough does once these days, but when those TV writers are talking about those episodes they call it “doing a Rashomon episode.” The movie also broke ground in a variety of areas of filmmaking that Kurosawa worked out with his cinematographer. Much of the movie takes place in a lush forest, and Kurosawa would wait for a cloud to go across the sun or whatever else he needed to get the lighting right. That wasn’t really something people were doing before this.

The story of the movie is told by a woodcutter (Takashi Shimura) to two companions, a priest and a cynical “common man,” as the three of them hide from a torrential downpour underneath the “Rashomon Gate” into Medieval Tokyo. The woodcutter describes an investigation he witnessed into an incident in the forest, in which a bandit (Toshiro Mifune) is alleged to have killed a samurai (Masayuki Mori) and then raped his wife (Machiko Kyo). We see versions of the incident as told by the wife, by the bandit, the samurai (his ghost speaks through a medium, which everyone involved seems to think is totally normal), and then the woodcutter himself, who claims to have witnessed the incident. The other characters then figure out the woodcutter is also probably lying. The commoner gives his opinion that the truth is impossible to know and “all men are motivated only by self-interest.” Then the men suddenly find an abandoned baby and the woodcutter says he’ll take care of it along with his other six kids. The priest thanks the woodcutter for restoring his faith in humanity and the rain stops.

As the story goes, during filming, the actors asked Kurosawa what the real truth of the story was. He replied very firmly that this wasn’t the point. The stories never do fit together in a way that makes sense. In the wife’s version, it’s her that kills the husband, though she says it’s by accident. The samurai’s ghost says his wife preferred the bandit, and that he killed himself from shame. The woodcutter says the bandit was lovesick for the woman but that the samurai hated her and refused to defend her. And so on.

Rashomon was one early example of 16 total collaborations between Kurosawa and Toshiro Mifune, one of the most fruitful director/actor partnerships in the movies. Many of them were period pieces involving samurai, but others had Mifune as an aging businessman or a put-upon father. Many of Kurosawa’s samurai films were remade in the west. Yojimbo (“Bodyguard”), with Mifune as a wandering samurai caught in a battle between crime bosses for a small town, was “unofficially remade” by Sergio Leone as A Fistful of Dollars, the first big western with Clint Eastwood. This led to a lengthy lawsuit, since, bizarrely, nobody asked permission first. Kurosawa himself was not above borrowing: two of his best known films are based on Shakespeare plays with the setting changed to Japan, and he also did a version of Dostoevsky’s The Idiot set on Hokkaido. 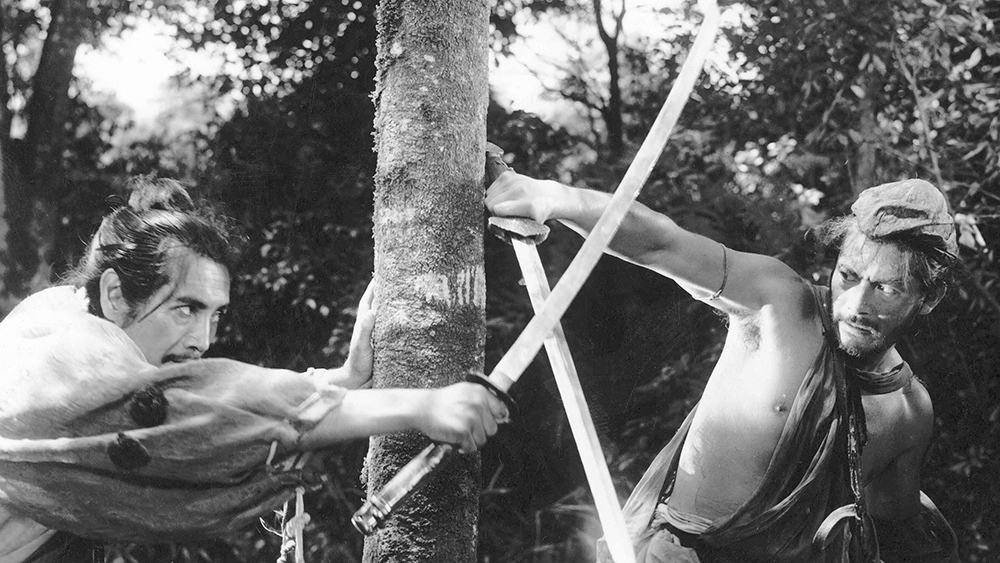 I could spend pages and pages listing every famous filmmaker who listed Kurosawa among their biggest influences. Probably the best known in the mainstream is George Lucas, who was very open about cribbing bits of the original Star Wars fairly directly from Kurosawa’s The Hidden Fortress. When he then discovered that Kurosawa, still not particularly well thought of in his own country, wasn’t able to get funding for his next movie, he talked Francis Ford Coppola into co-producing it with him. The resulting movie became Kagemusha (“Shadow Warrior”), which won the 1980 Palme d’Or at Cannes.

There is even a Wikipedia entry, I’ve discovered, for “The Rashomon Effect,” a well known term in both the legal and journalistic arenas. It concerns the surprisingly common event of eyewitness accounts directly contradicting each other. It includes the line “the Rashomon Effect has been defined in the modern academic context as the naming of an epistemological framework.” The more you know.