Buster Keaton once said that the idea for Sherlock Jr. came from a single image, that of a character walking out of a theater into a movie screen and suddenly being a character in the movie. On a basic level, that conceit still very much works. With movies still in their infancy, Keaton came up with perhaps the first movie about the magic of movies. Keaton was ever the action star. Here he adds to that a bunch of camera tricks that he and his crew had to invent. The sequence where he climbs into a movie and the scenery keeps changing around him at inopportune times is funny today, but in 1924 it must have been like magic.

Keaton plays a movie theater projectionist who is studying to be a detective, which we know because we first meet him reading a book titled How to Be a Detective. He wants to get with a girl (Kathryn McGuire), but is framed by “The Local Sheik” (Ward Crane, billed with a title I assume made sense in 1924) for stealing her father’s pocket watch and told he’s never welcome in her house again. She is just billed as “The Girl,” as is common in silent movies, and her father is played by Joe Keaton, Buster’s actual dad. 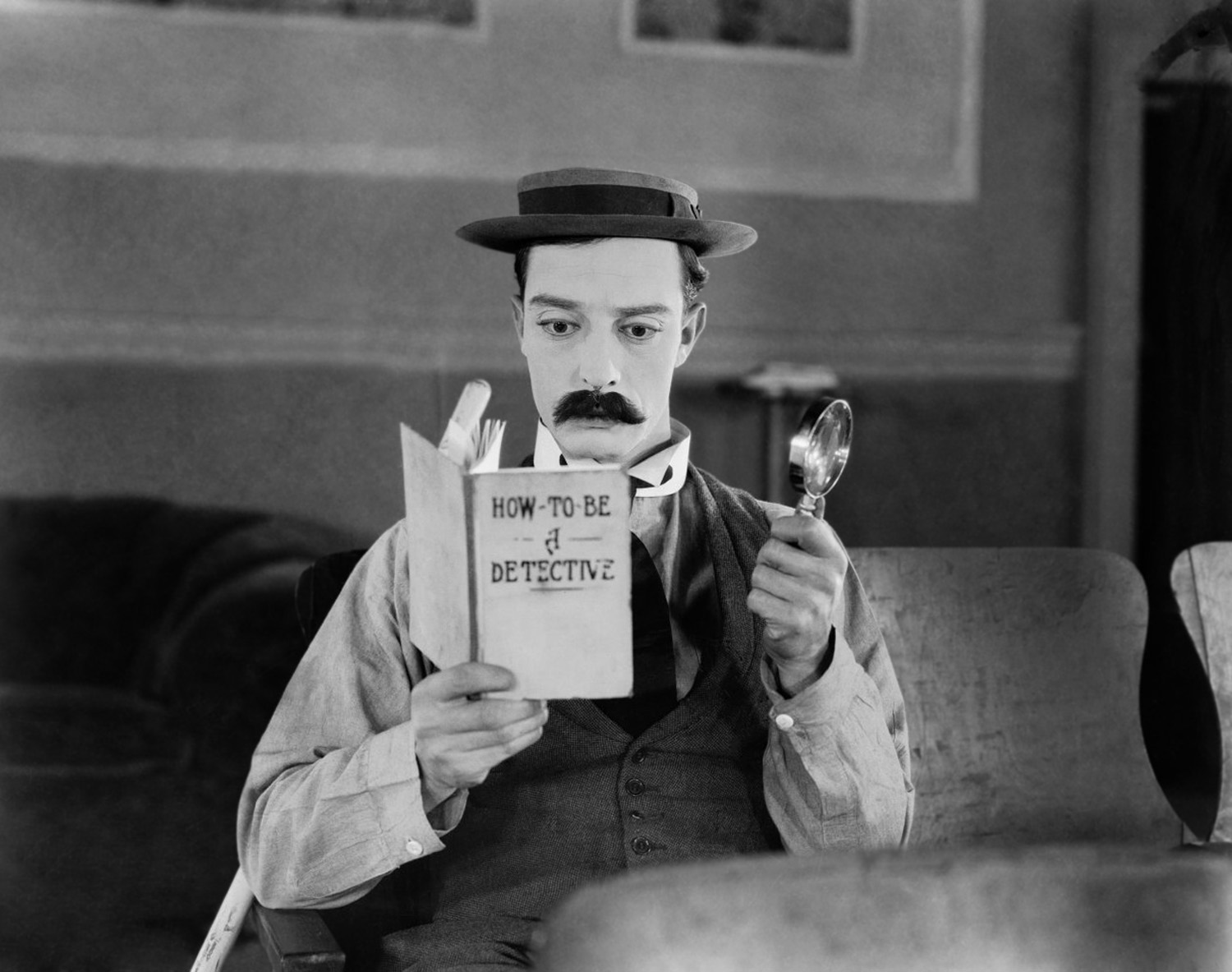 While subsequently showing a movie about the theft of a pearl necklace, Keaton’s projectionist falls asleep, climbs out of his body, and up onto the screen, where all of the characters change into people he knows. Keaton himself plays the “world’s greatest detective,” Sherlock Jr. In the movie, he solves the crime and saves the Girl from the thieves (a sequence that includes what seriously is one of the best car chases I’ve seen in any movie, regardless of era). Then, back in the real world, the Girl comes to Keaton and says that her father figured it out and that they realize they made a huge mistake. Not sure what to do, he imitates the characters still on the screen and kisses her.

By modern standards, Sherlock Jr. is extremely short, only about 45 minutes long. This wasn’t unusual in its time, however, as it was common for comedy shorts to be shown before the main feature. Despite the length, it took Keaton twice as long to film as his usual movies, because of all the camera tricks. Accounts from the time had audiences more gasping in amazement than laughing. In one scene, when Sherlock Jr. confronts the thieves in their hideout, we watch him enter a building, at which point the side of the building fades away so we can see what’s inside. Now imagine doing stuff like this without anything approaching what we today would call special effects.

It’s because of that lack of special effects that Keaton’s movies are so amazing. It’s less that someone couldn’t do these things today, it’s that they just wouldn’t risk it. Sherlock Jr. includes perhaps Keaton’s most famous mishap, during a scene where he gets off the top of a train by hanging onto the spout of a water tower, only for water to pour down on him. During shooting, the water came down with such force that Keaton fell backwards onto the railroad tracks, striking the back of head on the rail and nearly breaking his spine. He experienced migraine headaches for years afterward.

One reviewer I’ve read points out that in some ways that sequence with the train, and many other bits of the movie, are a bit like a side-scrolling video game. Once Keaton climbs into the movie screen, we stay on the wide shot of the rectangle on the screen for what seems like forever, so we don’t forget what we’re seeing. A lot of Keaton’s action sequences seem to happen entirely inside this artificial frame, and only end when he himself suddenly seems to realize that he can move in more than two dimensions. The movie is playing with this idea that the real world and the movie world are interacting, where one character knows he’s in a movie and the others don’t. Except, of course, we the audience knows that he’s a movie character too. It’s the closest the mid-1920s would get to its own version of Inception.

On lists of great movies these days, you’re more likely to find Keaton’s filmography represented by The General. That movie is certainly longer and “bigger.” There’s nothing in Sherlock Jr. to match that bridge collapsing under a train at the climax of The General, in terms of scope. But this movie feels a lot more like a magic trick, and I don’t just mean the camera effects it pulls off. That 45 minutes isn’t a second too long or too short. I continue to be amazed by movies from almost a century ago that still completely work for me today, and this is one of them.

Before I go, I do want to mention that weird “Jr.” in the title. I have done at least cursory research on this and continue to not be sure why it’s there. There’s no discussion of Sherlock Holmes or any indication that Keaton’s character is supposed to be his son or anything like that. I considered that maybe it was a copyright thing, but it doesn’t seem like the “Jr.” would have actually gotten them around that. Perhaps things were different in 1924. It is also worth noting that Keaton returned to this formulation four years later for another of his most famous movies, Steamboat Bill, Jr., but in that movie he’s specifically playing the son of an older character named Steamboat Bill, Sr., so it actually makes sense.