I liked the idea of Shane, which I was already deeply familiar with from several dozen other movies, than I ended up liking the actual movie. In its basic structure of “reluctant hero with a mysterious past strolls into town, helps the downtrodden, then leaves because he doesn’t deserve happiness or something” presages everything from Kung Fu to The Incredible Hulk. It even has a scene where the titular hero Shane (Alan Ladd) asks an assailant, “Are you talking to me? Because there’s nobody else here.” Yet to me its one of those movies you could move off the AFI list today to make room for any of three dozen other deserving candidates. I honestly don’t see, for example, why you would need both this movie and Unforgiven on the list, when Unforgiven is probably a better-made film and also lacks the relentlessly annoying child this movie features so heavily.

The plot of the movie is (very) loosely based on the actual historical incident of the Johnson County War, a conflict between different types of landowners in late-1800s frontier Wyoming that has also served as the inspiration for several other movies. These include The Virginian, Heaven’s Gate, and Clint Eastwood’s own Pale Rider. It opens with the mysterious Shane riding onto the homestead of Joe Starrett (Van Heflin), his wife Marian (Jean Arthur), and their young son Joey (Brandon deWilde). Shane is about to leave when local tough guy rancher Ryker (Emile Meyer) shows up to vaguely intimidate them into leaving, and after he backs up Starrett he is invited to stay and work on the farm. Joey is entirely star-struck, believing that Shane can do no wrong. When Shane lets the rancher’s son (Ben Johnson) throw a drink on him without fighting back, the kid is heartbroken, because I guess starting a big local war would have been “braver?”

The ranchers are determined to kick out the group of local homesteaders, to the point of bringing in a scary gunslinger, Wilson (memorably portrayed by Jack Palance), who is helpfully dressed entirely in black in case we did not realize he was the bad guy. Wilson provokes the hot-headed former Confederate, “Stonewall” Torrey (Elisha Cook, Jr.), another weird example of classic Hollywood siding with the South, into drawing his gun, and shoots him down in the street. Shane seems to secretly be the most competent of the group, and we gradually realize that he’s running from his own past as a “gunslinger” (mostly because, if he wasn’t, there would be no reason to have a movie). Ryker then invites Starrett to a meeting, with the real intention of having Wilson kill him. But Shane fights and knocks out Starrett to prevent him from going, appears in his place, and successfully shoots everyone in a surprisingly brief gun battle. The movie famously ends with Shane literally riding off into the sunset, as Joey desperately calls out for him to stay.

As a movie, there’s honestly not a lot to it. I get that I’m supposed to be rooting for the “little guy” farmers against the big bad ranchers, but honestly if they didn’t hire the assassin, I’m not sure I wouldn’t say the ranchers were actually right. The little kid it puts so much thematic weight on is really aggressively annoying, in ways that I get the sense are only sometimes intentional. And the movie’s early-widescreen cinematography is famous, but I’m not sure it’s actually good. The location shooting, much of it done in the actual Jackson Hole, Wyoming, area, backed by spectacular mountains, is beautiful, don’t get me wrong. But there is a lot of dodgy day-for-night shooting that mostly does not work, and the colors mostly feel somehow washed out. 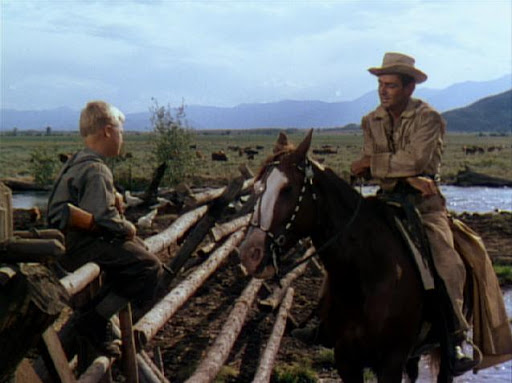 If there are some weird technical moments in this movie, they can at least partially be attributed to the fact that its studio, Paramount, had originally seen the project entirely as just another B western, with a budget and shooting schedule to match. But director George Stevens, a Hollywood vet whose work had included such diverse fare as Swing Time and A Place in the Sun, saw something in the material, went far over-budget and over-time, and produced a weird movie that the studio didn’t have any idea what to do with. They delayed release for over a year, during which time the studio tried to sell the movie to Howard Hughes. After actually watching the thing, Hughes immediately offered them $1 million dollars, leaving Paramount to wonder if they hadn’t missed something. They made Shane their featured release of 1953, and it became a big hit.

I found myself not sure how to actually feel about Shane as a character, which I do think is very intentional. Despite the very clear white hats vs. black hats dynamic at play here, the movie does not seem, to its credit, to fully side with young Joey on its stance about violence vs. pacifism. What I mean is, when Shane finally realizes what he has to do and kills all the bad guys, the movie could easily have wanted us to go “Finally!” Instead, it gives us something closer to a sense of loss. Which is a lot for an early-50s western, you know? The movie’s complicated relationship with violence extends to its actual portrayal thereof. Stevens is generally credited with being the first director to yank his actors backwards with cables as they were shot, in order to emphasize the impact of the bullets. Stevens said he wanted his audience to experience “the horror of violence” through techniques like this, but of course it would later be used in many later action movies just to make things look cool. 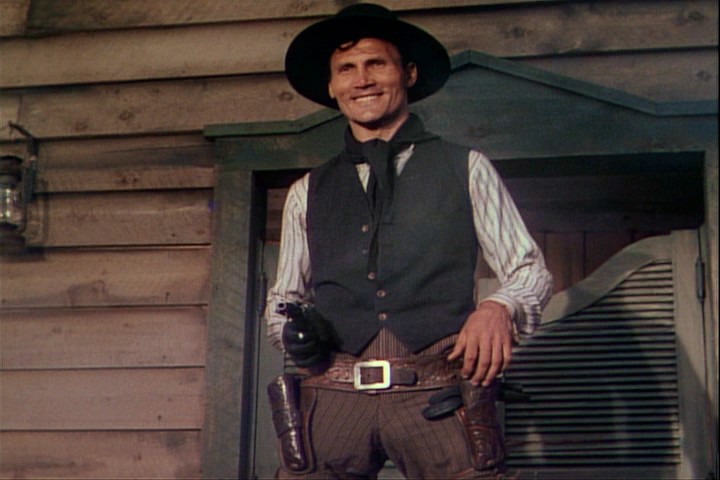 The most memorable such scene, for me, is the death scene of Elisha Cook, Jr.’s character, Torrey. He barely gets his gun out of his pocket by the time Wilson has his gun trained on him. Wilson smirks as Torrey hesitates, then guns him down in cold blood. Director Sam Peckinpah, known for his own use of spectacular violence, later said that “when Jack Palance shot Elisha Cook, things started to change.” By this he meant that portrayals of violence became less incidental to movies, while simultaneously becoming more “realistic” in those portrayals, for better or worse.

Shane has become a cultural touchstone, not only quoted by Taxi Driver, but also, more recently and repeatedly, by Logan, which even climaxes on a recitation of Shane’s final speech. I think this can probably be attributed at least partly to the way it stirs all sorts of emotions in normally repressed dudes in a rare, societally-acceptable way. Even though Joey’s actual dad lives through the movie, when Shane leaves he feels like a stand-in for a hundred thousand guys who don’t normally cry in movies. But I found myself lacking that emotional connection, even when the movie wants to give it to us on an elemental level. The completely over-the-top fight in the third act between Shane and Joe Starrett takes place in the driving rain, amidst the screams of both the man’s wife and child and the surrounding farm animals. From a sound design standpoint, it really interesting, but the movie never got me to the edge of my seat. Is that my problem, or the movie’s? I have my own thoughts on this.