Saying Johnny Guitar is your favorite Western is a little like saying Radiohead is your favorite rock band or that Deep Space Nine is your favorite Star Trek TV series. It is probably a valid answer, but you may be seen as trying a little too hard to be cool. It feels very much more complicated, on an emotional and thematic level, than any “classic” Western we have yet covered here on Movie Valhalla. It is, at its heart, about a central rivalry between two female characters, and the male society around them that can’t quite deal with either of them. It also has a deep emotional intensity that feels strange in a genre generally associated with large, stoic men. And it ends, not in triumph, but in general tragedy. It is more a Shakespearan tragedy than a triumphant yarn of the American spirit, or what have you.

Joan Crawford plays “Vienna,” the proprietress of a surprisingly large gambling hall and/or saloon in late 1800s Arizona, seemingly poised to make a killing once the railroad comes through. “I never thought I’d end up working for a woman, much less liking it,” comments her employee “Old Tom,” played by the great John Carradine. “I never met a woman who was more man.” Her life is complicated, however by a large posse of locals from a nearby town, one of whom is an understandably angry young woman, Emma (Mercedes McCambridge) whose brother was just killed during a stagecoach robbery. This group accuses a local gang led by “The Dancin’ Kid” (Western star Scott Brady, who does not dance at any point in the movie) of the murder, and though they can’t pin it on Vienna, decide she has to leave in 24 hours or else. Meanwhile, an old flame of Vienna (a big, sad-faced galoot played by Sterling Hayden) appears, supposedly having been hired by her to play guitar in her saloon. He goes by “Johnny Guitar,” hence the title.

But, in fact, Johnny is actually a famous gunslinger named “Johnny Logan,” and in fact The Dancin’ Kid has a thing for Vienna, and in fact Emma’s whole motivation is that she herself has a thing for The Dancin’ Kid, to the point where if she can’t have him she’d rather he’d be dead, and so on. Compared to the relatively straightforward likes of Rio Bravo or High Noon, Johnny Guitar is straight up byzantine in its plotting. Everybody is tangled up with everybody else, and everyone’s motivations are much, much murkier. Though those movies may end in heroic, exciting gunfights, this one ends in apocalyptic Grand Guignol, in explosions, fires, and hangings. The climactic burning of Vienna’s was so spectacular and effective that it was repeatedly re-used as stock footage in other Westerns for decades.

Going along with this is the way the movie is just slightly overwrought from beginning to end. When the townspeople show up at Vienna’s, Joan Crawford yells, “How dare you come here with your angry faces and your evil minds!” She tells Johnny that she doesn’t want to get back together with the line, “When something burns too hot it just turns to ashes.” “How many men have you forgotten?” he asks her. “As many women as you’ve remembered,” she replies. This is all, as Roger Ebert wrote, basically a “psychosexual melodrama” disguised as a Western. He also pointed out that all the sexual energy seems to be between Crawford and McCambridge’s characters. Vienna repeatedly accuses Emma of being jealous due to Emma’s buried yearning for the Dancin’ Kid, but in fact, as Ebert notes, “there is hardly a moment when Emma can tear her eyes away from Vienna to glance at the Kid.” Despite being the gunslinger, Hayden seems to almost have the damsel role. Francois Truffaut said the movie reminded him of Beauty and the Beast, with Hayden playing the Beauty. 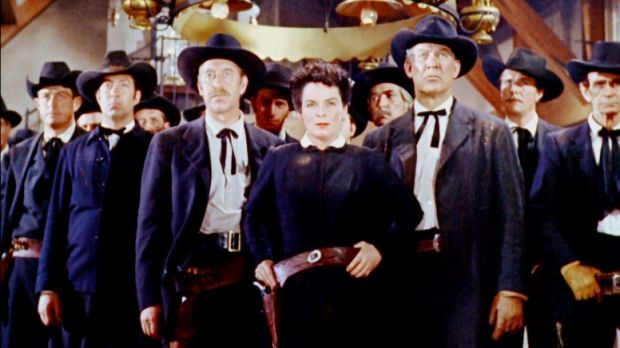 Johnny Guitar was always intended as a vehicle for Crawford, who had been trying to get a Western made with her in a starring role for years at this point. It was a made on a shoestring budget by the second-tier studio Republic Pictures, and directed by Nicholas Ray, who never met a weird sexual undertone he didn’t like. It’s notable that, despite being apparently set in a “saloon outside town,” we never really see “town,” and only really see the main area of the saloon. Crawford and McCambridge apparently really did hate each other (as, for example, Crawford and Bette Davis did on the set of What Ever Happened to Baby Jane?). Crawford’s daughter famously wrote a book a few decades later called Mommie Dearest (made into a 1981 movie starring Faye Dunaway as Crawford), discussing her abusive childhood and crazy mother. Crawford was apparently drunk much of the time on set, and became jealous whenever director Ray decided to work with McCambridge. She ended up throwing all McCambridge’s costumes into the middle of a busy street in a drunken rage. Afterwards, Sterling Hayden reportedly said, “There is not enough money in Hollywood to lure me into making another movie with Joan Crawford. And I like money.”

The story goes that Ray openly encouraged Crawford and McCambridge’s enmity, because he thought it enhanced their performances. Maybe he was right, because these two seem more believably angry with each other than pretty much any other movie characters I can think of. Yet at the time of its release, nobody seemed to know what to make of this movie. Variety said that the movie “becomes so involved with character nuances and neuroses, it never gets the chance to rear up in the saddle.” Harsher was the old New York Times grump Bosley Crowther, who said that Crawford, “as usual, is as sexless as the lions on the public library steps [what] and as sharp and romantically forbidding as a package of unwrapped razor blades.” Nope, no misogyny there. 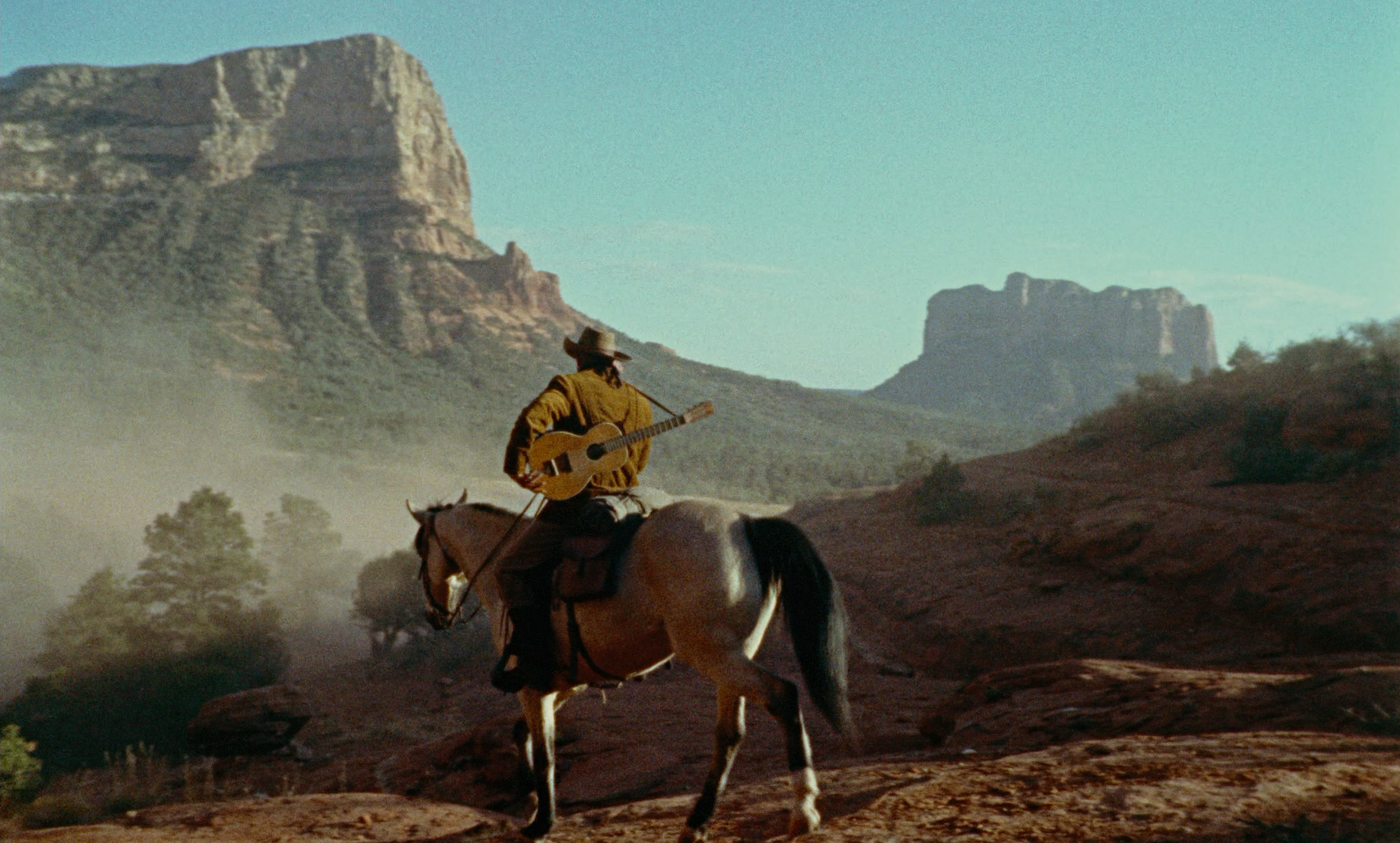 But it wouldn’t be too long before later generations, including Truffaut, Godard, and Scorsese, would revitalize Johnny Guitar’s reputation, and I would say deservedly so. This is a Western for weirdos, one that knows the rules, and has therefore decided to break them. It is also frequently very silly. At one point Crawford holds off a bunch of armed men with… a piano solo? Perhaps it is this general weirdness that allows the movie to be much more emotionally and thematically interesting. As Ebert put it, “were they thinking they could get away with murder because the surrounding movie was so goofy?”

Perhaps Johnny Guitar is not for everyone, but if you are a Western fan, I would recommend it. And I would probably recommend it to someone who is OK with Westerns but mostly just likes interesting, weird movies. To call it one of the great movies of all time, as some (especially European) critics seem to do occasionally, is probably a stretch, but I did find it a fascinating watch.