Spirited Away is a movie about a little kid, and told mostly from her perspective, and unlike in a lot of movies she actually acts like a little kid does. That is, for at least the first half of the movie she is pretty useless and scared of everything. But this is also, unlike a lot of movies, not one to “coddle” its little kid heroine, in that actual bad things do happen to her, people are actually mean to her, and so on. It’s not so much that this is a scary movie, though I have a feeling that there are plenty of things in her that might scare impressionable young children (like I was). What I mean is that nobody has any patience for her little kid nonsense. But in the end, she gets her crap together and actually solves her own problems, along with some other people’s. In that sense, if your kid has the constitution for it, so to speak, this is maybe the best movie I can think of for little kids? I would argue that “you are capable of doing things for yourself” is maybe a better and more necessary message than “we are all special” or whatever the message of kids movies usually is these days.

The animated movies of director Hayao Miyazaki and his Studio Ghibli were extremely popular in Japan, and highly acclaimed among select critical circles and among a segment of Japanophiles. In 1988, for example, Miyazaki and Ghibli released both My Neighbor Totoro and Grave of the Fireflies, which are wildly different movies but both became staples of “obscure movies I love” recommendations ever since. However, I at least would argue that Miyazaki was considered a very niche interest pretty much everywhere outside Japan until Spirited Away, which received a semi-contemporaneous wide release worldwide without some American distributor trying and failing to fit it into the usual kids movie boxes. It came out in Japan in summer 2001, and by the end of the year became the highest-grossing film at the Japanese box office all-time (it was also the first movie ever to gross $200 million worldwide without having even been released in the US). It won the Golden Bear (the award for the best film) at the Berlin International Film Festival, the only animated movie ever to do so, then went on to win the Best Animated Feature Oscar, not in the awards for 2001 but for the year after, because of when it finally received a US release. The award was only in its second year of existence at that time, but Spirited Away’s victory over “mainstream” movies like Lilo & Stitch and Ice Age was considered a big upset, and it remains the only non-English language winner of the award. Though I do think the fact that it had a high-quality English dub directed by Pixar head John Lasseter (a long-time Miyazaki fan) helped. Today, “Studio Ghibli” is featured as one of the major “channels” on HBO Max, alongside things like Harry Potter and DC Comics. 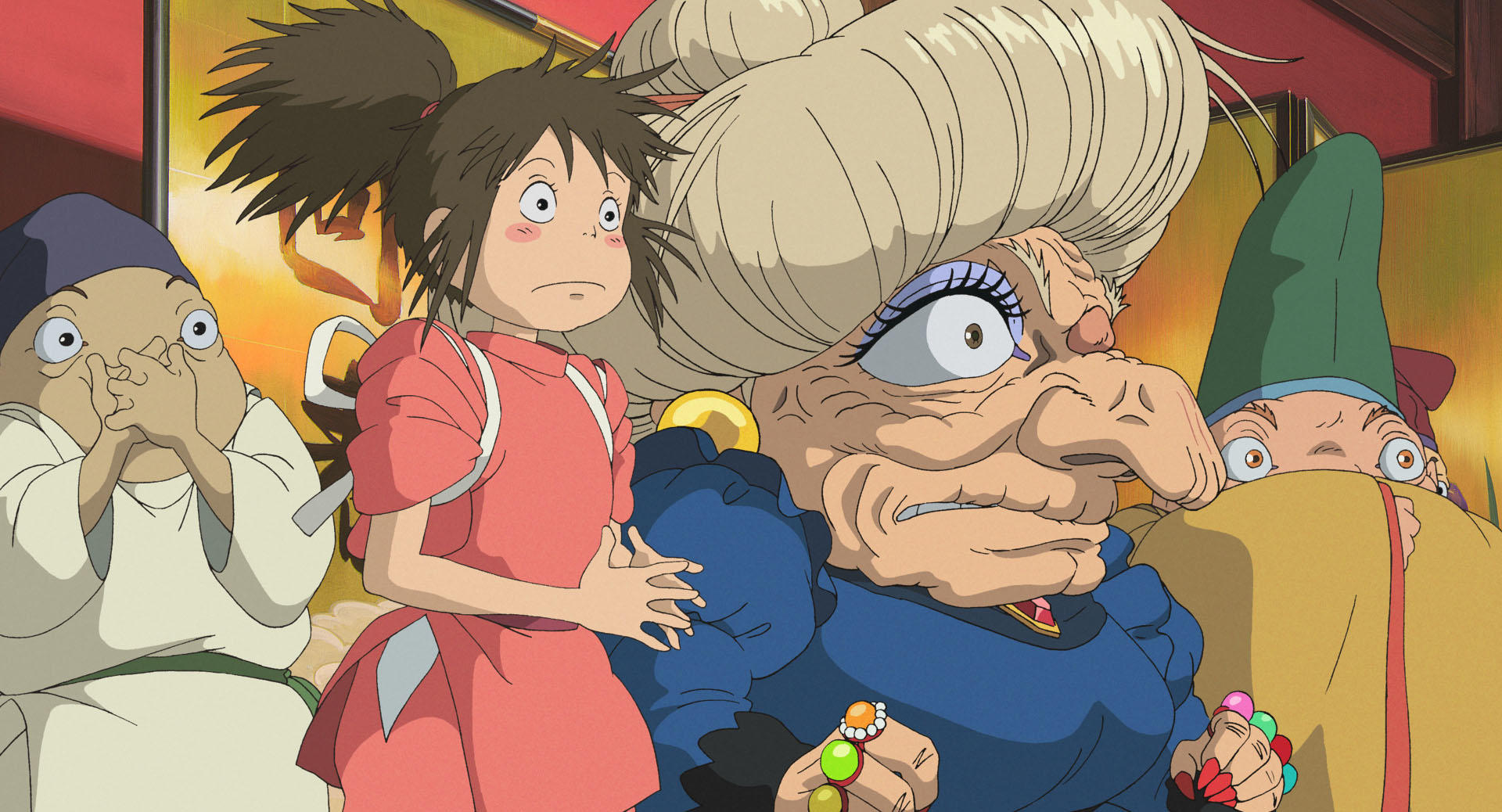 This crossover success of Spirited Away might be made more surprising by the fact that, to me, it is “more Japanese” than some other Miyazaki films. It is heavily based on the spirit world of Shinto folklore, and much of the action takes place at a traditional “bath house,” the sort of place very familiar to Japanese viewers that may not be so much to westerners. Chihiro (Rumi Hiiragi/Daveigh Chase) is a ten-year-old girl who is upset because her family is moving to a new town and away from her friends. On the car ride to the new house, her family accidentally stops at an old abandoned amusement-park-looking place, which her parents decide to check out over Chihiro’s strong objections. Finding some tasty food seemingly set out for them, her parents eat it and suddenly are magically turned into pigs. When the sun goes down, Chihiro suddenly finds herself surrounded by spirits and monsters. The park is actually a bathhouse for spirits run by the witch Yubaba (Mari Natsuki/Suzanne Pleshette, in her final film role).

Left on her own, Chihiro gets some help from a boy named Haku (Miyu Irino/Jason Marsden), who eventually turns out to actually be a Japanese-style dragon in disguise who has been enslaved by Yubaba. In order to stave off Yubaba long enough to figure out a way to save her parents, Chihiro has to get a job at the bathhouse, which she eventually succeeds at despite being set up repeatedly to fail by Yubaba. The job is basically “give baths to monsters” but the movie seems to understand inherently that this really would be a huge adventure for a 10-year-old girl, monsters aside. There is eventually a crisis, which Chihiro solves by taking the train by herself to go apologize to someone, basically. This is not really a movie with action sequences, and the tasks set for Chihiro are overwhelming to her because she is a little kid, not because they are superhuman feats. I would argue that really what sets Miyazaki’s films for small children (not only this one, but Totoro, Kiki’s Delivery Service, and a few others) apart from all others is that they really seem to understand what being a little kid is actually like, and are able to present themselves from that perspective.

Each Ghibli film has, to some degree, its own style, but as with many of them, the animation in Spirited Away is next-level spectacular. Pixar and other computer animation houses have succeeded in producing greater and greater levels of realism over the years, it’s true, but I would argue nobody has yet matched the sheer level and amount of detail in Spirited Away. There are scenes of crowds throughout this movie where different things seemed to happening in every corner of the screen, which today would probably be filled out with computer-duplicated people (as were the armies in The Lord of the Rings that we talked about a few days ago), but you know looking at this that each one of the characters on screen was lovingly and individually created.

I could, and many people have, get deeper into the themes of Spirited Away, which not only has a message of self-reliance for little kids but also dips into things like anti-consumerism (the parents turning into pigs is sort of an on-the-nose metaphor, as is the bathhouse staff wildly grubbing for gold pieces later on), and environmentalism (the spirit of a polluted river puts in a prominent appearance). But unlike, say, Princess Mononoke or Nausicaä of the Valley of the Wind, this is not a movie that wears its allegory on its sleeve, so to speak, and I would say it’s probably better for it.

I don’t get too much into recommendations for kids on here, because I don’t have kids, I’m not good at figuring out what people who are not me are going to like, and I think that, as kids go, my own experience is probably not especially illuminating of that of the kid population as a whole, if you will. But I do think that, if you think your kid can handle some big, cute monsters and a kids’ parents getting turned into pigs by a kind-of-scary-looking witch, Spirited Away is probably one of the movies I would recommend most highly for young kids. As an adult, I’ll admit that I find the Chihiro from the early parts of the movie an annoying, useless crybaby. But it’s important to note that this is the point, and also that this isn’t made with me as an adult in mind. Miyazaki is not attempting that balancing act of so much Pixar-era western animation, where it’s trying to be for both adults and kids at the same time. But as an adult this movie still does hold my interest, because the animation is just so absolutely gorgeous. Some might bat an eye at the BBC, in 2016, declaring Spirited Away to be the 4th-greatest film (and the highest-ranking animated movie) of the first quarter of the 21st century, but I would argue that few movies succeed at what they set out to do so spectacularly.