The Harry Potter book series is among the most popular of all time (pretty much the most popular if you look at pure financial sales numbers) and made its author, J.K. Rowling, literally richer than the Queen of England. Rowling herself has in more recent years become the subject of controversy due to her views on trans people, but even before that, people could and did make plenty of arguments about the quality of the books themselves. But there always was something about the series that couldn’t help but capture many people’s imagination. Rowling is hardly in possession of the most inspired prose style, and many of the later books in the series are, frankly, much too long, but there is something about living in that world that still draws readers young and old in today. Perhaps surprisingly, that the books remain an enduring media giant today, with multiple theme parks and everything, is, I would argue, mostly a result of the successful movie adaptations that would be made from them. Had the Harry Potter movies been terrible, would anyone read the books anymore? I’m not so sure.

Or maybe the books were such a behemoth that they forced the movies to take a different approach. While The Lord of the Rings, three movies shot all at once, changed the modern blockbuster in some ways, I would argue that the Harry Potter films (a total of eight were eventually made from the original seven books) were the true herald of the modern multiplex-dominating franchise. All eight movies feature almost entirely the same cast (the only major change being Michael Gambon taking over as Professor Dumbledore after the death of Richard Harris) and are unrelentingly of a piece with each other. And the books were so popular that the movies had to hew as faithfully to them as possible. They say that television is a writer’s medium and the movies are a director’s medium, but the modern franchise movie is more of a producer’s medium, and the Harry Potter movies feel like the genesis of that theory. The eight movies would end up having four directors between them, but none of them was really ever given enough latitude to make something truly, crazily surprising or truly, crazily bad. 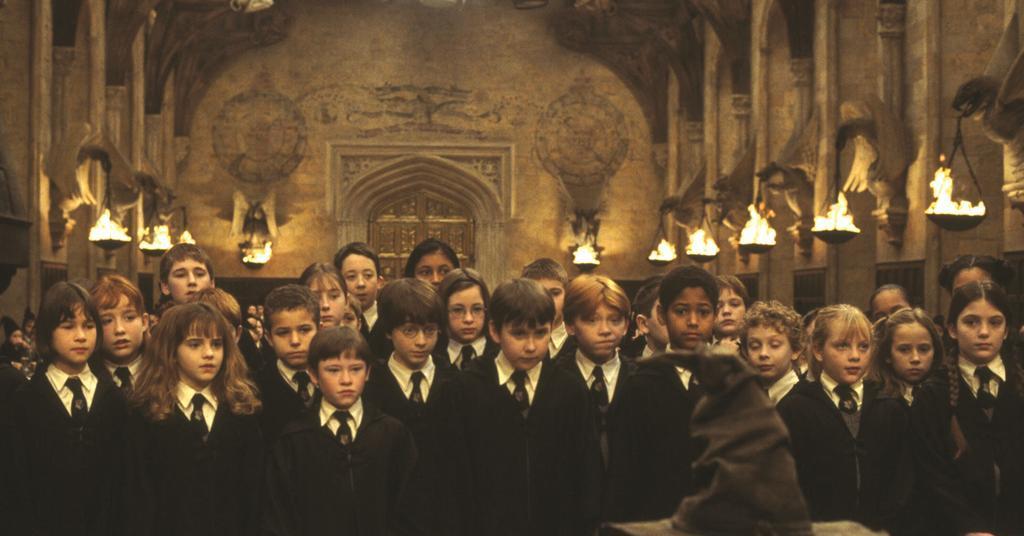 The biggest reason it all worked, I’d argue, is that the series completely lucked out in its casting, both of its group of child actors, who would all stay with the series as they and their characters grew up, and in the casting of the many adult roles. Of the central trio of kids, Daniel Radcliffe, who plays Harry, and Emma Watson, who plays Hermione, have both turned out to be great actors with really interesting careers, which is not usually what happens when you pick a bunch of eleven-year-olds or whatever out of a casting call (also Rupert Grint is perfectly fine as Ron, though I don’t think I’ve ever seen him in any other role). Today it is impossible to imagine anyone but the late, great Alan Rickman as Severus Snape (that is the sort of name people have in these books), but in fact Tim Roth was offered the role… he ended up turning it down in favor of, of all things, the Tim Burton Planet of the Apes movie. Meanwhile, both Patrick McGoohan and Christopher Lee were offered the part of Dumbledore, but turned it down due to their own scheduling conflicts. The producers kept a strict rule, at Rowling’s urging, of casting only British and Irish actors as the primary characters, and though the producers were repeatedly tempted to break this rule for various big Hollywood stars, they never did.

The actual story of the books is well known right now, and for obvious reasons far more of the first film (like the book called Harry Potter and the Philosopher’s Stone in the UK and Harry Potter and the Sorcerer’s Stone in the US, apparently because Americans think philosophers are lame) is devoted to setting up the general world than the others. Harry Potter (Radcliffe) is an eleven-year-old orphan who lives with the sort of absolutely awful step-family only British childrens’ literature can provide. Soon, however, he is revealed to be a wizard and invited to attend a fancy wizard boarding school called Hogwarts. There he meets the doofy Ron (Grint) and the very smart Hermione (Watson) (who is so clearly the best and most interesting character she almost breaks the story, because the only reason Harry is the hero and not her is that fate has decreed it or whatever). The school is run by wise old Professor Dumbledore (Harris) and his giant beard, with Rickman and Maggie Smith playing a few of the more prominent teachers (many others would be added throughout the series). Harry’s enemy is the evil Lord Voldemort, who does not appear in the flesh (mostly) until later in the series, though his agents are known to be everywhere.

The biggest thing about the Harry Potter series that always worked was the way it builds this comprehensive world that sits, theoretically, alongside our own. There are wizard versions of seemingly everything, there is wizard back to school shopping (John Hurt shows up in this movie and several subsequent editions as the guy who sells people their wands, for example), wizard dumb school traditions (“five points to Gryffindor”) and even wizard sports (this movie is surprisingly into the seemingly ill-thought-out sport of quidditch, involving teams on flying brooms… the 2001 special effects are up to the job, but seemingly only just). As a movie it is so packed with tiny side characters and things that they just had to get in there that it almost forgets to have a plot. When one of the teachers is eventually revealed as the overarching bad guy of the first movie, we are left going “Oh yeah, I forgot about that guy” instead of shock or whatever they were going for.

Despite the rule about only British and Irish actors, Philosopher’s Stone was directed by an American, Chris Columbus (writer of The Goonies and Gremlins, director of Home Alone and Mrs. Doubtfire), and it is to Columbus for whom at least some of the credit for assembling that cast goes. He doesn’t bring much style to the proceedings visually, but does manage to capture the general feel of the first book. He has the central dilemma of having small children as his stars, and the tone of the film right about matches this. The later movies would be much darker, not just in subject matter, but in purely visual terms, and also feel much more “lived-in.” That this movie and some of the later films, with their almost cinema-verite wand fights with handheld camera work and lens flares, are able to coexist peacefully is sort of a miracle, but I think they do. For me, Philosopher’s Stone is perfectly fun but mostly interesting as a precursor to some of the later films (I would actually argue that the best films are probably the middle few, while the later ones suffer from being adapted from books that, while not entirely off the rails, don’t quite work as well).

Anyway, of course any franchise as massive as Harry Potter wouldn’t just end, and there have since been two mostly dumb prequel films, with a third on the way (partly set in America, which to be clear basically no one wanted). Unlike the original movies, the screenplays for these were written by Rowling herself, and without having books to base themselves on are just big messes honestly. To say that interest in the series has waned is less true, maybe, than to say that the content coming out now is not satisfying that interest. The Harry Potter franchise has been passed today in multiplexes by the superhero movies it, perhaps, prefigured. Marvel has gone that final step and jettisoned the central author who could make a tweet at any second revealing themselves to be an asshole. That decentralization also enables Marvel to make so many movies that they can have both surprising movies and bad movies… if you don’t like The Eternals, Spider-Man: No Way Home will be out the next week, and so on. But it could certainly be argued that Harry Potter, with essentially the same cast telling a coherent story over a long film series, walked so that Marvel could run.