The “Disney Renaissance” animated films are likely among the greatest works of art created by purely corporate culture, without a trace of auteur theory. You won’t find any of them acclaimed in Cahiers du Cinema, and I honestly couldn’t tell you who directed any of them, but I do believe that the Disney animation department made several of the best films of its era, starting with The Little Mermaid in 1989 and continuing through the 90s. All of these films contain many if not all of the elements of a standard formula. They’re all musicals, with many of the same types of songs (to the point that at one point when I was a kid McDonald’s gave away mix-tapes with Happy Meals of similar songs, like “I Want Songs” and, my personal favorite, “Villain Songs.” Many of the movies centered around a “Disney Princess” or other strong female lead, with various cute animal sidekicks, backed up with the most technically proficient animation that had been seen up to that time.

Said Renaissance can really be divided up into two eras, the first of which includes not only The Little Mermaid but also Beauty and the Beast, Aladdin, and The Lion King, all of which are now sort of monolithic classics. After this point, the animation department started taking bigger risks and telling, if not more “adult” stories, stories aimed more squarely at slightly older children, including Pocahontas, The Hunchback of Notre Dame, Hercules, Mulan, and Tarzan. These movies are generally seen as not quite as successful and are likely less seen these days, with the notable exception of Mulan.

This film, which gets the same live-action treatment that several of the earlier films have already received in a film “opening” on Disney Plus streaming this weekend, has become something of a “thinking person’s” favorite of the “Renaissance” films over the years. Some of this is for the simple reason that it plays as more of an “action movie” than almost any of the other movies listed above, and, as a result, gives more agency to its lead “Princess” (of course, she is not actually a princess at any point, and the guy she gets at the end is not a prince, just a military commander) and appeals to people that, say, the story of a girl giving up her voice to appeal to a man doesn’t. Perhaps another, more important reason is that the themes Mulan hammers home, regarding not just generic “girl power” but also feelings of not fitting into boxes of gender and cultural norms, are still just as relevant, if not moreso, than they felt in 1998. In Mulan it feels like Disney is taking on bigger themes than it did in many of the surrounding movies, almost by an accident of subject matter. 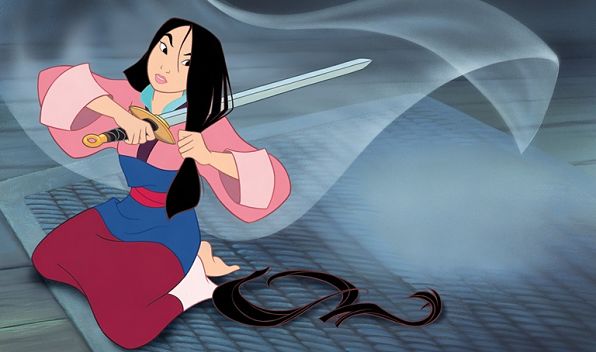 The story of Mulan (the name means “Magnolia” in Mandarin) is apparently based on a Chinese epic poem that dates from the 6th century, though the earliest text we have is from several centuries later. In order to defeat an invasion, the Emperor (voiced by Pat Morita, best known for The Karate Kid), orders one man from every family to fight in the army. In order to save her elderly father from having to fight, Mulan (Ming-Na Wen) masquerades as a man and joins the army, with the help of Mushu (Eddie Murphy), a tiny dragon supposedly sent by Mulan’s family ancestors who provides most of the comic relief. Primarily using her wits, Mulan becomes a big war hero, but is wounded in battle and exposed as a woman. In the third act, she comes back to save the Emperor from the machinations of the villain Shan Yu (Miguel Ferrer) and impress her handsome commander, Shang (B.D. Wong).

Mulan feels more “grown up” than many other Disney movies for a lot of reasons. With the exception of Mulan’s animal sidekicks, the movie is all about humans fighting in a human war with non-magical concerns. It also leans hard into the way the story allows it to explore the different expectations placed on different genders. It’s full of lines like “She’s a woman, she’ll never amount to anything!” It has more naked swimming scenes than every other Disney movie combined, I’m pretty sure. These scenes could play as Tootsie-esque farce, but they don’t. Mulan doesn’t fit in with society’s expectations of women even before she joins the army. Her “I Want” song, “Reflection,” (the one that received a commercial release sung by an on-best-behavior Christina Aguilera) includes lines like “If I were truly to be myself, I would break my family’s heart.” You can see how, of the animated “Renaissance” films, Mulan would be the one that would resonate with LGBT or non-binary viewers.

It is also, for better or worse, something of a shaggy dog compared to the earlier “Renaissance” hits. Both Murphy’s Mushu and his cute “lucky cricket” sidekick are almost entirely extraneous to the movie. Murphy was hired in an attempt to recreate the runaway success Disney had with comedy star Robin Williams as the Genie in Aladdin. Murphy initially refused and only agreed when Disney agreed to allow him to record his part entirely from the basement of his mansion in New Jersey. As for the cricket, it was the idea entirely of Roy E. Disney, Walt’s son, and kept in the movie at the insistence of Disney CEO Michael Eisner, over the objections of pretty much everyone else involved. The cricket was assigned to a single animator, who would later write that he spent the entire production “sitting in meetings and saying ‘where is the cricket in all of this’” and “slipping drawings of the cricket under the directors’ door.” One other strange point is the movie’s villain, Shan Yu, who is barely drawn compared to many other villains of the same era. He is scary looking, wants to kill the Emperor, and has a falcon, and that’s basically all we know about him. The movie doesn’t care about him at all except as a force of nature.

The songs are also, for the most part, forgettable in comparison to the earlier films, and feel as if they are included more out of obligation than anything else. The big exception, and one song everyone remembers, turned out to be the unlikely candidate of “I’ll Make a Man Out of You,” which basically plays over a training montage. As soon as I had the idea of re-watching this movie, it immediately got stuck in my head. I hadn’t even seen the movie yet! It is not only catchy, it hits on the movie’s themes harder than other songs, contrasting Shang’s description of the traits that make a man with Mulan, a woman, becoming an effective soldier primarily through her wits, rather than her physical prowess. While researching for this essay, I discovered for the first time that the main voice on the song is, of all people, Donny Osmond, who provides the singing voice for Shang. The Wikipedia page for this song is a trip, and well worth a read. It includes Men’s Fitness naming it one of the “Greatest Training Montages of All Time,” Daisy Ridley’s public comments that she listened to the song on repeat while training to play Rey in the recent Star Wars films, and Osmond himself calling the song his “greatest achievement.”

Part of the reason that the current iteration of Disney has put so many chips into the basket of a live-action adaptation of Mulan is that the movie is targeted at the burgeoning Chinese market. This is ironic considering the original Mulan was considered a major financial disappointment in China. The Chinese government did not approve the film until a year after its original scheduled release, at which time most of the people who would have gone to the movie had already seen it due to piracy. The Chinese government’s move was seen as a punishment meted out to Disney for the recent live-action film Kundun, which dealt with the life of the Dalai Lama and offended the Chinese government.

If you had asked me before my most recent viewing which of the Disney Renaissance films I most would like to re-watch, Mulan would definitely have been my answer. If asked why I would have answered that Mulan is the “badass” Disney princess. The climax of The Little Mermaid is a kiss. The climax of Beauty and the Beast is Belle saying “I love you.” But the climax of Mulan is her jumping off a roof while a giant explosion happens behind her. However, on this viewing I was struck that the movie does feel more “grown-up” than those other movies, and that adds to the appeal, as well. Mulan may not have been the most successful of its contemporary Disney animated efforts at the time, but the years since have given it the prominence that maybe it always deserved.