Watching On the Waterfront today is, I think, a very different experience than it would have been at the film’s release in 1954, moreso than most of the movies on the AFI Top 100 List. For one, it is difficult to understand how different the naturalistic style, particularly in terms of acting, portrayed in this movie would have seemed from everything else on screens. All of the actors in this movie give great performances, but Marlon Brando’s in particular is credited with single-handedly popularizing “method” acting and inspiring many of the best actors of the next generation. Another major reason is that today it’s easy to miss the context that many people going into this movie would have had at the time, which is that this film is Director Elia Kazan’s direct rejoinder to his critics after he infamously named names in front of Joe McCarthy’s “House Unamerican Activities Committee” (HUAC) two years earlier. Once you’re aware of this, let’s just say this movie is not the most opaque as far as metaphors go.

This movie follows a former boxer (Brando) who now works as a longshoreman in Hoboken, New Jersey, and gets caught up with a corrupt, crime-connected union boss (Lee J. Cobb) for whom his brother (Rod Steiger) works. After Brando unwittingly assists in the murder of another longshoreman who was suspected of talking to the authorities, he is wracked by guilt and romantically interested in the dead man’s sister (Eva Marie Saint). After being subpoenaed by investigators and pushed by an outspoken “dockyard priest” (Karl Malden), he chooses to testify about what he knows, and after being shunned by the other longshoremen and beaten within an inch of his life by the boss’s goons, he is eventually vindicated and succeeds in breaking the boss’s power over the longshoremen.

For about the first half or so of this movie, I was enjoying it perfectly well, but didn’t get anything particularly “special” from it. I had never seen this film before, and all I really knew about it was that Brando informed on the mob and, of course, the famous “I coulda been a contender” scene. What I was not expecting was for Brando and Saint to go on what’s basically just a sweet date for like half an hour’s worth of this movie, though I did enjoy it. But I would say that this a movie that gathers power as it goes on, and I found myself getting goosebumps at some of the scenes near the end. 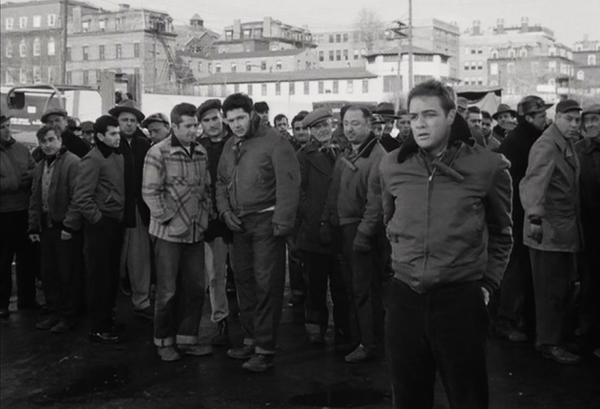 Kazan is known today as perhaps the consummate “actor’s director.” A former actor himself, he made a series of movies about important issues. Prior to On the Waterfront, his best known film was likely Gentleman’s Agreement in 1947, about anti-semitism, which won him his first Best Director Oscar and also won Best Picture. He came out of Broadway theater, and directed the initial productions of such well-known plays as Death of a Salesman and A Streetcar Named Desire, the Broadway production of which gave Brando his big break. He said that he preferred to work with unknown actors because they were easier to mold, and in addition to Brando (in Streetcar) he is credited with discovering Saint (here), Andy Griffith (in A Face in the Crowd), James Dean (in East of Eden), and Warren Beatty (in Splendor in the Grass). Stanley Kubrick once said he was the best American director, and Martin Scorsese would later write an entire book on his films.

But Kazan’s legacy is a complicated one. Having earlier been a member of the Communist Party, he became disillusioned with them after getting into a series of disagreements that reportedly ended with him being “tried” for not being sufficiently ideologically pure in how he ran his theater company. After he was subpoenaed to speak before HUAC, during his testimony he identified eight people as communists, including the playwright Clifford Odets and and several Broadway and Hollywood actors and actresses. In doing so, he effectively ended those people’s careers. He would later claim that all of these people had already been named by others, though this is heavily disputed. He also reportedly told his friend, the playwright Arthur Miller, that “I hate the communists, and have hated them for many years, and I don’t feel right about giving up my career to defend them.” Miller did not remain Kazan’s friend after his testimony.

To be fair to Kazan, he himself would have been blacklisted had he not testified as he did. He was thus placed in what was basically an impossible position. In the end, his career continued, unlike those he had named. When, in 1999, he was given a lifetime achievement Academy Award, he received a standing ovation from the majority of those present, but many others, including Ed Harris and Ian McKellen, pointedly sat on their hands and refused to applaud Kazan. On the Waterfront was Kazan’s first post-HUAC film, and it definitely does feel at times like the all-time most artistic angry social media post about “the haters.” It is, of course, about a guy who is put in a difficult position by an investigative board when he gets subpoenaed, testifies honestly after intense soul-searching, gets ostracized for it, and is then ultimately vindicated and portrayed as a hero. I mean, if you’re going to yell at the haters, it’s probably a lot better to make a good movie about it, rather than making an Instagram video while driving like a pitcher suspended from my favorite baseball team did recently.

The most influential part of this film is likely Brando’s performance. The most famous bit of this movie has always been that scene in the back of a car, when he laments his lost boxing career to his brother with a speech that includes the line “I coulda been a contender!” But his performance is powerful and intense throughout the movie. I figure everybody’s seen the “contender” scene, so here’s a much quieter one of him on his first date with Saint. I think it’ll give you a better idea of what he’s doing all the way through here.

Brando is credited with popularizing “method” acting. In practice this meant his acting was much more naturalistic than the more formal style usually seen in mainstream movies up to that time. Method acting, derived from a “method” or “system” first invented by the Russian acting coach Stanislavsky, has become increasingly popular ever since. It is sometimes erroneously conflated with the actors who remain in character even when not on set (this is a real thing that some actors, perhaps the best known being Daniel Day-Lewis, definitely do, but not the same thing as method acting). One major point of method acting is for actors to cause themselves to feel the same things the characters are feeling in order to create a more realistic performance. For example, if a scene calls for a character to be angry an actor might recall something that made them angry in their own life before starting the scene.

Perhaps the most famous method-related anecdote is from the set of the 1976 thriller movie Marathon Man. Dustin Hoffman, whose character was “on the run,” showed up to set one day completely exhausted. His co-star happened to be Laurence Olivier, among the most acclaimed of “old-school” actors. Hoffman explained that he had stayed up all night in order to get in to the right frame of mind to play his character. Olivier supposedly replied, “my dear boy, why don’t you try acting? It’s much easier.” Anyway, the highest grossing movie of 1954 was White Christmas, and among the competition for Best Picture were Seven Brides for Seven Brothers and Three Coins in the Fountain. Compared to these, On the Waterfront must have seemed like it was from another, grittier planet.

Eva Marie Saint, meanwhile, delivers, in my opinion, just as strong a performance as Brando’s, though she doesn’t get as much credit. Probably because she doesn’t get any scenes where she dramatically limps toward the camera while the music swells. This was her first role in a movie, though she’d been working in TV for a few years. Her first role was on an extremely early NBC show called Campus Hoopla, which she took directly after graduating from Bowling Green in Ohio. Her job there was to recite the commercials. She would go on to a long career that a few years later included Hitchcock’s North by Northwest. As of this writing she is still alive at 96 years old. With the recent passing of Olivia de Havilland, Eva Marie Saint is now the oldest living Oscar winner.

Another element of On the Waterfront that I wasn’t expecting is the super-dramatic score by Leonard Bernstein. This is the only non-musical movie score he ever did, but it still reminds me quite a bit of Bernstein’s work on West Side Story from a couple years earlier. The movie also received three separate nominations for Best Supporting Actor, with Cobb, Malden, and Steiger splitting the vote and the award going to Edmond O’Brien in The Barefoot Contessa.

Seeing On the Waterfront in a theater in 1954 must have been a revelation. Today, shorn of its context, it would feel like a pretty good movie in a world of pretty good movies, if the performance weren’t still so powerful and fresh. Brando’s performance, in particular, remains the most influential part of this movie. Its Wikipedia page is littered with quotes from everyone from Al Pacino to Benedict Cumberbatch saying Brando does the best acting they’ve ever seen in this film. And even in 2020, the crescendoing climax can’t be denied by any but the most cynical viewer.