One of our viewers during the Emergency Election Night Watch Party last night called Airplane! “the silliest movie ever made,” and I mean, I can’t really argue. It is extremely silly. Perhaps its best known line is not one that its writers likely even gave much thought to, but it is maybe the best thing to explain the movie as a whole: “Surely you can’t be serious!” “I am serious, and don’t call me Shirley.” The whole thing is pretty much like that. With a few exceptions, modern viewers are far less likely to have seen many of the movies Airplane! spoofs directly, but large swathes of the comedy are timeless. I had to explain the jokes about Kareem Abdul-Jabbar, vainly insisting that he’s actually an airline pilot named Robert Murdock while a kid asks him about his basketball career, but everyone laughed at “We have to get this woman to a hospital!” “A hospital, what is it?” “A big building with patients in it, but that’s not important right now.”

The directing and writing team known as “ZAZ” (the two Zucker brothers and Jim Abrahams), went to school together in suburban Milwaukee, and eventually formed a comedy troop named, incongruously, “Kentucky Fried Theatre.” Looking to get into movies, they eventually self-financed 1977’s Kentucky Fried Movie, the mild success of which got them a deal with Paramount to make Airplane! on the cheap (if you think about it, the whole movie takes place on like three sets). Disaster movies were all the rage at the time, ranging from The Towering Inferno to The Poseidon Adventure (also starring Leslie Nielsen). An entire series of plane disaster movies under the title Airport were successful at the box office all through the 1970s, which is likely why Airplane! seemed like a good idea at the time. Nobody involved could have realized their spoof would outlast all the things it was imitating. They lifted the plot wholesale from a 1957 movie called Zero Hour, about a former air force pilot with what we today would call PTSD from “the war” who has to take control of a passenger flight after the crew is incapacitated. Nobody has heard of that movie today in any other context. 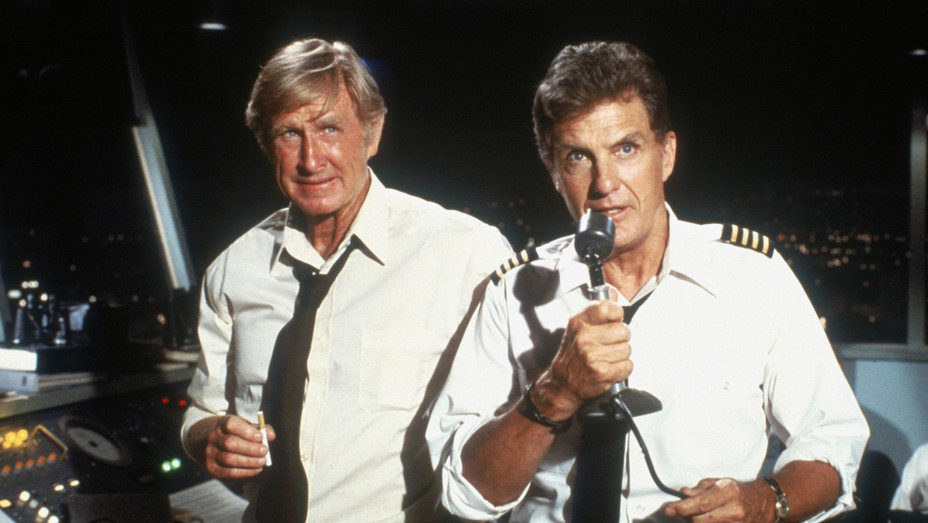 Other than realizing that no gag was too silly, the other big insight of the “ZAZ” team may have been in casting actors previously known for playing serious roles. One of the Zucker brothers went on to direct several of the Scary Movie series, which are not nearly in the same ballpark as Airplane! for numerous reasons, one of which is probably that everyone involved seems far too in on the joke. Peter Graves, the star of the original Mission: Impossible! TV series, plays the original captain of the flight, and reportedly refused to deliver some of his bizarre lines (such as asking a little boy visiting the cockpit, “Have you ever seen a grown man naked?”) until the directors told him that they would be “explained in another part of the movie he wasn’t in.” They are not.

It is almost unknown today, in fact, that up until he appeared in this movie, Canadian star Leslie Nielsen was almost exclusively a dramatic actor. But he had been looking to move into more comedic roles and thought this movie was a perfect opportunity. He went on to star in the short-lived Police Squad! TV series, as well as the ensuing series of Naked Gun movies very loosely based on it, along with several other similar spoofs. Mel Brooks, for example, cast him as the lead in Dracula: Dead and Loving It. The key to his appeal, I think, is how good he is at taking ridiculous things seriously. I haven’t seen all his movies, but I don’t think I’ve ever seen him laugh on screen. Yet he is completely game for some extremely dumb bits in his role her as a doctor, like the one where he takes a series of eggs out of a sick woman’s mouth, which seems to take forever. At the time, people asked him about “playing against type,” but he told them that, in fact, he had always been a comedian, and he had been cast “against type” in all his previous roles, instead.

Other cast members you may recognize include Robert Stack, as the new pilot’s old commander brought in to help talk him down who had been in a series of similar movies but is likely best known today for his long-time hosting gig on Unsolved Mysteries, and Lloyd Bridges, as the comically busy air traffic controller whose habits of choice escalate throughout the movie (he starts at “This was a bad week to quit smoking,” and ends on “This was a bad week to stop sniffing glue.”). The “romantic” pair at the center of the movie are Robert Hays as the nervous pilot and Julie Hagerty as his ex-girlfriend/stewardess, both of whom were in their first movie roles (he had been a regular on a sitcom called Angie). He mostly went into voice acting, while she has had a long series of smaller comedy roles that most recently included appearing as a stewardess in a series of Old Navy commercials and a recurring role in a TV show I’ve never heard of as “Madame Rhonda, Pet Parapsychologist.”

One thing a modern viewer might say about Airplane!, for better or for worse, is that many of the jokes feel slow compared to the modern version of something like this. If you watch, say Superhero Movie (directed by another member of the team), there are barely any serious lines in the whole thing. Airplane! commits several minutes early on to a parody of Saturday Night Fever that mostly involves increasingly silly dance moves. Yet where it maybe works the best is in the running jokes it keeps coming back to, like the two Black guys talking “jive,” translated through subtitles. Eventually a flight attendant brings in none other than Barbara Billingsley, the mom on Leave It to Beaver, to translate. And, unlike those more recent, extremely dumb parodies, there are plenty of jokes that work entirely independent of spoofing other movies. The bit where Hagerty’s flight attendant delivers a long, calm message to the passengers over the intercom, then adds in, almost as an afterthought, “Oh, by the way, is there anyone on board who knows how to fly a plane?” is one of my favorite parts.

As I’ve said, Airplane! has far outlived many of the movies it references. The American Film Institute eventually named it the tenth best comedy of all time, while the British Film Institute is even more enamored with it, naming it the second funniest movie ever, after The Life of Brian. There may be an argument that “ZAZ”’s absurdist brand of humor is more in tune with that of the British than with the American. It certainly continues a very specific brand of comedy that you see pop-up even today on both sides of the pond.