Star Trek is one of those cultural things that now exists outside of any of its individual iterations, which is how we ended up with Galaxy Quest, which takes all of the generalities but none of the specifics, and ends up in a comedy that lots of people love whether they’re “Trekkies” or not. Every year in Las Vegas (before COVID) there was an annual Star Trek convention. At the 2013 edition, there was a vote taken among the fans to rank the twelve Star Trek movies up to that time. Galaxy Quest received so many write in votes, it came in 7th. It’s not really great art, it’s just a good idea done well with a fun cast, which is all you really need.

The movie is about a bunch of actors who were, many years earlier, in a cult-classic science fiction series called Galaxy Quest that, you guessed it, is basically Star Trek with the words switched around. All the rest of them deeply resent Jason Nesmith (Tim Allen), who played “Commander Taggart.” He is outwardly jovial but inwardly a complete mess. But one day what he thinks are more nerds who want help with their fan film turn out to be a bunch of actual aliens, the Thermians, who have seen all of the reruns of Galaxy Quest out in space and assumed them to be “historical documents.” Suddenly all the actors are confronted with an actual version of their fake spaceship and forced to fight real battles in it. 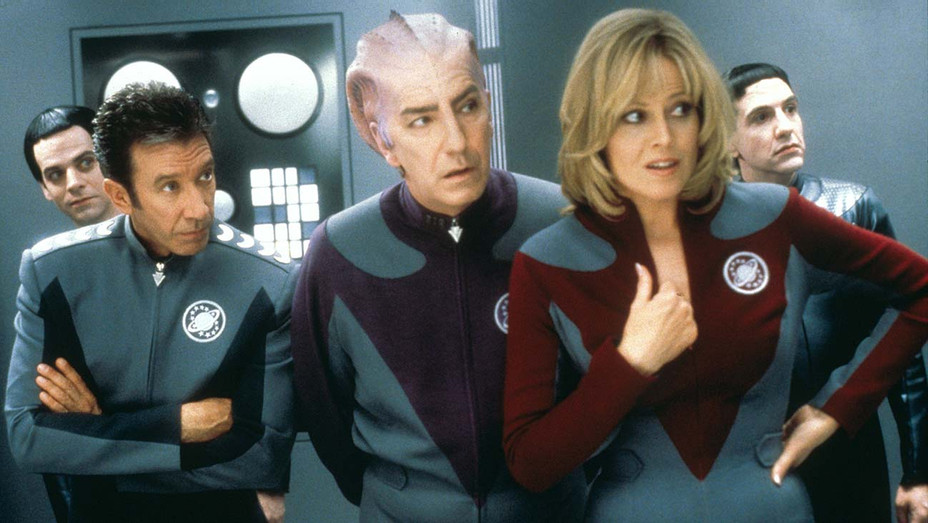 If this idea seems very silly, it is, but that is a big part of why it’s funny, and the material is also elevated by a really top-notch cast. In addition to Allen, sci-fi vet Sigourney Weaver stars as the communications officer who, for indiscernible reasons, wears a uniform with a much lower cut in the chest than the others crew members. Alan Rickman plays a former Shakespearean actor who is nearly suicidal from the fact that the definitive role of his career is playing the Spock-esque “token alien” member of the crew (“By Grabthar’s Hammer!”). Tony Shalhoub plays the sardonic engineer who seems more bemused than surprised by the crazy developments of the plot. Daryl Mitchell (a former rapper who had played a small role in House Party) plays the grown-up version of the Wesley Crusher-ish child prodigy navigator. And Sam Rockwell, in one of his earlier roles, plays a former single episode “redshirt” cast member who happened to be at the same convention as the crew and now finds himself caught up in things he can’t handle.

Over time the cast went from good (Allen, Weaver, and Rickman were all stars at the time) to absolutely insane, as many of the actors in smaller roles, like Shalhoub and Rockwell, went on to become much bigger stars based on their later roles. This phenomenon persists way down the cast list, which includes both Justin Long (as a “Quester” who helps the erstwhile crew with his encyclopedic knowledge of their ship) and Rainn Wilson (as one of the Thermians) in their first feature film roles. For the vast majority of the crew, however, Galaxy Quest is by far the best-known film of their careers in retrospect. This statement would certainly apply to director Dean Parisot, whose second-best-known film (Bill & Ted Face The Music) likely just came out. He was hired during pre-production as a last-minute replacement for Harold Ramis, who for reasons that are unclear vociferously disagreed with the same casting choices that proved so fortuitous.

It’s not the sort of thing that requires great analysis, but Galaxy Quest works very well for a few specific reasons. One is that it is a parody that loves and respects its own source material. Parodies don’t have to, I’d say (I’m not sure that Airplane! or The Naked Gun have a great deal of love for disaster movies or cop thrillers, respectively), as long as they’re funny, but Galaxy Quest isn’t just a parody of Star Trek itself, but the culture around it. It of course cracks jokes at the expense of “Questers,” but it seems to love them in the end. One way to describe the character arcs of this movie is to say that these actors start out resenting their fans as a bunch of nerds and end up learning to appreciate them. The movie works by not just parodying its subgenre but by being a fairly decent example of it in its own right. Hence the ranking among actual Star Trek movies.

I saw Galaxy Quest in the theater back in 1999, but it did not initially make a big splash at the box office. It actually gained in box office over the course of each of its first several weekends of release, a rarity certainly caused by positive word of mouth. The head of its studio, DreamWorks (studio co-founder Steven Spielberg reportedly had a cursory involvement in the movie, including suggesting that Missi Pyle’s role as one of the aliens should be greatly expanded because he liked the actress), Jeffrey Katzenberg, would later personally apologize to Parisot for the studio’s failure to properly market his movie. I have never heard of that happening with any other film. In any case, while other movies that made more money at the time are likely now forgotten, Galaxy Quest remains popular and fondly remembered, and is now available on both the Amazon and Paramount streaming services.

I had a particularly good time going down the Wikipedia rabbit hole on this one, so I’ll close with a few of those revelations. One is that Missi Pyle, who plays the most prominent female Thermian in her first major movie role, not only went on to a pretty good career, she eventually married naturalist and Expedition Wild host Casey Anderson. The “Best Man” at their wedding was Anderson’s pet bear. The pair later appeared on an episode of Dog Whisperer about their dog, then divorced in 2013. Also very involved in animal work is Rainn Wilson, best known today for playing Dwight Schrute on The Office (he also went on to land an actual recurring Star Trek role, playing Harry Mudd on Star Trek: Discovery). According to his Wikipedia, he and his wife, short story writer Holiday Reinhorn, live with “three pit bulls, Oona, Pilot, and Diamond, two Vietnamese pot-bellied pigs, Snortington and Amy, a donkey named Chili Beans, and a ‘zonkey’ named Derek.” Today I also learned that a zonkey is a cross between a donkey and a zebra.