Mel Gibson is one of those white men who has gotten way too many chances over the years. In the mid-90s, he managed to secure over 60 million dollars in independent financing for a three-hour epic about a 12th century Scottish rebel which he both directed and starred in. The movie became a huge hit and won the Best Picture and Best Director Oscars. The movie is credited by at least some analysts with reviving Scottish nationalism, to the point there have since been referendums about independence from the United Kingdom, as well as bringing a huge surge in tourism and public interest in Scotland, even though Gibson himself was born in America and raised in Australia (partly because his father, who had an Australian grandmother and was thus allowed into the country, was worried his older sons would be drafted for the Vietnam War). It has also topped lists from various movie websites of the worst Best Pictures of all time and of the most historically inaccurate movies ever made.

Since Braveheart hit theaters, Gibson has used his resulting cache to make two movies in ancient languages (The Passion of the Christ and Apocalypto), as well as the war movie Hacksaw Ridge, for which he received a second Best Director nomination. In the meantime, he spiralled into alcoholism (once telling his friend the director Richard Donner that he “drank five pints of beer for breakfast”), culminating in his infamous drunk driving arrest that for some reason involved him ranting about Jewish people and how they’re “the cause of all the wars in the world.” He also went through more than one extremely acrimonious divorce proceeding, during which time voicemails he left for one wife, Russian pianist Oksana Grigorieva, which included shouting that he hoped she got raped by n-words, were entered into evidence. I say all of this not out of lurid curiosity, but to note that despite all this, Gibson is still working in Hollywood, has numerous, inveterate defenders, and remains rich and famous. That’s still where we are.

So, to Braveheart as a movie. For the most part, I don’t have a great deal of animosity toward it, but that’s about the best thing I can say about it. It takes a fascinating period in history and is uninterested in giving any complexity either to its hero or its villains. Gibson’s William Wallace’s rallying cry is “Freedom!” but nobody involved seems to have ever actually considered what this actually means. The story is, sort of, the story of a Scottish rebellion against the rule of the English King Edward II (Patrick McGoohan, known almost exclusively to me from The Prisoner). In the movie, Wallace is a commoner motivated to rebel after his wife (Catherine McCormack) is murdered by the English (in reality he was a nobleman). He leads the Scots to victory at a curiously bridge-free version of the Battle of Stirling Bridge, has a somewhat bizarre, in my opinion, affair with Prince Isabella (Sophie Marceau), and is betrayed and then captured by the English and then executed. 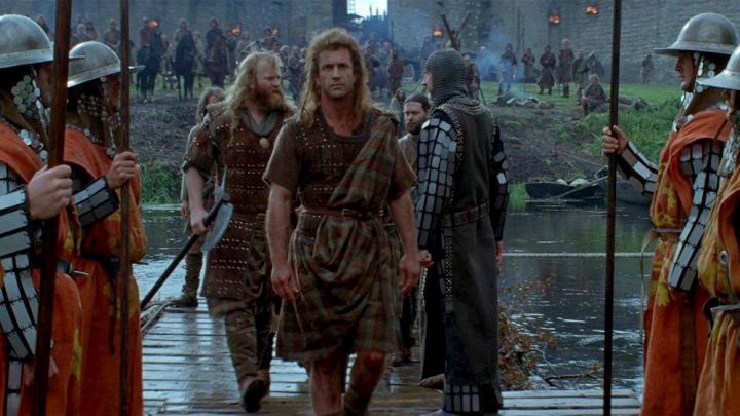 At the end of the three hours, my biggest problem is that I’m unclear on what the point of any of this is. I’m not sure I’ve ever seen a less nuanced movie, and yet I’m still not left certain as to what it’s trying to say. Gibson’s hero never changes, he never has a single moment of doubt. He inspires men to action and seems irresistible to women. Meanwhile, there is no attempt to portray any of the English as anything other than irredeemably evil, rapists and torturers. Gibson is uninterested in the actual reasons for the historical rebellion. In the movie, we watch the English invoke the right of “prima nocte,” the idea that lords could sleep with the wives of their subjects on their wedding night. This is a historical myth, not something that ever happened. But Gibson wants his bad guys to be guilty of the worst things he can think of, in this case sleeping with other dude’s wives. The problem is that, when Wallace yells “freedom” at the end of this movie just before dying, what is he asking for “freedom” from, beyond, you know, not being serial killed by psychopaths after they bang your wife? I have no idea. Even the Robert the Bruce’s father (Ian Bannen), seen here as conniving snake willing to sell out anyone for power, is shown as decrepit and disfigured by what I think is supposed to be leprosy, though of course there’s no historical evidence for this. He’s a bad guy, so Gibson thinks he should be ugly, too.

The movie’s battle sequences, particularly the lengthy central Battle of Stirling Bridge, are perfectly fine, though perhaps more impressive at the time than now. Even six years later, the Lord of Rings trilogy’s battles are far more impressive, and had far fewer guys getting shot in the butt with arrows while they were mooning the enemy. We do get a sense of the incredible dinginess of the middle ages, this might have been among the muddiest and grungiest movies made up to this point. Today, this “gritty” view of history has become passe, but here it felt like something new. It is hard, however, to praise the historical “accuracy” of a movie that has its heroes wearing kilts despite the fact that they were not a thing for many centuries after this.

Even as someone with an interest in history, I’m not someone obsessed with historical accuracy. That’s why it’s a movie and not a documentary. There is something to be said for putting historical events into a digestible story so we can understand them better than we might just reading a direct recounting of what happened. This is not that. Most of the people involved are actual historical figures, but that’s about as far as it goes. For one, Princess Isabella and William Wallace, seen having an affair here, would never have met, she was three years old at the time of his death. When she whispers in the ear of the dying king that she’ll come back and overthrow his son with a child that isn’t his, that really is something the historical Isabella did, but it was many years later with a nobleman named Roger Mortimer, not William Wallace. And that’s not even getting into all the smaller details the movie has no interest in getting right. 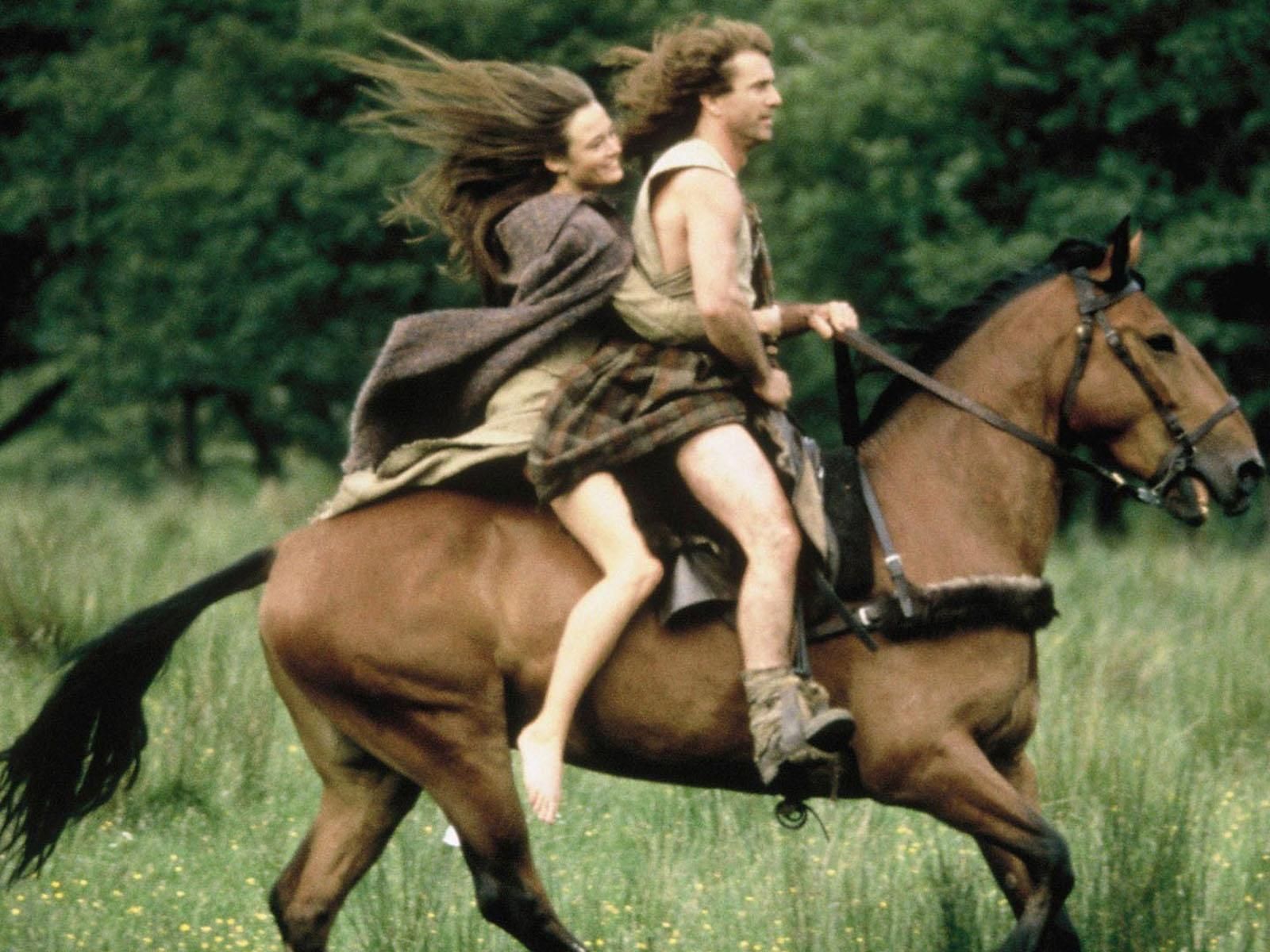 Putting aside my various whitterings, why do we think Braveheart has been such a success, with an influence far beyond the walls of the movie theater? For one, it seems like it would play very effectively as propaganda. If you buy into the basic premise that the movie is telling you the truth, or a truth anyway, it is very effective at making you like its heroes and hate its villains. I also think that Scotland has an inherent charm, even amid the mid-90s grunge. I think that most historical epics could benefit from giving most of the main characters thick Scottish accents of varying reliability, and showing them marching past the snow-dappled Cairngorns. And of course there’s a certain element of wish-fulfillment. After being betrayed at a later battle by a Scottish nobleman (Alun Armstrong), Wallace rides his horse into the guy’s bedroom and bashes his face in with a flail (we see the smashing in close up). At first I thought this was a dream, that the guy was feeling guilty about betraying Wallace, but the movie is serious about it. It has no sense of what’s ridiculous and what isn’t.

I’m not saying don’t watch Braveheart because of Mel Gibson. I think you should go into it with that context, but I think the movie has to stand or not stand on its own merits, and I don’t think it does. Many similar, better movies have been made covering similar ground over the years. You can currently find The Outlaw King on Netflix, starring Chris Pine as Robert the Bruce, in which Wallace is mentioned but never seen. That movie’s climactic battle is just as muddy, medieval and interesting as the battle here, the movie has the exact same villains but spends more time actually rounding them out, Pine’s character is far more interesting than Gibson’s here (though his accent is, if anything, more dodgy), and the history is far more accurate. So I would recommend maybe trying that instead.