The final entry in our Forgotten Best Pictures Virtual Film Festival is 1987’s The Last Emperor. There was much discussion last year of Parasite being the first non-English Language film to win Best Picture, but while this movie is mostly in English, it was shot primarily in China, with a primarily Chinese cast, directed by an Italian, and completely independently financed by a British producer. The Last Emperor has, in the years since, found itself lumped in with a series of a specific type of Oscar movies of its general era: large, long, mostly serious historical dramas, most of which are not remembered as being the actual best movies of their individual years by a majority of the populace, such as Gandhi, Out of Africa, Dances with Wolves, Braveheart, and The English Patient, all of which won Best Picture over the course of about 16 years. This remains what a lot of people today think of as an “Oscar movie,” though I would say it is mostly a phenomenon specific to the 80s and 90s, at least in terms of awards love. However, among these The Last Emperor feels like the most “outside the box” choice. The rest of those movies are about heroes, or romance, or both. However, The Last Emperor is almost entirely about decay and the end of all things. Its hero is, for the most part, entirely tangential to history.

The biggest reason to watch The Last Emperor is its status as the first film ever granted permission by the Chinese government to film on location in the Forbidden City, which it uses as a backdrop for more than half of the movie. Combined with many thousands of extras, it gives the movie the same sort of sheer human scope and grandeur that you might recall from, say, the ceremonies at the 2008 Olympics. The hair styles alone are completely insane. The point of all that splendor, however, is to both show how hollow it all is and to contrast it with the settings of other sections of the film. We quickly figure out (though nobody explains anything) that the movie is being told in a flashback structure, from the perspective of Pu Yi as he sits in a bleak prison run by the Communist government. In between, we watch as he and his “family” haltingly attempt to integrate themselves into the Chinese version of the “Roaring 20s” lifestyle. Because life inside the Forbidden City remained unchanged for so long, and then China went through such a long string of changes, it feels as if Pu Yi lives through several centuries instead of several decades. 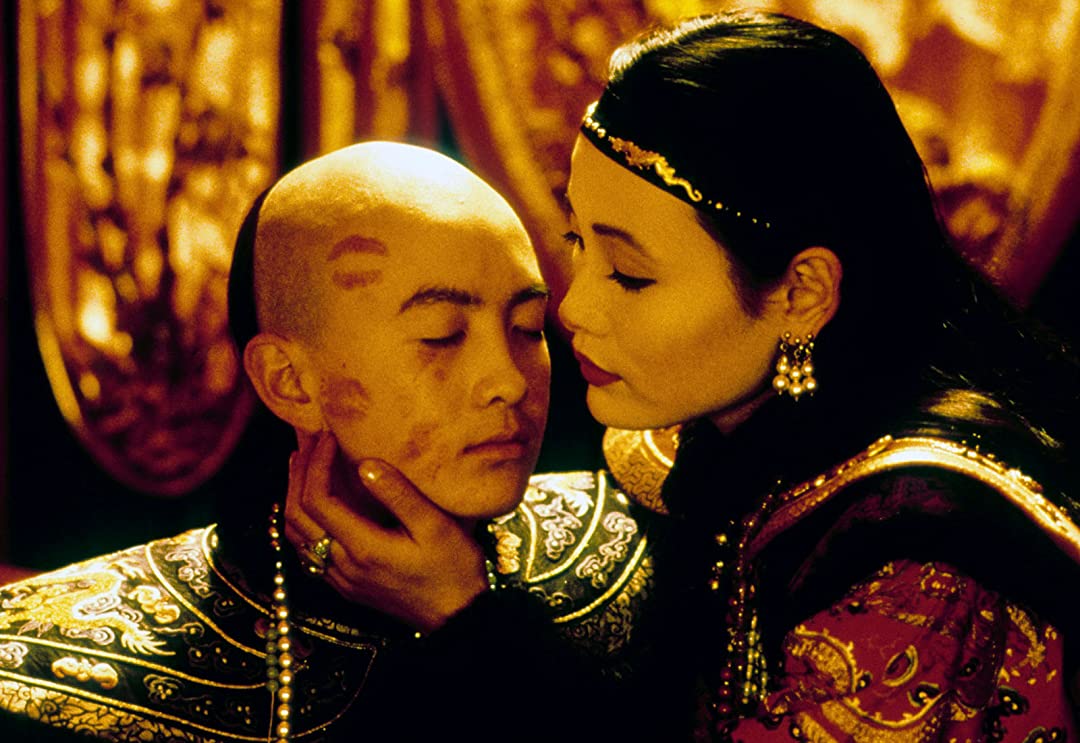 Pu Yi is inaugurated as a child in 1908, and was technically deposed in 1912, though he continued to live inside the Forbidden City and things continued mostly as they had been until he was expelled following a coup in 1924. He then lived in exile in the city of Tianjin until 1934, when the Japanese decide to install him as “Emperor of Manchukuo” (the Japanese name for the puppet state they set up in Northeastern China prior to World War II). He is frustrated by his lack of actual power, while his beautiful wife (Joan Chen, perhaps best known today for her subsequent role on Twin Peaks) becomes addicted to opium, gets pregnant by his driver, and then the baby is killed by the Japanese. His attempt to flee to Tokyo to escape advancing Communists at the end of the war fails, and he is captured by the Red Army.

After a movie’s worth of arguing about whether he collaborated with the Japanese (he insists to his captors that he was “kidnapped,” but we see clearly in flashbacks that he went to Manchuria willingly, over the arguments of everyone around him), he is pronounced “rehabilitated” and released from prison in 1959. In the final scenes, he watches the Cultural Revolution happening around him and returns to the Forbidden City as a tourist. 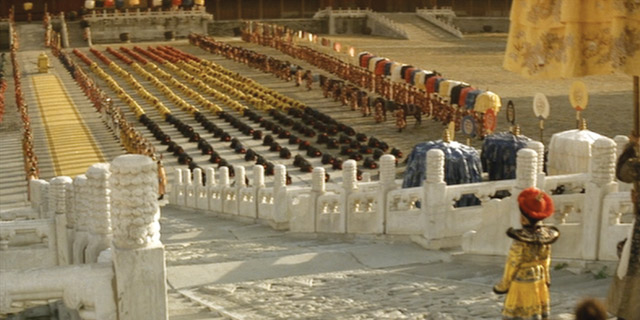 The movie’s biggest “flaw,” if you want to call it that, is that Pu Yi is affected by history, but he is not actually part of it. Things tend more to happen to him than he actually does things. He is interested in the West, occasionally to the point of obsession, and he is conceited and disconnected from society around him in the same way royals have been throughout history, though in his case it’s particularly sad. However, none of these traits actually substitute for having agency or a personality. I get that a big part of the point of his character is that any agency he ever thinks he has is an illusion, but this is too long a movie to keep that up as an interesting idea. I also don’t think it helps that, because Pu Yi is shown over the full course of his life, he is played by several different actors. The Chinese-American actor John Lone plays Pu Yi as an older man, so he gets the most screen time and top billing, but three other, younger actors play the part for non-insignificant sections of the movie. The four different actors never really succeed at bringing some larger arc to the character.

Director Bernardo Bertolucci was an Italian who had risen to international prominence over the previous couple decades with a series of iconoclastic and often controversial productions. In 1972, he directed Last Tango in Paris, in which Marlon Brando and Maria Schneider engage in a series of sexual encounters so explicit that Bertolucci had criminal charges brought against him Italy that resulted in his “civil rights being revoked” for five years and the film ordered destroyed (though since it was already making a profit in mass release in America, what this was actually supposed to do was unclear). It was eventually clarified that three copies of the movie could be kept in the Italian national film library, on the condition that they not be viewed. He went on to direct 1900, a historical epic set in Northern Italy in the titular year, which, at 317 minutes, is in the conversation for longest commercially released film of all time. It also features lots of very explicit sex, including a scene where Robert De Niro and Gerard Depardieu get tandem handjobs. 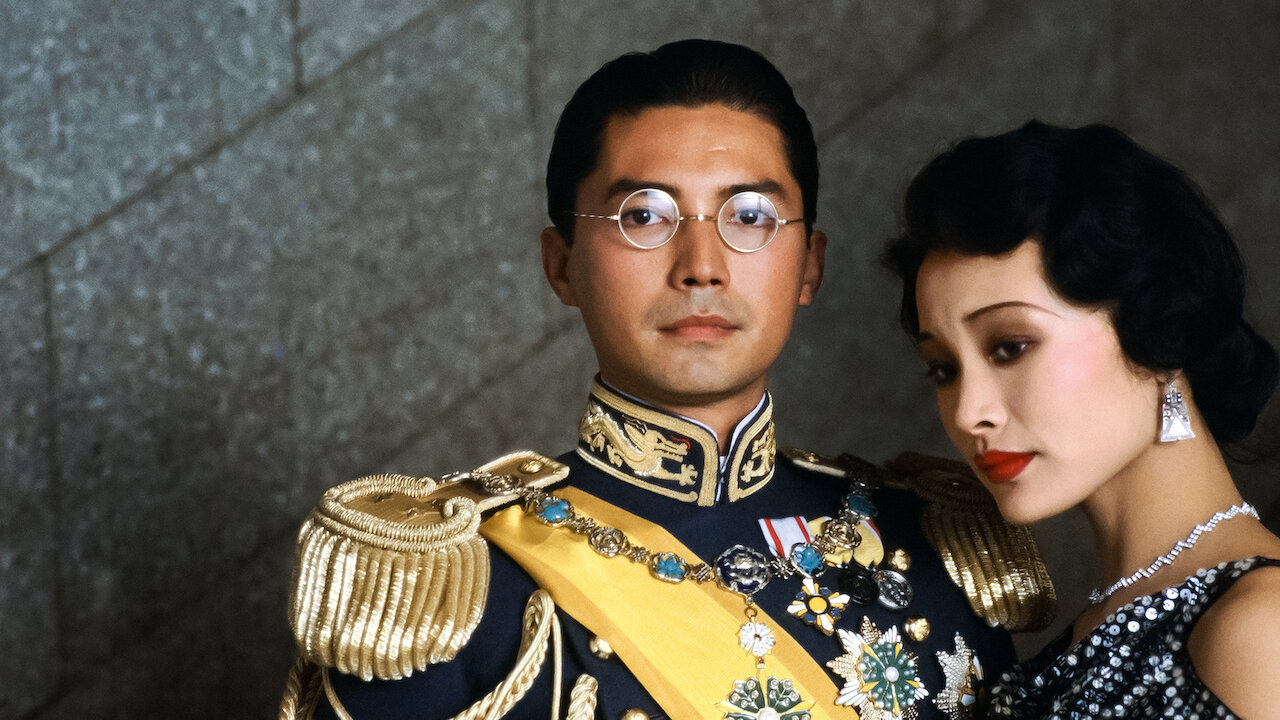 The Last Emperor is relatively mainstream compared to these movies, though there is a weird sexual undercurrent in some scenes that you get the sense that most Americans this side of David Lynch would not have brought to this material. We see that Pu Yi continues to breastfeed with his wetnurse into his teens, which we learn from a long scene where we watch him do so, cut to various ladies of the court watching him do so through opera glasses, then cut back to him doing so, etc. There’s another scene where the admitted Japanese spy Eastern Jewel (Maggie Han) sucks on the toes of the emperor’s opium-addict wife. “I hate you,” she says. “That’s because only I can give you what you need,” Eastern Jewel purrs. I mention this stuff because it’s part of what sets The Last Emperor apart from ten other three-hour movies. It was made by a weird Italian guy with some very particular interests, along with more money and access than he knew what to do with. Yet it also all ends up feeling pretty extraneous to the actual plot of the movie.

At the start of The Last Emperor, the splendor of the Forbidden City feels ancient, intractable, unknowable, and insane. We meet the Dowager Empress Cixi (Lisa Lu) on her bed with her Pekinese, pushed around by dozens of retainers. The new Emperor Pu Yi is greeted by a seemingly endless sea of bowing supplicants, which he has no idea how to react to because he is eight years old. But the purpose of this whole thing, what Bertolucci seems to have seen in the material, is the way it all descends into hollow madness. By the end, Joan Chen’s character is reduced to a skeleton of her former self by drugs and grief, spitting into her husband’s face. When Pu Yi is inaugurated as Emperor of Manchukuo, he performs an elaborate ritual giving homage to the elements, but rather than the opulence of the Forbidden City he is surrounded by desolation, factories, and smokestacks. “You are an empress again,” Eastern Jewel whispers to Joan Chen, “but I am going to be a pilot.” The life of Pu Yi is fascinating because he lived to see his own childhood become a remote, ancient past, its decaying remnants visited by throngs of tourists. If the movie becomes tiresome by about halfway through, which I’d say it does, it’s because he doesn’t actually have to do much over the course of the movie except stay alive.