Battleship Potemkin was created, expressly, as a lavish Soviet propaganda film. Not normally something that would be in regular rotation among today’s movie buffs. On seeing the thing, most Western governments were worried, not about its cinematic merits, but that it would be too good as its job. Potemkin was banned in Britain, for example, for decades, longer than any other film. Yet it also remained in the Top 10 of the “greatest film” poll of Sight & Sound (the publication of the British Film Institute) for fifty years, until it dropped all the way to #11 in 2012. The reasons for that are pretty simple. When you watch it today, Potemkin plays like a modern movie, in terms of shot construction. Sergei Eisenstein was just as much a “theorist” as he was a director, writing article after article describing his thoughts about angles and editing. With this movie, he put many of those theories into practice. There are scenes near the end that feel like the action sequence, in a modern sense, being invented for the first time.

This is a work of Communist art, in more than one sense. It is much more about collective action than it is about characters. The only character really drawn to any degree is that of Vakulinchuk (Aleksandr Antonov), and even in that case, most of his lines have words like “brothers,” “comrades,” or “mates.” We get more than one shot of a villainous Tsarist naval officer literally twirling his mustache. I’m not sure I’ve ever seen anyone do that unironically in any other movie. Subtlety is not the goal here. 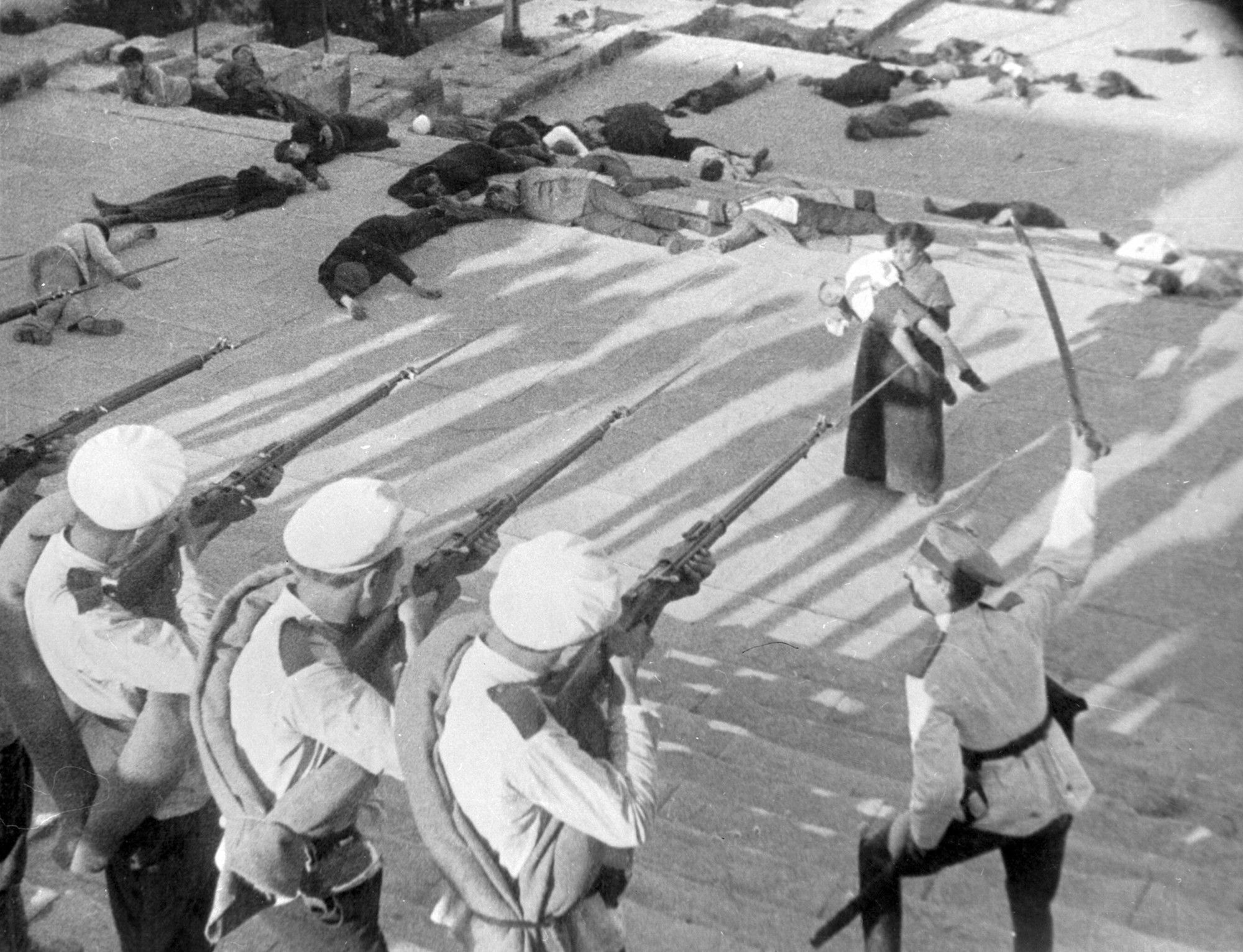 The story is a highly fictionalized account of an incident during the Russian Revolution of 1905 (which was not successful in deposing the Tsar but did result in some other reforms, such as the initial institution of the Duma). The crew of, you guessed it, the Battleship Potemkin, mutinies in the Black Sea against its officers, after the crew refuses to eat meat with maggots in it. Just as the crew achieves victory, the leader of the mutiny, Vakulinchuk, is killed. The ship pulls into the nearest port, Odessa (in what is today part of Ukraine), and Vakulinchuk’s body is paraded through the streets, whipping up the populace. This leads to the part of this movie everyone remembers, when the Tsarist troops march onto the “Odessa Steps” and massacre everyone there. This sequence is credited with being one of the first really successful montages. If a modern movie made the same shot choices in an action sequence, their audience wouldn’t think twice. It is considered Eisenstein’s masterpiece. In the final section of the movie, the Potemkin moves to fight several other ships that the Tsar has sent to stop them, but at the last second the sailors on those ships refuse to fight and join in the mutiny. The music swells, and “The End” flashes, conveniently leaving out the part where the revolution was put down.

I don’t know if you’ve ever seen a picture of Sergei Eisenstein, but he definitely looks the part of a mad genius. Here, he basically invented the techniques of cutting quickly between different perspectives to tell a larger, emotional story, particularly in order to generate excitement. I’d seen Potemkin before, but this time I was particularly struck by the way he’s editing actual, exciting action sequences, in 1925. He was ahead of his time in other ways too. The movie is obviously black and white, but even among audiences friendly to its message, it was often seen as too gory. Movies in the West at this point weren’t splashing around nearly as much blood as Eisenstein does here, particularly in the massacre scenes. In a less famous, earlier scene, when the Captain threatens to hang the rebellious crew members from the ship’s yardarm, they look up to see ghostly visions of themselves, hanging there. 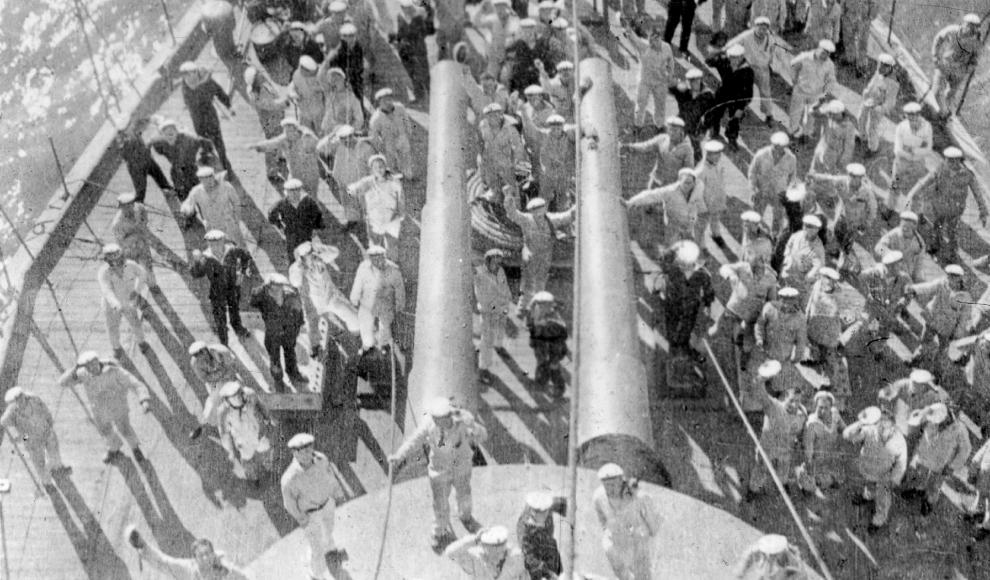 But while I praise the film’s construction, its absolute insistence on political drama over personal drama now seems to fall a bit flat. Far more of the time than you’d usually see, Eisenstein is interested in masses of humanity moving in unison, bankrolled by a Soviet government interested in promoting the 20th anniversary of the 1905 rebellion. There just aren’t any characters to balance things out. Consider Titanic, for example. Had Eisenstein been making the movie instead of Cameron, he wouldn’t have bothered with Jack and Rose. It would have been all sinking, all the time.

But even in its home country, Potemkin could not escape the political winds. The movie originally opened with a quote from Leon Trotsky, but when he fell out of favor Eisenstein quietly replaced it with a quote by Lenin in all the prints, and that is how the version you’ll find today still is. Within a few years, his vision of editing had fallen out of favor with the Soviet authorities, who emphasized a “state style” of “social realism.” Eisenstein was forced to publish a handful of “self-critiques,” but managed to stay out of the gulag. He made the transition to state-sanctioned sound films, and shortly before his untimely death from a heart attack in the 1940s made a three-hour historical epic, Ivan the Terrible, at Stalin’s request. You’ll find that movie today occasionally on “greatest movie” lists, as well. But Stalin, who seemingly wasn’t aware of the “Terrible” part, was reportedly offended by the character’s depiction in “Part II” of the movie, and though finished it was not released until 1958, after Stalin’s death. If you’re curious, Roger Ebert once said that Ivan the Terrible was “epic in scope, awesome in visuals, and nonsensical in story. It is one of those works that has proceeded directly to the status of Great Movie without the intermediate stage of being a good movie.”

And thus Battleship Potemkin is doomed, perhaps, to always be required viewing for film students without really capturing their hearts. Yet, as the British government feared, the scenes of the populace being attacked by Tsarist troops on the steps retain their ability to grab the viewer by the throat. Any time a movie can do that nearly 100 years after it was made, it’s worth checking out.