Footloose feels more honest, at least for stretches, than many movies about teenagers. This feels like a surprising thing to say, given that I would say about a third of this movie wishes that it were a music video, and in fact was made into a whole series of music videos. But those bits are sufficiently joyful (or angry, in the case of Kevin Bacon’s angsty ballet in an empty factory) that I’ll certainly forgive them, and the rest of this movie is about teenagers in a small town that feels more concerned with oppressing them than anything else. There are like four or five times in this movie when various teenagers risk their lives, seemingly just to feel something. The crucial event of the movie’s backstory, we eventually learn, is when two cars full of teenagers went off a bridge because they were playing “highway tag,” whatever the heck that is.

This movie was originally the brainchild of Dean Pitchford, a songwriter who was coming off winning an Oscar for writing the title track in Fame. It is basically a musical in which nobody actually sings, though there are multiple dance numbers that don’t seem to take place in reality. Pitchford wrote lyrics and then worked with a variety of current artists on the various songs. You are likely aware of the toe-tapping title track by Kenny Loggins, which plays a minimum of three times over the course of an hour and a half. But I think that, if you’re my age, this movie will have a lot more songs you recognize in it than you’ll realize. “Holding Out for a Hero” by Bonnie Tyler, “Girl Gets Around” by Sammy Hagar, “Let’s Hear It for the Boy” by Deniece Williams, and “Almost Paradise” by Loverboy all originate from this movie.

The movie those songs are hung on stars Bacon as a teenager who moves from Chicago with his mother to a small town somewhere near tall mountains (it was mostly shot in Utah). There’s never a big scene where they explain why they moved, but it’s vaguely implied that his dad died. The town is very religious, to the point dancing and rock music are banned by law (this seems unconstitutional, but it is also something that definitely happened in some rural towns in America, even into the 1980s). The movie opens with the local minister (John Lithgow) giving a fiery sermon against rock’n’roll. Anyway, Bacon’s “gotta dance,” to quote Gene Kelly, while also falling for the preacher’s daughter (Lori Singer). She is willing to do absolutely anything to rebel against her dad, seemingly up to and including dying doing something dumb.

Despite the parents being so strict about their kids, to the point of silliness, the kids seem… pretty normal. They smoke weed, they drink, they make out. The parents are living in a crazy fantasy world, and all they’re doing with all their work is making sure their kids are as miserable as they are. It’s important to note that the movie’s problem, really, is more about small towns and their fear of change and the unknown, and less about religion. In one of the key scenes of the movie, Bacon’s character tries to make a speech to the town council (which unsurprisingly includes Lithgow’s preacher), arguing that the law be changed, but he knows enough not to just go in and argue that dancing is fun and they should do it. Instead, he quotes from the Bible, about King David dancing to praise God. And it’s Lithgow’s character who has the final change of heart, who in the end really does want to do the right thing. But in the first five minutes, Bacon makes the mistake of saying how much he likes Slaughterhouse-Five by Kurt Vonnegut. Most parents would be thrilled, but that just gets him angry stares here. That’s not about religion. That’s about tribalism.

The biggest weakness of the movie, for me, is that everything turns out OK. Lithgow finds a bunch of parents burning books at the library and yells at them, then approves the dance. Bacon and his doofus friend (played by Chris Penn, Sean Penn’s younger brother) get into a fight outside the dance, and I genuinely thought “oh, they’re blowing their big victory,” but the movie doesn’t care about that. They get to stand over the prone bodies of the assholes they just beat up and cheer, then go dance. By that point, the movie has fully transitioned over to music video. 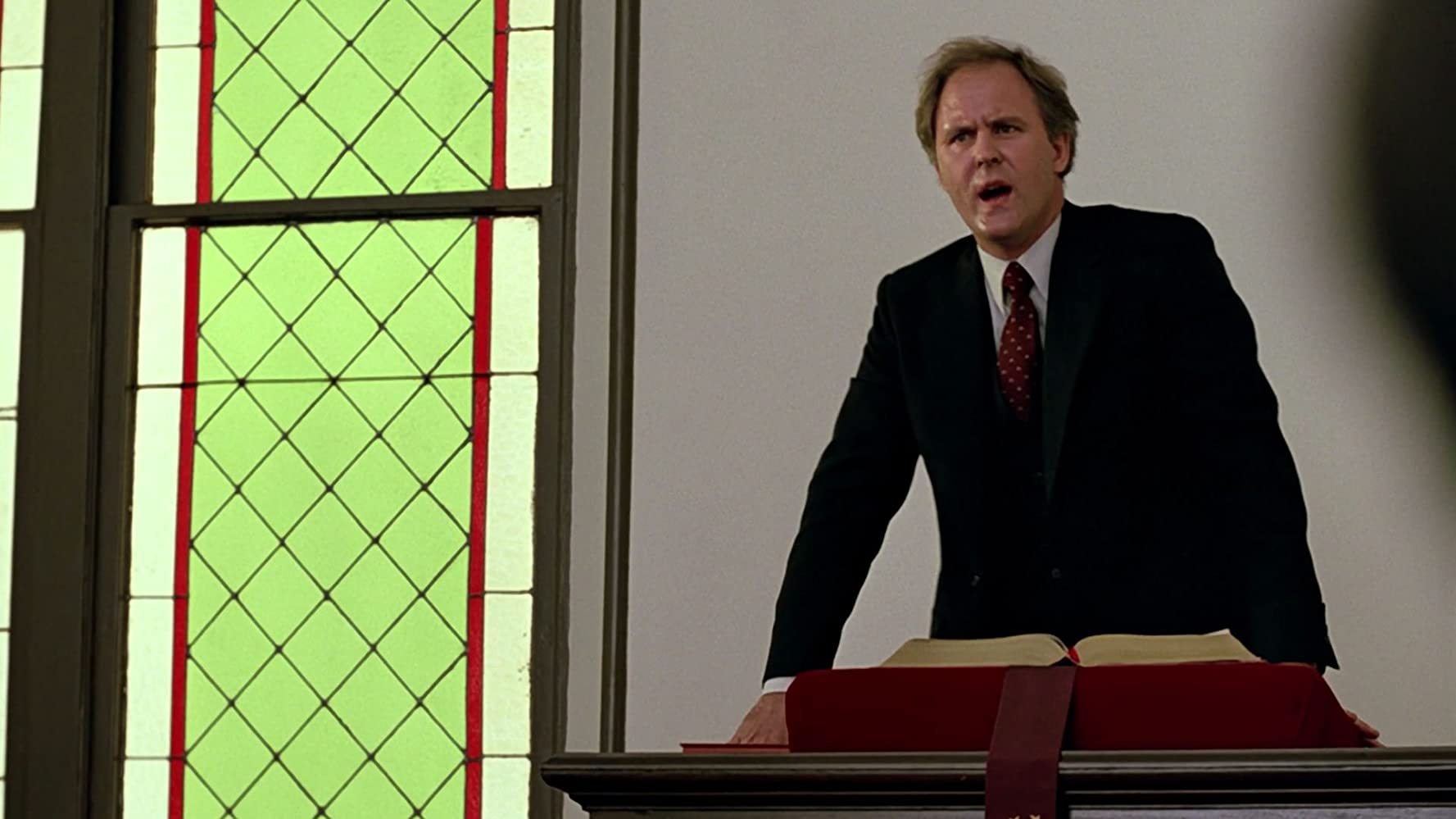 Bizarrely, Footloose was initially to be directed by Michael Cimino, the Hollywood problem child behind The Deer Hunter and Heaven’s Gate, who was persona non grata by this point and trying to resurrect his career. He lasted a month into shooting, which couldn’t have been a small percentage of the final movie, but Paramount just couldn’t deal with his nonsense and fired him. The remainder of the movie was directed by Herbert Ross, a long time Hollywood and Broadway go-to, who over a long career directed several disparate hits that also included The Goodbye Girl and Steel Magnolias. Modern viewers will probably be struck by the appearance of baby Sarah Jessica Parker as the friend of the preacher’s daughter. She has more charisma than Lori Singer in the lead, but I have a feeling she lacks the same dancing chops.

Anyway, I found Footloose pretty enjoyable, as a movie to kind of have in the background. I’m not sure it really holds up if you start thinking about it, but that tends to be less of a problem with some movies than with others. It really does operate according to the logic of musicals, and it spawned two Billboard number one hits and two Best Song nominees at the Oscars, and several other hit songs besides. One thing I’d say is that the version I watched had a silly warning that showed beforehand that it “may not be keeping with current norms regarding inclusion” and thus some viewers might find it offensive. There are a couple of uses of gay slurs in the movie, sure, but they’re all by people we’re supposed to think are jerks. At one point, one idiot tells Kevin Bacon that, “Only pansies wear neckties” (what). To which Bacon retorts, “That’s funny, I thought only assholes called people pansies.” I’m not saying the people who want a disclaimer like that have their hearts in the wrong place, but I am saying that this movie is already on it. Oh, and if you just search for this movie without specifying, you’re fairly likely to get the 2011 remake you probably forgot happened. Don’t watch that one.