It is interesting to me that one of the most acclaimed of the relatively few American movies set primarily on Thanksgiving (as opposed to Christmas movies that include Thanksgiving as more of an afterthought) was helmed by a Taiwanese director, Ang Lee, who did not grow up celebrating the holiday himself. Not that The Ice Storm is really a “holiday movie” in the usual sense. The Thanksgiving weekend is more of an excuse to get two neighboring families in Connecticut together for a hefty dose of 1970s ennui. The movie is listed on Amazon as a “comedy,” which seems… inaccurate? It doesn’t really have jokes, though perhaps it could be described as a “comedy of manners.” If Jane Austen had been trying to write about rich people in 1970s Connecticut instead of Regency England, perhaps she would also have included a key party. But Lee does know enough about Thanksgiving to include this scene, some version of which has been playing out in American dining rooms for decades now:

The Ice Storm centers on two neighboring rich families that crash into each other over Thanksgiving weekend 1973, in New Canaan, Connecticut, the Hoods and the Carvers. The Hood patriach, Ben (Kevin Kline), is having an affair with Janey Carver (Sigourney Weaver), as his wife (Joan Allen) is gradually realizing. Meanwhile, his 14-year-old daughter Wendy (Christina Ricci) keeps sneaking off to neck and possibly do other things (there’s a lot of people talking to each other very vaguely about sex things in this movie) with her possibly-stoner classmate Mikey Carver (Elijah Wood). She also keeps playing sexy games to mess with Mikey’s younger brother Sandy (Adam Hann-Byrd), for reasons that even she doesn’t seem to actually understand. The Hood son, Paul (Tobey Maguire), spends much of the movie riding back and forth from his college in New York on the train, where he desperately wants to sleep with a beautiful classmate named Libbets (Katie Holmes). Paul occasionally cuts in to conceptually narrate his Fantastic Four comic books in ways that are clearly meant to comment on the events of the plot (“Family is like your own personal anti-matter. Your family is the void you emerge from, and the place you return to when you die.”)

This is a story about people who feel empty inside, but for the most part can’t quite express this. Wendy feels angry about a lot of things. At one point she snaps at her father and calls him a “fascist,” at another she rails against Nixon and says he “needs to be shot” (“Can we cool it with the political assassination talk in this house?”). But you doubt she could tell you why she’s really angry. When Elena Hood figures out her husband is cheating on him, she forces them to stay at a party they had not realized was a “key party,” dramatically throwing his keys in the bowl. If asked why she does this, she definitely could not put it into words. The only happy person in the movie seems to be Mikey Carver, who has complex theories about the relationships between molecules that, in a roundabout way, may lead to the redemption of everyone. 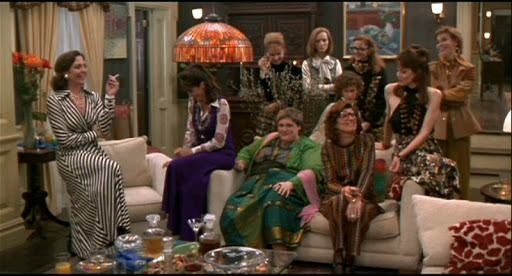 Lee and his collaborators are not interested, however, in putting pert emotional bows on, well, anything in this movie. It shows us some things that happen, and how they affect these people, and leaves us to figure out what it all means, if anything. We see the characters flailing despite the fact that most of them seem to clearly still love each other. There’s a scene where Maguire’s Paul returns and talks to his younger sister Wendy in her room, where they both call each other “Charlie.” It’s clear that, for all of his exhortations against “touching [his] shit,” they really care about each other. That all of this works as well as it does is certainly at least partly a result of its very deep cast, some of whom, like Maguire, Katie Holmes, and Allison Janney (as the chipper hostess of the key party) had not yet reached the roles for which they would become famous. Weaver is having a ball playing a cold seductress, as is Ricci, who had been a “child actress” for several years at this point but is here in her first “adult” role. However, it is Joan Allen who likely gets the meatiest role. She made this movie in the middle of a stretch where she received three Oscar nominations in five years, though none of them for this movie.

Lee himself had grown up in Taiwan but had, in fact, lived in an America not so far removed from that depicted here, getting his B.A. from the University of Illinois-Champaign starting in 1979. Lee later returned to Taiwan and started his film career after placing both first and second in a national screenplay contest. After several acclaimed Taiwanese films, he made the transition to directing English-language movies with 1995’s Sense and Sensibility, another “comedy of manners,” you might say. After The Ice Storm, he worked on a huge variety of movies, eventually becoming the first non-White director ever to win an Oscar for Best Director, for Brokeback Mountain.

Things happen in The Ice Storm, but I’m not sure I can actually tell you what “the point” of it is. It seems like the sort of movie that a bunch of people could see and take a bunch of different things from. I like that about it. It also manages to be a movie about interpersonal drama that doesn’t descend into yelling matches. In fact, there really aren’t any. There are only a few raised voices. These are, to borrow a phrase, lives of “quiet desperation,” despite the fact that they are lived by people with huge modernist houses a train-ride away from New York City. Lee sees that families are universal, whether they are superheroes or Taiwanese or rich New England suburbanites.