For better or worse, it’s impossible to put myself in the position of someone in 1969 seeing The Wild Bunch at its initial release. Its levels of violence and nihilism were so controversial that the initial press junket nearly turned into a riot, with one film journalist actually asking director Sam Peckinpah how he could possibly morally justify having made the film. At this point, a young Roger Ebert rose and announced that he thought the movie to be a masterpiece. This is not just a case of changing societal mores. There were many reports of people running out of the theater during the movie and vomiting in the street. But a generation of young filmmakers loved this movie, and pretty much no one watching this movie today is going to throw up. Sure, it’s violent, but so are a lot (a lot a lot) of other movies.

Perhaps the most lasting impact of this movie is its method of editing action sequences, which involves relentless, fast cutting, almost to the point of abstraction. Sometimes we cut in the middle of a gun fight that’s otherwise at “normal speed” to watch someone fall down in slow motion, then cut back to the gun fight. At one point in the train heist near the middle point of the movie, the movie cuts in and out three separate times from a bounty hunter falling off the train in slow motion. The final bloodbath involves 300 cuts in five minutes, for an “average shot length” of one second per shot. It’s too fast for us as viewers to process many of the images, it’s more about creating a sort of rush of emotion. In the movie’s opening action sequence, there’s a quick cut that shows someone mid-fall out of a building. We don’t see them fall, we don’t see them land, I have no idea who they are. Unfortunately, this kind of thing has been heavily influential on many directors and editors who aren’t nearly as good at it as Peckinpah and his editor, Lou Lombardo. I’ve seen probably a few dozen movies that I found basically impossible to watch, because they’re mimicking the technique here but don’t actually know what they’re doing, so it’s just a loud image salad. 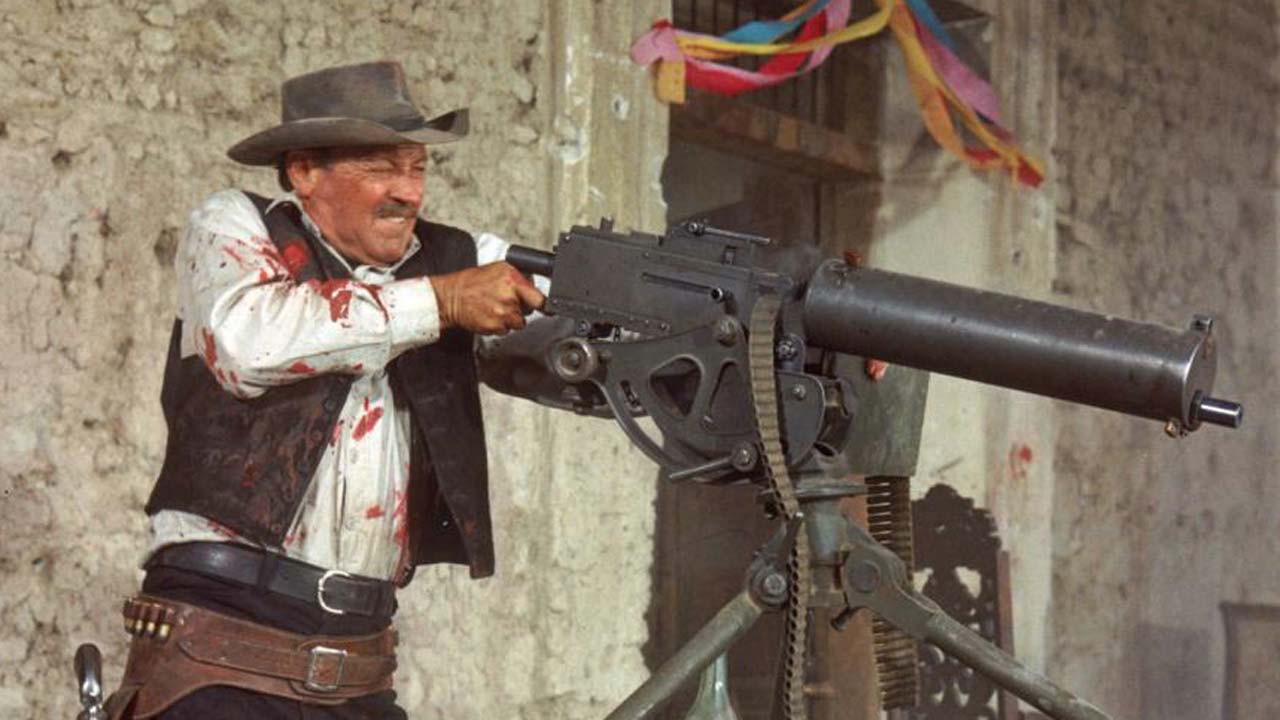 The Wild Bunch came at the forefront of a year of “revisionist Westerns,” and in fact had its release date moved up by its studio in an effort to beat Butch Cassidy and the Sundance Kid into theaters. It is about a band of aging outlaws who keep acting like they’re in a Western despite the fact that it’s 1913 and the Old West, as a thing, is mostly over. The times are leaving them behind. After an opening bank robbery (in which the money they think they’re stealing turns out to be bags full of washers), they flee to Mexico to escape bounty hunters led by a former member of the gang (Robert Ryan). In Mexico, they find themselves tangentially involved in the Mexican Revolution, and are hired by the local strongman Mapache (Emilio Fernandez) to steal a shipment of American weapons from a train just back on the US side of the border.

This robbery succeeds, highlighted by the bounty hunters, along with all their horses, getting spectacularly dropped off a bridge in slow motion (something you can tell they actually did… I don’t feel like the horses consented to this). Upon returning to Mexico, the gang collects from Mapache, but one of their number, a local named Angel (Jaime Sanchez) gets into trouble for stealing one of the weapons trunks to protect his home village. Seeing Angel dragged to death behind Mapache’s ostentatious automobile (this is a Western where cars show up, and also a machine gun), the remaining gang members stoically walk into his camp and just start shooting everyone, seemingly killing dozens of his men before finally dying themselves. While Butch Cassidy famously ends in a freeze frame just before our outlaw heroes go out in a blaze of glory, The Wild Bunch gives us no such out. It shows them getting riddled with bullets in loving detail. 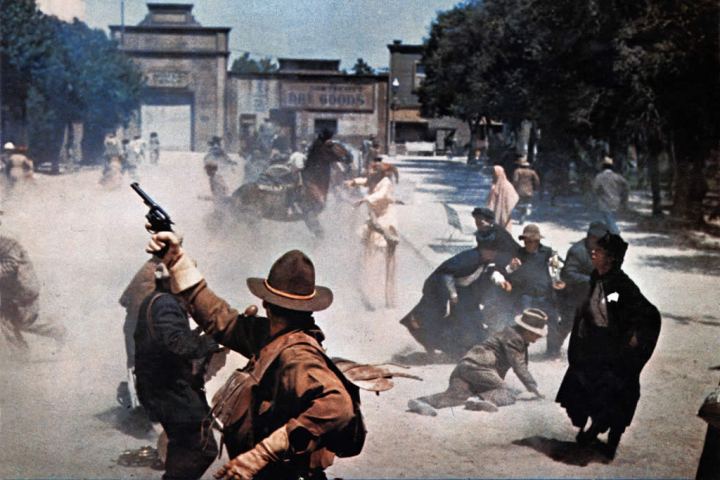 The extremely grizzled, sweaty, and dirty “Bunch” includes William Holden as the haunted leader Pike, Ernest Borgnine as his friend, and the group’s moral compass, such as it is, Dutch, Warren Oates and Ben Johnson as the barely-controllable Gorch brothers, and Edmond O’Brien as the old, bushy-bearded coot, Sykes. This group (all of whom except Oates eventually won Oscars) bring a surprising amount of emotional depth to this group of, you know, murderous criminals. These are all people who have been doing this so long they can’t really do anything else, and they’ve had a long life to build up regrets. In one key scene, Holden defends his former friend’s pursuit of the group, noting that he, “gave his word” to catch them. “He gave his word to a railroad!” Dutch shouts back. “It’s his word,” Pike yells in response. “That ain’t what counts! It’s who you give it to!” comes Dutch’s screamed reply. I found myself thinking about people today, be they politicians, political parties, corporations, or others, who demand unconditional loyalty but give basically nothing in return. This feels like a statement that cuts through so much macho Western BS, it’s important.

Which is interesting, because by reputation, Sam Peckinpah should be the favorite director of ultra-masculine doomsday preppers living on remote ranches, yet he seems to have spent his career agonizing about this. Peckinpah grew up in pre-World War II rural California, during which time he worked as an actual cowboy for a while. He then volunteered for the Marines immediately upon turning 18 in 1943 and found himself stationed in China, where he later described witnessing numerous atrocities between the Japanese and the locals in which his officers would not allow him to intervene. He returned after the war and eventually worked his way up in Hollywood, doing first TV Westerns and then movies. With only a few exceptions, most of his movies were Westerns, too, featuring grizzled heroes in a world increasingly without morals. The Wild Bunch is usually seen by critics and audiences as his masterpiece, though you will certainly find advocates of his later, much, much weirder effort, Bring Me the Head of Alfredo Garcia. 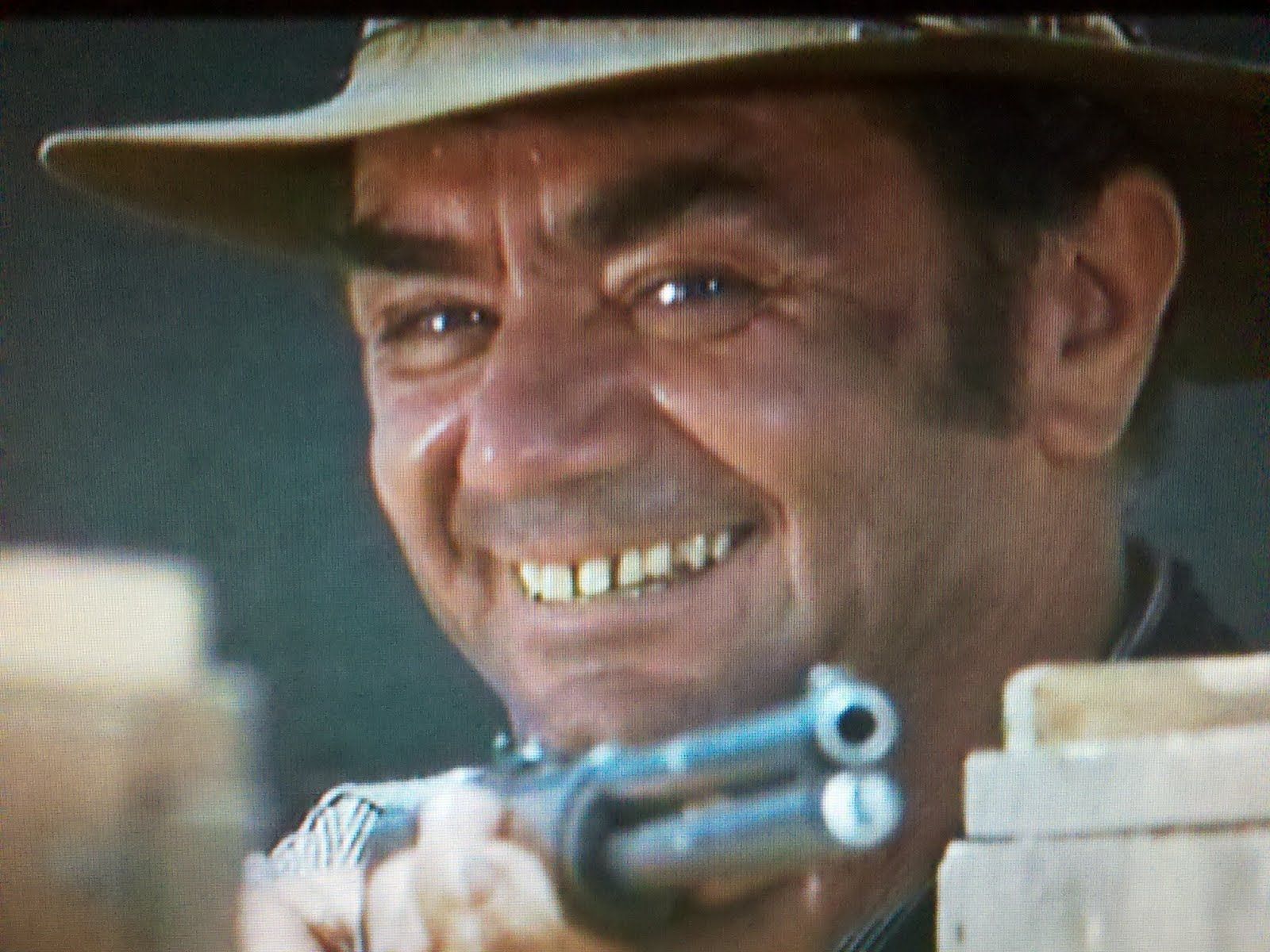 Peckinpah had married a Mexican actress, lived in Mexico for decades, and shot at least four of his Westerns mostly in the Mexican deserts, including both The Wild Bunch and Alfredo Garcia. His public image, which he didn’t particularly work to dispel, was as a caricature of a man’s man, sort of a 1960s Ernest Hemingway, reveling in violence, brooking no femininity. He was also a raging alcoholic, spending his days on movie sets alternating between shouting and sitting silently in dark glasses, whispering instructions to his assistant, and his days between shoots drinking himself into a stupor and visiting brothels, while occasionally shooting out random mirrors at his Mexican ranch house. His nephew frequently tells a story where Peckinpah took him to three separate brothels the night of his 16th birthday, so that he could “become a man.” An early Saturday Night Live sketch would parody his shtick, in which Peckinpah (played by Jim Belushi) directs his “first romantic comedy,” with perhaps predictable results.

And yet, it’s not as if Peckinpah lived a completely unexamined life. He later expressed personal devastation that US soldiers who committed atrocities in Vietnam told one reporter they had been inspired by scenes in The Wild Bunch. In a recorded interview, he stated that he had made such a violent movie because he thought it would “bring about what the Greeks call catharsis.” That is to say, he thought viewers could get out their violent impulses by going to the movie and then would be less likely to act on them in real life. “I was wrong,” he said, “I feel sick.” His depictions of violence were likely influenced by Bonnie & Clyde, from two years earlier, and were in turn likely heavily influential on many of the “great” movies of the 1970s.

In some ways, I find myself siding with the indignant critic yelling at Peckinpah over Ebert here. This is a movie with a body count seemingly in the hundreds, that hired local prostitutes to play the prostitutes visited by the Gorch brothers in one sequence (an expense Peckinpah then tried to bill to Warner Bros.), that seems to lionize living the life of a “man” of a bygone age over ever changing with the times or, you know, being an actual member of an actual society. But it also has a depth and an interest for me that may not be apparent at first. If you lined up all the Westerns ever made end to end, to tell one long story, this should be the last one, an entire genre of a bygone age going out in a blaze of grimy, bloody glory. There’s a scene in the middle of the movie where the gang is told that the US government is planning to search for them with an airplane. Most of them don’t believe it, not because they don’t think they’re being pursued, but because they don’t believe planes actually exist. “No, it’s true,” Pike insists. “They have wings and a motor.”