The veteran actress Cloris Leachman passed away last week at the age of 94. She was probably best known for her many comedy roles, including playing Phyllis on The Mary Tyler Moore Show and its subsequent spin-off, Phyllis. She also collaborated with Mel Brooks for a couple of famous roles, including appearing as Frau Blücher in Young Frankenstein and as Madame Defarge in History of the World, Part I. But Hollywood awards tend to overlook comedic performances, and Leachman received her only Oscar nomination and award for her dramatic role in The Last Picture Show. She plays the bored, somewhat despairing wife of the local high school football coach (Bill Thurman), who she implies is gay. Her character has an affair with the teenager Sonny (Timothy Bottoms). Unlike The Graduate a few years earlier, The Last Picture Show understands that there’s nothing glamorous about this, that the affair is deeply sad for all involved. It is a really great performance by Leachman. She will be missed.

We’ve watched a couple of movies here about ensembles of teenagers, in which many prominent actors first hit the “big time.” The Last Picture Show does debut many famous performers, constituting the first screen performances of Cybill Shepherd and Randy Quaid, as well as the first major role for Jeff Bridges. However, unlike the other movies we’ve covered, this one is a straight drama, filmed in black and white to somehow emphasize its own hopelessness. As Roger Ebert wrote, it is a movie about a town with no reason to exist and people who have no reason to live there. The scenes it depicts are those of a dusty, dead end life in a small town in North Texas. It is no coincidence that the movie shown at the titular “Last Picture Show,” the last showing before the local movie theater goes out of business, is Red River, an epic western starring John Wayne set in that same part of Texas. It is sort of like one of those Twitter memes: “How it started/How it’s going.” It started as a massive, noble cowboy adventure. It ends with the movie theater closing because all the kids have moved away. These are the descendants left behind by Wayne’s brave pioneers.

Before making The Last Picture Show, Peter Bogdanovich had directed two small movies, one of which was called Voyage to the Planet of Prehistoric Women. But he had enough Hollywood ins to have Orson Welles apparently living in his spare room at the time (it was Welles’ idea to film the movie in black and white), and to have Sal Mineo hand him the novel on which this movie is based and say he should make it. He also apparently saw Cybill Shepherd, a young model with no plans to pursue an acting career at the time, on the cover of Glamour, and immediately decided that she was his ideal woman and that he wanted to cast her in the movie. While Shepherd and the much older Bogdanovich ended up sleeping together behind the scenes, she became a star for her role as Jacy, the prettiest girl in town who sleeps with her ex-boyfriend Sonny because an older guy she thinks is cool rejects her for still being a virgin.

Sonny and his friend, Duane (Bridges) are two local football players in a town where the football is really all there is. The local pool hall is run by aging local hero Sam the Lion (veteran western star Ben Johnson), who the boys see as a father figure. Johnson would win a Best Supporting Actor Oscar for his performance, especially a scene in the middle where gives this long monologue reminiscing about his hijinks when he was younger and wishing he could go with the boys on their joyride to Mexico. But the trip goes wrong, and when they get back Sam has died of a stroke. It turns out he left the pool hall to Sonny in his will. In the end, Duane leaves for the army in Korea on a bus, but not before he and Sonny go see Red River one last time. 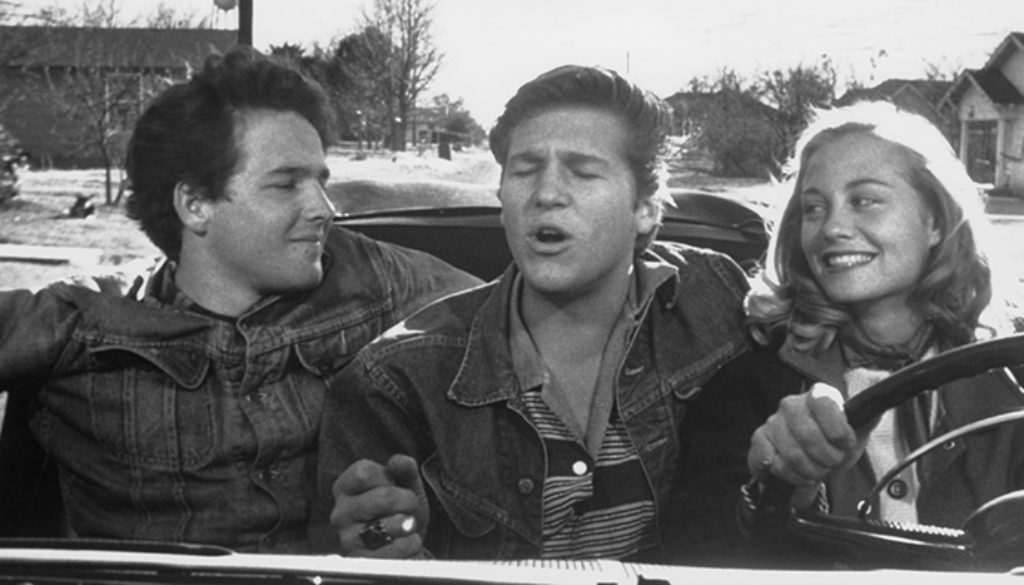 Though set in the 1950s, this movie was so far ahead of its time in terms of its frank depiction of sexuality that it was the subject of multiple obscenity cases in more conservative parts of the country. The most controversial scene involved Shepherd’s character getting pressured into skinnydipping by the older guy she has a crush on (Gary Brockette). This is a rural, crappy, dying town in an era before the internet with one and a half TV channels, there really isn’t much else to do. When she’s bored later on, Jacy sleeps with her mother’s boyfriend Abilene (Clu Gulager), for no other particular reason than that he’s there. The mother, played by Ellen Burstyn, later tells Sonny he should have stayed with the older Mrs. Popper (Leachman) rather than ending up with her daughter.

If I’m honest, The Last Picture Show has some strong performances but for the most part failed to grab my attention to any great degree. Shortly after watching it, I had to read the Wikipedia summary to remember pretty much anything that happened. Its virtue is in approaching these people’s lives as they often actually are, as essentially hopeless. But by that some token, it’s not particularly fun to watch to any degree. And while the movie brought many popular actors to light, I’d rather watch them in most of their other work. Obviously Jeff Bridges has gone on to a long and successful career, including 7 Oscar nominations and one win (for Crazy Heart in 2010). Shepherd also went onto a successful career that included her own first-name-titled sitcom (Cybill) and starring opposite Bruce Willis in Moonlighting. And Bogdanovich earned himself a spot in the same “New Hollywood” movement as contemporaries like Steven Spielberg, and continues making movies today, though few entries in his filmography have met with nearly the same degree of acclaim as this one.