Welcome to our Irish Virtual Film Festival, celebrating all types of Irish-themed cinema the week of St. Patrick’s Day. I am half-Irish, and grew up going to Irish festivals and celebrating St. Patrick’s Day in Cleveland. Today, Ireland itself is probably the favorite vacation spot for my wife and I. On our last trip, a few years ago, we went to the far West Coast of Ireland, where the Atlantic whips against tall cliffs to create incredible vistas. We did not visit the Aran Islands themselves, but we did take a boat past the cliffs from the same port where ferries were leaving for the islands. A few minutes on a boat in those waters was honestly a completely new (and somewhat queasy) experience for me, as the boat literally went up and down the crests of waves. So I can only imagine how the island men must feel in the climactic sequence of Man of Aran, in their tiny rowboat.

The Criterion Channel classifies Man of Aran as “docufiction.” At the time it would just have been billed as a “documentary,” but that is a term that has evolved over the years. Its director, Robert J. Flaherty, is sometimes called the “Father of the Documentary,” but he made films with techniques that would horrify many documentary filmmakers today. His movies were basically fictional, with “locals” being cast in roles and performing in invented scenarios. Man of Aran depicts a man and his family eking out an existence on the Aran Islands, which the movie describes as “three wastes of rock.” But the Man, the Wife, and the Son are played by islanders who were not actually related, selected for their “photogenic qualities.” Of particular controversy is the movie’s climactic sequence, in which the men of the village hunt huge Basking Sharks in small rowboats using only primitive spears and nets, while huge waves pound around them. It has been alleged that this practice had entirely died out for a couple of decades before the time of the movie. 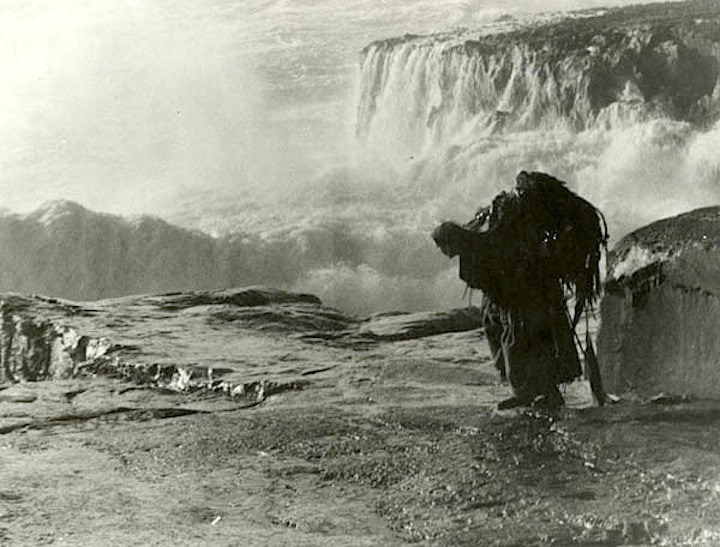 This may come off as almost offensive to those who see the purpose of documentaries as depicting real life as closely as possible. Of course, all documentaries have some degree of artifice, whether it’s what information is presented, what footage is included, or just what shots or techniques are chosen. It is perhaps a bizarre coincidence that the star of Man of Aran was named “Tiger” King, but it somehow feels like a meaningful one. It is worthwhile, perhaps, to point out that even if the scenes were staged, the actions depicted are actually happening. Those men really were sharkfishing in tiny boats in those waves. Flaherty himself later said he “should have been shot” for the amount of danger he put his actors in for this film. He also said, “One often has to distort a thing to catch its true spirit.”

Flaherty first rose to prominence with Nanook of the North, released in 1922, which applied similar techniques to the customs and practices of the Inuit in the Canadian far north. It became the first financially successful feature-length documentary ever made. It has since come out that during the shooting of Nanook, Flaherty had an affair with his lead actress, leading to a half-Inuit son who he never acknowledged.  Flaherty held a highly romantic view of “primitive” peoples, who he thought led lives that were far nobler than his own. Contemporary reviewers of Man of Aran coined the term “Neo-Rousseauism” to describe his viewpoint, comparing his films to the work of the 18th-century philosopher Jean-Jacques Rousseau.

All of Flaherty’s movies seem to follow Rousseau’s concept of the “noble savage.” Nanook was such a success that Hollywood agreed to finance his subsequent efforts. He went on to direct Moana (not that one), shot in Samoa, and, with F.W. Murnau, the slightly more fictionalized Tabu: A Story of the South Seas, set on Bora Bora. However, his style of setting up shop somewhere for literally years, shooting days and days of film, and eventually figuring out what movie he wanted to make did not jive with Hollywood Studios. He then went first to Britain and then to Ireland, where his British producers funded his multiple years on the island of Inishmore while hoping to show that British films could be just as artistically successful as American ones. The 1994 Canadian movie Kabloonak (Inuit for “White Man”) stars Charles Dance as Flaherty during the making of Nanook of the North.

In recent years a third way of coming to Flaherty’s movies has come more into vogue, that of the various cultures depicted, for whom his films have actually turned into valuable records of practices that might not otherwise have survived into the age of film. Even if there was not this type of sharkfishing in 1934, there were those still alive who remembered how it was done. And if Flaherty hadn’t staged it, we would have no video of it happening at all. It’s a little like people who go in and record the last speaker of a language, even if no one actually talks to each other using that language any more. Obviously, Flaherty had no idea that he was doing that, which if anything makes it more interesting.

Anyway, for me coming to this movie in 2021, it feels even more alien than you might expect. From a story perspective, not as much happens as might think over the run-time.  It is only about an hour and 15 minutes long, and of that running length I’d say about a third of it is just waves. They’re some pretty insane waves, but waves nonetheless. What would today be in enormous high definition is somehow transformed in black and white. The Aran Islands shown here are not just bare, they are abstract, chiaroscuro art, outside human reality. If Man of Aran isn’t a precisely accurate document of an actual place and time, it is an accurate document of a very specific impression of a place outside time, and maybe that’s more interesting.