I’ll admit it, when I’m watching movies at home, I often look at my phone during the movie. Silent movies in particular can sometimes seem easy to look away from. But not this one. Maybe it was the dog who was very insistent on sitting on top of me, but I found myself transfixed throughout La Passion de Jeanne d’Arc (The Passion of Joan of Arc). Some movies are well known because they influenced many subsequent films. Some are well known because they are totally unique and nobody who sees them ever forgets. This is definitely the latter. The great French director Jean Cocteau once said that it seemed like “an historical document from an era in which the cinema didn’t exist.”

The film is the product of director Carl Theodor Dreyer, whose dramas had become major hits in his native Denmark, being brought in by the French film authorities to direct a movie about a French historical figure of his choice. He found his star when he saw Renée Jeanne Falconetti in a Paris theater. She had only been in one other movie, many years earlier. Yet here she gives the most stunning, beautiful dramatic performance I think I’ve ever seen. Pauline Kael called it the greatest in film history. So much of this movie is just her face, in extreme close-up, with no makeup. Though Falconetti was 35, Joan just 19 at the time of the events depicted here, you never get the sense in the slightest that this is an actress playing a character. Every nuance of real emotion comes through. 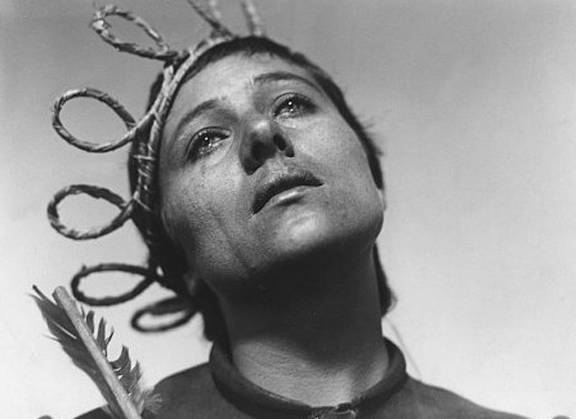 Dreyer threw out a screenplay written for the movie and based the whole thing on the actual transcript of the trial of Joan of Arc at the hands of church officials and her English captors. He leaves out entirely Joan’s prior life, focusing exclusively on her final trial and execution. Yet this never quite turns into Passion of the Christ torture porn, perhaps because this Joan is so vibrant and alive. Dreyer then tells this story in an exclusively stylized, almost jagged manner. There are no establishing shots, and in fact the movie feels like it’s about 90% close-ups of faces. He likes to shoot Joan’s judges from beneath, towering over her, sometimes having to dig holes in the floor to get the angles he wanted. The medium shots we do get tend to be framed in ways you would not expect, with the actor’s face in one corner and the rest of the frame filled with hulking architecture.

A modern viewer may feel unsettled and displaced throughout, but not able to put their finger on why. When we’re watching a movie, even if we don’t realize, we expect the shots to be put together in such a way as to suggest a greater sense of the space of what’s happening. If two characters are having a conversation across a table, even if we don’t get a “two shot” showing both of them, they’ll be framed and cut together in such a way as to suggest that the characters are looking at each other and the physical relationship between them. This movie has no interest in doing that. Film scholar David Bordwell once did a detailed shot-by-shot analysis of the movie and determined that, of approximately 1,500 cuts in La Passion de Jeanne d’Arc, fewer than 30 carry over an object from one shot to another or suggest any sort of spatial continuity between shots. We as viewers are left entirely on our own to determine the relationship between the images. 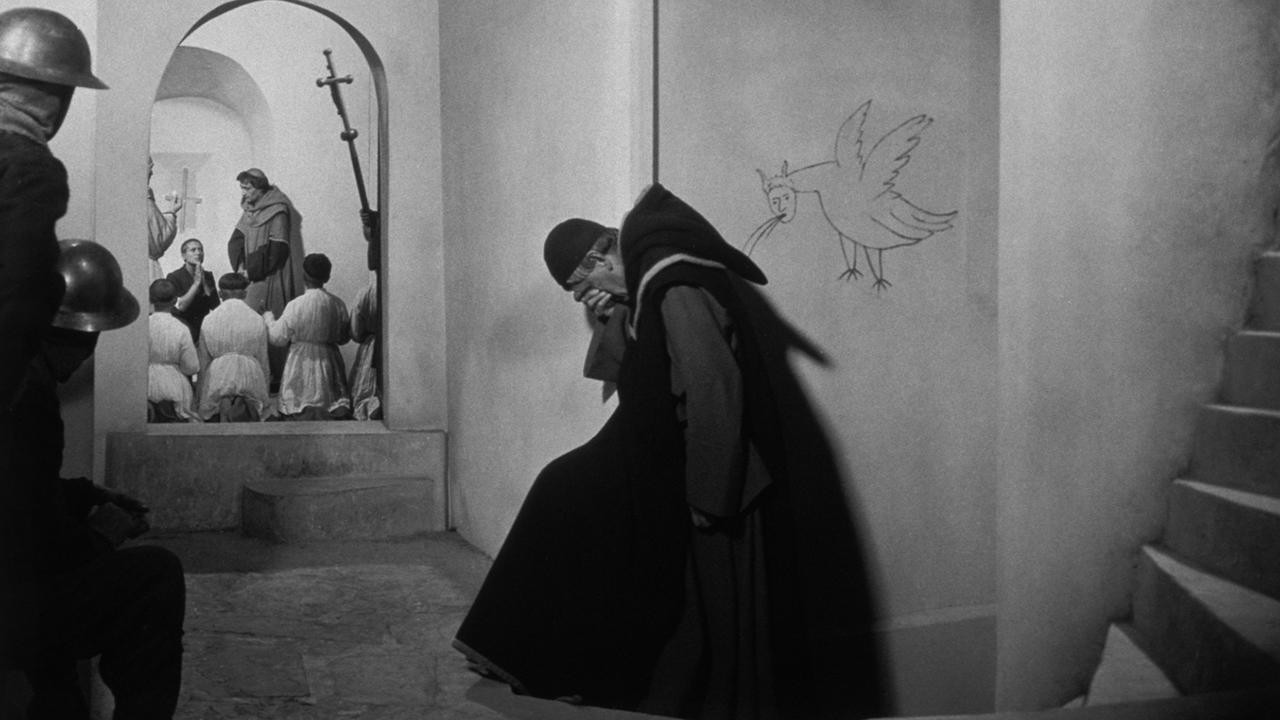 Perhaps the most elaborate set in film history up to this time, costing millions of Francs, was built for this movie, basically reproducing Rouen Castle (where Joan’s trial actually occurred) in concrete. Dreyer’s version of the castle is full of weird nooks and crannies, and doors and windows resolutely don’t line up. Yet he only ever shows us snatches of it, because, again, there is no big establishing shot. This deeply frustrated the movie’s producers, who had not spent all this money on a set for the director to refuse to show it (for his part, Dreyer said that the set helped the movie by assisting the actors in getting into their characters). The movie was also beset by the censorship of various governments and institutions, along with protests in France at the idea that a foreigner could possibly make a movie about one of the country’s greatest national heroes. The Catholic Church requested a private screening in the library of Notre-Dame de Paris, and then reportedly made the producers cut a scene where Joan is offered the eucharist by church officials, but only if she agrees to sign a document renouncing her claims of visions from God (that this is a real thing from the actual transcripts did not move them in the slightest).

This is one of those movies that has gone through a long, tortured history, and we only have the definitive, absolutely pristine version you can watch now through happenstance. The original negative burned in a fire at a German movie studio, so Dreyer put together an alternate version using other takes and bits and pieces. Then the original of that version burned in a fire, too. For decades, people could only watch heavily censored versions, or a weird recreation from the 1940s (publicly reviled by Dreyer himself) that had extremely hard-to-read subtitles superimposed over stained glass and added narration. Then in 1981 a bunch of film canisters were found while cleaning out a closet in a mental asylum in Oslo, which turned out to contain Dreyer’s original, pre-censorship cut of the movie. How or why it got there, nobody actually knows. I love these weird little bits of film history. 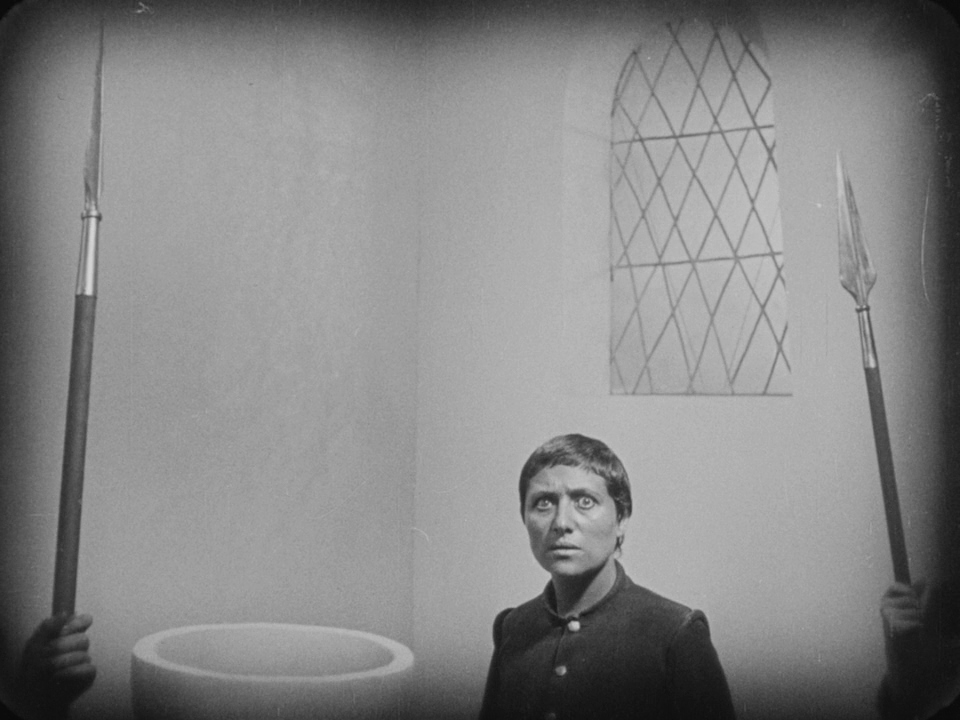 The reason that the movie endured through those years is because of the spectacular performance Falconetti gives here. Movie history is full of indelible images remembered by everyone who saw them, but of these very few are just close-ups of a face. Roger Ebert opened his “Great Movies” essay on La Passion de Jeanne d’Arc with “[y]ou cannot know the history of silent films unless you know the face of Renée Jeanne Falconetti.” I might go a step further and say you cannot know the history of movies in general. Keep in mind that this is a silent movie, albeit with a lot of title cards. Falconetti does not have words to fall back on in giving her performance. Yet she can convey so many levels of emotion at the same time. In an early scene, the judges try to trick her into blaspheming, asking about the details of her encounter with St. Michael. The look on her face tells us that she believes that no words could ever possibly do justice to what happened to her. Falconetti herself never appeared in another movie, eventually fleeing to Argentina to escape World War II, where she died of apparent suicide in 1946. Yet her name remains legendary among film buffs.

I could spend all day discussing the many nuances of this movie. It used a new kind of film, for example, that was able to depict skin tones realistically. This enabled Dreyer’s insistence on his actors not using makeup. The inner ugliness of Joan’s judges seems to burst out in the craggy details of their personal appearance. However, many better writers than I have spent nearly a century discussing it. I would say that anyone who loves movies will likely get a great deal out of watching it. We’ve seen movies on this site that are entirely of their time, but this, as Cocteau said, is a film that seems to exist entirely outside of time.