The Party is the 209th movie I’ve written about for this site, and I think it’s probably my least favorite so far. I think I am supposed to say that this is because basically it stars Peter Sellers in brownface as an Indian movie actor, on top of which he gives a performance reliant throughout on ethnic stereotypes. But if I’m honest, the real reason is that an alternate title for this film might be Social Anxiety: The Movie. I fully admit that I watched long stretches of it on mute, in the exact same way that I watched the “Michael’s Kids” episode of The Office. The whole thing makes my skin crawl.

I am not the only one with the opinion that The Party is, well, pretty racist, and if you like the combo of Sellers and director Blake Edwards, you can get plenty from the various Pink Panther movies on which they collaborated. However, it is a particularly beloved movie of a specific segment of critics, a segment that might be concentrated in Europe if the movie’s inclusion on the Cahiers du Cinema Top 100 movies ever made list is to be taken at face value. In their biography of Edwards, film writers Peter Lehman and William Luhr called the movie “the single most radical film since D.W. Griffith’s style came to dominate American cinema.” While hardly a “silent movie,” there is very little dialogue in the whole thing, in a way that reminds me of the French comedian Jacques Tati. It is basically all Peter Sellers doing these little (and sometimes big) physical comedy bits. Meanwhile, the screen is crammed full of weird things happening off in the corners. Edwards refuses to use the camera to tell us where to look or what to concentrate on. It feels like a movie that lacks a director, and that way is almost one long directing gimmick. 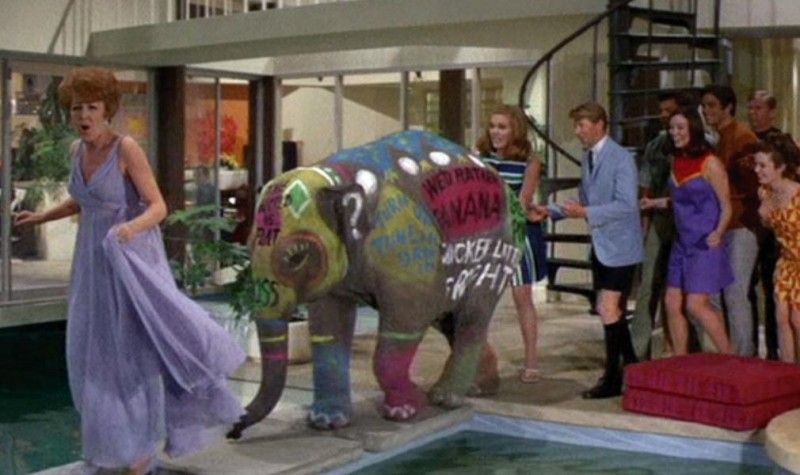 So I actually do see what the people who love this movie see in it. To give you an idea of what Sellers is doing here, his performance is considered one of the primary influences of Rowan Atkinson’s wildly popular Mr. Bean character. It is a lot of him drastically losing control of seemingly simple situations. The thing is, it is not just racist by our modern standards, it was considered so at the time it was released. The great Indian director Satyajit Ray was planning to work with Sellers on an upcoming film until he saw this movie and was deeply offended. It is also supposed to have served as one of the inspirations for Apu on The Simpsons, a character that was recently the subject of a feature documentary about why it’s racist (Late in the movie, Sellers says Apu is the name of his pet monkey). Yet Indira Gandhi reportedly liked the movie, even quoting one of its lines in some of her speeches: when a belligerent man worried about Sellers’ character “stealing his girl” asks him, “Who do you think you are?,” Sellers replies, “In India, we don’t think who we are, we know who we are.”

What gets me about all of this is that you could 100% have done this movie without the Brownface. There’s no particular reason why Sellers’ fish-out-of-water caricature, “Hrundi V. Bakshi,” had to be from India. At the Swingin’ 60s Hollywood party at a big modernist pad, where most of this movie takes place, he could just as easily have been from Kansas City or Winnipeg and nearly all the “fish out of water” comedy bits would work exactly as well.

Nearly all of the movie takes place at that party, where Sellers just basically does improvisational comedy for an hour and a half. There are a couple of subplots (he’s at the house of a producer whose elaborate set he just accidentally blew up, one girl is trying to catch the eye of another producer to start an acting career, two of the catering staff keep getting into fights, another waiter keeps drinking all of the drinks Bakshi turns down, etc.), but these are all never anything more than excuses for little visual gag after little visual gag. Here’s one section that’s just about Bakshi losing his shoe in the fountain that goes on for four minutes. The whole movie is like this.

So, I think that there is definitely a part of me that would like this movie if it weren’t for, you know, the racism and, mostly, the social awkwardness. I referenced The Office. There was a time maybe 15 years ago or so when awkward comedy was taking over TV and the movies and I mostly hated it. I would rather watch someone’s fingers be chopped off in gruesome detail, one by one, than watch Bakshi awkwardly apologize for one of his foibles to his host (Stephen Liss), then get his tie stuck under the man’s arm and be unable to figure out to how leave gracefully. It made me want to scream. I’m not saying that’s the fault of this movie, really, but I’m saying that it means I can’t evaluate it in any meaningful way, because I spent its running time wanting to get away from it. Sellers and Edwards are both clearly great talents, and in a different context I could have gotten behind the devotion to physical improvisation here. But I’ll stick to their other movies, thanks.