I picked out Deliverance this week because of the passing of the great actor Ned Beatty, who rarely had starring roles but always brought something interesting to smaller parts. We talked about him before in a memorable role in Network, which I believe I said included some of the best “hand acting” in movie history. He also had a small role in All the President’s Men and played Lex Luthor’s bumbling henchman in multiple Superman movies, and even voiced the villainous “Lotso Huggin’ Bear” in Toy Story 3. His first movie role, however, was in Deliverance. Unfortunately, The Hollywood Reporter caused some controversy in reporting on Beatty’s death by starting the headline of its obituary, “Actor Ned Beatty, Who Made Quite the Impression in Deliverance…” For those who are unaware, it is Beatty’s character, in the movie’s most famous/infamous scene, is raped by a backwoods “Mountain Man” (Bill McKinney) and made to “squeal like a pig.” This scene has been the subject of a lot of bad taste humor over the years, and it is to Beatty’s extreme credit that, contrary to the apparent opinion of the Reporter’s headline writer, it didn’t end up defining his career. Ned Beatty passed away last weekend of natural causes at the age of 83.

Taking the movie Deliverance on its own terms, I find that I have very little idea what to actually make of it, moreso than almost any other movie we’ve discussed here. There are two scenes most people my age may be aware of from it, an early sequence involving “Dueling Banjoes” and that rape scene. I doubt many people who weren’t around the 1970s know much about the rest. The plot concerns a group of four “big city” friends from Atlanta who go on a whitewater canoeing trip down a river in rural Georgia that goes seriously awry. What I didn’t really know is how, outside of the one infamous scene with Beatty, everything that happens in the movie is extremely ambiguous. The men survive, but in the process do they murder an innocent bystander? Is one of them shot and killed, or does one of them fall out of a boat and die in the rapids? The movie has absolutely no interest in giving us any clues about this. In the meantime, there are a handful of very violent moments, which the movie would insist are for high-minded reasons. The point of this, it seems, is the extent to which civilization can break down with survival on the line.

It seems strange today to realize just how much critical acclaim Deliverance received in 1972, including, somehow, a Best Picture nomination. One dissenting voice was Roger Ebert, who basically said that the movie’s interest in its Themes-with-a-capital-T derails whatever thriller elements it might have had. I really do wonder if anyone would care about it at all if it came out today, because those themes are pretty ham-fisted and, while the plot itself has a lot of ambiguity, the portrayals of the characters have absolutely none. The idea of poor people in general as destructive forces of nature seems a bit of a nuts concept for a movie, or at least one that would engender a great deal of discussion, but forty years ago it appears we were basically cool with it.

Burt Reynolds had starred in movies before, but Deliverance was considered his “breakthrough role.” He plays the friend who has a lot of weird ideas that he has to say out loud about what’s lost from civilization, and drags everyone out to the river for the canoe trip. Reynolds’ movies, I would say, tend to have survived more as records of his stardom than as movies in and of themselves. These would include The Longest Yard, Smokey and the Bandit, and The Cannonball Run. Deliverance might be the exception to this trend in that it exists in the public consciousness outside of Reynolds’ relationship to it. However, it did set him on the path that led to him being considered Hollywood’s top grossing male star at the box office for five consecutive years, from 1978 to 1982. In fact, going into the movie Jon Voight, who was three years removed from an Oscar nomination for Midnight Cowboy, was probably the bigger star. 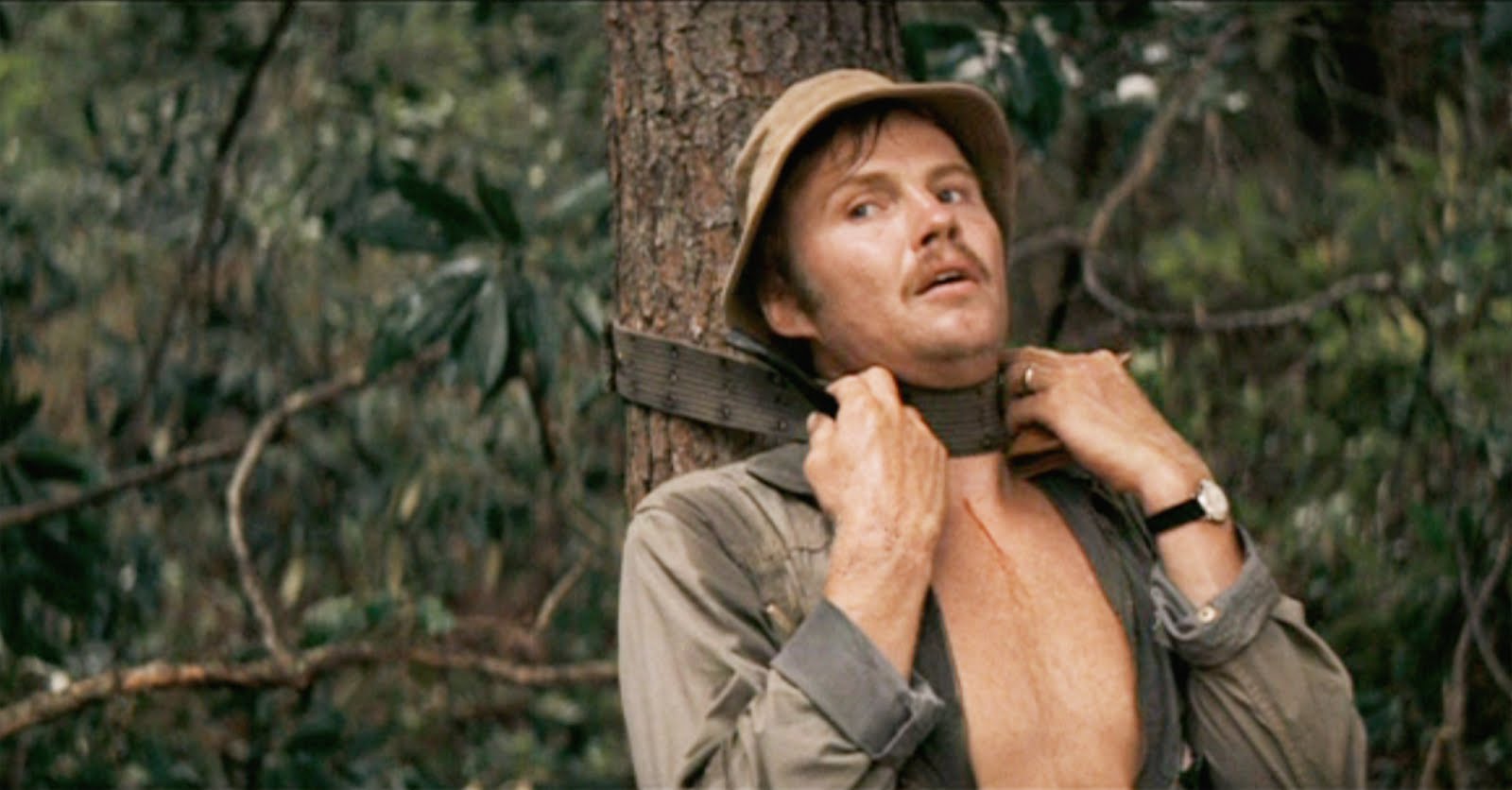 Another thing I did not realize about Deliverance until actually watching it is that it was directed by the Northern Irishman John Boorman, who hardly seems the most likely candidate. Boorman took the cast out to the Chattanooga River out on the Georgia/South Carolina border, basically where the story is set (the name of the river is fictionalized in the movie), got into literal fistfights with the drunk screenwriter, and let all the actors do their own stunts. Doing one key scene where Reynolds’ character falls over a waterfall, Boorman had intended to use a dummy, but Reynolds insisted on doing the stunt himself. He ended up hitting his head on a rock and blacking out until he woke up downstream with “all his clothes torn off.” Boorman visited Reynolds in the hospital, where Reynolds asked him, “How’d it look?” “Like a dummy falling over a waterfall,” Boorman replied. After his big hit, Boorman intended to make his next film an adaptation of Lord of The Rings, going as far as discussing the project at length with J.R.R. Tolkien, but ended up making Zardoz with Sean Connery. This latter movie is so nuts that I’d love to feature on this site at some point. Boorman ended up using many of his fantasy ideas to make Excalibur several years later.

I didn’t really actively dislike Deliverance, rather I found it not quite working on me the way I think it was supposed to. All the reviews from the time talk about how exciting it is as a thriller. Watching it today, I find this totally baffling. I will say that all the actors are good in it, and the setting on a raging river amidst wild gorges is spectacular. But as a movie I have no idea what to do with this.