Some movies are referred to as “great,” and you immediately get a sense of what that means. But some other movies are absolutely perfect at what they set out to do, illuminate specific truths of human existence, specific places, specific times, and I often find myself more drawn to the latter than to the former. The Third Man is one of the latter. It was shot mostly on location in a Vienna just post-World War II, with piles of rubble and bomb craters still on every block, divided into four separate “zones of control” by the Allied powers. It exudes a world-weary cynicism, that of a city devastated by war, dominated by the black market, and yet finding itself on the cusp of Cold War paranoia. Roger Ebert called it “the exhausted aftermath of Casablanca.” Its lighting is expressionist chiaroscuro, with nearly every shot slanted at weird angles. No movie I’ve ever seen gets more mileage out of dutch angles. Everything is played over this score of zither music by Anton Karas (who the director, Carol Reed, happened to hear playing in a local beer garden), which seems cheerful at first but then we realize that it really isn’t.

The Third Man starts with a somewhat innocent American Pulp Western novelist named Holly Martins (Joseph Cotten, who had played Orson Welles’ straight man in several movies, including Citizen Kane), arriving in Vienna to take up a job offer from an old friend named Harry Lime. Upon arrival, however, he finds that Lime is dead from a car accident, leaving behind a girl, Anna (Alida Valli, putting on her best Ingrid Bergman), who is still infatuated with Harry but who Holly immediately falls for. Meanwhile, they both keep running into the British Inspector Callaway (Trevor Howard), who insists that Lime was a “monster” and that Holly should just leave. Holly doesn’t believe him, and sets out to prove Lime’s innocence from whatever Callaway is accusing him of, and eventually comes to the vague conclusion that he thinks Harry was murdered. 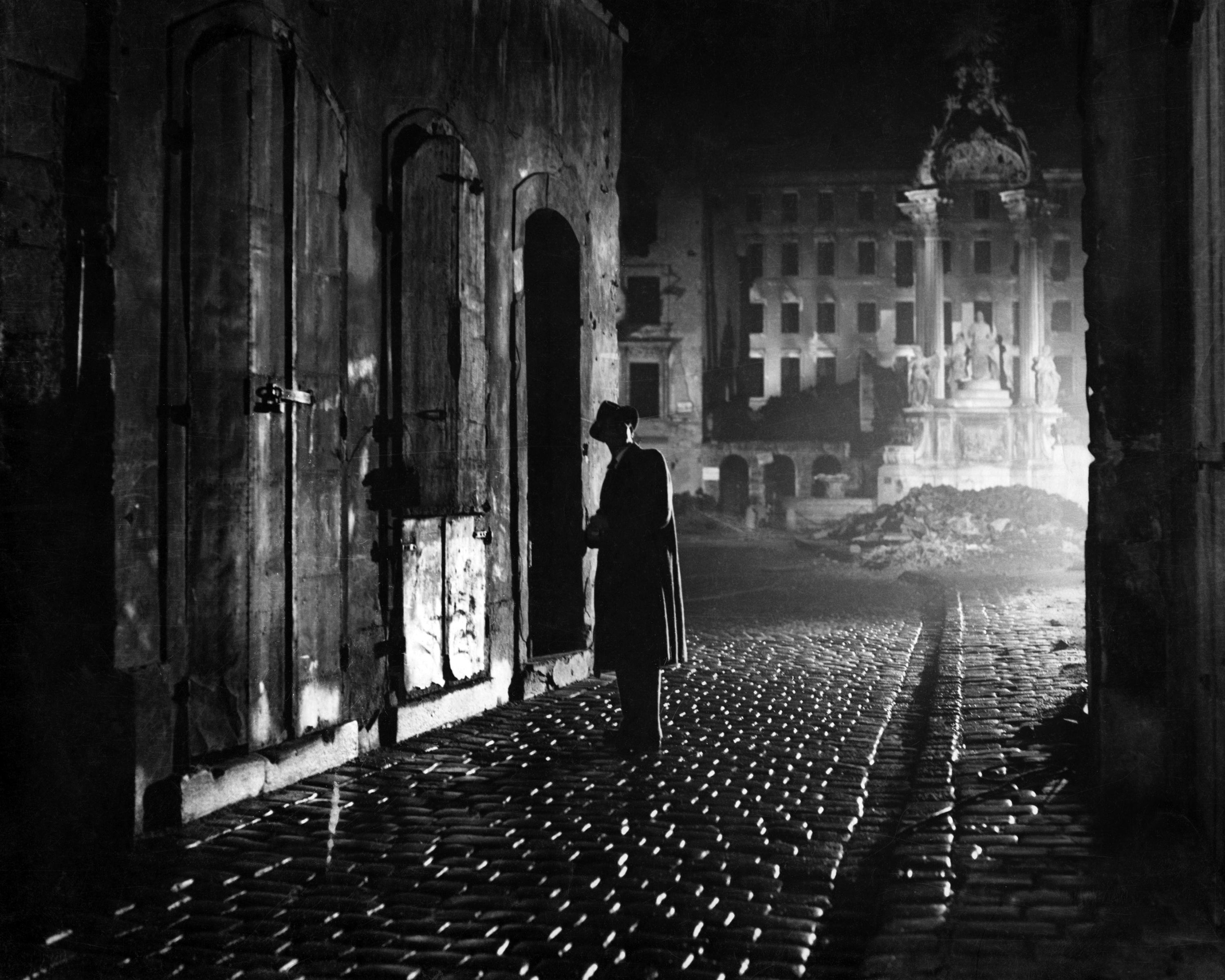 Though the film has the trappings of a Film Noir mystery, it mostly meanders through the first hour or so reveling in the atmosphere. Then it pulls its big twist, which is so famous (and so much the actual point of the movie) that I don’t have any qualms about discussing it here. Lime, it turns out, is still alive, and played by none other than Orson Welles, a wry grin fixed on his face. The scene where we learn this, first showing the character’s feet and then having Welles’ face illuminated by a sudden light from a window, is justly considered one of the great cinematic reveals. In a subsequent scene, Harry and Holly meet on Vienna’s famous old ferris wheel, and Welles gets a famous monologue:

You know what the fellow said – in Italy, for 30 years under the Borgias, they had warfare, terror, murder and bloodshed, but they produced Michelangelo, Leonardo da Vinci and the Renaissance. In Switzerland, they had brotherly love; they had five hundred years of democracy and peace – and what did that produce? The cuckoo clock.

The great novelist Graham Greene, who wrote the screenplay, always said that Welles came up with the speech himself (it has also been pointed out that they don’t actually make cuckoo clocks in Switzerland, as they are in fact an invention from Germany’s Black Forest, though this seems beside the point). Welles’ involvement, and the movie’s bizarre-but-extremely-effective sense of visual composition, has led to persistent rumors that Welles had in fact been the primary director on the movie. He and others involved always pushed back at this. In fact, Carol Reed was a great director in his own right, and you can certainly see the seeds of some of The Third Man’s most famous bits in his prior films like Odd Man Out. It is likely more accurate to say that The Third Man was greatly influenced stylistically by Welles’ movies as a director, and just happened to also have Welles in the cast as an actor.

The black and white cinematography by Robert Krasker is among the most acclaimed in movie history, and justly won the movie’s only Oscar. He creates a crazy paranoid world, where it seems to be night most of the time. In one tense scene, we see a human shadow approaching against a building, three stories high. It is soon revealed to be a little old man trying to sell balloons. Another of the movie’s very famous sequences takes place in the Vienna sewers, where there seems to be a bright light just around every corner, just enough to show us Welles’ eyes as Lime furtively tries to escape the authorities. It is one of the great arguments for black and white as a medium.

So you can probably tell that I loved this movie. Even in a world where everything comes from some prior intellectual property, this is one property that I don’t think can be effectively remade. It is so specifically a product of a special alchemy of time, place, and personnel. There is no replication of the crazy sleaziness of postwar Vienna, nor of its particular sense of vaguely spy-type paranoia, with the Cold War just ramping up. For me it is one of those essential movies.

A brief note about some technicalities here I thought I’d mention. The Third Man was at one point voted by the British Film Institute as the best British film of all time. The director, Carol Reed, and a substantial portion of the movie’s financing came from England, and the studio card at the top of the film literally says “London Film” with a bonging Big Ben next to it. Yet it also featured on the initial 1997 AFI list of the greatest American films, seemingly a product of a very expansive definition of “American” and the fact that David O. Selznick is listed as one of the movie’s several producers. The movie then dropped off the next AFI list ten years later, leading me to believe, not that voters didn’t like the movie as much, but that enough people came to the conclusion that, if The Third Man counted as an “American” film, then the term had no meaning. To return back to the beginning of this article, The Third Man is often listed among the classics of British cinema, because it’s such an undeniably great movie, but it is so much of its time and place that it can’t really be said to illuminate something specific about Britishness, in the way that, say, Citizen Kane can be said to be “about” America in some way. Which perhaps is appropriate for British filmmaking, somehow.