“Wait a minute, wait a minute, you ain’t heard nothin’ yet!” is the first spoken line in movie history. That level of irony was apparently unintentional, as the line had been Al Jolson’s stage catchphrase for years. But The Jazz Singer’s place in movie history was assured with that line. Much to the surprise of most studio executives of the time, audiences loved movies where people talked and sang and stuff, it turned out. Sound didn’t quite take over the movies overnight, but within three or four years silent movies basically weren’t being made anymore.

This fact tends to overshadow The Jazz Singer as an actual movie, to the point that I doubt even a lot of “movie people” these days have ever seen it. This issue is probably exacerbated by a few things. First, by the fact that the movie is this kind of weird hybrid. The songs have synced sound, but most of the non-singing scenes act like they’re in a silent movie. There are only a couple quick bits of dialogue, including one scene in the middle of the movie where Jolson’s characters tells his mother (Eugenie Besserer) about his showbiz career, and then his rabbi dad comes in and yells “Stop!” and the sound suddenly goes away again. The second reason the movie’s actual intrinsic appeal has waned over the years is because of the amount of blackface it involves. We’re not talking one scene, or a little blackface. Al Jolson is blackface for long stretches of this movie, including a couple of key scenes. Jolson came from the stage, where this was pretty standard at the time, for whatever that’s worth. But a lot of people will have a hard time getting past it, and I’m not really gonna sit here and say that they should. 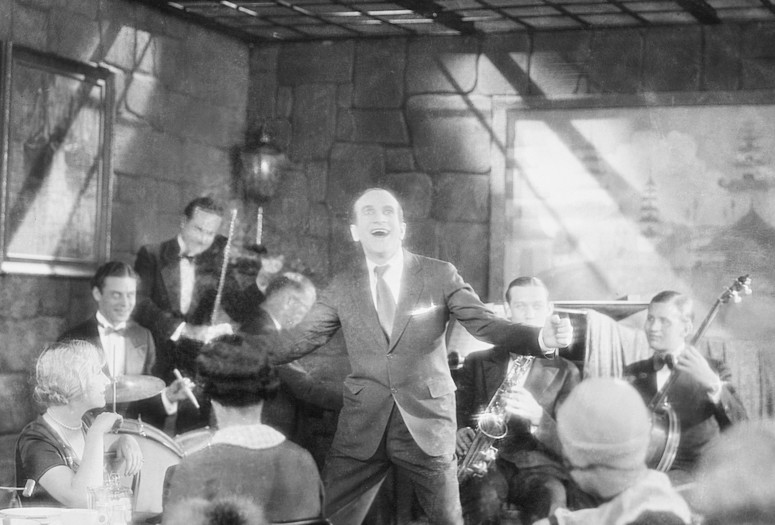 As a story, The Jazz Singer is very standard in terms of how it’s designed to tug at the heart strings of its audience, and doesn’t really do a bad job of it. It tells the story of “Jakie Rabinowitz” (Jolson), who dreams of life on the stage. His father (Warner Oland), however, is a cantor at a synagogue, and insists that Jakie must be a cantor, like his father and his father before him. Eventually, the father kicks Jakie out of the house, much to his mother’s distress. Jakie, however, finds success as a singer named “Jack Robin,” as well as a girlfriend (May McAvoy). But then his father gets sick, and the synagogue needs someone to serve as cantor on Yom Kippur, on of the course the same night that Jakie is supposed to have his big break. But he both sings on stage and appears at the synagogue (which I would point out means the whole thing was a false dichotomy, but whatever). The father hears him singing and dies happy, while the girlfriend comments that he is “a jazz singer singing to his God.” In the last scene Jolson sings “Mammy” to his mother in the front row, of course in full blackface.

One thing that did strike me about The Jazz Singer is how unapologetically Jewish it is. Obviously I knew it was a story about a cantor’s son, but it was still somehow incongruous to watch 1920s people argue in silent movie subtitles about who will sing the “Kol Nidre.” It’s interesting to me that among the first uses of movie sound is to capture the song of a Hazzan. Likely contributing to this is that The Jazz Singer’s producer, director, writer, and star were all Jewish themselves. There have been numerous academic papers written about how Al Jolson’s use of blackface was influenced by his experience being part of another outsider group, but I’m not sure I’m qualified to go too far into that. 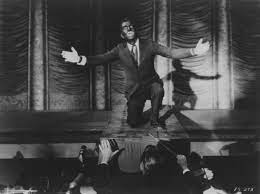 Al Jolson was born under the name “Asa Yoelson,” in a small Jewish village in what is today Lithuania, and was himself the son of a cantor. The family emigrated to New York when Jolson was ten years old. Eventually, he became wildly successful on stage, and was in fact at one time probably the most popular entertainer in the country. He was also known as “the King of Blackface,” and was credited with introducing a wide variety of music that had previously been almost exclusively enjoyed by Black people to white audiences.

The reason blackface is considered such a third rail today is because of the way it was used by so many performers, such as in “minstrel shows,” to mock Black people and play up stereotypes. There is at least an argument that the way Jolson used it is different. In essence, he found that white audiences were more receptive to listening to “black” music if it was performed by a man in blackface. Jolson actually had a very close relationship with the Black community, becoming one of the first performers to put Black people in his own shows. Which all doesn’t make it any less weird watching somebody in blackface where we’re just supposed to go with it. Even more than that, in this movie Jolson doesn’t just perform in blackface, he does serious scenes with it on. It’s sort of used as this delineator that he’s in stage mode instead of religious mode. The problem is that it’s very hard for me to take seriously anything he’s saying or doing with the very stupid makeup on. 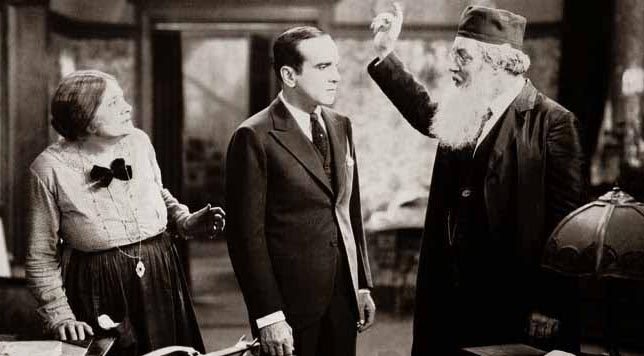 Anyway, The Jazz Singer was a massive success that changed the Hollywood game forever. Its remains by far the best known film of its director, Alan Crosland, who was selected more for his technical expertise than for his artistic prowess. I note that his debut was a 1915 film entitled Santa Claus vs. Cupid, which I’m sure was the Batman vs. Superman of its day. Samson Raphaelson, who wrote the play the movie was based on, took the opportunity to switch over to movies and ended up as a screenwriter for classic directors like Lubitsch and Hitchcock. Warner Oland, meanwhile, who plays Jakie’s angry dad in a big bushy beard, went on to fame playing a series of Asian roles, despite not being actually Asian. His most popular role was Charlie Chan in a long series of movies.

The Jazz Singer’s place in movie history, as the first successful sound film and bringer of the sound revolution, is assured. But it is also perhaps a case study in the idea that the first is not always the best. I think it’s clear that The Jazz Singer doesn’t come close to still holding up today. In any case, it will never be possible to recapture how those early audiences felt when they saw it, and that’s probably OK.