In some ways Barry Lyndon functions as the most Kubrickean of Stanley Kubrick’s movies, because he takes the same subject matter that could be either swashbuckling or a melodrama (or both) and regards it coldly and matter-of-factly. For three hours. This may not sound like a recipe for entertainment, but I find the movie fascinating from beginning to end. For me, the hallmark of Kubrick is the way every shot feels consciously constructed and composed, with no regard for budget or technical limitation. Few movies make us so conscious of their shot composition as Barry Lyndon. There is a popular YouTube channel that breaks down movies called “Every Frame a Painting,” and in few films is that appellation so appropriate as this one, which very consciously adopts the look and feel of contemporary paintings of the early 1700s. Roger Ebert wrote that Kubrick shoots the movie as if he is shooting a still life. Yet in order to achieve this, great technical achievements were necessary. Many of the interior scenes were lit only by candle-light, in an effort to show how lighting would have truly been at the time, but in order to do this the production had to use the latest low-light cameras, using technology that had originally been developed to photograph the moon landing.

The original novel by William Makepeace Thackeray has been called “the first novel without a hero,” in the sense that the titular rogue at its center is hardly heroic. We watch Redmond Barry (who later changes his name after marrying Lady Lyndon, played by Marisa Berenson) scheme his way up the ladder in, not one, but two armies, make a living out of cheating at cards, marry a lady for her title and money, and fight multiple stupid duels. His lone redeeming quality seems to be that he loves his son (David Morley), but he cannot extend the slightest iota of this affection even to his stepson (Leon Vitali). He is played by Ryan O’Neal, who may have been a handsome or suave leading man in other roles, but here seems whiny, petulant, and scheming. When bad things happen to him (and they do a lot), he always seems just on the verge of tears but never quite breaks out into them. 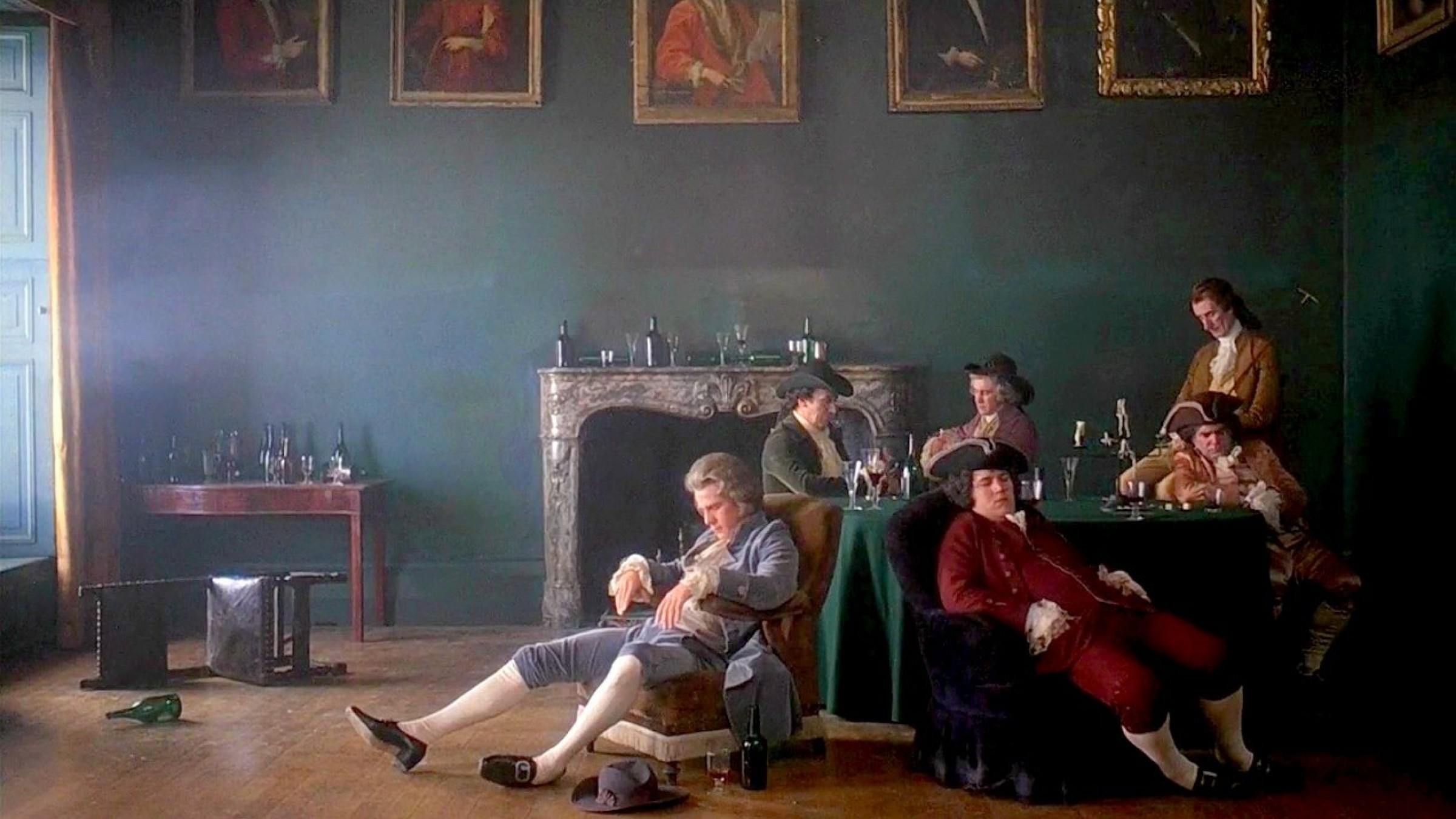 The story follows Lyndon’s life, as was common in novels of the time, from birth to death. The movie is not interested in the slightest in creating suspense about what might happen to him during the course of that life. We learn before the halfway point that Barry himself is doomed, and we learn of his son’s death via narration several scenes before it actually happens. Kubrick’s use of a dispassionate, omniscient narrator (Michael Hordern) gives the entire affair the feel less of a story, with a beginning, middle, and end, and more of an academic dissection. Why is Barry like this? Why are humans in general like this? In the meantime, he is someone to whom things happen, rather than someone who acts upon events. He only reacts as he must.

Kubrick shot the movie over an extraordinarily-long period of 300 days, much of it in Ireland. No expense was spared, and few period costume dramas can claim to be quite so ornate. In our article on The Leopard, I marveled at the spectacularly gilded interiors of the final ballroom sequence. Barry Lyndon managed a similar effect throughout much of the movie. Kubrick emphasized the look of the interiors by using a variety of filters and natural lighting techniques. In a few moments viewers may notice the actual natural light coming from outdoors takes on a slight blue tinge in warmly-lit interiors, because of the lenses that were used. Just as the characters are often dwarfed by the rooms they’re in, they also spend many shots being dwarfed by the landscapes around them. It is not as if there are no close-ups in the movie, but Kubrick resists them in many scenes. And for a movie that spends quite a bit of time showing us the Seven Years War, very little time is shown actually depicting the fighting (which Barry does everything he can to avoid, anyway).

Instead, the movie is much more interested in the facades put on by the upper class of the time, and, by implication, people in general. Whether it’s the weird way a marching British officer in early scenes fixes his eyes firmly to his side in an unnatural position, or the lengthy and circuitous conversation between a tutor (Murray Melvin) and Barry’s mother (Marie Kean) when she basically fires him. Even the duels through which disputes are settled, which at least twice in the movie drastically disrupt Barry’s life, are driven entirely by honor and arbitrary sets of rules. Like the title character in Hamilton, Barry’s final downfall comes from firing into the ground during a duel, not out of the goodness of his heart but because he perceives, correctly, that it is what the arbitrary systems of honor and duty at the time demand of him.

The obvious point of comparison for Barry Lyndon is Tom Jones, the Best Picture winner based on a novel from about the same time, also a picaresque adventure of a rogue. That movie, however, wants us to root for the hero, and casts a magnetic Albert Finney in the title role. It is interested in projecting a frenetic energy, instead of contemplating any grand visuals (it is, in fact, a movie mostly without grand visuals). Here, the visuals are as much the point as anything, and Ryan O’Neal’s performance is a lot of things, but magnetic is definitely not one of them. Certainly the two stories are not exactly the same, but it is also as if Kubrick has made the conscious decision to distance the audience from his title character as much as possible. It progresses not with freneticism but inexorability. Many of the scenes are accompanied by the slow but insistent refrain of Handel’s “Sarabande,” over and over and over.

Certainly, until fairly recently Barry Lyndon was seen as one of Kubrick’s lesser works by some, receiving criticism for its slow pacing and cold emotional pallet. Others would simply tell you it was boring. Yet it has come more and more into vogue in recent years, for what are likely complicated reasons. One is certainly that, for someone like me who loves to analyze the structure of movies, to look at the choices were made and why they were made, this movie is a gold mine. Movies are not just their stories, they are the series of visuals put up on screen. Few movies over the years have as specific a vision behind them, for better or worse, as Barry Lyndon.