The latest film from director Paul Schrader, The Card-Counter, starring Oscar Isaac, is being released today in at least some theaters. Schrader has, throughout his career, found his niche in focusing on highly flawed male central characters who take direct action, rather than just talking about what they’re going to do, starting with his screenplay credits on Taxi Driver and Raging Bull. Schrader then moved into directing with 1978’s Blue Collar, and has had an ongoing career in both capacities up through the present day. In 2017, his First Reformed (in which Ethan Hawke plays a Christian minister faced with various unfortunate realities) became one of those movies I kept hearing critics bring up as the best of the year, but was not actually seen by anyone I know or ever noticed by me as even being in theaters.

Perhaps Schrader’s most acclaimed directing effort to date was 1985’s Mishima: A Life in Four Chapters. It is pretty much entirely in Japanese, stars Japanese actors, and was filmed in Japan (Schrader’s wife, Chieko, spoke Japanese as a first language and both helped translate the script and translated for Schrader on set). However, partly because of opposition from the widow of the film’s subject, the author Yukio Mishima, as well as various other Japanese rightist groups, the film has never been shown in theaters in Japan, which would seem to be the primary market for it. For this reason, Mishima became something of a financial disaster, but it has certainly endured in cinemaphile circles. 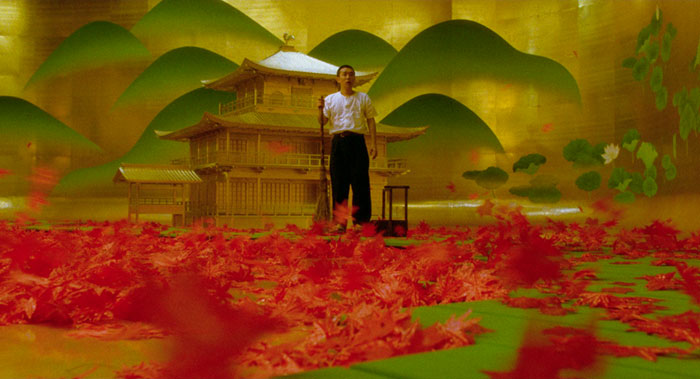 Those rightist groups opposed the movie, in part, because they thought it depicted Mishima as a homosexual. I have watched the movie and I don’t think I noticed that bit, though I have to confess that might be because I was completely lost for long stretches of this thing. It is a very rare movie that genuinely loses me as to what’s going on (people who lean over and whisper questions about what’s going on, a common feature of movie-going in my youth, let’s say, drive me nuts), but this is one of them. I don’t mean to say that it’s unclear or that’s it’s some fault of the movie, but that I made incorrect assumptions that I didn’t realize were incorrect for about seven eighths of the movie, and by the time things clicked into place I felt like I had missed some things.

My confusion stemmed from the way Mishima interweaves the story of the life of the real-life Japanese author with those of three of his novels. We are supposed to be cued into the switching between the storylines because the scenes from the novels are played entirely on what are basically stylized stage sets. It’s an absolutely spectacular movie from a design standpoint. This should have been obvious, but it took me a long time to figure out what was “real” and what was in the novels. The lead characters in the novels are all played by different actors, as well, but at first I thought they might be playing Mishima at different stages of his life, like the actors playing Pu Yi in The Last Emperor. They were not. 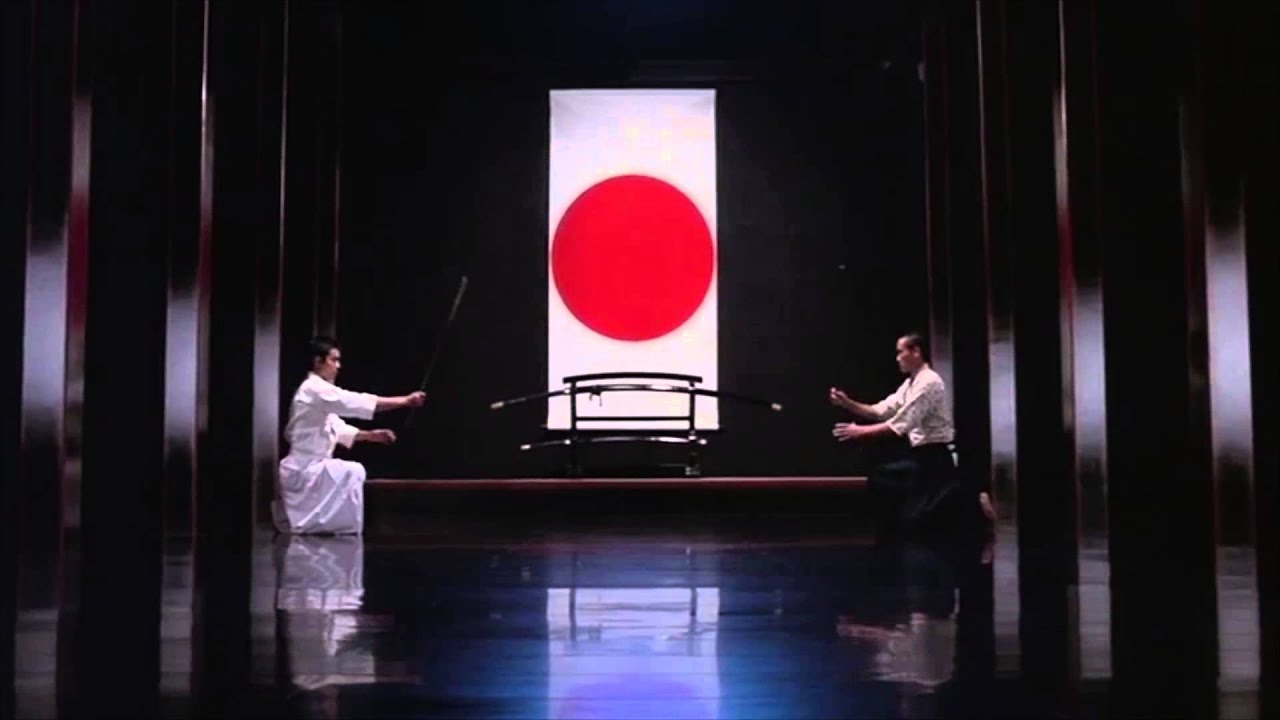 The big thing for “Western” audiences to know about Yukio Mishima (played in the film by Ken Ogata) is that his life is not what you might be expecting from your usual biopic of an author. He first came to prominence in Japanese literary circles in the aftermath of World War II’s utter destruction (the movie postulates that he lied about being sick to get out of army duty, which may or may not have happened in real life, depending on how autobiographical Mishima’s novels were). Over the course of his life, he completely transformed his own body (with obsessive bodybuilding) and became heavily involved with reactionary Japanese groups advocating for a “return to tradition” (for example, to return power to the Japanese military and, ostensibly, the Emperor himself). Bizarrely, Mishima basically was able to gather his own private army of disillusioned young men (or maybe we should call it a cult), which was even allowed to train on Japanese military bases by sympathetic officers. Then, on November 25, 1970, Mishima and four of his followers attacked a military base in Central Tokyo, took the commanding general hostage, and forced him to gather the base’s soldiers so that Mishima could make a speech. Mishima’s speech was intended to inspire the soldiers to rise up against Japan’s post-war democratic government, but they mostly laughed and jeered, and Mishima then committed seppuku, a form of ritual suicide, in front of everyone.

So if you think about it, it’s not surprising that the story of Mishima struck a chord with the same guy who wrote Taxi Driver. That quixotic attack on the army base forms the fourth of the four episodes of the film. The other three cover other phases of Mishima’s life, intercut with three of his novels. By the end, his own suicide is shown as paralleling the deaths of his three main characters at the end of each of their stories. The stories-within-the-story cover a stuttering monk (Yasosuke Bando) who, hearing that Japan has surrendered in World War II, burns down the beautiful golden temple he was sworn to protect, with himself inside; a struggling playwright (Kenji Sawada) who “sells himself” to an older woman and ends up getting pulled into sadomasochism; and a group of young right-wingers who try to rebel against the government and end up committing suicide, which seems relevant to Mishima’s eventual actions. 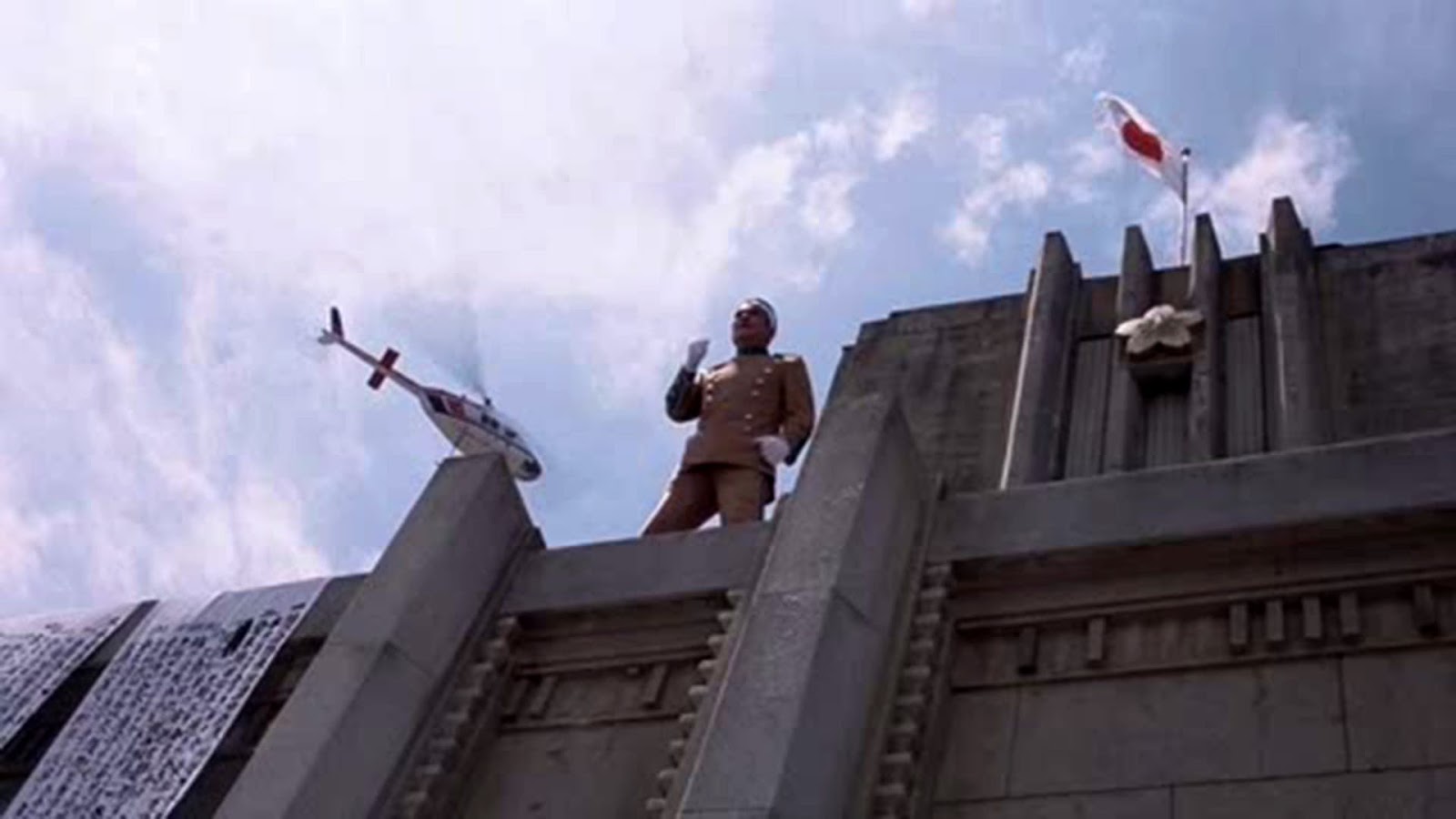 Because I feel like I missed something essential about it early on, I’m not sure I’m in a great position to judge how effective the film actually is at what it’s trying to do. Both Mishima and his characters are given to dramatic pronouncements, and that is, if anything, an understatement. When a police interrogator (Hiroshi Katsuno) asks one of Mishima’s young revolutionaries (Toshiyuki Nagashima) how he can ever hope to achieve the “purity” he claims to seek, the man replies, “By turning one’s life into a line of poetry written in a splash of blood.” Other lines include, “Only knowledge can turn life’s unbearableness into a weapon,” and “Only art makes human beauty endure, you must commit suicide at the height of your beauty.” But does the movie actually lend us any kind of insight into how Mishima ended up on the track that he did, and ended up in the place that he did? I’m not sure. Maybe it’s in there, but if it is, I missed it.

All of that said, from a visual perspective and in a design sense Mishima is absolutely next level. Schrader hired a local Japanese designer after seeing some of her fashion shoots to design the sets, only to discover that, without film experience, she created sets with only the visuals in mind, not realizing that, say, one of the walls of a prison cell had to come out so that they could put the camera there. It is set to a score by the great composer Philip Glass, who was working on his first fictional film project (he had previously scored a few documentaries). It sounds, to some degree, like everything Glass has ever written, with no “Japanese” or “Asian” touches at all (perhaps thankfully), but it does serve to lend an air of inevitability and churning history to the proceedings.

The version I saw on The Criterion Channel was narrated by Ken Ogata, in character as Mishima. The original release was actually narrated, in English, by the actor Roy Scheider, but this has been left out of some subsequent versions (there are DVD releases that give you the option). While I suppose it makes sense to have the narration being done by the same actor as is playing the main character, I can’t help but wonder if something else had been done to differentiate the narration if I might have been actually able to follow the movie. Mishima ended up as a weird movie that was too Japanese to really make any headway in the US but too controversial to actually be shown in Japan, even up until today. But I definitely found it a worthwhile digression, simply because no other movie I’ve seen is remotely like it.