I greatly enjoy Jurassic Park every time I watch it, because it absolutely nails the “sense of wonder” one would get from actually seeing dinosaurs in real life and also, perhaps miraculously, the special effects still completely hold up. Consider that The Phantom Menace came out six years after Jurassic Park, and I would argue that the CGI in the former very much looks dated in 2021, while the latter still looks like it could have come out last year. On a basic level, I disagree with Jurassic Park’s basic attitude towards the idea of reviving dinosaurs, best summed up by Jeff Goldblum’s character as “your scientists were so preoccupied with whether they could, they didn’t stop to think if they should.” Of course, the story of science “flying too close to the sun” has been a common theme since the beginning of science fiction, as in Frankenstein. But my position is, if we can clone dinosaurs in the modern age, we 100% should do that, and I would pay all the money to go see them.

The story of Jurassic Park is surprisingly streamlined (and cuts out about 75% of the book). There is sort of a bad guy (played by Wayne Knight), but he is mostly incompetent, and, once his plan goes into motion, very quickly gets eaten by a Dilophosaurus. Instead, director Steven Spielberg, at the height of his Spielbergian powers, is content to concentrate on alternating between that open-mouthed astonishment at how cool all this is and the overwhelming destructive power of nature, as represented by the Tyrannosaurus and Velociraptor. It is semi-conventional wisdom among movie people that there are two lines of Spielberg movies, the huge crowd-pleasers and his attempts at “serious art.” Jurassic Park came out the same year as Schindler’s List, and I think there’s a decent argument that these are respectively the best of the two types of Spielberg movie. 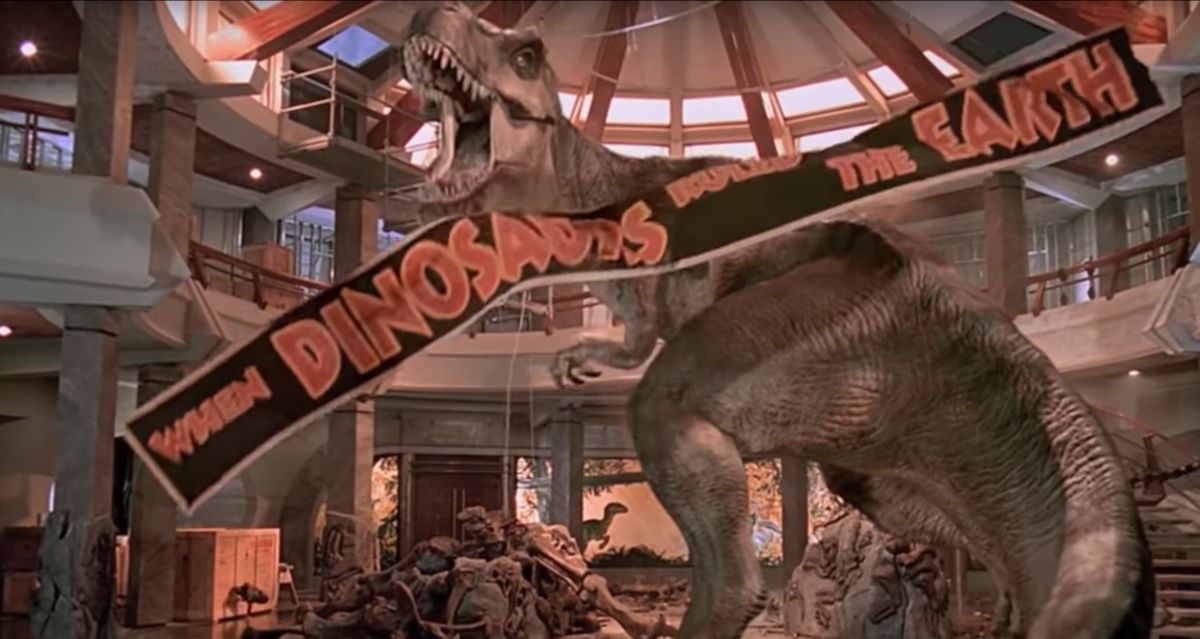 All of the casting in the movie is surprisingly erudite, perhaps because Spielberg had so much power at the time that he could cast whoever he wanted, and I think that also contributes to the movie’s enduring appeal. The plot centers around two paleontologists (played by Sam Neill and Laura Dern), who I think most people watching the movie assume are romantically involved, even though, interestingly, the movie never actually says this. They are tapped by a billionaire mogul named Hammond, played by the extremely respected British actor/director Richard Attenborough (who many may not realize was the older brother of famed naturalist David Attenborough), to vet his soon-to-open “nature preserve” on an island off the coast of Costa Rica. What he does not tell them until they arrive it is that it is basically a zoo for dinosaurs, which he has cloned from trace amounts of DNA he was able to find inside prehistoric mosquitoes preserved in amber. Attenborough is basically playing a disarmingly jovial, Scottish Richard Branson-type. He seems like an extremely nice guy, and his heart is in fact in essentially the right place. But he basically causes all of the problems in the movie through both his own hubris and his own failure to pay his workers enough, and also is not very receptive to other people’s ideas.

So anyway, in addition to Neill and Dern, Attenborough’s character also brings a “chaos theory” scientist played by Jeff Goldblum. Why is unclear, but Goldblum steals most of his scenes, and later when he’s attacked by a Tyrannosaurus the primary consequence seems to be his shirt gets mostly ripped off so we can witness his majestic hairy chest. I think there’s an argument that this is the most fun of Goldblum performances, and pretty definitely the most iconic. This group is joined by Hammond’s two grandchildren (Joseph Mazzello and Ariana Richards), because Spielberg just couldn’t resist. The first part of the movie is this group going around and looking flabbergasted at the dinosaurs, and the second part is when the park defenses (due to the general hacking of Knight’s character) go down in the middle of a hurricane, most of the dinosaurs get loose, and the movie turns into basically a monster thriller.

The dinosaurs are portrayed by a mix of these beautiful robot things created by special effects wizard Stan Winston and early, ground-breaking computer special effects. Computerized effects of this type were so new that the original plan for the movie was to use stop-motion animation, a la the original King Kong, for the wide shots of the dinosaurs. Spielberg then saw an experimental use of CGI and it was way better looking than he had anticipated. The story goes that he then turned to the stop-motion animation guy and told him, “Looks like you’re out of a job.” To which the guy replied, “Don’t you mean extinct?” This line was later worked into the script between Neill and Goldblum’s characters. Anyway, the dinosaurs used in close-ups are perhaps the best use of animatronics in modern movies. It’s unfortunate that few movies do this kind of thing today, instead relying on the computer graphics that this movie pioneered. The CGI here still holds up, but the “real world” special effects unsurprisingly look way, way better.

I have not mentioned Samuel L. Jackson’s cigarette chomping computer technician, who gets the much-quoted line “Hold on to your butts!” or the great scene of Brachiosaurus heads appearing above the treetops and singing to each other like whales. Jurassic Park, for all of its quirks, really is a great movie. I would submit that some of the individual plotlines fall a little flat (the kids seem to mostly be in the movie to be put in peril, and annoy the hell out of me in every scene that they’re in), but I am more than willing to forgive that kind of thing if you put awesome dinosaurs in your movie. All of the adult performances are uniformly great (in addition to Goldblum, I think that Dern is doing some particularly great work here), and Spielberg pulls off some really great thriller/action sequences. The hurricane sequences work so well partly because they are not special effects, there was in fact a hurricane in the middle of production that many of the scenes were shot during. Jackson’s character’s death at the hands of Velociraptors takes place off screen (leading to a genuinely scary scene where Dern unexpectedly finds his severed arm), but in fact an elaborate set had been built for a chase sequence and his eventual death scene that was destroyed by the hurricane, so the production improvised.

Of course Jurassic Park started a franchise that is still ongoing. Spielberg directed one direct sequel with several of the same actors, subtitled The Lost World after a very old-timey dinosaur movie based on a really great Arthur Conan Doyle adventure book. There was then a third sequel that was less successful, followed years later by two Jurassic World “reboots” with Chris Pratt and Bryce Dallas Howard, directed by Colin Trevorrow, with a third on the way. I thought the first of these was fine, and the bits I’ve heard about the second one made me not particularly want to see it. The point is, the original Jurassic Park is, while not a perfect movie, deservedly a classic, and deservedly wildly successful. It broke the record at the time for the biggest opening weekend (yes, there was a time that record was held by a non-franchise movie) and held the record for the largest all-time worldwide gross box office for five years until its record was smashed by Titanic. That there were sequels was inevitable, but none of them have come even close to capturing the magic of the original. If you’re a Millennial (or any other generation) who has never checked out Jurassic Park, I would heartily recommend it.