Some stories seem to tap into something elemental within society, and because of this they end up getting told over and over in different ways. Invasion of the Body Snatchers struck such a chord on its release in 1956, and has remained relevant to the extent that it has been directly remade three separate times, with a fourth remake apparently in development, along with several extremely similar movies and TV shows that would certainly not exist without it, such as 1998’s The Faculty, 2013’s The World’s End, and the 2005 ABC series Invasion. There have also been two movies made out a very similar Robert Heinlein novel, The Puppet Masters, a Looney Tunes parody titled “Invasion of the Bunny Snatchers,” an episode of SpongeBob Squarepants using the exact plot of the movie, and a racist-sounding National Lampoon parody titled “Invasion of the Money Snatchers,” described by Wikipedia as “the gentile population of Whiteville is taken over by pastrami sandwiches from outer space and turned into Jews.”

The point is, Invasion of the Body Snatchers is sort of the archetypal paranoia-based thriller, and therefore seemed to bring to light specific elements of the American psyche. Those who created it have generally declined to assign the movie, and the book it is based on, a specific political or metaphorical meaning, so instead it is one of those things where everyone can see in it what they want to see in it. Many assumed upon the movie’s release that it was saying something about the Red Scare, such as the way people suddenly start going after their neighbors, but other, more conservative viewers thought it was just as obvious that the movie was about the dangers of communist infiltrators, who could be your own friends and neighbors, hiding in plain sight. Later generations have found their own meanings in the original movie and its many subsequent versions. Meanwhile, the term “Pod People,” coined by Body Snatchers, has entered the general lexicon, though, again, its meaning can change depending on who is using it. Pretty decent for a low budget sci-fi movie from a minor studio that was originally released in the US on a double bill with something called The Atomic Man. 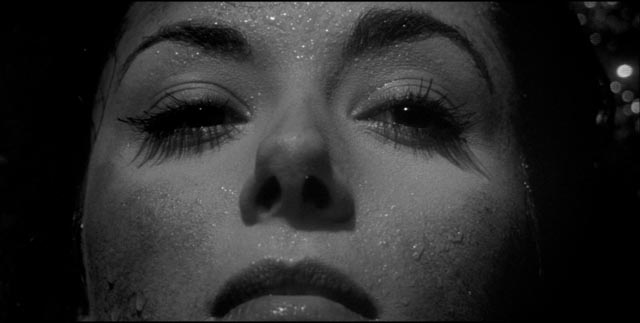 Invasion of the Body Snatchers takes place in a small California town, where the town doctor, Miles (Kevin McCarthy), returns from a conference to find that something is off with people in his town, receiving several complaints from people that members of their family aren’t really their family. Chalking this up to some weird epidemic of hysteria, he tries to go on a date with an old school friend named Becky (Dana Wynter), only for them to realize mid-date (after a friend finds one of the pods in their greenhouse) that, in fact, what is actually happening is that the residents of the town are being replaced by alternative, alien people grown from “pods,” looking like big plant seeds or something. The “pod people” do not feel emotions and are trying to take over the world, or as they would put it, “bring peace to humanity.”

Eventually, Miles and Becky flee out of town up into the nearby hills (the aliens have cut all the phone lines into and out of town, apparently), absolutely exhausted, a la the characters in A Nightmare on Elm Street, because they can’t fall asleep. Miles tries to kiss Becky to help her stay awake (solid plan, bro) but she falls asleep for a moment anyway and immediately wakes up as one of THEM. He runs and ends up by a highway, where he tries to run in front of the cars, waving his arms and yelling things like, “You’re next!” and “They’re already here!” Nobody stops.

This was the original, somewhat bleak ending of the movie, but the producers didn’t want to end with “the evil aliens win,” and so forced director Don Siegel to shoot a framing story in which Miles explains to a psychologist at a hospital how he came to be running around crazily on the highway. The psychologist doesn’t believe him until another patient comes in, having been crushed by “giant plant pods” that fell off a truck. The psychologist immediately starts phoning various authorities to organize resistance to the aliens. Generally, critics have agreed that the movie is better off without the framing story, and has been left off in many DVD releases. The version I streamed on Amazon Prime had the framing story, and I mean, I was fine with it, though I agree leaving it off would have been more dramatic.

Invasion of the Body Snatchers is based on a 1954 novel by Jack Finney, which had an original cover with the amazing tagline: “Was this his woman — or an alien life form?” Interestingly, the novel has a more optimistic ending than any of the movie adaptations, with the aliens leaving because the humans offered more resistance than they expected. Finney insisted that he did not intend any political allegory whatsoever. His other most famous novel, Time and Again, has yet to be adapted into a movie, though there have been a few abortive attempts. Carl Sagan apparently thought it was the most “realistic” time travel story he had read.

The story, in both book and movie, is the stuff of a very cheesy B-movie, with the silly foam alien pods, and quite a bit of that old low-budget movie trick where someone looks through a door or a window and then excitedly describes what they’re seeing to someone else (though we as audience do not actually get to see it, because that would have cost way more money). I like that kind of thing as much as anyone else, if not moreso, but Invasion of the Body Snatchers is so good at what it’s trying to do, especially once its momentum starts to build, that it transcends those roots. It is a thriller that actually thrills, so to speak.

This also helps the movie cover up the fact that it doesn’t quite take the time to actually make sense. The movie’s most memorable scene is probably Becky’s transformation into a pod person (the only one in the movie that actually happens on-screen), but if you think about it for a second it seems to contradict the movie’s own internal logic. So, these pods are growing copies of humans, and then those copies replace people while they’re asleep (the movie never quite says what happens to the original people’s bodies, though both the book and the popular 1978 remake postulate that the original people basically crumble to dust when they’re replaced). But Becky seems to go to sleep and then wake up as a Pod Person, no replacement necessary. So… how does that work? It seems the movie went for the most dramatic thing over actually making sense. But most people don’t spot this at the time. To use a term from the “TV Tropes” website, this is “Fridge Logic,” that is, things you think about when you go get stuff out of the refrigerator after the movie.

The director of Body Snatchers was Don Siegel, who had a long Hollywood career. He started out doing “montages” for higher-rent movies (he created the opening credits for Casablanca), then transitioned to directed lower-budget features. In 1964 he directed an acclaimed adaptation of Hemingway’s The Killers, after which he received more prestigious gigs. In the latter phase of his career, he directed several movies starring Clint Eastwood, including the original Dirty Harry. Eastwood, for his part, gave Siegel a small role as a bartender in Play Misty for Me, and added the dedication “For Don and Sergio” to the closing credits of Unforgiven.

If you’re thinking Invasion of the Body Snatchers may not be your cup of tea because you aren’t normally the sort of person to watch cheap sci-fi movies from the 1950s, you should know it’s not really like that. Or maybe it’s better to say that it is like that, but also works as a movie generally in a way a lot of its contemporaries do not. Moreover, it is one of the ultimate expressions of on-film paranoia. Your own loved ones could be the villains, you just haven’t realized it yet.

One thought on “INVASION OF THE BODY SNATCHERS (1956)”