First of all, a big thank you to everyone who has watched along with us for HorrorFest ‘21, and especially to everyone who took the time to vote in our Halloween feature poll. We have reached the closing movie of our virtual film festival, and the winner of our poll, The Frighteners. I wondered, when doing some initial research, why basically all I knew about this movie was the title, given that it was director Peter Jackson’s final prior to the Lord of the Rings trilogy and had Michael J. Fox in the title role. At first I thought, oh, this is sort of an interesting riff on a Beetlejuice kind of movie, with a lot of overly ambitious 1990s CGI. In the end, however, it became apparent that the reason most people don’t know much about The Frighteners is because it is really not a good movie.

Fox (not young, hotshot, Michael J. Fox, but Spin City-era, dishevelled Michael J. Fox) stars as a professional “paranormal psychic” named Frank who frequents funerals giving out his card. The world at large mostly thinks he’s a conman, and we soon learn that he basically is, but not of the kind people think. He can in fact see ghosts, and in fact several of them live at his house. They then go out and scare people by making their beds levitate, etc., so that they will call Frank, after which he shows up with weird ghost-hunting-type equipment and upcharges them like a two-bit plumber. 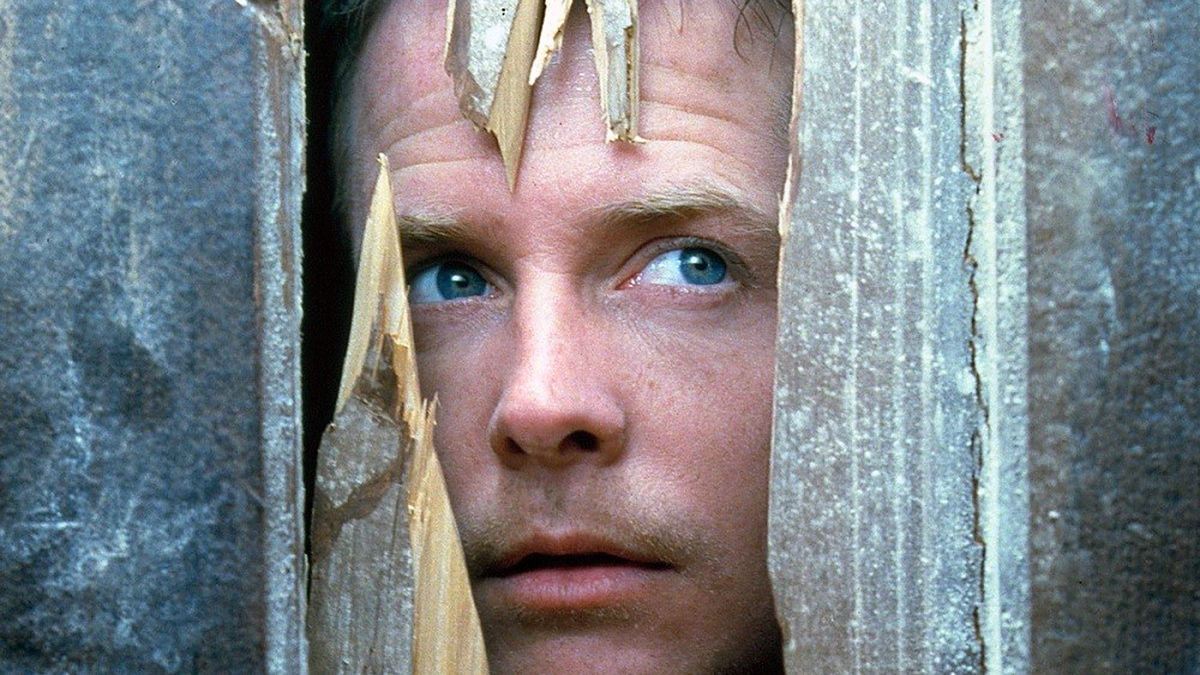 This, in fact, sounds like a very fun premise for a comedy that I would watch, but the movie basically loses interest in it entirely after about half an hour. A ghost thing that looks like the grim reaper is giving people heart attacks, which an unnecessarily idiosyncratic (read, completely insane) FBI agent (Jeffrey Combs) is obsessed with pinning on Frank somehow, and also Frank is also having sort of a romance (or more accurately, a random woman he meets seems to be interested in him for no reason) with a doctor played by Trini Alvarado. There are a few more twists and turns in there, all of which the movie heavily telegraphs.

For parts of The Frighteners it seems very much to want to be a somewhat silly comedy, in other parts a big effects-heavy summer blockbuster, in other parts a straight horror movie. This mix would work better if the movie seemed to have given any thought to it, but it simply seems to do what it wants from moment to moment. In fact, There are no real attempts to dwarf any kind of structure or pacing in the movie. Thus, while it is not “too long” in any objective sense, the whole thing comes in under two hours, it feels very, very long. I found myself thinking the movie had to be in its final few minutes at one point only to discover there was another half an hour to go. I felt the same way about halfway through, honestly.

Where you can feel the interest of director Peter Jackson and his team is in the movie’s copious special effects, which it deploys in our face at all times. The computerized ghost effects in this movie (on full display in the opening scene) come off as very dated, but some other bits work pretty well. But the effects are not interesting enough to carry the movie in the absence of other things. Also, the rules of this world are haphazard and weird, and seem solely to be “whatever we think would be interesting right now is allowed.” This is a movie with multiple scenes where ghosts shoot at each other with machine guns. Ghosts also “kill each other” multiple times, but the movie seems to be entirely uninterested in what this actually means.

The story does little to help its actors out, either. Fox is never not charismatic, but he is barely given anything to work with. Similarly, the rest of the cast is either sleepwalking through the movie or completely chewing the scenery down. Longtime character actor Jeffrey Combs is the biggest example of the latter, as a bizarre FBI agent with a list of quirks as long as one of his own heavily-scarred arms (“My body is a roadmap of pain!”), who feels like he’s in a very different movie.

Peter Jackson, a native of Wellington, New Zealand, started out making cult-favorite “splatter” movies like Meet the Feebles and Braindead, before rising to further international acclaim with Heavenly Creatures, co-written with his frequent writing partner Fran Walsh, a psychological drama about two teen girls in 1950s New Zealand (played by Kate Winslet and Melanie Lynskey), whose twisted friendship ends in them murdering one of the girls’ mothers. The movie won awards at Venice and an Oscar nomination for Best Screenplay, allowing Jackson and Walsh entry into higher-budget Hollywood circles. The first movie they produced in this vein would be The Frighteners, a script that had previously been bought from them by American special effects guru Robert Zemeckis, who had intended to direct the thing himself, but he eventually decided to give the project back to Jackson and Walsh. They then convinced Universal Pictures to allow them to make the movie entirely in New Zealand, which the studio agreed to on the condition that New Zealand be made to look like the American Midwest.

However, The Frighteners turned out to be a mess, and was a complete dud at the box office. Jackson long blamed Universal for mismarketing the movie, something they certainly did, but it’s not as if this was too smart for the room or anything. Universal released this obviously Halloweeny movie as a summer blockbuster, even opening the movie on the same day the 1996 Summer Olympics opened. The movie got overall positive reviews, but the people who didn’t like it really didn’t like it. Even Jackson’s local paper in New Zealand said the movie felt like it had been “built from the rubble of other, better movies,” which feels pretty accurate. He responded by suing them (speech laws are different there) but the lawsuit was soon dropped.

I am sorry not to have more interesting things to say about the last movie of HorrorFest ‘21. I love bad movies, but The Frighteners is less aggressively bad and more just not that interesting. That’s, well, interesting, because Peter Jackson’s next three movies, the Lord of the Rings trilogy, are my favorites. That’s why I thought The Frighteners would be worth watching. But it really is not.