It seems strange to consider today, but when Dracula came out in 1931, movie studios were genuinely unsure whether audiences would like horror movies at all. Certainly there were scary silent movies, but none that were massive hits in the U.S. The only reason Dracula got made is because the son of the studio head at Universal thought it would be a good idea, and his father basically went, “well, fine, but this is your problem, not mine.” But either because audiences were ready for a really atmospheric horror movie, because of Karl Freund’s deeply evocative cinematography, or just because of Bela Lugosi’s deeply weird but also pitch-perfect somehow performance as the title character, Dracula turned into a massive hit and launched a whole fleet of monster movies.

In my opinion, Dracula remains remarkably effective for a movie that was made so early in the sound era that there isn’t an original score because it was thought to be too expensive. I actually thought the eerie silences enhanced the atmosphere, though there have been several later scores composed, including one by Phillip Glass that was included as an option with the 1999 DVD release. Universal even distributed a silent version of the movie because a decent portion of theaters hadn’t yet been outfitted for sound. Yet, in particular during the early sequences in Transylvania, the movie has a sense of scale and creepiness that entirely justifies its reputation. 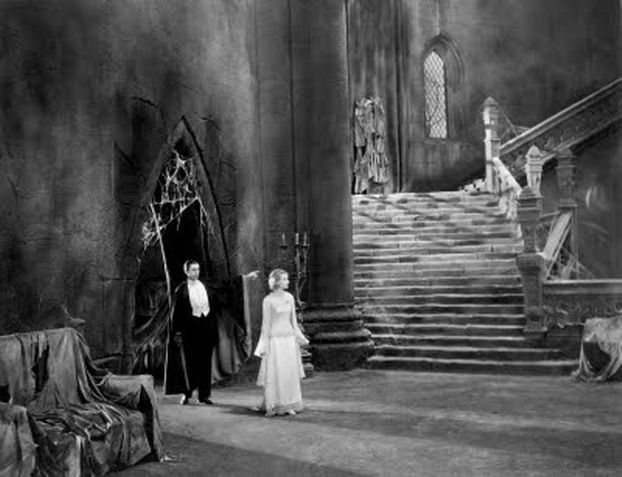 After those sequences in Transylvania, and the arrival of a ghost ship in London with everyone on board apparently dead, except for Renfield (Dwight Frye) who is raving mad, the movie settles into an almost anti-climactic drawing room story. Dracula insinuates himself into the family of his upper-class neighbors, especially one Mina Harker (Helen Chandler), but meets his match in the vampire hunter Abraham Van Helsing (Edward Van Sloan). These scenes are heavily dependent on the recent Broadway stage play that directly inspired the movie, and aren’t nearly as cinematic as the earlier bits (this is another movie that has a lot of bits where characters point excitedly out the window at something the audience is never actually shown). Both Lugosi and Van Sloan were actually reprising their roles from that play.

Originally, the plan was for horror icon Lon Chaney to play both Dracula and Van Helsing, for some reason, but Chaney died from aggressive lung cancer before production could begin, leaving the production to scramble to find a replacement. Bela Lugosi was born and grew up in Hungary, where he not only worked as an actor but also was instrumental in organizing an actor’s union. This ended up being the reason he had to flee the country after the failure of an attempted Communist revolution in 1919 caused a government crackdown on everyone who might be seen as left-leaning. Despite barely speaking a word of English, he eventually got the part of Dracula in that Broadway play, and learned English on the fly. As Dracula, he gives the part the air of a character that isn’t actually human but is pretending to be. His over-the-top mannerisms, formal dress, and frequent dramatic pauses (“I never drink… wine.”) enable him to believably enter into London drawing room society while still giving the audience the strong feeling at all times that there is something super off about this guy. Director Tod Browning and cinematographer Karl Freund enhance things with frequent use of a very interesting effect, pinpoint spotlights on Lugosi’s eyes. It is genuinely dramatic and unsettling.

Though obviously Lugosi is doing a very specific performance here, he was apparently not so unlike this character in real life. People on the set later recounted Lugosi stalking across the set, frequently whipping his cape around, sometimes stopping in front of mirrors and dramatically declaring “I am Dracula!” Despite his attempts to avoid it, Lugosi soon found himself completely typecast in the part. He returned to the role only once, in 1948’s Abbott and Costello Meet Frankenstein (by which point he was sort of desperate) but he also found himself typecast as a horror villain in dozens of (mostly terrible) movies, including five opposite Boris Karloff. Maybe the most memorable of these was White Zombie, in which he plays a Haitian zombie master plantation overseer, considered one of the first actual zombie movies ever. Unfortunately, he also became very addicted to morphine over the years, which he was initially prescribed for an old war injury he suffered fighting for Austria-Hungary in World War I (history is wild), even voluntarily checking into an early version of rehab.

This very sad later period in Lugosi’s life can be seen in the Tim Burton film Ed Wood, where an aging Lugosi is played by Martin Landau. Wood, sometimes referred to as the worst director of all time, loved Lugosi and put him into several movies prior to Lugosi’s death in 1956. Despite Lugosi being dead, he ended up with top billing in Wood’s Plan 9 from Outer Space anyway. This consisted entirely of random footage Wood had taken of Lugosi walking around a graveyard and standing in front of his house with no story in mind. Most of the footage of “Lugosi’s character” in that movie is Wood’s “wife’s chiropractor” walking around with his cape half in front of his face, pretending to be Lugosi.

Obviously Bram Stoker’s novel created the character, but it was the movie that established the story as one of those where everyone knows the basic beats and the interesting thing is to see how these particular people are presenting it, like Shakespeare or Jane Austen. Francis Ford Coppola directed an interesting version with Gary Oldman in the title role, while the great Christopher Lee played a fun, schlocky version of the character in several mid-century movies for British studio Hammer Films. But they are only a few of the notables to have played the character over the decades, including, ironically, Lon Chaney, Jr. (best known for playing the original Wolf Man), who replaced Lugosi in Son of Dracula. There is also a Spanish version that was filmed on the same sets at night while this movie was shooting during the day. A non-insubstantial percentage of critics say that movie is even better, but I’ve never actually seen it. It was thought lost for decades but a full version was eventually found in Cuba. It’s now on the Criterion Channel.

While this version of the story occasionally creaks under its own age (the lack of a score works, for example, but is very noticeable at times), overall it works way better than you might expect it to. I’d say it has a higher percentage of great scenes, for example, than its immediate Universal successor, Frankenstein. I actually just learned today that the same actor, Dwight Frye, plays both Renfield in this movie and “Fritz” (basically the proto-version of a character that today would probably be named “Igor”) in Frankenstein, which, despite having seen both movies and read a lot about both of them, never really connected for me. Of course, those two movies were so successful that they were followed by a long series of Universal horror films that are still beloved today, including The Wolf Man (a remake of which starring Ryan Gosling was just announced this week), The Mummy, and The Invisible Man, among others.

The performances are a bit broad, but they’re also really interesting to watch. Helen Chandler is just as interesting as Lugosi as Mina Harker, in her own way, and can certainly carry off a monologue. These were all people who had cut their teeth on silent movies or the stage, even director Tod Browning, who was a very interesting guy in his own right. I talked more about him in the article on Freaks, his follow-up to Dracula that was so controversial it basically torpedoed his career. Browning had directed Lon Chaney in a couple of his silent hits, but on Dracula his contributions are somewhat disputed by movie historians, with some accounts stating Browning wasn’t even on the set half the time and Freund’s contributions as cinematographer were much more significant.

Whatever the case, Dracula remains genuinely fun to watch. If it wasn’t, it wouldn’t have achieved the iconic status it has. Yes, the first half is so good that it makes the second half in London drawing rooms seem pallid by comparison. But Lugosi works so hard to make it work, it mostly does. You might like it even if arch 1930s camp is not your thing, is what I’m saying.