Sometimes you’ll hear a movie referred to as “ahead of its time.” You might not think so based on a bare description, but for few movies did this turn out to be more the case than Ace in the Hole. Its unrepentant cynicism, particularly regarding the news business, was reviled by critics at the time (some of the reviews I read genuinely felt like they were from an alternate universe), but it is often listed by modern critics as an all-time favorite for basically the exact same reasons the critics at the time didn’t like it. Ace in the Hole is often placed among film noirs, though it lacks the mystery or thriller aspect that we’re used to thinking of with that genre. A critic for Slate wrote, “If film noir illustrates the crack up of the American dream… Ace in the Hole is the exemplar of the form.” In 1951, the idea that the American dream might be “cracking up” was apparently not as resonant as it is today for some. In any case, this movie may be unique among film noirs in that you could basically make it with barely any changes as a modern day movie, not as a pastiche but just as a regular movie.

On its release, Ace in the Hole was in fact such a financial flop that its producers at Paramount attempted to change the title (to The Big Carnival) and release it again, apparently hoping people wouldn’t realize it was the same movie. This was before the internet. Anyway, this title was unsurprisingly not particularly enticing to people who didn’t know anything about the movie’s plot, either, and the movie never did make its money back for the studio. Today, the movie is mostly (but not always) found under its original title, including on TCM and the Criterion Channel, which are the places most people are likely to see it these days. 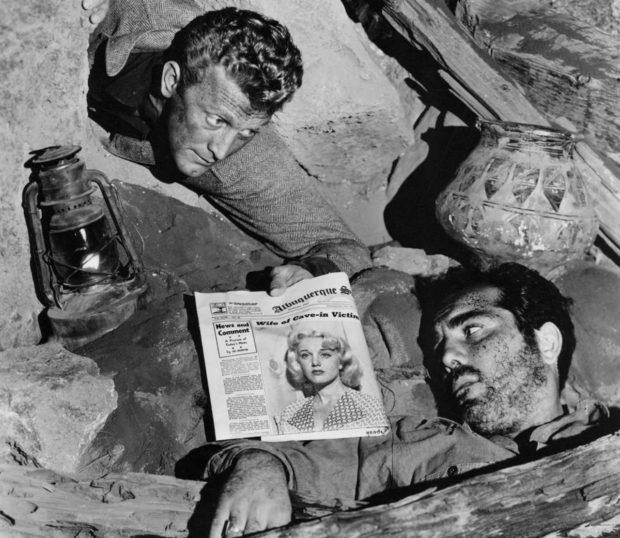 Kirk Douglas stars as a Chuck Tatum, a newspaper reporter that Wikipedia describes as “fiercely ambitious and newly sober.” Having seemingly been kicked off the staff of every major newspaper in the country, he has just arrived in New Mexico with a broken-down car and no money. The movie starts with him getting the editor of the local Albuquerque paper (prolific character actor Porter Hall) to give him one last shot, though he is clearly desperate to get out of Dodge at the first opportunity. Assigned with a cub photographer (Robert Arthur) to cover a “rattlesnake hunt” in a small desert town, Tatum stumbles into that ticket at a roadside rest stop, where he discovers that the proprietor, one Leo Minosa (Richard Benedict) has gotten stuck in a cave after a collapse (the cave was part of a Native American cliff-dwelling, and Minosa was scavenging for artifacts to sell). With a little bit of spin and chutzpah, Tatum completely takes over the situation and quickly turns Minosa’s plight into a massive national news story. The whole situation goes viral, if you will.

It is perhaps unsurprising if you have seen movies before that the situation gets out of control. Tatum manages to convince the local sheriff (Ray Teal) that the longer the situation goes on the better it is for the sheriff’s re-election chances, which leads to people not actually doing what they need to do to get Minosa out of the cave. He also finds himself fending off the blatant advances of the guy’s wife, Lorraine (Jan Sterling), who was saving up money to leave her lame husband and clearly does not care about him at all. That does not fit Tatum’s narrative, however, and when she threatens to take all the money she’s gotten by serving food to the descending national media and split, he straight up gets physically violent with her. Meanwhile, a literal carnival is set up outside the cave, complete with a guy playing a country music song he has written about Leo Minosa on a guitar. 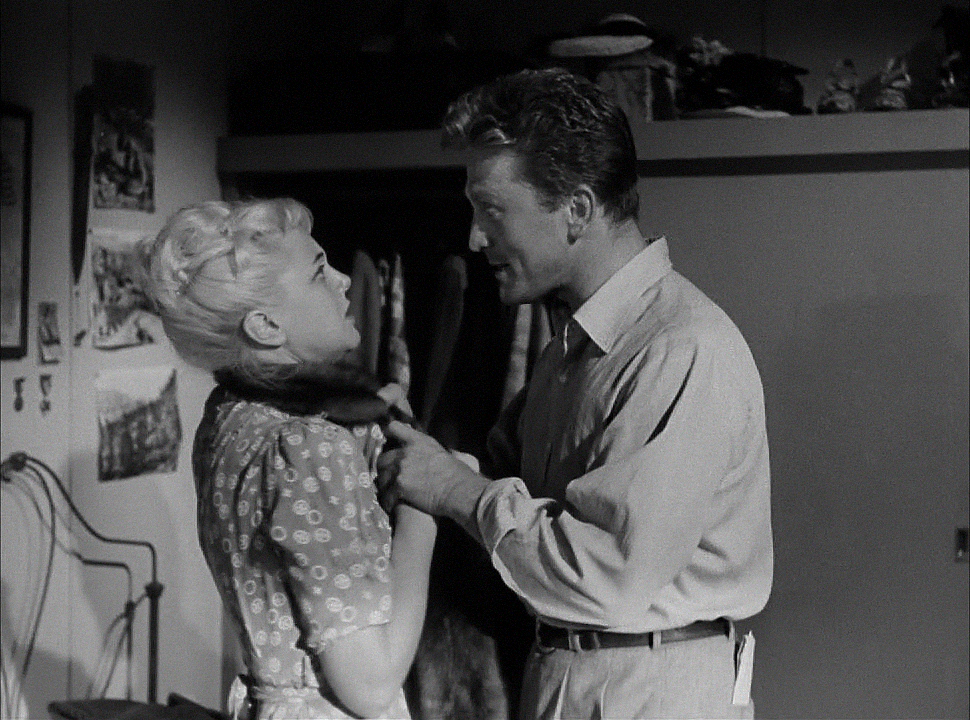 This was also the era of the production code, and Tatum’s total amorality means he must be punished in the end. Minosa dies before he can be extracted, and worse in the eyes of the bosses at the New York paper he just made take him back, Tatum announces the death to everyone without telling his own paper first, and he gets fired again. Oh, and he also gets stabbed by Lorraine with some scissors in (understandable) self-defense (as he tries to force her to wear a fur scarf Leo had bought her for the cameras). The final scene of the movie has him stumbling back into the Albuquerque newsroom, and finally dramatically collapsing, dead, with his face right in the camera in kind of one of my favorite shots I’ve seen in a while. The end.

I think a lot of your reaction to Ace in the Hole is going to be based on how you feel about the fact that there are basically no “good people” in the whole movie. Maybe Leo himself, and a couple of small roles like his doctor. But while the movie eventually delivers Tatum’s comeuppance, it also clearly views him with fascination. Douglas gives an all-timer of a performance, biting off many of his lines with ferocity while simultaneously believably integrating himself with various people when the situation calls for it. Meanwhile, of the hard-hearted dames of this era, Jan Sterling’s Lorraine is up there as the most hard-hearted. I am fairly certain she never cracks a smile at any point. She is also the one character in the movie who pegs Tatum immediately: “I met a lot of hard-boiled eggs in my life, but you, you’re twenty minutes.” The movie’s view of the general public, who descend on the cave seemingly just to gawk, is hardly any more charitable.

This was the first movie made by the great director Billy Wilder after “breaking up” with his long-time writing partner Charles Brackett, which whom he had collaborated on hits like The Lost Weekend and Sunset Boulevard. The story draws inspiration from a real-life incident from 1925 Kentucky, in which W. Floyd Collins was trapped in a cave after a landslide and it somehow turned into a huge media circus. A reporter from Louisville was credited with turning the story into what it was and won a Pulitzer Prize, but Collins did not survive. In fact, Collins is briefly namechecked in this movie, thought I doubt that would be much consolation to him. There was also a much-publicized incident in rural California in 1949 in which a three-year-old girl fell down a well and thousands of people gathered to watch the attempted rescues, which, given the timing, almost certainly served as inspiration for this movie as well.

At a time when it was decidedly not cool to take such a point of view, Ace in the Hole is full of vitriol for the entirety of America. The public are bad and stupid, the media is bad and has completely lost the point of its entire existence, law enforcement is corrupt, love is a lie, and bad behavior is, for the most part, rewarded. In 1951, there were plenty of reviews of this movie that seemed confused that anyone would think this about any of these institutions. Perhaps it says something larger about society that today this movie (still) feels entirely on point. Nothing about it (except maybe the concept of newspapers as a whole) feels dated in the slightest. The charitable view of this might be that we have come around to the idea that this sort of cynicism can have a productive impact on society. The less charitable view might be that we’ve just realized to a greater degree just how far gone everything is.