In my opinion, if the AFI does an updated Top 100 list at some point, the current film most likely fall to off the list is probably one of the newest, The Sixth Sense. That says almost nothing about the quality of the movie, which I do think is really good. But the fact that it made the Top 100 when the movies not on the list include The Exorcist, The Shining, every Universal monster movie… I could go on and on, well, it’s pretty ridiculous. The Sixth Sense is a good movie. But with a little bit of distance, it’s hard to justify putting it on a list like that. I’d much rather see, for example, Get Out, but that’s probably getting ahead of myself.

Now that that’s out of the way, I have good memories of this movie, I saw it multiple times in the theater, and I still like it. It is best known today for the line giving to its precocious central kid character, Cole (Haley Joel Osment): “I see dead people.” The other big thing it’s known for is its final twist, which works perfectly and absolutely is an all-timer. Lots of movies have aspired since The Sixth Sense to pull off final twists the way it does, but for the most part they don’t succeed. The crazy thing is how it all works just as well whether you know the final twist going in or not. It’s like a tightrope, where most of the people who walk on it fall off. Including the director of this movie himself, M. Night Shyamalan, more than once, after this movie became a massive hit.

Our main character is a heroic child psychologist (something I’m always looking out for in movies), played by Bruce Willis. He’s spent much of his career on action-y roles mixed with comedy, but is perhaps at his most dour and serious here. As far as I remember, he doesn’t punch anyone in the whole movie, which might make it unique, even in Willis’ other Shyamalan films. In the first sequence of the movie, a grown-up former patient of Willis’ (played by Donnie Wahlberg) breaks into his bedroom and shoots him because he “couldn’t help” him. Months later, Willis seems to have recovered, though his relationship with his wife (Olivia Williams, doing an American accent) is on the rocks. Then he gets a new patient, Cole, who reminds him of his prior patient who ended up shooting him. Willis thinks Cole has “acute anxiety” and a “possible mood disorder,” but that’s not the issue. 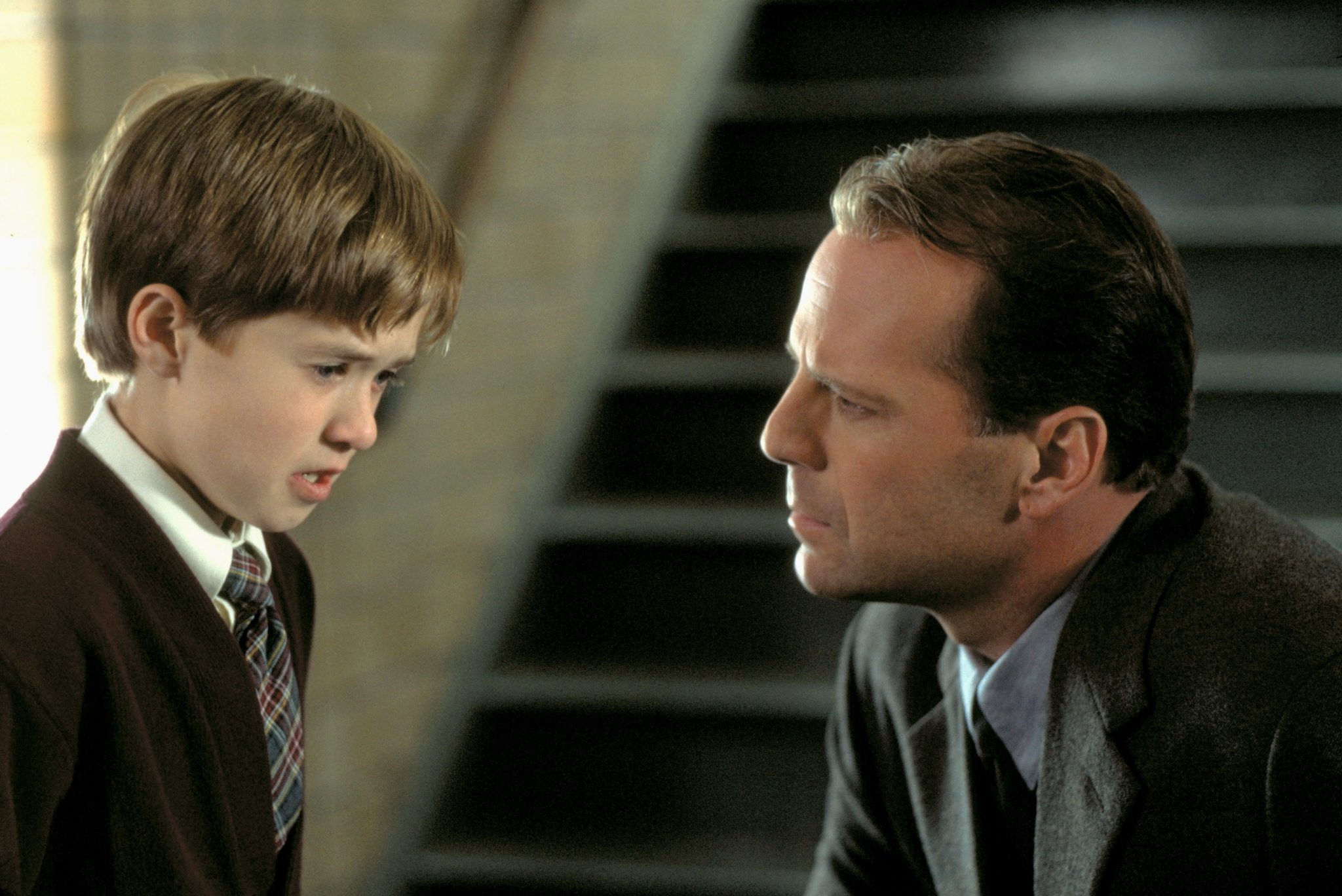 It’s actually surprising how long it takes the movie to get to Osment’s big scene, considering I’m pretty sure it was in the trailer. About halfway through, he gets to tell Willis “I see dead people… walking around like regular people.” The movie has fun for a few minutes with jump scares when random dead people walk across the screen. Then Willis figures out that Cole is telling the truth (because he hears ghosts when listening to old cassettes of meetings with his prior patient with the volume turned way up), and then tries to help him figure out what the ghosts want and help them.

The studios loved the script for this movie, but hesitated when Shyamalan, who had only directed two smaller indies before this, insisted on directing it himself. It made him a household name, for a few years second only to Spielberg in terms of name recognition with the general public, not to mention probably the most famous director of color up until that time. Shyamalan was born in India, but emigrated to Philadelphia, where many of his movies have been set, with his parents when he was six weeks old. Despite his fame, he found himself pigeon-holed after The Sixth Sense as, in his words, “the guy who directs scary movies with twists at the end.” He attempted to follow various versions of that formula in the couple decades since, with probably less misfires than his reputation might suggest. His career was considered on the skids (in 2013 he couldn’t find a studio to finance his found-footage horror film The Visit, so he paid for it himself), before its more recent revival starting with 2016’s Split. In Europe, his reputation remains probably better than in the US, because critics and audiences there actually seemed to like some of his weird middle-period movies like The Village and Lady in the Water.

But while the rest of his oeuvre is very hit or miss, Shyamalan hit all the right notes in The Sixth Sense, down to the casting of relative unknowns Osment and Toni Collette, an Australian actress who got her big American break from this movie playing Cole’s mom. There’s a scene near the end in a car where Cole tells her “Grandma says hi,” and it works way better than it has any right to because Collette is pitch perfect.

The thing to know going in about The Sixth Sense is that it’s only kind of a horror movie. It certainly has its moments where it tries to pull off jump scares, but it plays much more as somewhere between a character drama and a very low-key thriller. I watched this the day after watching Insidious with my wife, and I think in an objective sense that movie is way “scarier” than this. Honestly, few of the really great horror movies are “scary” in the same way that your normal haunted house movie is. They have other things on their mind.

Honestly, that might be where The Sixth Sense falls a bit short of some of its rivals, and to come back to the beginning why I think it’s likely to fall off the AFI list. It works on its own terms almost perfectly, but there isn’t anything extra here. I don’t think it really has anything in particular to say, or to take away from it. Part of the reason horror (and its cousins Sci-Fi and Fantasy) can be so wonderful is because it usually has layers, it uses things not of our world to say things about our world. The Sixth Sense is a very good movie, but that’s it, and that may be why I definitely think it falls just short of becoming a “classic.”