I had watched at least two different TV episodes directly parodying Stand and Deliver before I ever watched the movie itself, one of which featured Cartman from South Park teaching kids to cheat because it’s good enough for Bill Belichick. These days, it might be the stereotype of the classroom drama. But watching it, what I’m struck by is how far it pulls back from the usual movie drama. Edward James Olmos plays a real-life teacher, Jaime Escalante, who was usually on set during filming, and much of the script is his actual words. There’s no big scene where Escalante wins over the inner city students, rather, we tend to dip in and out of the process organically. There’s no scene where the cholo gangbanger played by Lou Diamond Phillips has a big change of heart and confronts the other members of his gang. As far as I can tell, he’s still in a gang at the end, he’s just good at math. And the final hurdle and climax of this movie, in which Escalante’s students are accused of cheating on the AP test, then take it again and pass, is overcome but not actually resolved. The movie never tells us if they cheated or not, because of course there was no resolution on that in real life, either.

Olmos plays a math teacher, Escalante, who decides to quit his cushy computing job to teach at a “barrio high school” in East Los Angeles. On his first day, some of the kids don’t speak any English and there aren’t enough desks, so a bunch of them have to stand in the back. The school is on the edge of academic probation. When Olmos suggests teaching more advanced math, he’s told that the kids will fail and he’ll destroy whatever self-confidence they have. So he makes them come in the summer and over winter break and before and after school and ends up getting the whole class to pass AP calculus and get college credit. He will do anything to do this. He imitates the way the kids talk. He whispers to Phillips’ character that he’ll break his neck by a twig if he doesn’t answer the question on the board. Another time (in front of the principal!) he tells a girl that she’ll “end up barefoot and pregnant.” He writes word problems with questions like “how many girlfriends does each gigolo have?” 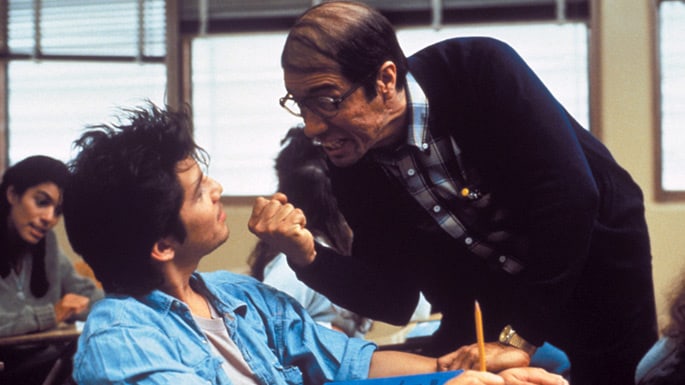 But mostly he works and works and works. His wife (Rosanna De Soto) accuses him of neglecting his family, and she’s probably right. He ends up having a heart attack while teaching night school. When a girl drops out to waitress at her parent’s restaurant, he shows up there to try to talk her dad in letting her come back. When young Andy Garcia, playing a rep of the testing company, accuses the class of cheating, Olmos shows up at his office to yell at them in person and say they’re racist. Even then, this movie prefers to tack away from obvious answers; Garcia seems to have no agenda, and is understandably offended at being called a racist. Everyone involved means well in their own way.

Olmos gained 40 pounds for the role, wore unattractive, thinning hair, and spent the entire shoot acting in front of the actual person he was playing, which has to be most actors’ nightmare. For his performance, he received the first ever Oscar nomination for a Mexican–American actor. This is a character who’s kind of a weirdo, but he finds a knack for one very specific thing. In one scene where his boss says “we’re all doing the best we can,” he raises his hand and says “I’m not, I could teach more.” OK, dude.

Stand and Deliver in my opinion sort of has an impossible task because, in the end, it’s about math class, which I hated with a fiery passion for my entire life. Even if you didn’t, this movie basically replaces the “final game” of a sports movie with a bunch of high schoolers sitting silently around a high school library taking math tests. The movie tries its very, very best, but it just can’t make that visually interesting or enthralling. Especially because its extremely clear how all this is going to turn out. 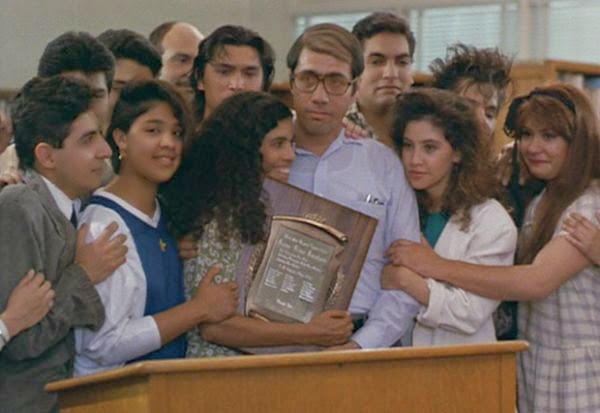 Where the movie excels for me is when it peeks into the lives of these kids. When it first breaks away from Olmos after about a half hour and starts following the kids around, it feels almost like a twist in a thriller. One girl’s mother comes home, so tired she can barely stand, and says the light from the lamp the girl is using to study is hurting her eyes, so the girl has to stop doing her math homework. Then we see the look on her face when Olmos calls her out in class, and we understand her way beyond what we would in most movies. Another girl tells her mom she wants to take extra math classes, and her mom responds that “boys don’t like it when girls are too smart.”

Stand and Deliver came out early in the modern “independent film” movement in America, and after Warner Bros. snatched it up at a film festival, likely became the first “indie” many people actually saw. One thing this movement helped bring about was the ability of filmmakers to tell stories other than those of rich or middle class white people on a more regular basis. If people are able to get financing and make their own movies, then there will be a lot more people out there who can “write what they know,” and thus many more different kinds of movies. Certainly, Stand and Deliver did not invent the drama about the inspirational teacher, but it put it in a new setting and took out a lot of the artifice that makes most of these movies, in my opinion, absolutely insufferable.

There was a book later written about the actual Escalante. Several of the former students let the author see their tests where they supposedly cheated, and he eventually concluded that they probably did, the first time around, not because they needed to but because of a crippling fear of failure, and that they all passed legitimately when they re-took the test. Jaime Escalante has become an icon in East Los Angeles, which even has a four story mural of Olmos with his arm around Escalante’s shoulder. One final note that I couldn’t help but raise: in 2012, Kentucky Senator Rand Paul was faced with accusations of “plagiarizing near-verbatim portions of the plot summary from the Wikipedia article on Stand and Deliver in two speeches on immigration.” Unlike Escalante’s students, Senator Paul, it appears, may have actually needed to cheat.