There is no other movie that, for me, evokes its own very specific feeling, that lives in its own created world from the first frame to the last, more than Blade Runner does. Its vision of a future world hemmed in by metal, hard rain, and steam, of a future that would be dirtier than the present rather than cleaner, of artificial intelligence with intense angst about its own lack of humanity, has been enormously influential ever since. It is also, in my opinion, probably the most successful “neo-noir,” even more so than Chinatown (for which being a modern day noir film was basically its entire reason for existence). Yet it failed to make much of a splash on its initial release, its studio always hated it, and at least seven different versions have been released since it initially came out in 1982.

Blade Runner is loosely based on a science fiction novel by Philip K. Dick called Do Androids Dream of Electric Sheep? It made him Hollywood’s favorite Sci-Fi novelist, and there have since been numerous films based on his other works, including Total Recall and Minority Report. The world of the movie is very close to that of the book, though the two stories are almost nothing alike. Dick did have the chance to see the movie just before he died, and expressed his admiration for it. Harrison Ford (fresh off of Raiders of the Lost Ark) plays Decker, a “blade runner” hired to “retire” (aka kill) a series of androids, called “Replicants.” He discovers that Replicant technology has advanced to the point where some, such as the pretty lady who greets him at the big corporate headquarters (Sean Young), have implanted memories and don’t realize they’re not human. Rutger Hauer and Darryl Hannah play the two most memorable Replicants, seeking a way to extend their designed four-year life span. Replicants are only allowed to work in space and on Mars, and are not allowed on Earth on pain of death. 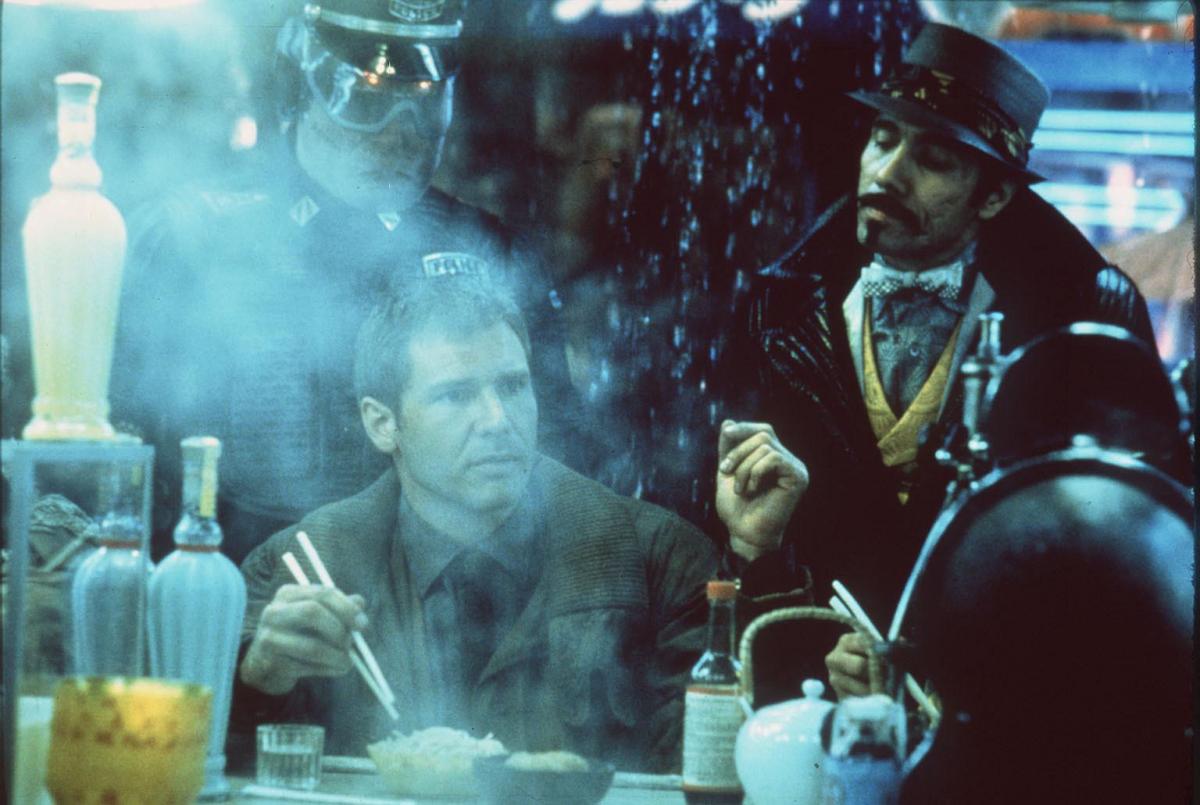 This relative shoe string of a plot gives director Ridley Scott an excuse to poke his camera into various corners of a world where the sun never seems to shine (except to cast shadows through the window blinds), where it always seems to rain, where neon in every language shines from every window, where banged-up flying cars take off and land with great jets of steam, pretty much all animals are extinct and robot versions are sold from shady street stalls, and everyone who can afford to has left for Mars. Underneath throbs the great electronic soundtrack by Vangelis. Thus is the Los Angeles of 2019, according to the opening title card.

The film is two hours long, but there isn’t nearly that much dialogue. Scott is content to linger on long shots of neon blimps drifting overhead and of Ford’s contemplative face as he rides in his flying car. Seeing the rough cut made Scott’s studio panic, and they called Ford back in to record some noirish voiceover to fill in some gaps, over Scott’s objections, and cut the movie down by several minutes. Many reviewers remained uncharitable, with the Los Angeles Times critic calling it “Blade Crawler” due to complaints about its slow pace. The current version you’re most likely to see today, called the “Final Cut,” was re-edited by Scott, with the voiceover completely edited out and a few scenes put back in. Most prominent is Decker’s dream about a unicorn, which Scott has said is supposed to be evidence that Decker himself is actually a Replicant. I’m not sure how anyone is supposed to get that without reading the liner notes, so to speak, but it works in context whether you “get it” or not.

What the film lacked in box office get up and go, it has made up for in the decades since. Today, no Sci-Fi fan’s DVD or digital library is complete without a copy of Blade Runner. In the years since, it has been one of the most frequently cited influences in science fiction film, television, anime, and video games, and it has been named the second most influential film of all time by the Visual Effects Society. It has been cited by various artists and filmmakers as the biggest inspiration for everything from Battlestar Galactica to Ghost in the Shell. It also would, eventually, spawn a sequel, Blade Runner 2049, directed by Denis Villeneuve, in which several members of the cast reprise their roles.

This was the second big blockbuster for Ridley Scott, from northeastern England, after Alien, which also takes place in a grimy future dominated by corporations. He is known for doing several takes of each shot, often while filming the same action with multiple cameras to save time. Since this film he has been nominated three times for Best Director, but never won, though his movie Gladiator did win Best Picture in 2000. His brother, Tony, was also a major director before committing suicide by jumping off a bridge in Los Angeles in 2012. The brothers went in together on their production company, Scott Free (which, as my wife points out, is a misnomer, given that all of the films it produces involve Scotts). Within the past month Scott debuted his first TV series, also science fiction, called Raised by Wolves, which continues to explore the theme of artificial intelligence with a mind of its own, so to speak, a theme that has come up in many of his films.

I would be remiss if I didn’t spend more time discussing Rutger Hauer, who plays the replicant Roy Batty somewhere between cult leader and hyena. Hauer was well known at the time in his native Netherlands but this was only his third English language role, and the first where he wasn’t playing a terrorist or a nazi (still the villain but… baby steps?). The best thing in the movie (maybe any movie?) is Batty’s dying monologue, which has its own Wikipedia page:

I’ve seen things you people wouldn’t believe. Attack ships on fire off the shoulder of Orion. I watched C-beams glitter in the dark near the Tannhäuser Gate. All those moments will be lost in time, like tears in rain. Time to die.

That’s the stuff, right there. Also in this movie is Edward James Olmos, mostly not speaking English. I had always assumed that he was supposed to be speaking Japanese (it kind of sounds like Japanese), which seemed weird because he’s, you know, not Asian. I learned on this go round that he’s actually speaking a made-up language called “CitySpeak” that he created himself from “diverse ethnic sources.” Even when much younger, he still looked 75. Olmos went on six years later to become the first American-born Hispanic actor to be nominated for an Oscar, for Stand and Deliver. 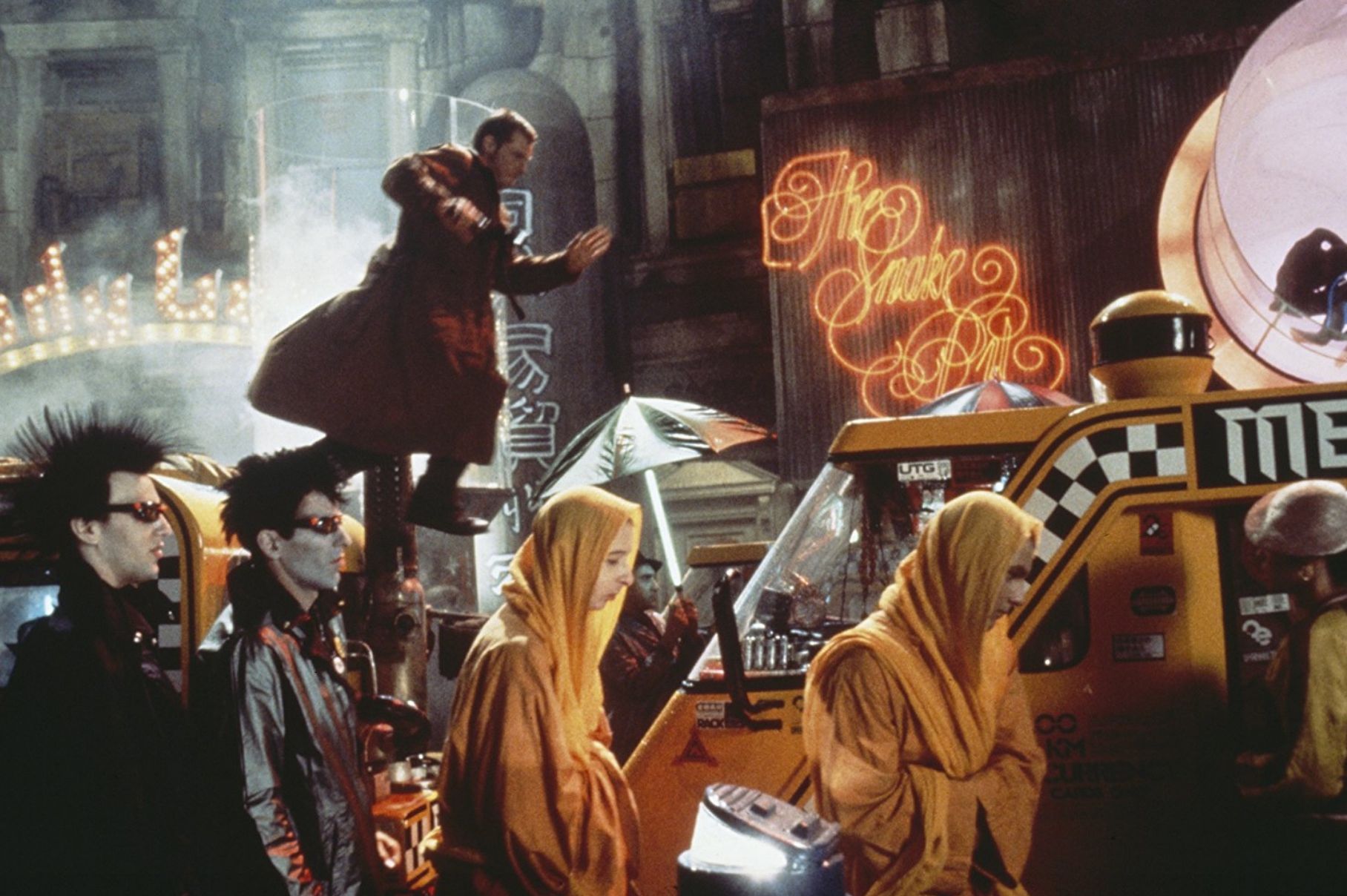 One of Olmos’ only lines in English is “It’s a shame she won’t live, but then again, who does?” He’s talking about the reduced lifespan of Young’s Replicant character, who Decker has, of course, fallen for. But the movie plays the line again right at the end, in a situation that doesn’t totally make sense in terms of linear thinking. I think that’s the other thing I like the most about Blade Runner, other than the pervasive atmosphere and electronic thrum. There are moments that don’t totally make sense, but at the same time it doesn’t feel like a puzzle to be solved. It makes emotional sense, not necessarily logical sense. That’s not something everyone’s looking for in a Sci-Fi movie, which might be why Blade Runner took a while to connect with people.