Halloween did not invent the slasher sub-genre, coming a few years after The Texas Chain Saw Massacre and Black Christmas. However, it likely served to popularize and codify the tropes of a very specific version of the slasher movie, one that has since been picked over by film critics and academics without end. It features a motivation-less, force-of-nature killer in Michael Myers, killing his way through a series of teenagers, usually immediately after they’ve committed transgressions related to sex and drugs, until he runs into a chaste “Final Girl” (Jamie Lee Curtis), who finally defeats him. In the years that followed, slasher flicks received criticism for the way that any girl who has sex immediately gets killed, and because they sometimes seemed to be serving little more than a prurient interest of men who wanted to see women being brutally massacred. However, John Carpenter, the director of Halloween, has said that he was just trying to realistically portray teenagers they way they actually were, not comment on their morality. And, of every slasher film I’ve seen, the original Halloween is almost certainly the least violent, though its use of “point of view” camera work clearly wants us to identify more with the killer than his victims.

Carpenter had originally intended Halloween to be the first in an anthology series, with different stories all set on the titular holiday. However, the studio quickly put the kibosh on that. It has since spawned no less than eleven sequels, five of which involved Curtis to some degree and only one of which involved Carpenter (Halloween H20). A few of these have been well-received, while others (like Halloween III: Season of the Witch) are considered to be among the worst “major” movies ever made. All of which seems to have come from a producer’s suggestion that Carpenter follow up Assault on Precinct 13 with a movie about a killer going after babysitters, along with Bob Clark, director of Black Christmas, telling Carpenter that he had an idea for a sequel that he didn’t intend to make himself, about the killer from the first movie escaping from a mental asylum and killing people on Halloween. 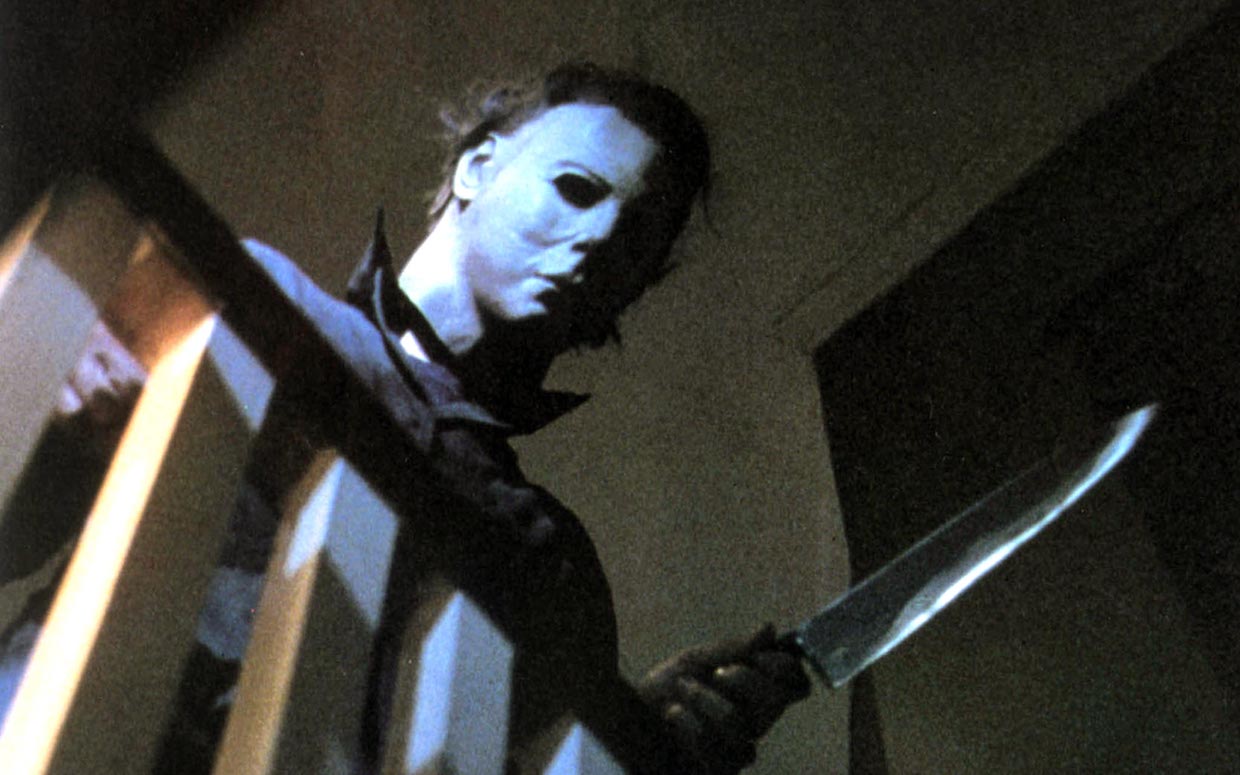 For the unfamiliar, the plot of the movie is very straightforward, though it still feels slow-moving from a modern perspective. The movie opens with an extended single shot from the point of view of a young child, Michael Myers, as he murders his older sister (it’s heavily implied that she’s just had sex with her boyfriend). Cut to years later, and he’s grown up in a mental institution, but escapes after hijacking the car of a doctor who’s been studying him (Donald Pleasance). Michael returns to his hometown on Halloween and stalks several babysitters, the shy good girl Laurie (Curtis) and her two, more promiscuous and out-going friends (Cindy Loomis and P.J. Strode), along with at least one of their boyfriends. Surprisingly, there are no more murders until more than halfway through the movie. After Michael murders her friends, we follow Laurie as she desperately tries to escape this killer. Among other things she stabs him with his own knife, a knitting needle, and a wire hanger, but he keeps getting back up until the doctor randomly shows up and shoots him.

What this description does not tell you is how Carpenter expands the visual language of the modern thriller in this movie. Numerous shots slowly pull back from our characters, eventually showing Michael watching them. He repeatedly uses this technique of suddenly showing something in the foreground to put a new twist on what we were already seeing in the background. Carpenter also composed the movie’s score and theme, which you have definitely heard even if you have not seen this movie, heavily influenced by the scores of Suspiria and The Exorcist. I associate slasher movies with elaborate and bloody murders, but there’s almost no blood in this movie (except near the end to show us how beat up Laurie is by her battle). A couple girls get stabbed (in a way that we hear more than see), another gets strangled to death. One of their boyfriends does get stabbed in such a way that he ends up held up impaled against a wall by the knife. But that’s kind of it. All of the nudity is only implied. This is all a far cry from the first slasher movie I think I ever saw, which I think was one of the earlier Friday the 13th sequels at some sort of party during my impressionable youth. I could tell you numerous things that happened in that movie, though I’m still not 100% sure what movie it actually was. I can tell you there was both a lot more sexy stuff and a lot more gore in that than there is here. 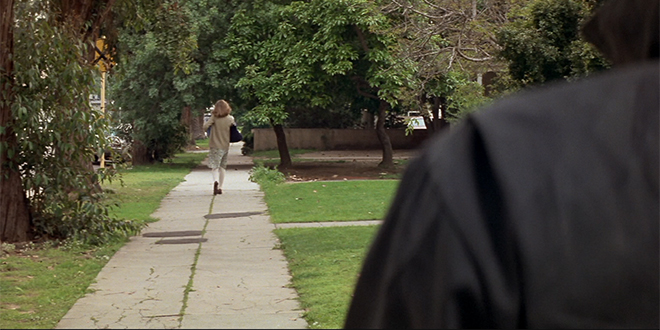 Curtis was only 20-years-old at the time she made her screen debut in this movie. That she was the daughter of Hollywood stars Tony Curtis and Janet Leigh makes her big break seem like a case of nepotism, though Carpenter has said that he did not know who she was at the time of her casting. However, when he did find out, he thought it would be good publicity for a horror movie to have the daughter of the female lead of Psycho. Despite her young age, she looks about 35 here already. She looks beautiful, don’t get me wrong, but she doesn’t look like the teenager she was (neither, for that matter, do the other actors playing high schoolers, who all look over 30 to me). Curtis immediately brings more humanity and believability to her performance than I think I’ve ever seen in a slasher movie before. It makes perfect sense that she became a star based off of this performance and has gone on to a long career.

Halloween does not make a particular amount of sense if you think about it, which is another thing that went on to be the case for most movies in this genre until, at least, Scream. Despite the numerous and vociferous warnings of Donald Pleasance (an English actor in one of his two big American roles, the other being the original Blofeld in You Only Live Twice), the police don’t even put out an APB for this guy. Meanwhile, he murders his way through numerous babysitting teenagers who seem to exist in the same, parentless world inhabited by the teenagers of American Graffiti. Not just their parents, but the parents of the kids they’re babysitting. We see one pair from a distance far away one time, none of them ever check on their kids or are informed by the police that an escaped murderer is probably on the street.

But Carpenter is not interested in plot niceties. Rather, he’s much more concerned with the idea that, as one of the kids being babysat intones, “you can’t kill the boogeyman.” Evil is immortal. When the doctor shoots Michael and he falls out the window, the doctor later looks out to see that his body has now disappeared. This wasn’t Carpenter gunning for a sequel, it was a comment on the themes of the movie. As for the slasher genre, it appears to also be immortal. Two more Halloween movies are currently planned for the Octobers of 2021 and 2022.