Watching the original Black Christmas (it’s been remade not once, but twice) today, it may seem like a bit of a slasher mishmash. It may be helpful to remember that it predates those movies that we’re remembering. If anything it’s remarkable for how fully-formed of a slasher movie it is. There’s a “Final Girl” and everything, though this one has an unexplained English accent. Where this movie differs is that, while the killer becomes the star of most later slasher movies, Black Christmas keeps open the possibility that he might be one of the characters we already know throughout. In the end, Black Christmas never fully shows its killer on screen. Honestly, I found that much more interesting, and maybe even “scarier” than the implacable, indestructible serial killers of the Halloween and Friday the XIII movies.

The initial idea for Black Christmas was supposedly (very loosely) inspired by a series of murders that occurred in a Montreal suburb during the holiday season of 1943. It was a Canadian production by director Bob Clark, who had the script re-written to move the story to a university campus and shot the movie on location (and on the cheap) on the campus of the University of Toronto. The story follows the residents of a sorority house as they deal with one of their sisters (Lynne Griffin) suddenly disappearing and a series of obscene and bizarre phone calls. Clark does a remarkably good job of drawing the handful of sorority characters in a relatively short amount of time. Perhaps surprisingly, there’s barely any gore. All of the murders are cut away from very quickly, with the exception of one that’s shot so obliquely that it suddenly feels like we’re in a very European art movie. 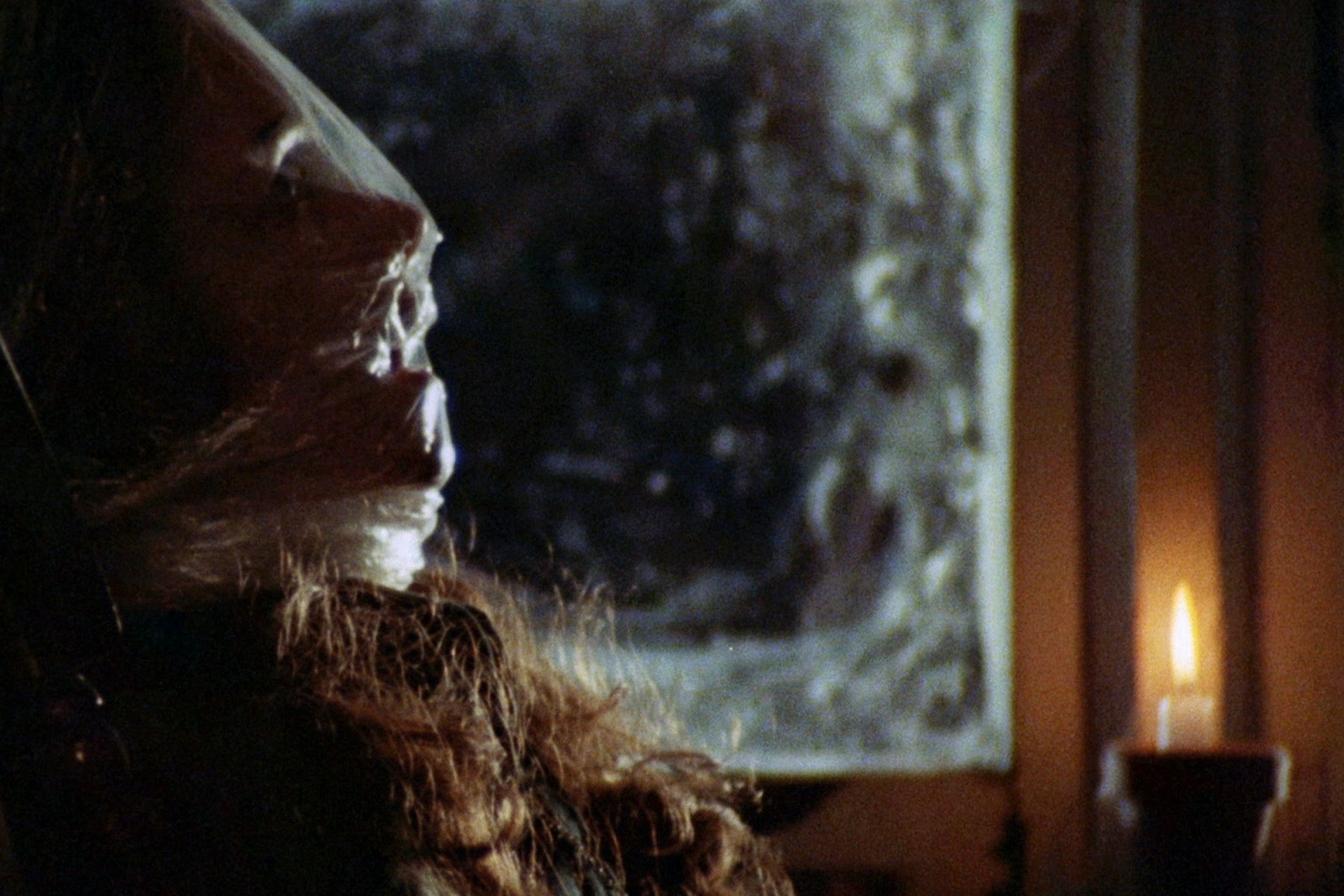 This movie does not succumb to the temptation to make its killings somehow Christmas-themed (no one gets strangled by a wreath), but does take advantage of its vaguely oppressive setting of Canada in the middle of winter. There is no doubt that everyone here will have a white Christmas, and a scene involving a search for one missing girl (her corpse is eventually discovered, but again, never actually shown) features cops driving snowmobiles and wearing balaclavas. And, as directors of many movies have discovered over the years, there is something to be said for the texture added by setting a movie at Christmas, with decorations everywhere, even if that movie has nothing in particular to do with the holiday. In the end, the American distributors changed the title to the unintentionally hilarious Silent Night, Evil Night for the movie’s initial US run, under the theory that Americans might be fooled into thinking that the movie was about Black people (the horror). In fact, it was about Canadians, almost as bad, and after that initial theatrical release the movie has always gone by its original title.

Clark himself had grown up in America, but spent most of his career making movies in the much smaller Canadian film industry, where he could be, to use the cliché, a big fish in a small pond, and make the movies he wanted with far less interference, as long as he could make them on a shoestring. That’s something he did consistently, securing Canadian financing for a series of movies that were also successful in the US. Black Christmas is semi-explicitly Canadian (at least if you know place names), but in later films pioneered the common modern practice of films and tv shows being explicitly set in America but clearly shot in Canada for tax reasons, especially in Porky’s, which was set in Florida and became far and away the highest-grossing Canadian movie at the American box office at the time (it also pretty much invented the “teen sex comedy” that became so prevalent for a while). Another movie from Clark’s widely varying oeuvre is A Christmas Story, which maybe we’ll get to in next year’s Holiday Virtual Film Festival.

For this movie, Clark assembled a great cast of very good actors who today are mostly known for other roles. The “final girl,” Jess, is played by Olivia Hussey, who first gained renown for playing Juliet in the wildly popular 1968 version of Romeo & Juliet. She was born in Argentina, but moved to London with her family when she was a kid. The movie just has her use her own accent as a college student in Canada without any explanation, which is fine, though if you didn’t know going in that Hussey was actually English (which most people would have at the time) it might be distracting. Hussey’s career never quite lived up to its early potential, maybe because she had a reputation as a bit of a flower child space cadet, as well as an ongoing struggle with agoraphobia. She reportedly took the central role in Black Christmas because her psychic told her she would “star in a movie in Canada that would make a lot of money.”

Keir Dullea plays Jess’ pianist boyfriend. If you’re anything like me, it’s very likely you know Dullea exclusively from his central role in 2001: A Space Odyssey. Margot Kidder plays Barb, the wildest of the sisters, who spends most of the movie in various states of drunkenness before getting what’s probably the best death scene. She steals every scene that she’s in, showing here that she deserved to be a much bigger star than she was at the time. That would not be the case for long, as Kidder would of course be cast as Lois Lane and star in several Superman movies opposite Christopher Reeve. Today I learned that Kidder is maybe the only person I ever heard of from Yellowknife, the capital of the Northwest Territories. Her Barb gives the sorority house phone number to a police officer as “Fellatio 20880,” explaining “it’s a new exchange,” blithely feeds booze to the “unfortunate children” at the sorority’s charity Christmas party, and later laments, after screaming at a stranger in her room, that “I should be so lucky, to have a strange man in my room.” A young Andrea Martin appears as one of the other sorority sisters, pre-SCTV. She would be the only cast member to return for either of the remakes, playing the sorority House Mother in the 2006 version.

At the time of its release, Black Christmas’ reviews were mixed at best. I’ve found that a lot of these early slasher reviews are entirely unwilling to meet the movie on its own ground (I recall reading Roger Ebert’s zero-star take on Last House on the Left, which he basically said was completely worthless and actively hurting society). But I think a horror movie on its own terms can be just as great as a superhero movie or a western on their own terms. Gene Siskel said Black Christmas was “only notable for indicating the kind of junk roles that talented actresses are forced to play,” and The New York Times stated that it “raises the question of why it was made.” I actually really liked it, moreso than a lot of the movies that it directly inspired. It has us a lot more interested in its characters than almost any other slasher movie (very few of the other genre entrants have nearly as many jokes that actually land, for instance), and it has this element of suspense that most of these movies don’t have because we don’t actually know who the killer is. The phone calls we hear are completely inexplicable, and sound really frightening and nuts.

My point of view has become more prevalent over the years, and these days Black Christmas is a common entrant on lists of the best horror movies ever made. Olivia Hussey has described meeting Steve Martin for the first time and him telling her she starred in one of his favorite movies. She assumed he was talking about Romeo & Juliet and only much later in the conversation did she realize she meant Black Christmas, which he told her had watched 27 times. It’s just so effective at what it’s trying to do, it seems to me impossible to deny. These days, Halloween is often credited with being the original slasher movie, and it likely did do more than any other film to codify the usual tropes of that genre, but Halloween wouldn’t exist in anything like its current form if it had not been for Black Christmas. With everything from its very effective use of point-of-view camera work (in this case, literally a camera strapped to a hat worn by the cameraman) to its climactic revelation that THE CALLS ARE COMING FROM INSIDE THE HOUSE, Black Christmas feels like it’s building the toys that later movies would later take out of the box and play with.