Night of the Living Dead was a tiny, independent movie made by a bunch of people from Pittsburgh who put up their own money in an attempt to break into the movie business. It ended up essentially the inventing an entire genre of modern movies, that of the zombie apocalypse, or really the apocalypse in general, out of whole cloth. All of the rules that you know about zombies, such as that are the dead rising en masse to eat the flesh of the living, or that the only way to kill them is to destroy the brain, were essentially invented by George Romero and his collaborators while writing the script over three days. Night of the Living Dead had a shooting budget of $114,000, which the producers stretched to the limit (the vast majority of the movie, for example, is set in one house that the owner let them use for cheap because it was slated to be torn down anyway). Since its release, the movie has made approximately $12 million in the US and $18 million internationally. That means, with some quick math, that the movie has made back over 250 times its budget since its release. It has since spawned at least four official sequels and at least two official remakes (the edges tend to blur), which is not to mention its innumerable direct influences, from The Walking Dead to Shaun of the Dead.

Yet it’s very possible that none of this would have happened if Night of the Living Dead hadn’t had something to say. Romero later said that he was inspired by Richard Matheson’s novel I Am Legend (which has been made into at least three movies in its own right), about the last man on earth after a plague of vampires. Romero thought that it would more interesting to start at the beginning of the end of the world, and so wrote a movie about the initial breakdown of society. What he may not have known consciously was that in the process he was tapping into one of the most deep-seated fears of the modern world, or maybe one of its most potent metaphors, or both. Then he cast Duane Jones, a Black actor, in his lead role of Ben. Romero has always claimed that he never intended the character to be a specific race, and that Jones just gave the best audition. Romero then made a movie in which (spoilers) all the lead characters die at the end, except for Ben, who is then shot mistakenly by the cops (or perhaps more accurately, a posse of rednecks given guns by the sheriff) and tossed on a bonfire with all the other zombie corpses. Then Martin Luther King was assassinated in the time between when they finished making the movie and when it came out.

The movie starts with Barbara (Judith O’Dea) and her brother Johnny (who tries to scare her with the famous ironic line, “They’re coming to get you, Barbara!”), visiting a cemetery in rural Pennsylvania to put flowers on their grandfather’s grave. We see, in the distance behind them, a single man staggering towards them. Within a minute or so, Johnny’s dead and Barbara’s desperately trying to get away. She ends up at an isolated farmhouse, where she is about to be eaten by more “ghouls” when Ben shows up with a pickup truck. There’s a gruesome dead body at the top of the stairs. After about a half an hour, several other people come busting out of the basement, though they don’t live there, either. Everyone huddles around the radio and the TV, which are filled with desperate special reports about exploding satellites from Venus (though the movie never 100% makes clear what actually happened). There are passionate arguments about whether to make a break for it, or hide in the basement. Then, in the last twenty minutes or so of the movie, the zombies get in and all hell breaks loose. Infamously, the 11-year-old girl in the basement wakes up and eats her own mother. Really it’s the scenes at the start and end of the movie that basically all other later zombie movies come from.

Of course, Romero did not use the word “zombie,” and didn’t think of this as a “zombie” movie. The term had been around for a long time, obviously, but it had previously been used in connection with Haitian voodoo practices. There had, in fact, been many previous horror movies about the Haitian type of zombie, perhaps most famously White Zombie, starring Bela Lugosi. But in those movies, the zombies were the victims. Since Night of the Living Dead, they have come to represent all of society’s modern ills, from capitalism to pandemic to war. This movie does not use the term (the script referred to the monsters as “ghouls”), but its fans did, and the 1978 sequel Dawn of the Dead deploys the term without prejudice.

Night of the Living Dead is shot on 35 mm black and white film stock, a choice made supposedly solely due to cost. In effect, this makes the film seem almost like a documentary (one reviewer called the effect “chiaroscuro,” which I mostly quote because it’s a fun word to say). It was, in fact, the same film that viewers of the 1968 nightly news would have been watching pictures come back from Vietnam on. And there is certainly an argument to be made that the movie is, to no small extent, about Vietnam, or at least the American view of it. It is about the sudden intrusion of graphic violence into the American living room. Even today, its gore still retains the power to shock. Not from the black globs of blood, but from the close-ups of dead people chomping on intestines and pulling away flesh from the bone. If there’s a better short-hand for the total breakdown of society, I don’t know anything better than that. 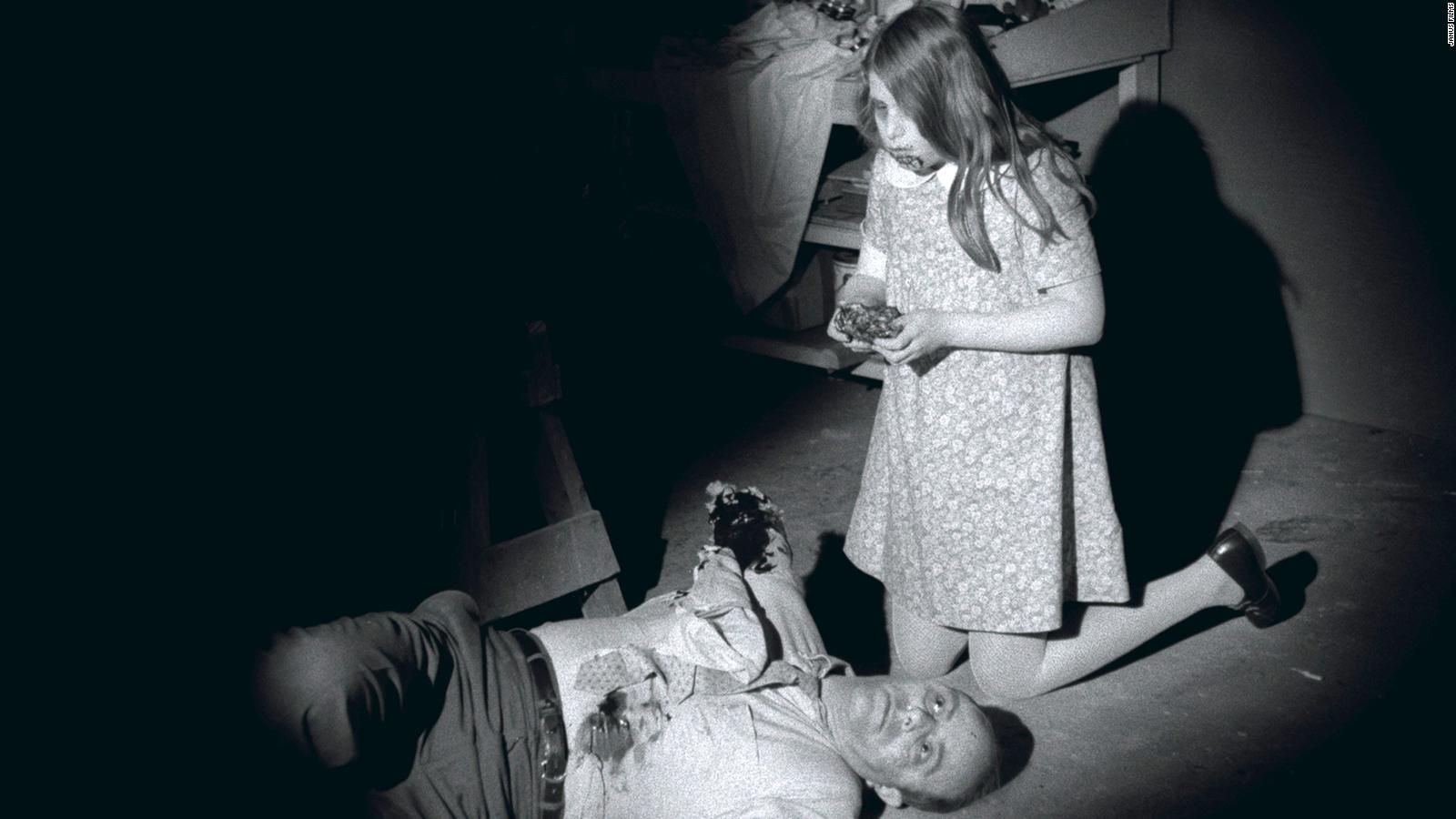 Though Romero went on to a long career as a legendary horror director, most of the other participants in the movie lead relatively quiet lives. Duane Jones had studied at the Sorbonne and taught as a literature professor at Long Island University before turning to acting and immediately getting this job. Romero allowed him to rewrite his dialogue to change the character of Ben from a “simple truck driver” to a much more educated person who just happened to be Black. Judith O’Dea, as Barbara, has the unenviable task of playing a lady who becomes pretty much useless after the movie’s first scene. Even after Ben punches her in an attempt to get her snap out of it, it doesn’t work (that scene must have been shocking on its own to 1968 audiences). She had been a few commercials in Pittsburgh, and didn’t return to acting after this for several decades. Most of the other actors were producers on the movie, or family members of the producers. Yet it all works really well.

So well, in fact, that reviewers at the time weren’t sure what to do with it. Roger Ebert praised it while simultaneously begging parents not to let their children see it, in an era before ratings when a lot of parents probably thought that “horror movies” involved plastic skeletons jumping out of closets, not intestines getting ripped out. Even the normally stolid New York Times gave it a positive write-up. But Variety (according to legend, pissed off that they weren’t given an advanced screening by the indie distributors the way a Hollywood studio would have) called it an “unrelieved orgy of sadism” and vaguely called for the U.S. Supreme Court to “establish clear-cut guidelines on the pornography of violence.” It did not.

I could have sworn I’d seen this movie before, and I’ve certainly watched the opening sequence at the cemetery before, but most of the movie felt very fresh to me to the point that I doubt I’ve actually watched it all the way through before. I loved it. Somehow, it turns all its limitations into strengths. Its one set feels appropriately claustrophobic. Its cheap film stock gives a greater sense of immediacy than it otherwise would have had. They couldn’t afford to hire actors to play TV reporters, so they got actual local Pittsburgh local TV people to do it, which resulted in the TV reports feeling much more realistic than they otherwise might have. The amateur actors feel down-to-earth rather than wooden. And so on. If you’re fan of horror movies and haven’t yet had the chance to check out the original Night of the Living Dead, I would definitely recommend it.