While writing about Apocalypse Now, I said that I used to think of the movie as one of my favorites, and that I no longer felt that way, but I still advocated for it as a “great film.” In the case of Dr. Strangelove, I always thought of it as a great movie, but seeing it now, I think I’m just realizing it’s one of my favorites, too. It is about an intense concern of its era, but somehow absolutely none of it feels dated or off point today. And no, I swear I wasn’t trying to make some statement doing a movie about a nuclear exchange starting after a guy with the nuclear codes begins believing in crazy conspiracy theories and various safeguards in place suddenly prove entirely ineffective. But yeah, I thought about that a lot while watching this, that is for damn sure. Which, when you consider that this movie is from 1964, and not only still thought provoking but also hilarious, is a great achievement in and of itself.

With the full title of Dr. Strangelove or: How I Learned to Stop Worrying and Love the Bomb, this movie is both a comedy and its director, Stanley Kubrick’s grand statement about a subject he was obsessed with at the time, nuclear war. He had bookshelves full of books at his home on the subject (honestly, had I been around at the time, I probably would have been obsessed with it, too). Yet he addressed the subject by taking a serious thriller novel (which had no character in it named Dr. Strangelove), Red Alert by Peter George, and turning it into a bizarro black comedy, in which Peter Sellers plays three different roles, and which ends with the famous scene of Slim Pickens wearing a cowboy hat, riding a nuclear bomb down to its target with a triumphant rodeo yell. He didn’t come up with his ideas, but I find it hard to believe that anyone could seriously argue post-Dr. Strangelove that nuclear war in any form could ever be a good idea. That so many “serious” people still did is one of the sadder comments on our species I’m aware of.

Kubrick even gives all of his characters transparently silly names, which is part of the comedy I can get behind. The story starts when General Jack D. Ripper (Sterling Hayden) orders his air wing at “Burpelson Air Force Base” to bomb the Russians. They can only be recalled with a certain code, there is no other way to contact them because of the standard lockdown procedure to prevent Russian interference. Most of the movie is on three sets: in Ripper’s office, where RAF “Exchange Officer” Mandrake (Sellers) gradually realizes just how far gone Ripper is, and that there is no nuclear war going on until Ripper starts it, in “The War Room,” an enormous circular table surrounding by large light-up maps, at which President Merkin Muffley (also Sellers) desperately tries to solve this problem with the “assistance” of Gen. Buck Turgidson (a completely over-the-top George C. Scott), the Russian Ambassador (Peter Bull), and his weirdo ex-Nazi scientific advisor, Dr. Strangelove (also also Sellers), and a B-52 bomber captained by Slim Pickens’ super-stereotyped Texan Major “King” Kong. His crew also includes a young James Earl Jones, in his first film role. Even after the recall code is discovered and all the rest of the bombers called back, Kong and his crew soldier on with their damaged radio below Russian radar, the heroes of any other movie, before dropping their bomb and setting off the Russian “Doomsday Machine” that destroys the world.

Kubrick may have been a visionary, but he also never seemed willing to treat his actors as humans. Just as he drove Shelley Duvall to actual hysterics to capture her on-camera hysterics in The Shining, he spent the shoot for Dr. Strangelove tricking and cajoling his actors to achieve the exact performances he envisioned. After Sellers (originally set to portray the Bomber pilot as well) dropped out after hurting himself, longtime Western character actor Pickens was hired to replace him. Pickens had to get his passport first, having never been outside the US before (the movie was shot at Shepparton Studios in London) and then showed up to set, the filmmakers assumed, “already in character.” What they didn’t realize, but Kubrick did, was that was how Pickens dressed all the time, ten gallon hat and all. This is him playing the role completely straight. Kubrick purposely kept the other parts of the script from Pickens, so he wouldn’t realize that the movie was a comedy. Meanwhile, Kubrick elicited Scott’s insane performance as a warmongering, hyperactive general by telling him to start off going way over the top, as a “warm up exercise,” before actually shooting the scenes. What Scott did not realize that Kubrick actually planned to use the warm ups in the final movie. So Kubrick got him to try completely silly things he never would have otherwise, like in the scene where Turgidson gets so excited about “the Big Board” that he trips, does a somersault, and gets up to point at the Board in one motion. 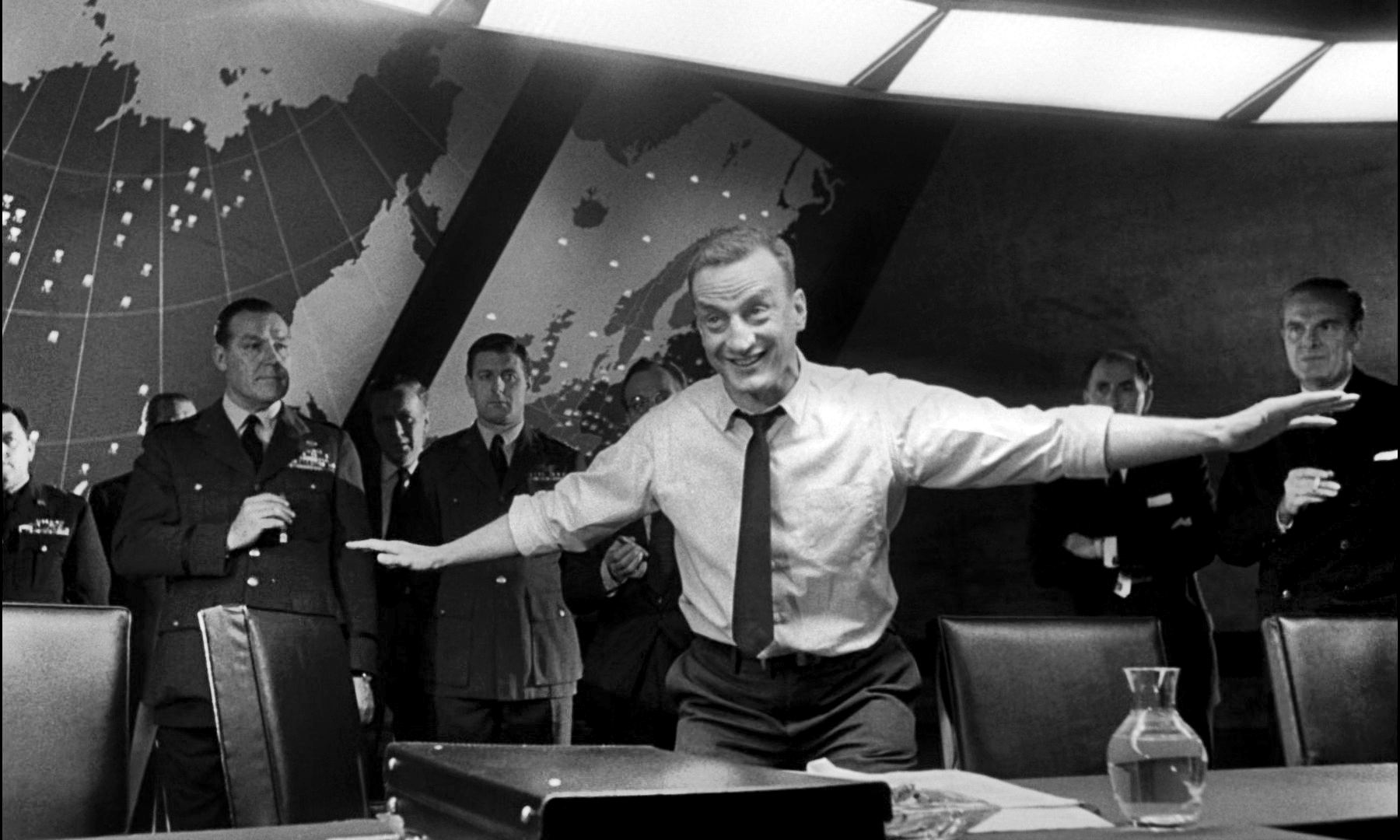 These performances are one major component of why this movie reaches the level of greatness that it does. Another is how clearly it sees its subjects. It understands that Mutually Assured Destruction is madness, and anyone who would argue otherwise is crazy in their own right. It understands that otherwise “respectable” people, like General Ripper, can go pretty far down the rabbit hole of insanity before anyone notices anything is amiss. It understands that some people, once you give them a weapon, aren’t going to be happy until they’ve used that weapon, no matter how insane that sounds. They understand that for many people who are literally in charge it is easy to become inured to big numbers, no matter what they represent, as when Turgidson argues that if the President follows his advice there will be “only” ten or twenty million civilian deaths. These are the people that invented the term “megadeath,” long before it was the name of a band, to serve as a handy unit of numbers of deaths.

At the time of Dr. Strangelove’s release, some reviewers called it the great satire of its age, but others, like Bosley Crowther of the New York Times, had a major problem with the movie’s essential nature: a black comedy about the end of the world. Surely, this was too serious to joke about? But the key thing that Kubrick understood is that Nuclear War is so deranged that comedy is the only way to actually show it for what it is. Where Crowther objected to Kubrick showing the US Military’s entire top brass to be “psychopaths,” Kubrick realized at a time when many others didn’t that anyone who would argue in favor of Nuclear War was, by definition, insane, that it is all mixed up with showing their own sexual dominance and the legacy of World War II and a bunch of other things. Kubrick could never have anticipated the rise of QAnon, but General Ripper’s conspiracy theories about water fluoridation destroying his own “precious bodily fluids” are, if anything, more believable. It’s no coincidence that Ripper first “comes to this realization during the act of love,” then goes to talk about “denying women my essence,” nor is it a coincidence that this movie starts with a sequence showing mid-air bomber refueling that is difficult to read as anything other than an overt sexual metaphor.

So nuclear holocaust may, rightly or wrongly, no longer be at quite the same level in the zeitgeist as it once was, but Dr. Strangelove continues to feel alive. I would rate it as probably the best and most important satire ever made, and I could write for ten more pages about it, but I’ll spare you that. I haven’t even really talked about Sellers’ performance as Strangelove himself, or the way the fictional War Room became such a part of the way America thought about itself that it became common for dignitaries with the right clearance to ask to see it, at which point they had to be told that it wasn’t actually a real thing. I’ll just say that if you haven’t seen it yet in your life, you definitely should.

6 thoughts on “DR. STRANGELOVE OR: HOW I LEARNED TO STOP WORRYING AND LOVE THE BOMB (1964)”