I get the impression that Dances With Wolves is one of those winners of the Best Picture Oscar whose star has declined over time. I think I like the idea of it more than I like the actual movie. There are plenty of criticisms you can make of it. The original three hour theatrical version feels too long, and with the exception of a couple of scenes plays as more elegiac than exciting. The movie would later be re-released in a completely inexplicable four hour version which you should not watch. It has the black hole of charisma that takes over some Kevin Costner performances right at its center. No actor has made narration from their character’s diary sound quite this boring and stilted. Most egregiously, much of America, and the world, likely still thinks of this as the movie telling the story of Native Americans, yet it’s told by a white guy who made himself the star and depicts at least a version of a White Savior narrative, a trope that has gathered derision in the years since.

Because there are not enough movies from the point of view of marginalized groups like Native Americans, those movies that there are tend to be the subject of a lot of scrutiny about their specifics. Witness the recent controversies regarding the alleged “colorism” of In the Heights, for which Lin Manuel Miranda publicly apologized. Long stretches of the dialogue in Dances With Wolves are in the Lakota language, which today only has around 2,000 native speakers. The dialogue was translated from English to Lakota by a professor and learned phonetically by the cast, most of whom were Native American but came from many different tribes. Interestingly, I’m told that if you actually speak Lakota watching the movie is a very weird experience, because nobody pronounces anything correctly and much of it is straight up wrong. The problem, apparently, is that Lakota actually has two different “modes,” one used by men and one used by women, but everyone in the movie, including Kevin Costner, uses the “female version” of Lakota.

But if you look at Dances With Wolves outside of those specifics, I think it works better as a sort of universal story about the clash of civilizations. Kevin Costner plays a Civil War soldier, John Dunbar, on the Northern side who, after unwittingly engaging in heroism, requests a transfer to the farthest edges of the Frontier, “in order to see it before it’s gone.” He finds himself at an outpost alone, but ends up befriending and gradually integrating into the culture of a nearby tribe of Lakota Sioux. He also romances, and eventually marries, a white woman, Stands With a Fist, captured by the tribe as a child. She is played by Mary McDonnell, President Roslin herself, who does a very good job acting as someone who doesn’t really speak English, even though she obviously did speak English.

I think a central question of this movie, as a whole, is whether Kevin Costner is good at acting. He was a massive star at the time, post Bull Durham and Field of Dreams, big enough to get several movies made basically just because he wanted them to be and also to make his directing debut. The thing is, he basically plays Kevin Costner in every role. As when Clint Eastwood is growling his way through Unforgiven, it is generally impossible to discern whether anything’s he doing is actually acting. He also seemed to show his naked butt in most of his roles, and yep, that’s here too. With distance from Costner’s megastardom perhaps comes the idea that more and more people who see this movie will, like me, be somewhat baffled as to what his appeal was ever actually supposed to be. And the thing is, I really like many of Costner’s movies. It doesn’t hurt that a bunch of them are about baseball. But he’s also usually pretty much the least interesting thing about any of them. After Dances With Wolves, he would have several more hits (Robin Hood: Prince of Thieves, JFK, The Bodyguard) before basically torpedoing his career with the twin mega-flops Waterworld and The Postman in the mid-90s, the latter of which was the next movie he directed. 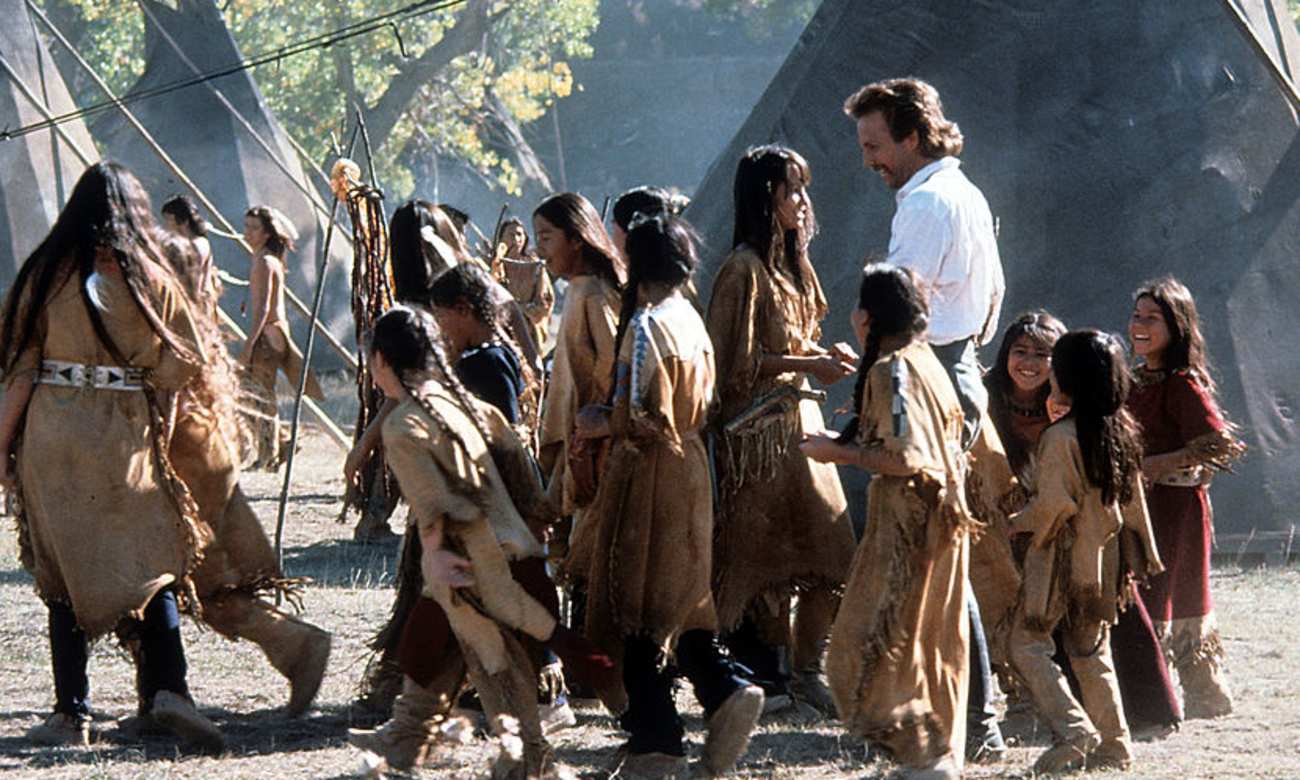 Giving much more interesting performances are basically everyone else in the movie, including Graham Greene, as Kicking Bird, and Wes Studi, who plays the Pawnee chief (that the Pawnee are basically portrayed as straight up villains in comparison with the Sioux is another weird wrinkle of this movie), who have gone on to be probably the two most prominent Native American actors of the past few decades. Michael Blake, meanwhile, had been a struggling screenwriter with one produced movie to his name (Stacy’s Knights), which had just happened to star Costner. Dances With Wolves started out as a spec script he couldn’t sell, which Costner encouraged him to turn into a novel. Costner then bought the movie rights, and went around Hollywood trying to get someone, anyone, to pay for the movie. But Westerns were at probably their lowest all-time point in their popularity in Hollywood history, and nobody would bite. Eventually, it was mostly paid for on a surprisingly small budget mostly by foreign distributors and Costner himself, all of whom made a mint when it turned into a surprise big hit.

Dances With Wolves was widely proclaimed to be the first Western to win Best Picture since Cimarron in 1931, but it is, if anything, the flip side of a Western. If it is an essential American film today I think it’s because of that job it does as a counterweight to the long history of Hollywood Westerns telling the story of white men conquering the West. One movie can’t do that by itself, but at least there is this movie, and it’s mostly successful at what it’s trying to do. If you’re going in expecting a big huge three hour movie with lots of excitement, this is not it. There is a lot of interesting cinematography of the American Plains, and an interesting, if occasionally inaccurate, depiction of a different culture that most movies ignore. It is all dragged down by that toneless Costner narration, and yes, it’s very dumb that Kevin Costner has a Best Director Oscar when, say, Quentin Tarantino doesn’t, but overall this specific movie is good at what it’s trying to do.