The easy comparison for Solaris is 2001: A Space Odyssey, but in fact Andrei Tarkovsky’s Soviet sci-fi epic can perhaps be seen as a response to that film. If Stanley Kubrick has some sort of technocratic vision of mankind transcending its humanity through traveling to the stars, Tarkovsky’s vision is of man never being able to escape his essential human muck, no matter how far away from Earth he gets. If the most memorable shots of 2001 are of meticulously-reproduced spaceships, the most memorable shots of Solaris are close-ups of faces. We are too human, the film thinks, to ever truly be able to understand or communicate with an intelligence from another world.

The first things you probably figure out, watching Solaris, are that it is very long (well over two and a half hours), and the amount of actual plot points during that time are very limited. Tarkovsky was likely the best-known Soviet director of his era in the West, with Solaris perhaps his most successful film from that standpoint. His films are not interested in providing easy answers, or in giving the audience what they want. He also loves to hold shots for long periods, longer than you think is possible. In these moments, his films go from being a movie to being something closer to visual art. There is one early sequence in which we watch a character ride a car around a vaguely futuristic city (shot in Tokyo, without further special effects), as increasingly dramatic electronic noise blares on the soundtrack. At first I wondered, is something happening? Am I missing something? But no. Tarkovsky has something specific in mind, and I’m not going to try here to figure out what that is. The vaguely tongue-in-cheek story goes that, having spent the money to go to Tokyo for these shots, he got his money’s worth by using every moment of film that he shot in the actual movie. 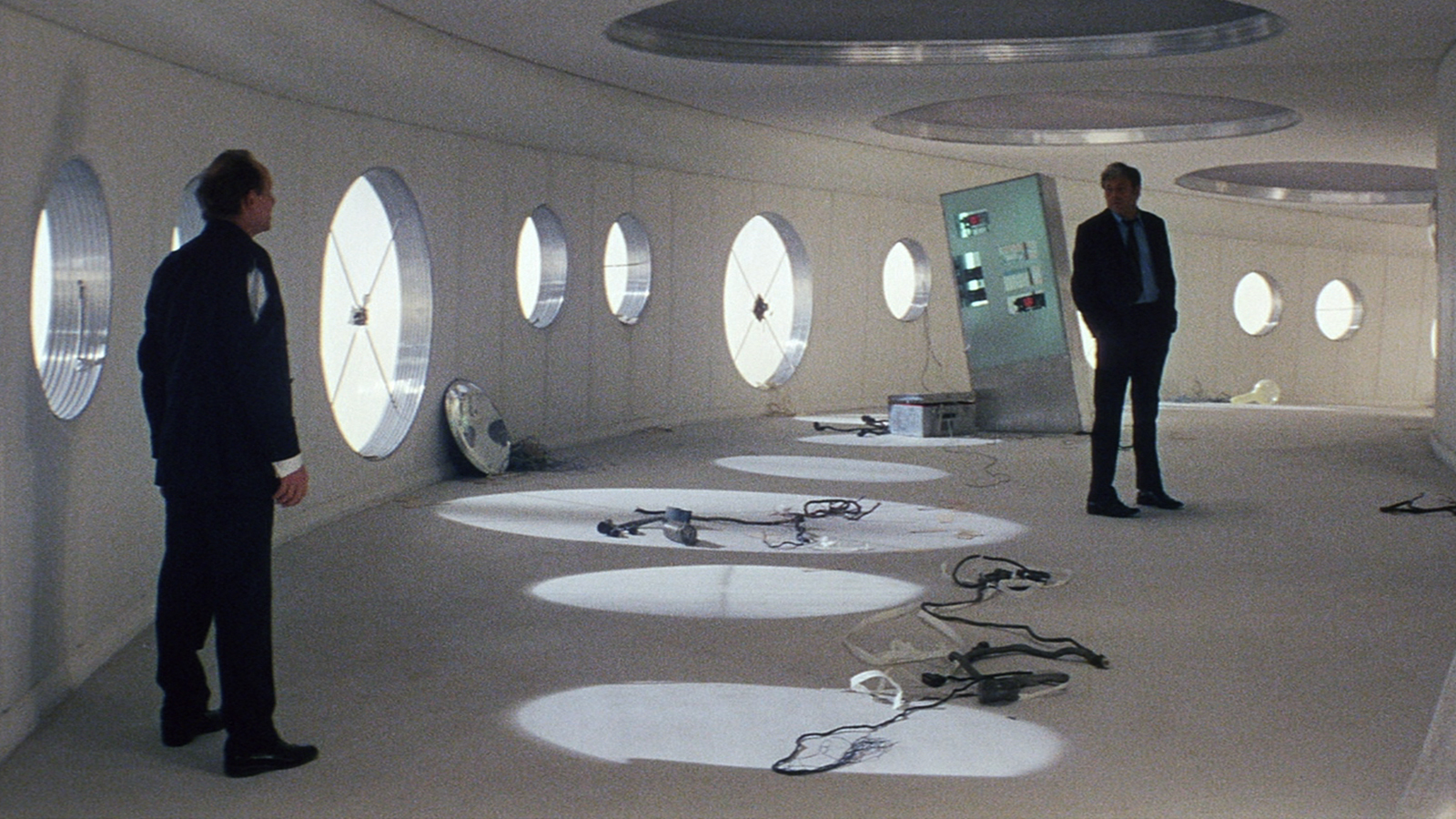 Solaris begins on Earth, at the country home of a psychologist with the interesting name of Kris Kelvin (Donatas Banionis). Soon he is sent to a space station circling a planet called Solaris, with the mission of figuring out why the scientific research being conducted on the station has gone awry. The planet is covered with a swirling, strange ocean, which some have theorized constitutes a sort of planetary brain, but all attempts at contact with it have failed. Kelvin finds the station mostly abandoned, with one of the three scientists he expected to find having killed himself before he could get there. There also appear to be other people on the station, who he only gets glimpses of, people who aren’t supposed to be there.

Soon, to Kelvin’s astonishment, a woman appears in his room, a woman who claims to be his wife, Hari (Natalya Bondarchuk). But Hari killed herself years earlier on Earth, after Kelvin left her. So who is this? He tries to send her away in a spaceship, but she reappears. She severely injures herself, but the wounds immediately heal. Should he be horrified by this development? Overjoyed? Is this the planet reaching out to try and communicate, or some sort of weapon? It doesn’t seem like a spoiler to say that these questions aren’t exactly answered in the course of the movie. 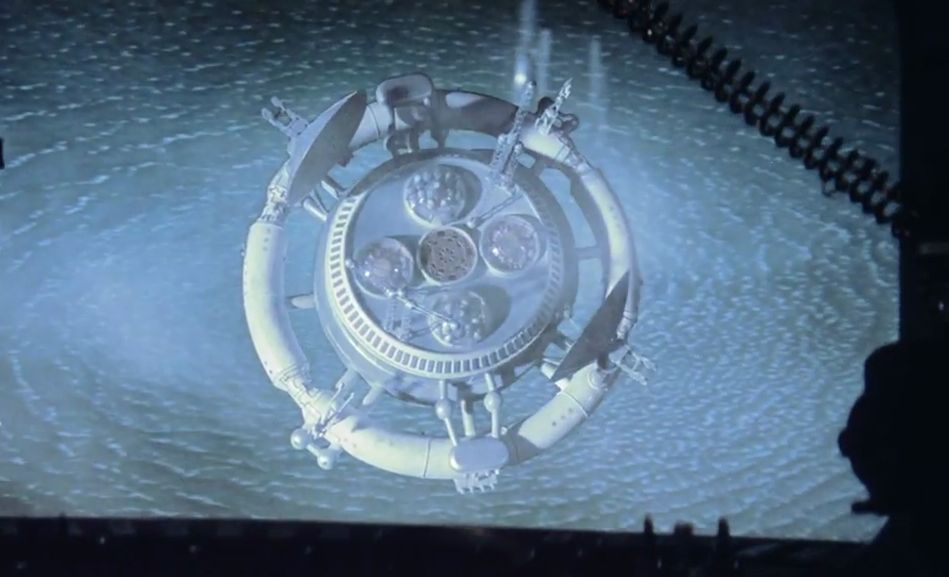 This performance as the mysterious Hari made Bondarchuk, herself the daughter of a famous director, into a star in her native Russia, and it is certainly a really good one. For me probably the film’s most memorable scene comes when, realizing that she isn’t the “real” Hari, her character tries to kill herself by drinking liquid oxygen. Kelvin finds her body frozen into crystals in a very visually-striking image, but after a minute she slowly comes back to life, gasping, “Why? Why?” I have seen different versions of the “seemingly dead person comes back to life” in a bunch of different genre TV shows and movies, and this is probably the most effective. Tarkovsky apparently told Bondarchuk to play the scene as if “she was coming back to life through death,” and she sort of does communicate that.

The film is based on an internationally popular sci-fi novel by the Polish author Stanislaw Lem, with whom Tarkovsky consulted while making the movie but apparently hated the finished product with a fiery passion. It appears from anecdotal evidence that Lem couldn’t conceive of movies as doing absolutely anything other than providing direct visual illustrations of what he had written in the book, which is… not how movies work. While Lem’s book concentrates more on the total inadequacy of human understanding in the face of alien intelligence, which is certainly a theme of Tarkovsky’s film, Tarkovsky himself is more interested in the phenomenon of the “Guests” (as the characters in the movie call the people that appear to them) as a metaphor for grief and loss. When we grieve for someone, are we grieving for the real them or that person as we remember them? How does it happen that we can let that grief sometimes take over our lives?

It is not the fault of Solaris that, in giving its characters the backstories of dead family members, it today falls into the trap that so many subsequent movies have. In an era of internet videos purporting to show “everything that’s wrong” about movies, or “explain” endings to movies that decidedly do not need the endings explained, I think viewers often object when characters are just sad for no reason. They have to have a reason, some trauma they’re working through. It’s trauma as a substitute for character depth. In reality, you don’t have to have some big reason why you’re sad, you can just be depressed. At least a few more recent things have tried to show this; it’s one reason I’m a big fan of the current season of Tuca & Bertie. There’s a TV show I bet you wouldn’t see referenced in this essay.

Tarkovsky’s films, and Solaris in particular, have had an outsized influence on subsequent, more “mainstream” directors. James Cameron purports to idolize him, while Alex Garland (whose films include Ex Machina and Annihilation), basically seems to owe his career to his Tarkovsky influences. The heavy influence of Solaris on another of my personal sci-fi faves, Event Horizon, has been frequently remarked on. Most obviously, after several Hollywood attempts to get an English-language remake off the ground (ironically, I have a feeling part of the reason the Soviet censors allowed the original to pass basically intact was its vision of a future where everybody speaks Russian), Steven Soderbergh directed a 2002 American adaptation with George Clooney in the central role. Though this version is fairly decent, as remakes go, and has state-of-the-art special effects, it lacks the poetry and vision of the original.

Solaris clearly lacks the budget of even some of its contemporaries, but it mostly makes this work for it through some creative solutions. Solaris’ “ocean” is apparent a weird mix of acetone and other chemicals, filmed in close-up. The mostly-abandoned space station is highly effective, looking, as the Unspooled podcast episode on this movie put it, “like the back of a Circuit City crossed with an Ikea.” Those who aren’t quite as effusive about the movie accuse it of being over-long and dour (Time magazine ran a review at the time that unfavorably compared the movie to the “fun sci-fi” of Forbidden Planet). And yes, some of the longer slower bits are probably unnecessary. But Solaris is one of those film experiences you don’t forget, and a definite recommendation for anyone who thinks of themselves as a sci-fi fan.