I listen to a lot of podcasts and one of my long-term favorites is How Did This Get Made?, in which three “hey it’s that guy!” actors (Paul Scheer, June Diane Raphael, and Jason Mantzoukas) break down terrible movies in excruciating detail. They have been going for 11 years and over 250 movies at this point. Anyway, a couple months ago they released an episode on The Visitor, a 1979 “science fiction/horror” movie that I had never heard of before. I haven’t written too much so far on this site so far about my love of terrible movies, but after I saw The Visitor I immediately knew I needed to tell people about this. I don’t know if it’s an amazing movie or an awful movie. Probably both.

The Visitor had a director, writers, etc. from Italy (and some of the weirdness may have been because they couldn’t communicate effectively with anyone else working on the movie) but it was shot primarily in Atlanta with a pretty much top-notch cast that includes Lance Henriksen, Shelley Winters, Mel Ferrer, Glenn Ford, and, for some reason, multiple famous directors in acting roles, including John Huston and Sam Peckinpah. At the time, reviewers accused the movie of directly ripping off fare ranging from The Exorcist to The Omen to Close Encounters of the Third Kind. And it certainly does rip off all of these things. Perhaps a better description, closer to the present day, was by the critic David Ehrlich, who called it “a remake of The Bad Seed as filtered through the acid-tinged mind of Alejandro Jodorowsky.”

The opening scene of The Visitor takes place on some bizarrely-tinged planet, as an elderly man played by John Huston and an evil tween girl played by Paige Conner stare at each other (the RiffTrax for this movie refers to this as “the first ever movie scene to be shot inside of a bong”). Cut to Franco Nero (a semi-famous Italian actor, in an uncredited cameo) playing a character that seems for all appearance to be Jesus Christ, explaining to a room full of bald people that “Sateen” (totally different from Satan, you guys) was exiled to Earth by “Yahweh,” but had “descendants” with many women who may re-emerge at any time to wreak havoc. If this didn’t give you an idea of what we were in for, the movie then suddenly cuts to an Atlanta Hawks basketball game, with the team’s new owner (Lance Henriksen), his girlfriend (Joanne Nail) and her daughter Katy (same tween as before!), who we can tell is evil because she’s wearing sunglasses inside. As Kareem Abdul-Jabbar, in a cameo as himself, comes down the court to score the winning basket for the other team, the movie keeps cutting back to Katy and I expected her to use her telekinetic powers to trip him up or something. Instead, she causes the basket to literally explode just as he’s about to dunk. Everyone in the arena seems to think nothing is amiss and just celebrates the win.

It is soon revealed that Henriksen’s character is part of some sort of shadowy conspiracy led by Mel Ferrer, which has rewarded him for fathering a son through this cute blonde lady (who, it is vaguely implied, is one of these descendants of “Sateen”), for which he has been rewarded with wealth and success (which he used to buy a basketball team apparently). Why a son is needed when he already has an evil daughter with psychic powers is not discussed, but I suppose the answer is “the patriarchy.” Meanwhile, John Huston appears from, I dunno, space, to fight Katy, or something, while meanwhile the family hires a new maid played by none other than Shelley Winters, who immediately realizes Katy is evil.

This plot description does not do justice to the things that actually happen in this movie, along with the way the movie presents them with a mix of unselfconscious bombast and tonal whiplash. Katy not-so-accidentally shoots her mother in the back in the first half hour of the movie, putting her in a wheelchair for the rest of the running time. The family installs the world’s fastest wheelchair elevator on the front stairs and little else seems to change. A detective looks into the shooting (former Hollywood heartthrob Glenn Ford), especially after Katy tells him to “go f*** yourself.” However, he dies when Katy’s pet falcon (that is a thing) pecks out his eyes while he’s driving and he drives off a bridge and the car explodes. Like there are literally multiple shots of a beak going into an eye.

Other things that happen here include Katy throwing two dumb teenage boys out of an ice-skating rink and through what the front window of what looks like maybe an Applebee’s, all while John Huston’s character slowly walks down the world’s longest escalator (literally, by the way, the escalator is the one at CNN Center that really was the tallest in the world, but it only went up so he had to walk unimpressively down a stopped escalator), Katy’s mom getting rammed through a random aquarium in her house, the family’s very fancy house having a “7-Up” branded chandelier that makes it into several shots, a dramatic children’s gymnastics montage, Katy and John Huston calmly playing Pong while they discuss whether he will take her back to space with him, and, at the movie’s climax, John Huston attacking everyone with what appear in some shots to be a bunch of mechanical birds with needles in their mouths (one kills Henriksen by poking him in the throat) and yet in other shots are obviously just a bunch of actual pigeons. 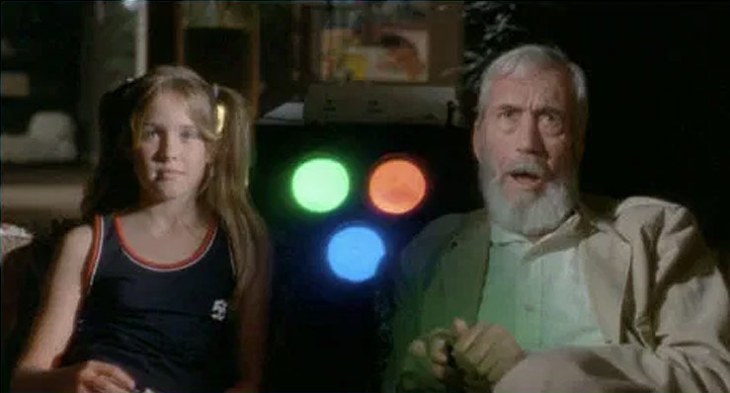 Enhancing the mood are some really spectacular late-70s musical cues, which often seem to have no relation to what is actually happening on screen. Probably my single favorite thing about the movie is the way that, whenever Huston casually saunters onto the screen, we get this massive, almost disco music sting, no matter how appropriate it may be to the actual situation. I’m going to put the soundtrack here, the theme for Huston’s character is the bit right at the beginning.

The thing about The Visitor is that it is both enjoyable on pretty much its own terms and on a “this is very bizarre and simulating for me the experience of being on drugs” level. The cast is giving it their all, especially, I’d argue, Nail as the terrorized mother and Conner as the evil child, even though they are two least known actors in the movie. Conner is actually giving one of the better kid actor performances I’ve seen in a while. Anyway, the effects are very fun and cheesy. But at the same time it is just so, so weird, and so many things that were supposed to be serious just made me crack up gleefully. Look, if “The Exorcist but as a prog rock concept album,” except making even less sense, is not enough to get you interested in a movie, OK, but let’s be clear, if it isn’t, what are we even doing here? Anyway, the movie is now more available than it’s been in decades, with a streaming and BluRay re-release after being “out of print” for years. Only positive things can come from this.