Few movies are simpler than Ladri di Biciclette (Bicycle Thieves), which plays more like a fable than a normal movie. But if it’s a fable, it’s an angry one, written by a communist and filmed in the stark, poverty-riddled aftermath of World War II in Italy. It is perhaps the definitive film of the “Italian Neorealist” movement, making such an immediate impact on its release that, only four years later, the first decennial Sight & Sound poll would name it the greatest film of all time. It also won an “Honorary Oscar,” because there was no separate Foreign Language category at the time. As Roger Ebert wrote, Ladri di Biciclette is “so well-entrenched as an official masterpiece” that it’s startling to revisit it and find “it is still alive and has strength and freshness.”

Certainly there were places in the US where you could see German silent films in the 1920s or glossy French productions in the 1930s, but Ladri di Biciclette might have been the first “foreign art film,” as distinct from a foreign version of the same kind of thing Hollywood was putting out, to really make a big impact on the American scene. In sharp contrast to “mainstream” movies at that time, director Vittorio de Sica filmed with primarily non-professional actors and exclusively “on location,” rather than on sets. In this case, he shot mostly on the wrong side of the Roman tracks, so to speak, and cast Lamberto Maggiorani, a factory worker, as his leading character Ricci.

As I said, the story is very straightforward. Ricci is picked out of a throng of men waiting at a job office because he says he has a bicycle. In reality, his bicycle’s at the pawn shop, but his family, which lives in a tiny room in a decrepit apartment block, needs the money so badly that they pawn all their sheets to get the bicycle back (there’s a shot of the pawn shop keeper climbing a ladder to reach the top of a wall filled with people’s sheets). His job putting up posters at first seems a godsend, but almost immediately his bicycle is stolen, likely by another desperate man. Most of the rest of the movie is Ricci and his son (Enzo Staioli) searching Rome for the bicycle as best they can, though it seems increasingly hopeless. Eventually Ricci miraculously sees the guy again and follows him to an even more run-down part of town, where the locals stick together, the bicycle is nowhere to be found, and Ricci has only his word, so the policeman who shows up can’t do anything. In the last fifteen minutes, Ricci and his son sit outside a packed soccer stadium as he stares at a bank of the fans’ parked bicycles, until he is tempted into stealing one himself. This fails almost immediately, and the kid looks sad.

So, we’re clearly saying something about the plight of the working class, and so on. But the reason the movie works as well as it does is the very straightforward way it presents all of this. It feels very much like watching regular people go through all these things, completely trapped by the desperate circumstances. Even the kid, while occasionally maudlin, actually works perfectly well. There’s one scene where Ricci, feeling hopeless, takes his kid for a pizza he can’t afford, and the kid stares at the people eating plates of pasta at the next table. “To eat like that, you’d have to have a million lira a month,” Ricci explains. The kid is not thrilled. The whole movie depends on this kid with even less training than most child actors looking believably depressed and upset without it being over-the-top and ridiculous, but it works. 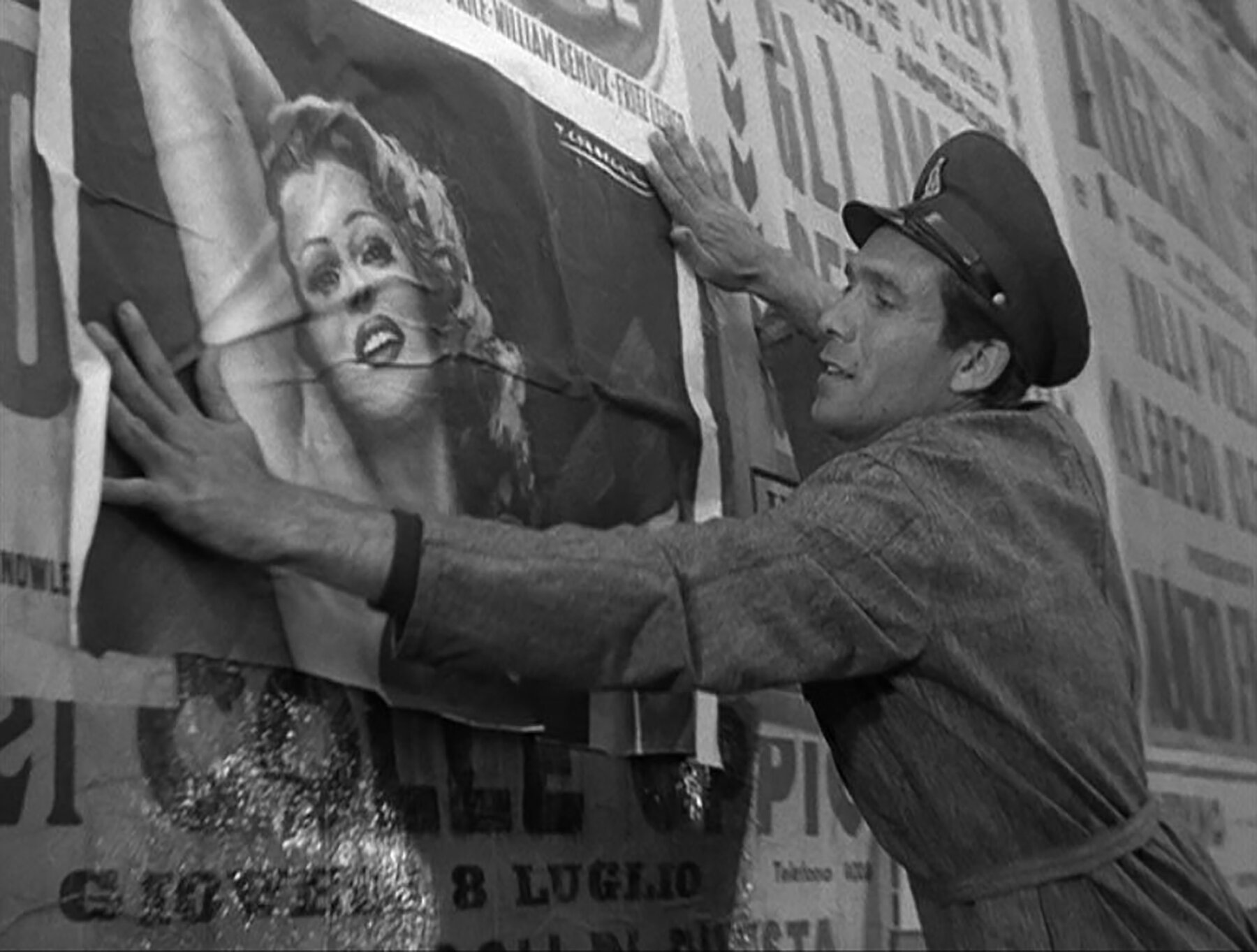 Ladri di Bicicletta has even been called a “marxist film,” given that its primary screenwriter, Cesare Zavattini, was a “card carrying member of the Communist party,” to use some of the parlance of the day, but I think there’s more here than that. Ricci keeps running up against bureaucracy, against police regulations, against people who sort of shrug and tell him they can’t do anything. It’s less about the evils of capitalism than the evils of poverty. I get that this might not sound appealing, a movie about the cycle of poverty with a famously downbeat ending. But I think that the way, especially in 1948, this felt so different from your usual Hollywood movie made a lot of people feel “seen,” as the kids say. The whole thing is a lot more immediate, without pushing past that immediacy to artifice on the other side, as at least a few of its successors would.

Because I’m interested in this sort of thing, and it seems particularly relevant here, a word on the translation of the title. The novel the movie was vaguely based on was called Ladri di Biciclette, and that was the title kept for the Italian release of the movie. This directly translates to English as Bicycle Thieves, which works because there’s both the initial thief who instigates the plot and at the end Ricci tries to steal a bicycle himself. But perhaps because English speakers don’t understand the way Italian makes plurals, the movie’s English-language title has been inconsistent over the years. On the original US poster, the title was The Bicycle Thief, which would seem to be a slight distinction but I think says something fundamentally different about the movie, and you will still see this title today. Meanwhile, the movie was released in the UK as The Bicycle Thieves, just to be different, I guess. Whatever the title, I think the movie, if not the massive breath of fresh air it might have been on its release, still works as well as it ever did, and is worth seeking out.