The new and 25th James Bond movie, No Time to Die, hits theaters today, after lengthy delays due to the pandemic, and as a big James Bond fan I thought it might be fun to feature the very first Bond film here today. Dr. No was hardly seen as a surefire hit at the time of its release, and was in fact filmed on a very tight budget that leads to some wonky effects and a lack of really memorable action sequences. The movie seems to think it is much more exciting and suspenseful than it actually is, as exemplified by a not-that-interesting sequence involving a spider crawling on Bond in the middle night, accompanied by some truly histrionic music. What the producers may not have anticipated, however, was the immediate and enduring appeal of Bond as a character, and Sean Connery’s portrayal of him. What would become your standard Bond film isn’t fully formed in Dr. No, but the suave, magnetic appeal of Bond definitely is.

Connery plays Bond as a physical, hairy guy who likes to drink martinis, knows exactly what gun he wants to carry, is comfortable either in a super-exclusive fancy casino in a tuxedo or grubbing through the mud in the jungle, and is absolutely certain he can sleep with whatever woman he wants. I was particularly amused that Bond isn’t just portrayed here as a guy who is interested in every woman he comes across, but he is openly lusted after by basically every female character in the movie. In one scene he checks into his hotel and, as he walks off afterwards, we stop to watch the girl working the desk to approvingly look him up and down and stare at his ass. She gets no actual lines. This sort of thing happens repeatedly.

The plot of Dr. No, such as it is (I never 100% fully understood what the bad guy’s actual plan was, beyond “world domination”), involves a British spy going missing in Jamaica (we know he has been assassinated, in the movie’s opening scene), and Bond being dispatched to look for him. He has the help of various other operatives, including Hawaii Five-O star Jack Lord as CIA Agent Jack Leiter (played by Jeffrey Wright in the current Bond incarnations) and John Kitzmiller as a Cayman fisherman who ends up having a surprisingly major part before getting randomly burned to a crisp two thirds of the way through. He is also assisted by black market shell diver (that’s a thing, right?) “Honey Ryder,” played by the Swiss actress Ursula Andress, the first of a long line of “Bond Girls.” The choice of name means Bond can keep calling her “Honey” the whole time without seeming sexist, though I mean, he’s definitely sexist anyway.

The scene with Andress appearing out of the ocean dressed in a skimpy white bikini (complete with a prominent knife scabbard on her hip, has been oft cited as one of the sexiest moments in all of the movies. Not to say that Andress (who I remember my mother referring to as “Ursula Undress”) isn’t incredibly beautiful, but I do think that this impact would have been much greater at the time, when we hadn’t seen so many similar bits in many other movies. I do appreciate that the movie’s impulse is to offer equal opportunity eye candy: the movie is happy to get Connery’s shirt off at every opportunity, and in one scene where both Bond and Ryder have to strip down for “radiation decontamination,” we probably see more of him than her. 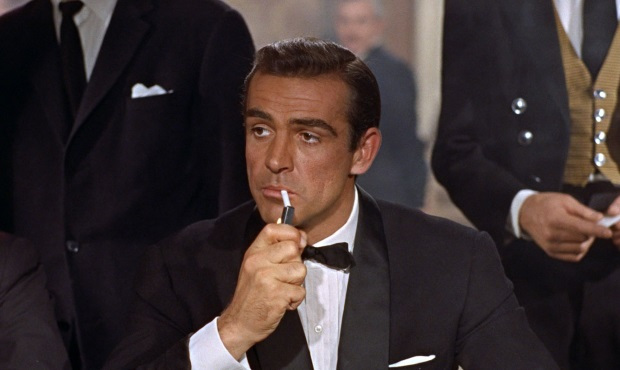 If some of Dr. No’s elements made it into every subsequent Bond movie, some were probably better off left at the wayside. The titular villain is played by Joseph Wiseman, who wore make-up to give him slantier eyes so he could seem to be “half-Chinese.” There’s no particular reason why he would need to be Chinese, or for him to be played by a white dude in makeup, but the movie is very insistent on both. He’s not the only person wearing Asian “yellow-face” makeup in the movie, a practice that would be seen as wildly racist today. Zena Marshall, as a British embassy worker who Bond apparently seduces, is also wearing makeup to make her look more Asian, seemingly because otherwise the movie doesn’t think we will buy that she would work for a Chinese guy. In the meantime, Bond, who we later learn strongly suspects she is a double agent, hangs out at her place and has sex with her, which she goes along with because she has been told by a mysterious voice on the phone to “keep him there as long as possible.” Afterwards he arrests and she spits in his face. The whole thing is weird.

As a movie, I had fun for most of Dr. No, though I did think that it dragged precipitously in the middle. This is hardly a masterpiece of suspense. In terms of effects, it occasionally reminded me of a period episode of Doctor Who, though I did like the prototypical over-the-top villain lair in the final act. This is hardly a revelation, but Austin Powers’ breakout “Dr. Evil” character likely owes more to Dr. No than to any other prior villain. There’s no “chemistry” between Bond and the villain the way there would be with, say, Auric Goldfinger, and for at least half the movie he just drives around Jamaica questioning people about one missing guy, without really getting wind that anything crazier is at work. Both tonally and structurally, the movie is all over the place. We start out with the original, iconic Bond title sequence, with starting with Bond shooting directly into the camera as that classic theme plays. But the next thing the movie does is cut to three beggars walking down a dirt road while a reggae version of “Three Blind Mice” plays on the soundtrack. That’s how the first Bond movie starts.

What this means is that, while No Time to Die is substantially longer, I’m sure, Dr. No feels like 20 minutes too long. However, I still found it wildly entertaining and funny, with excitement and action that are cheesy and fun, but not in an amusingly-terrible sort of way. It may have been filmed on a shoestring, but Dr. No made not only made back over sixty times its budget in worldwide box office, it started a franchise that is clearly still going strong today. I’d recommend Dr. No to people who like fun, explode-y movies in general, and definitely to any modern Bond fans.