Certainly there are many silent films that seem remote and, at best, quaint in comparison to our modern world, both in terms of content and in terms of technique. The Crowd, however, is maybe the most modern of silent movies I’ve ever seen. It came at the end of the silent era, when sound films were already at thing, but sound movies would not achieve the level of technical prowess displayed by The Crowd for some time. It was shot, not in a studio like many of its contemporaries, but “on location” in 1920s New York City. As such, it feels somehow unlike pretty much every other movie I’ve seen in terms of being a direct window into a very different time.

Perhaps more interestingly, a movie could be made today with basically the same story as The Crowd, though it might now seem a little cliched because the movie feels no need to put any sort of twist on it. Our hero (James Murray) is told from birth by his father that he’s destined for great things, but then we see him as one drone in a sea of desks doing… accounting, I guess (the visuals remind me greatly of The Apartment). Soon he meets a girl (Eleanor Boardman), they go on one nice date, and then decide to get married. He keeps daydreaming at work and thinking up advertising slogans he intends to sell, but apparently never sends them in.

The Crowd’s vision of these people’s marriage is surprisingly realistic for a 1928 movie. He promised her the world, but suspects more and more over time that the crappy apartment and his crappy job are just going to be their lives. They have a surprisingly realistic big fight at one point, where she threatens to leave him over something trivial, and then seems disappointed he makes no attempt to stop her. Eventually they reconcile when she announces she’s pregnant (also realistic to a lot of relationships). He promises her the world again, but nothing really changes except the kids are annoying. Eventually he does win $500 (a lot of money in 1928) for one of his slogans, and the couple celebrates but we later see the wife’s budget for the money, most of it goes to “paying off bills.” In all the distraction, their daughter is hit by a car and dies. Understandably distraught, our hero’s performance at work suffers, and when his boss calls him out on it he quits. As one title card notes, “The crowd will always laugh with you, but it will only cry with you for a day or two.”

The final portion of the film was apparently reworked to allow for a “happy ending” at MGM’s insistence, though in practice I’m not sure it actually plays as one. The husband goes from job to job, repeatedly quitting after a few weeks when he doesn’t find it fulfilling. Eventually the wife’s two brothers scornfully offer him a job in order to help their sister out, but he refuses, saying he “doesn’t want a charity job.” After his wife yells at him, he goes for a walk and stares mournfully off the side of a railroad bridge and we realize he is thinking about killing himself, but stops after his son says he loves him. He then gets a job wearing a sandwich board and goes home to his wife, who it turns out was about to leave with her brothers but has decided to stay. They go to a vaudeville comedy show, where their laughing faces are just two of dozens in a crowd.

So The Crowd has a fairly realistic treatment of a marriage and an actually interesting character study of James Murray’s husband, who it seems always assumed things would work out and becomes despondent when, even after he works hard, they just don’t. It is also surprisingly modern in some of its cinematography and direction, given its frenetic 1920s New York location. Combined with the somewhat bleak story, this allowed writer/director King Vidor, one of the biggest creative names in Hollywood at the time, to sell his idea to MGM as an “experimental film.” For some of the “crowd” scenes, Vidor even used hidden cameras, so everyone except the actors may not have realized they were in a movie.

In fact, this realism may have been why the movie ended up falling off the list of classics, taking decades to rediscover despite being a modest hit at the time that received multiple nominations at the first Oscars. It came out the year before the Great Depression, and hard, realistic dramas about the lives of the lower classes fell by the wayside in favor of escapism. This kind of kitchen sink realism wouldn’t come back into vogue until after World War II (as in The Best Years of Our Lives), and it would take even longer for The Crowd to make it back into the international canon, but given how many times I’ve seen it referenced working on the site during essays and articles on other films, I’d say that it has. 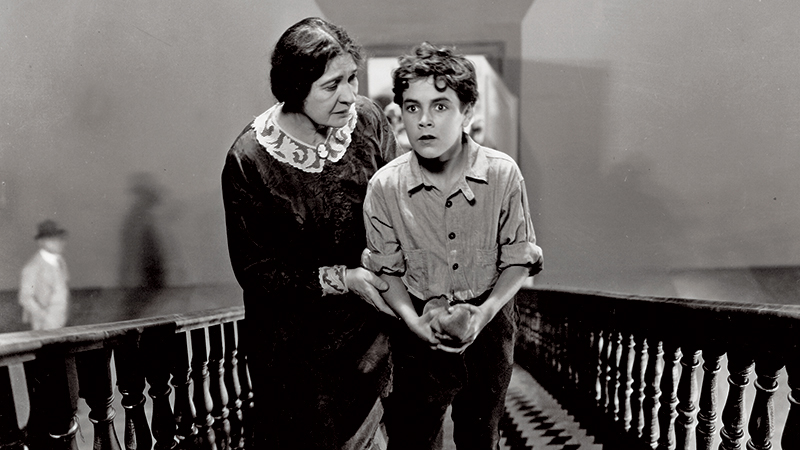 Also in the interest of keeping the audience engrossed in his story, Vidor cast mostly unknowns. Eleanor Boardman was his wife at the time, but this was her first starring role in a movie (she definitely gives the best performance of the bunch). She went on to a successful career as a leading lady. The male lead, James Murray, had only previously worked as an extra, after traveling to Hollywood on a boxcar, hobo-style. He appeared in a few other movies that are far lesser-known today, then succumbed to alcoholism to such a degree that his career was basically over by 1930. In 1934, Vidor decided Murray would be perfect for a role in his new film (Our Daily Bread) and went looking for him. Vidor eventually found him living as a bum on “Skid Row” in Los Angeles and offered the role, but Murray angrily refused a handout (not so different from his character in The Crowd). In 1936, Murray drowned in the Hudson River in New York City, though it was never clear whether his death was suicide or an accident.

Not really knowing what it was going in, I was surprised by how resonant The Crowd remains today. Some of that is the ahead-of-its-time shooting style, but it is also about how, you know, “we live in a society.” That is, it is about stuff that we are still dealing with all these decades later. Its types are still recognizable. In 1928, the idea of how unfulfilling it was to try and provide for your family by working for a giant corporation in a world where you were just one of millions with nothing special about you may have seemed a new issue, I’m not sure, but it is not as if it is merely a passing concern today.