This is the last black-and-white movie to win the Best Picture Oscar for which the lack of color wasn’t a statement, but just how a movie like this got made (Schindler’s List and The Artist are the only black-and-white winners since). If watching old movies is like looking through a window into the past, The Apartment is a particularly interesting one. It is a primary historical document of almost the exact time and place that Mad Men would later spend so much time trying to recreate, the faceless, modernist, monolithic corporate world of 1960-ish Manhattan, where you can’t get too emotional about anything and everybody even wears the same suit. Yet at the same time, it feels unexpectedly modern for a black-and-white movie in many ways. In terms of performances, subject matter, and just general feel, the only reason you couldn’t just put this movie in theaters today (besides Coronavirus) is the lack of color.

That subject matter was controversial in its day, and from a modern perspective is hard to even make sense of. Jack Lemmon plays a corporate drone at an enormous Manhattan insurance company named C.C. Baxter. In an effort to move up the ladder, he allows his various bosses to use his apartment for extramarital affairs. So many take him up on this that he has to make several phone calls to clear one “opening” at his apartment. The idea of, say, taking your mistress to a hotel never comes up. He has a crush on the winsome elevator girl at his building (Shirley MacLaine), but then realizes that she is the girl that his boss of bosses (Fred MacMurray) has been taking to his apartment for liaisons. A bit over halfway into the movie, MacLaine’s character Fran tries to kill herself on Christmas Eve when she realizes MacMurray doesn’t love her, and Baxter is left to nurse her when MacMurray can’t get away from his family. It ends about how you think it would.

Today, the supposedly racy subject matter hardly registers, but it was a big deal at the time. Fred MacMurray would later recount being repeatedly accosted by old ladies, including one that hit him with her purse, for making such a dispicable movie. The National Review, in a negative review, called it a “dirty fairy tail.” But most people did love it, as witnessed by the passel of Oscars it took home. Lemmon and MacLaine, in particular, are irresistibly charming, and there’s something about MacLaine’s character in particular that makes every member of a certain category of men, which may include me, fall immediately in love with her. She may be an early example of the “manic pixie dream girl.”

The Apartment was among the bigger hits of its Director, Billy Wilder, in a long career full of them. He is not someone whose name comes up as much today in classes on film theory as some others, but he directed four separate movies on the most recent AFI Top 100 list, including this one, along with several others that easily could have made that list. He seemingly could do anything he wanted successfully. He directed numerous madcap comedies, but also seemed at home with extremely serious dramas. He was an Austrian Jew who fled the rise of the Nazis, and in 1939 had his breakthrough American hit with Ninotchka, a romantic comedy starring Greta Garbo. In 1945 the American War Department hired him to direct the first documentary film to depict the horrors of the Holocaust, filmed as the camps were being liberated and released in German in an effort to educate the public about the horrors that had been perpetrated. Several members of Wilder’s family died in the Holocaust, including his mother, stepfather, and grandmother. That same year, he won his first Best Director Oscar for The Lost Weekend, a drama about alcoholism. But he also directed many of Marilyn Monroe’s biggest hits just as easily, including his last film prior to The Apartment, Some Like It Hot, which was a hit despite being denied the Production Code seal of approval for its sexual content.

I really like this movie, and it’s definitely a comedy, but like a lot of older comedies it’s less joke-driven than feel-driven. Jack Lemmon is the sort of guy who strains spaghetti with a tennis racket, and that’s kind of how this whole movie is. One running plot point is that the other people who live in his apartment building generally hate him because they think he’s bringing home a different woman every night, and then when Fran tries to kill herself in his apartment they assume that it’s because of him. Just as I genuinely don’t understand why his bosses don’t just take their ladies to hotels, I don’t understand why this movie never really considers the idea that this whole problem could be solved if Lemmon just told his neighbors the truth. It’s a secret he has to keep, but there’s never that scene a modern movie would have where his landlady tells him that he can’t have any unauthorized visitors, or whatever, to justify the plot. The most prominent of these neighbors is a very Jewish doctor from a couple doors down, played by longtime character actor Jack Kruschen, who received an Oscar nomination for his performance. Baxter ropes the doctor into helping him at length after Fran’s incident, and never does tell him the truth. Kruschen’s long TV career started in 1939 (at an experimental early TV station in Los Angeles that broadcast to 200 people on 3 inch screens), and went on to include a villain on an episode of the 1960s Batman series and playing maybe the first pedophile seen on TV in an episode of Dragnet. Where would Law & Order: SVU be without him? 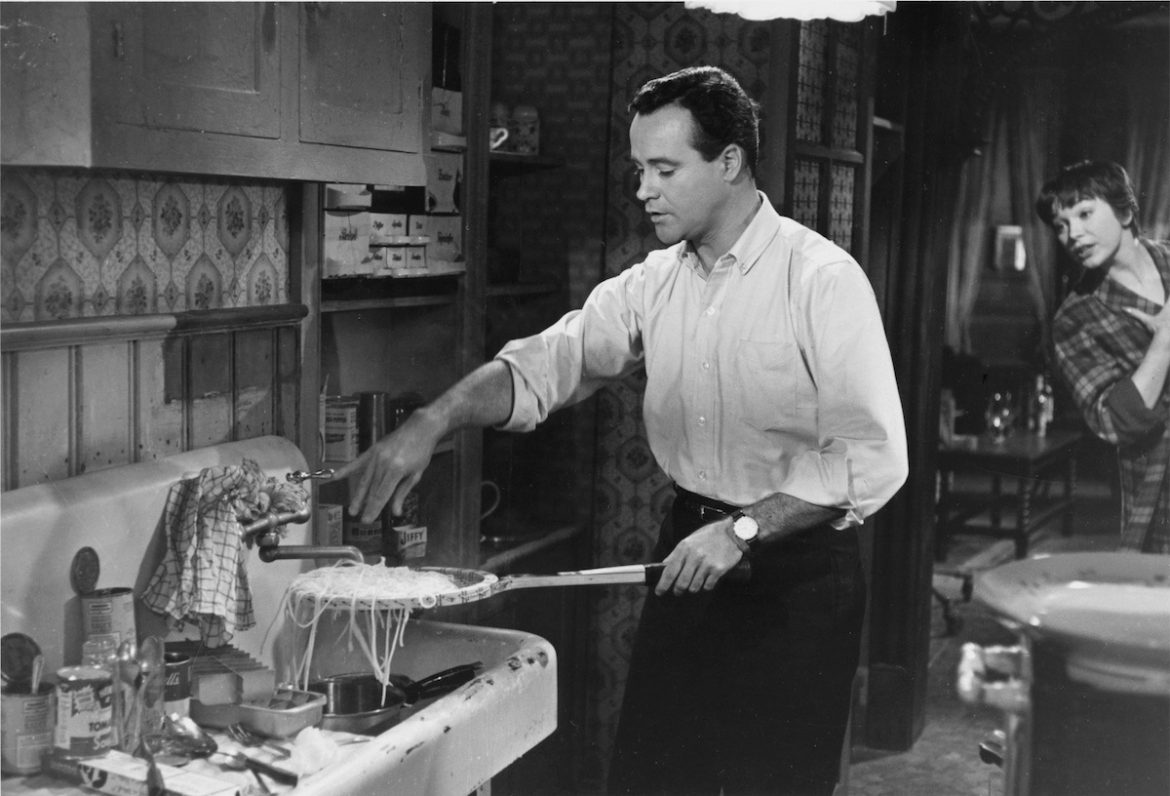 Anyway, I don’t bring up issues with the plot to dump on this movie, I do it to show that, however much we think we understand different periods of history, we don’t always. What feels like the most influential aspect of The Apartment is its depiction of early corporate culture. Baxter’s desk sits in front of a seemingly endless, neon-lit sea of desks. The cinematography uses forced perspective to make the dehumanizing office disappear into the distance. There is no big thing that Lemmon should have done instead of selling insurance, it’s not like he plays guitar or anything, but his big arc in the movie, besides the romance, is figuring out that he has no idea why he’s doing any of this. It’s a hollow world based on hollow promises of nothing, and if you’re not happy with that it’s your fault.

Did I mention this is a comedy? For a comedy, there’s a lot of people trying to kill themselves, and also threatening to kill themselves, or thinking other people are trying to kill themselves when they’re not. But what I always remember about it is Shirley MacLaine. I’m not going to gush because I think it’d come off a creepy, but this is the only movie I’ve ever seen her in when she wasn’t already at least middle-aged (Terms of Endearment, for which she finally won her Oscar, came 24 years later). It’s sort of a revelation. You definitely understand why all the men in this movie have a crush on her. Of all the plot points in this movie, that’s one that definitely makes sense to me.