A Christmas Carol by Charles Dickens is one of the most adapted stories of the movies, with a new version coming out, it seems, every few years. For example, when I went home for Christmas this year my mother put on a movie I hadn’t even heard of before called The Man Who Invented Christmas, which comes at the story from a slightly different angle, imagining Dickens himself (Dan Stevens) speaking with versions of the characters (including Christopher Plummer as Scrooge himself) in the course of writing his story. During the 1950s and 60s, especially, the definitive filmed version of the story was this one, starring the Scottish actor Alastair Sim. It became such a television staple that you’re fairly likely to find it being shown during the Christmas season, even today (we ran across it Christmas night on the FX movies channel, by which point I had already watched it for this blog). Sim’s performance is somewhat bug-eyed, but heartfelt, and the movie includes basically everything from the short novel, even expanding in some areas that don’t really need it. Its original UK title was just Scrooge, perhaps because those areas that get expansion tend to be filling out bits of Scrooge’s own backstory in attempt, essentially, to give at least some explanation as to how he got this way. But in America, it was originally  simply titled A Christmas Carol, so you may find it under either title.

If Sim’s performance in the title role has been influential, and I think it has, I’d say it’s been because, as one negative review put it, he plays Ebenezer as “more a dour dyspeptic than a miser.” That is to say, this Scrooge isn’t just a jerk when it comes to money, he’s basically a jerk to everyone about everything. In the original story (and in the movie version I’ve watched over and over, The Muppet Christmas Carol), we see Scrooge starting out as someone who both cares about various people and is obsessed with money, and learn that he hardened his heart to avoid the pain of losing the people he drove away through his obsession. The extra step this movie posits is why he is obsessed with money, which is that the power it brings him makes him feel safe. In the scene where the love interest of Scrooge’s young life, Alice (Rona Anderson), leaves Scrooge, he argues that acquiring and retaining wealth is the only way for both of them to be safe in a dangerous world. The movie never quite connects the dots for us as to why Scrooge feels this way, but it gives him at least one more degree of psychological depth. He sort of feels like a modern grandparent who believes the scary stories about crime that they see on the local news.

While all the parts of the Christmas Carol story are here, for me the movie’s emphasis on Scrooge’s backstory was ultimately a misstep, though I appreciated that it at least seemed to have made an effort to do something different. Did we really need multiple scenes where Scrooge betrays his mentor Fezziwig (Roddy Hughes) in favor of another businessman named Jorkin (entirely a creation of this movie, played by Jack Warner, a prominent English actor at the time who was probably the most famous person in the cast at the time this movie was made), and then does sort of a “hostile takeover” (this may not be the right business term) of that company with the help of Robert Marley (played as a younger man by a pre-Avengers Patrick Macnee). It felt like someone did a very faithful adaptation of the Dickens novel and then stuck another half hour in the middle of it from their dumb moneygrab prequel, Scrooge & Marley, coming next summer on Disney Plus, in which we learn that “Ebenezer” was the name given to him as a child by a bored customs worker. By contrast, of probably a dozen versions of A Christmas Carol that I’ve seen this is the one that seems least interested in Bob Cratchit (Mervyn Johns) and his family. All the business with Tiny Tim (Glyn Dearman) is here, but the movie doesn’t spend one moment more with them than it absolutely has to. Future Oscar nominee Hermione Baddeley shows up as Mrs. Cratchit but is criminally underused.

Brian Desmond Hurst, born in Belfast, was considered one of the most successful British film directors of his day, though none of his movies are really still in the canon. Of his oeuvre, this is probably the one people today are mostly likely to come across, but in 2015 BBC Ulster named him the “Best Film Director” ever to have come out of Northern Ireland. Here, his work can perhaps best be described as “workmanlike”… at no point in this movie are you going to notice the editing choices or anything like that. Sim was a long-time Shakespearean actor whose performance was seen, for a time at least, as the definitive Scrooge. He remains much beloved in Britain, even after his passing, but I confess that I hadn’t even heard of many of the much-beloved films listed in his obituaries. We have a long way to go on this site! I am, however more familiar with the work of Francis de Wolff, the big old dude who plays the Ghost of Christmas Present (the Muppet who plays the role in Muppet Christmas Carol is basically just a costume version of de Wolff). He gets a rare chance to play a big fun guy here, but spent most of his career playing imposing villains, including in multiple James Bond movies and a whole series of Hammer horror films. 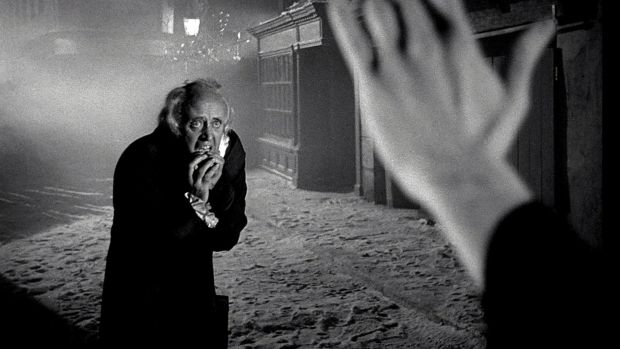 You will still find plenty of folks online calling Scrooge the definitive Christmas Carol movie, and maybe it is in the sense that it was probably, until relatively recently at least, the version that anyone making another version was most likely to have seen. But I’ve seen several versions, and this one is fine but not my favorite. Maybe we don’t need to explain why Scrooge is why the way that he is more than Dickens already did.