We end Holidayfest ‘21 with an unassuming little movie that today is frequently found at the very top of polls or votes for America’s most beloved holiday movie. This is a movie that is annually shown on one of the largest US cable networks for 24 hours straight starting on Christmas Eve. It is also particularly beloved in my hometown of Cleveland, where much of the movie was shot and you can today take a tour of the family’s house from the movie.. Yet I had not actually sat down and watched the thing until this year. The movie is, of course, A Christmas Story.

The appeal of this thing is clear, it is that few films are more made from pure, unadulterated nostalgia than this one. An older narrator (Jean Shepherd, on whose radio stories the screenplay was based) recounts tales from his childhood, all set during one Holiday season. The year is not specified exactly, but through various clues we can date it to about 1940 (World War II does not seem to have happened yet, for one thing). Given that A Christmas Story was released in 1983, most middle-aged people would likely have recognized some of their own experiences, like saving up box tops to buy crappy prizes off the radio, going to a downtown department store to visit Santa (played here with menacing gusto by Jeff Gillen), or having their mouths literally washed out wish soap by their mothers after being caught swearing. One wonders whether the movie will continue to hold up the same way as those people continue to get older and a larger and larger percentage of the population doesn’t actually have nostalgia for those things. Interestingly, I recently saw a new movie (released on HBO Max) called 8-Bit Christmas, which applies, in a general sense the exact same formula: an older, present-day narrator recounts stories in an overly dramatic fashion from a childhood Christmas several decades earlier, i.e. at the time the middle-aged audience was growing up (in that case in the 1980s), and both are even set in suburban Chicago. Both movies are also held together by the central thread of the main character’s pursuit of a desperately-wanted Christmas present, which in 8-Bit Christmas is a Nintendo system, but in A Christmas Story is, famously, a Red Ryder BB Gun. Hijinks ensue. 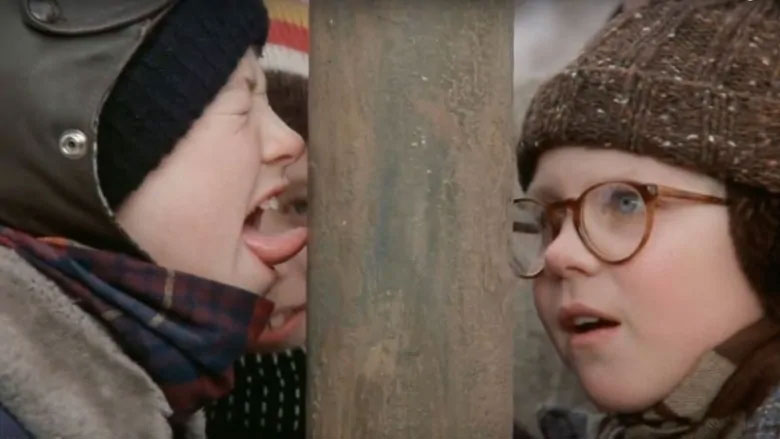 Our central nine-year-old moppet, Ralphie Parker, is played with wide eyes and round spectacles by Peter Billingsley. He lives in the fictional town of Hohman, Indiana (based on Shepherd’s own hometown of Hammond, a Northern Indiana satellite of Chicago), with his father (universally referred as “The Old Man,” played by Darren McGavin), mother (Melinda Dillon), and little brother Randy (Ian Petrella). His parents are loving, good people, though with their own foibles (the father lets loose with one profanity-laden rant, turned into gibberish by the movie, which the narrator comments is “still hanging in space over Lake Michigan.” The only thing Ralphie wants in the world is this BB Gun, but this desire is persistently rebuffed through the movie. His mother, his teacher (Tedde Moore), and even Santa all give him the same warning: “You’ll shoot your eye out!”

While Ralphie tries everything he can think of to get this BB Gun, the movie proceeds through a series of vignettes all based off of prior stories by Shepherd. These include the sudden appearance of a lamp in the shape of a fishnet-clad female leg, which his father loves because he believes it to have been a “Major Award,” but his mother hates. Others may remember Ralphie’s friend Flick (Scott Schwartz) being “triple dog dared” into putting his tongue on a metal in the schoolyard in the freezing winter temperatures and ending up stuck. The movie proceeds through a series of bits in this vein, which, if they are funny, are funny because we as an audience recognize ourselves in them somewhere. 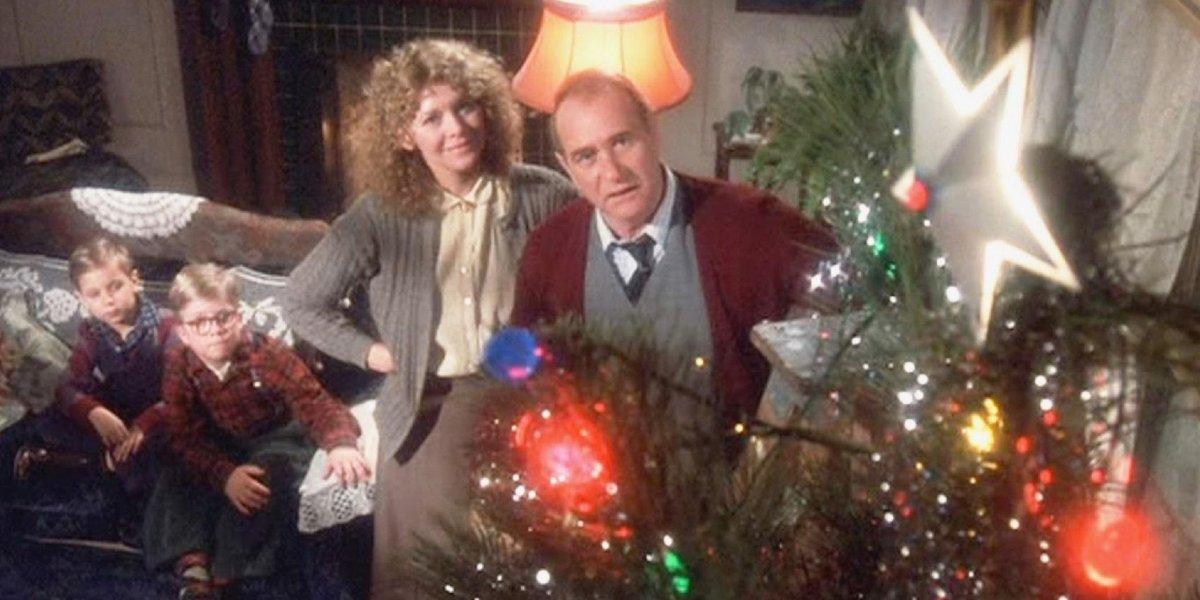 A Christmas Story did not grab me the way it feels like it has many viewers, probably because I am not the target audience. I once heard about a friend’s sibling getting their mouth washed out with soap by their mom, but it was not really something I had to worry about as a kid. More to the point, I found myself not really enjoying spending time with the various characters in the movie, particularly Ralphie. It has been said that all kids are assholes, and if you think that this is not a movie that will do anything to disabuse you of that notion. Suffice to say that there is not a scene in 8-Bit Christmas where our main character beats the crap out of the kid who was previously bullying him. Therein, I’d say, lies the movie’s biggest strength, which is that it does a great job of depicting people, for the most part, as they actually are. Even filtered through the perspective of this narrator, Ralphie acts the way a real kid would act, and his parents act like real parents.

So there are specific, realistic touches that I really like in this movie, like the way Ralphie (and seemingly like 70% of all children) completely lose their ability to function and freak out when handed to a guy in a Santa costume. I also liked the way Ralphie’s mother makes Randy in particular wear like ten coats, such that he cannot lower his arms when he goes outside, and when he falls is forced to roll around on his back like a turtle. But, for me, those things aren’t enough for a movie to actually grab me.

A Christmas Story is considered particularly beloved in my native Cleveland, as I said, but unfortunately the city is forever doomed to play other cities in movies. I would argue that if you’re going to shoot in Cleveland but say your movie is set somewhere else, don’t keep showing the Terminal Tower and Public Square, probably the most famous place in Cleveland. But The Avengers did the same thing decades later, and tried to say it was in Germany and not Indiana, so what do I know. Happy Holidays, everybody.