One of the many criticisms that can be levied against the AFI Top 100 list is that it ignores less “prestigious” genres, like comedy, horror, romance, etc., in favor of things that are seen as more “important” (the list has like five too many movies about the Vietnam War, in my opinion). When a movie from one of those “low-brow” categories does get on the list, they tend to be older, which can lend an air of prestige to these movies they wouldn’t have otherwise. So, when it comes to romantic comedies, you won’t find When Harry Met Sally or Sleepless in Seattle on the list, but you will find 1938’s Bringing Up Baby.

Bringing Up Baby is perhaps the definitive example of the “screwball comedy,” a subgenre popular around this time. Far moreso than you would see in a modern romantic comedy, pretty much every character in this movie is a complete weirdo. They also all have a tendency to talk very fast and not listen to each other. It is this latter trait that gave me my problems with this film. For all of the combined charms of Katherine Hepburn and Cary Grant, I could hardly stand most of their interactions with each other. There is something about this movie that set off my anxiety. To be clear, this is very much my problem, and not the movie’s, but I wanted to yell at the characters to JUST SHUT UP AND LISTEN TO EACH OTHER FOR TWO SECONDS for most of the movie.

The “Baby” of the title is, in fact, a leopard, and is only one of the numerous sources of hijinks in this movie. Grant, normally a strong, handsome type, puts on glasses and plays a hand-wringing, nerdy paleontologist, who is trying to secure funding for his New York museum and has spent the past four years trying to assemble a Brontosaurus skeleton. Christopher Reeve is supposed to have based his performance as Clark Kent in Superman on Grant in this movie. He’s getting married to his extremely matter-of-fact fiancee (Virginia Walker) the next day. Hepburn, meanwhile, plays Susan Vance, perhaps cinema’s first “Manic Pixie Dream Girl.” I cannot better Wikipedia’s description of her as “a free-spirited, somewhat scatterbrained young lady, unbound by logic.” They meet cute on the golf course after she accidentally hits Grant’s ball while he’s trying unsuccessfully to impress a potential donor, then jumps into his car and insists it’s hers (this joke may have made a little more sense at a time when there were like three models of car total that all basically looked the same).

When Hepburn gets a “tame” leopard in the mail from South America (her explorer brother is sending it to her aunt, because that makes sense), she remembers that Grant is a scientist of some sort and calls him to help her take Baby to her aunt’s house in Connecticut. He arrives, thinking she’s pulling his leg, only to discover the leopard hanging out in the bathroom (The Hangover basically did this scene shot for shot in a Vegas hotel bathroom with a tiger). When they finally get to the Aunt’s house, Grant has to conceal his identity for reasons that are not clear to me even after watching the movie, pretending to be a “big game hunter.”

Meanwhile, Hepburn decides she loves Grant (she insists he’s “much handsomer without his glasses”), so she sets out blithely to ruin his wedding and possibly his life. Her rather vague plan includes giving the last bone for his dinosaur (which he has been carrying around all this time) to the aunt’s dog, which the dog of course buries in the garden, forcing him to stay so he can try and get the dog to dig it up. She also takes all his clothes while he’s in the shower and sends them for “cleaning,” forcing him to dress in a lady’s bathrobe. This leads to a scene where he has to answer the front door and explain to the confused neighbor that he “just came over a little gay all of a sudden.” This is thought to be the first use of the modern term “gay” in mainstream media, thought to have improvised by Grant. The term was so new at the time that the censors didn’t know what it meant and left it in. Before the movie is done, there’s even mistaken identity comedy about the leopard, as there is also another leopard on the loose that escaped from the circus. I am told that the same leopard played both parts in what is surely a bravura performance.

This is the second of four films to co-star Hepburn and Grant. Their subsequent outing in The Philadelphia Story (much more my speed) is ranked even higher on the AFI list, while they also appeared together in Sylvia Scarlett and Holiday. Baby was initially seen as a box office failure, and it seemed to be the final straw for Hepburn’s stardom. Unable to find more starring roles in Hollywood, she went to Broadway, where she quickly revived her career. The Director, Howard Hawks, later called it a big mistake to make “everyone in the picture screwy” and vowed never to do it again. But the movie has aged far better than anyone imagined at the time, having been shown over and over on TV in the 1950s and acclaimed by the filmmakers and critics of the 1950s and 60s French New Wave. It would even be remade, very vaguely, in 1987 as Who’s That Girl?, with Madonna, of all people, in the Hepburn role. 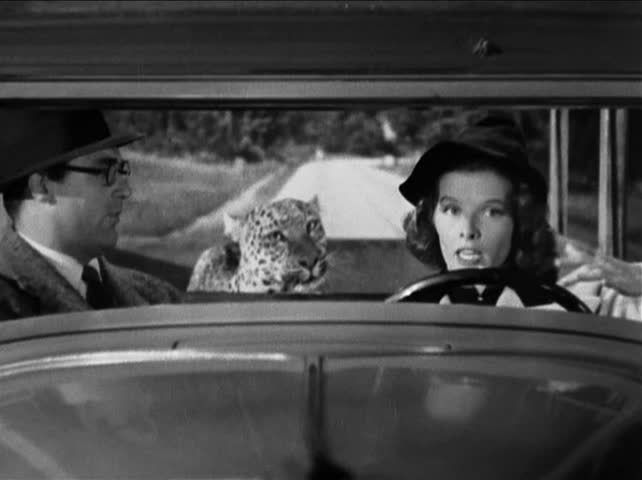 Hawks himself is now more acclaimed than he had been at the time, as well. Popular film critic Leonard Maltin has called him “the greatest American Director who is not a household name,” and Jean-Luc Godard named him as his favorite filmmaker. He made several of the best-known comedies of his era, including perhaps the second-best-known “screwball comedy,” His Girl Friday, in which Rosalind Russell takes up the baton as Cary Grant’s foil. He also made several popular westerns, the best known of which today is probably Rio Bravo. He even dipped his toes into science fiction with The Thing From Another World, the movie John Carpenter would eventually remake as The Thing. You might notice the thing that all these genres have in common, which is that they tend not to be taken particularly seriously by the critical establishment, at least at the time. His only Oscar nomination came for Sergeant York, one of his few forays into “prestige drama,” about a pacifist soldier during World War I played by Gary Cooper. It is not much watched today in comparison to many of his other movies. One item I feel compelled to add from Hawks’ Wikipedia page is that, after a long, full life, he died of “complications from tripping over his dog.” IT IS A REAL THING DUDES YOU NEED TO BE MORE CAREFUL.

I think the biggest reason I’m not particularly likely to revisit Bringing Up Baby is that the characters spend so much of the movie aggressively disliking each other. Yes, Hepburn falls for Grant, but she expresses her love by actively making his life hell. As Grant tells her in the third act, “It isn’t that I don’t like you, Susan, because after all, in moments of quiet, I’m strangely drawn toward you; but, well, there haven’t been any quiet moments!” He ends up falling for her, too, while I would have been left clawing at the wallpaper to escape. When she eventually causes his dinosaur skeleton to collapse to the floor, in one of the most famous final gags in the movies, it works because it is the natural culmination of the rest of the movie. Hepburn’s character is a force of nature, like a tornado; they both destroy everything they touch.