James Fonda gives a famous speech at the emotional climax of The Grapes of Wrath, when his character, Tom Joad, determines that he has to leave his family in order to protect them. “Wherever there’s a fight so hungry people can eat, I’ll be there. Wherever there’s a cop beating up a guy, I’ll be there.” In a far less well known scene earlier on, the Joad family pulls away from the last gas station in Arizona before crossing the desert to California. “They’re not human beings,” one attendant remarks to the other, “No human could stand to be so miserable.” “They don’t know any better,” the other replies, and throws his cigarette on the ground. They’re not talking about Black people, or Mexican immigrants, or anyone else today, but Oklahomans in the Depression. And yet.

I don’t know how much The Grapes of Wrath is seen today, outside of the occasional high school class reading the book on which it is based. That is probably a shame because it depicts an episode of history that is unfortunately incredibly resonant for us today, and likely at most periods of history. But it wasn’t a period piece, but based on things that were still happening. John Steinbeck had spent several months in 1938 with migrant workers, wrote the book in 1939, and it was such a massive hit that a bidding war ensued among studios for the right to make a film. 20th Century Fox won, and it debuted the next year. We don’t really have a modern equivalent of The Grapes of Wrath. It is as if someone wrote a book about contemporary immigration from Central America and it became the biggest hit in the country. 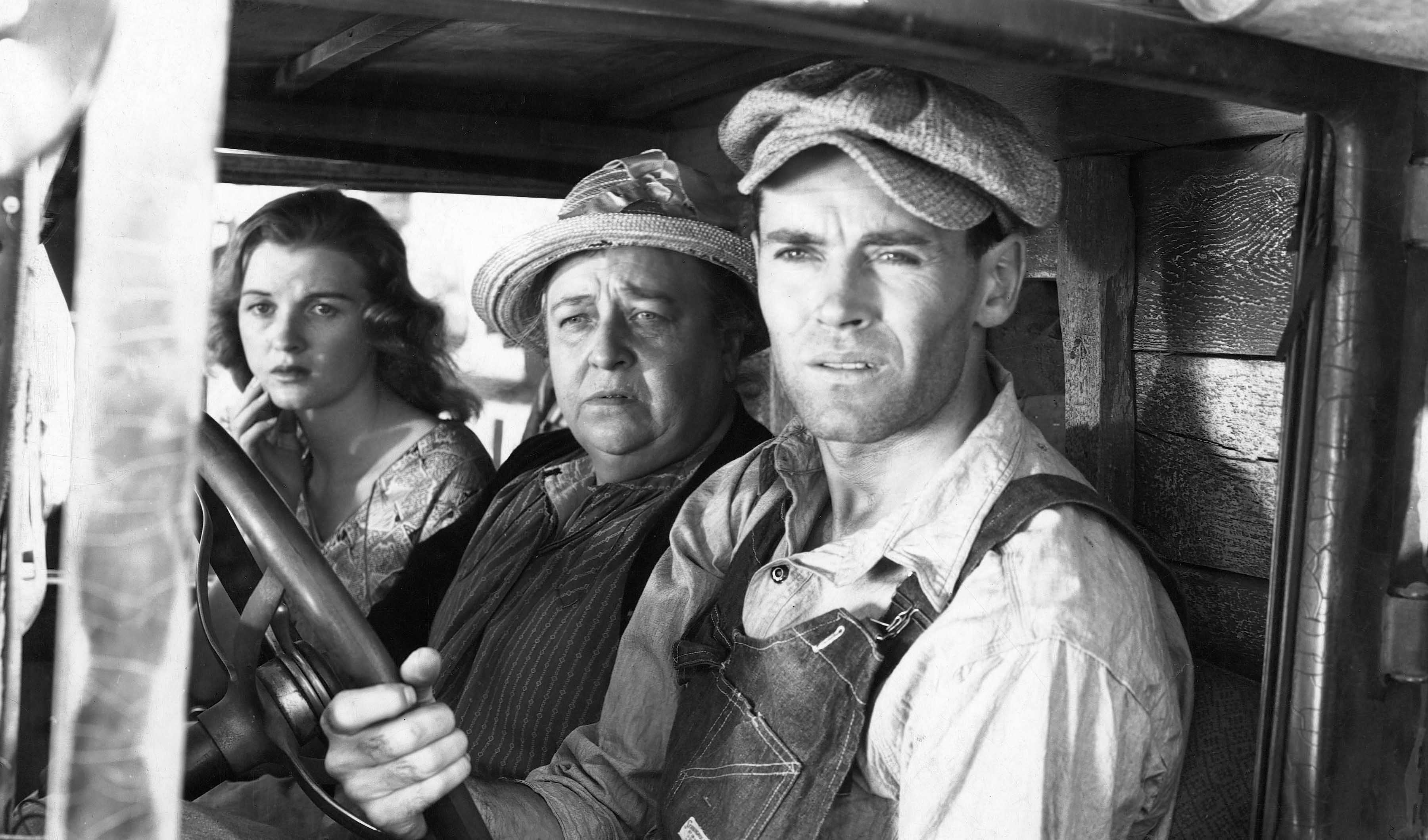 The story follows the Joad family, Oklahoma sharecroppers driven off their land during the Dust Bowl. I feel as if this historical episode is not as well known today as it probably should be, so a quick primer may be in order. During the Great Depression, a combination of economic conditions and environmental disaster made farming in the American heartland no longer profitable for wide swaths of the population. The actual owners of the land drove foreclosed en masse on those who had been living there for the past several generations, and it is thought that a million people lost everything and set out for California. Once there, they discovered it not be the land of milk honey they had been promised by various stakeholders, but rather found themselves unwelcome. The locals didn’t have enough jobs to go around as it was, they said, and those that did find work were made to do so at pennies on the dollar. Many of them did, out of desperation, while others ended up living in shanty towns.

The movie concerns the large, extended Joad family, all piled into the back of their jalopy and set out for California. Some of them die along the way. When they do get there, they find that the situation is far more desperate than they were told. They take a job picking peaches, for which they have to stay in a tiny, run-down house, but discover that they have been brought in as strikebreakers. At another point they find a “good”  New Deal camp, but the local sheriff’s deputies try to instigate a riot in order to drive them off. The plot is, essentially, a series of terrible things that happen to these people, but they survive, and, in sharp contrast to the original novel, the ending is a hopeful one. Ma Joad (Jane Darwell) gives a speech about how “we’re the people, and nobody in the world can lick us,” just before the end credits. My dog took this as a personal challenge and licked me vociferously during this speech.

From a movie perspective, The Grapes of Wrath is impeccably made and produced. It won the second of an all-time record four Best Director Oscars for the legendary John Ford, working with the cinematographer Gregg Toland a year before Toland worked with Orson Welles on Citizen Kane. While some of the outdoor portions are extremely clearly shot on a stage set, they are all beautifully done. There is some spectacular low-light photography in this movie that really does look like it’s just lit with candles or gas lamps, like Kubrick tried decades later in Barry Lyndon, though it seems unlikely this was actually the case. The cast featured the founders of two different acting dynasties, Fonda as Tom Joad and John Carradine as the preacher who joins the group and eventually becomes a sort of Christ figure. It was long-time character actress Jane Darwell’s performance as the clan matriarch that won the movie’s only acting Oscar, however.

Another parallel between The Grapes of Wrath and the modern day is that many really thought the book to be “fake news.” Even Darryl F. Zanuck, the superstar produce of the film, hired private detectives to go into the migrant camps and verify that things really were this bad. When they assured him it really was, he gave the go-ahead. While most critics praised the movie vociferously, Variety ran a review saying that either the story was greatly exaggerated (and thus Anti-American), or there would be a revolution already. In fact, Steinbeck felt the same way, in the sense that he thought the population should unite and rise up against the people that helped create this situation. The seemingly oblique title, The Grapes of Wrath, is a biblical allusion. The idea is that the things that people are doing to the “Okies” now will eventually rebound on them in the form of the wrath of the populace. When those grapes have been turned into wine, as the metaphor goes.

As part of his support of the film, Zanuck did everything in his power to make the film more “palatable” to both the American public and the studio head, who happened to be a banker like those lambasted by the story. The script heavily toned down the book’s atrocities and more controversial moments, including perhaps its most famous image, when a post-miscarriage Rose Joad feeds a starving man from her breastmilk. In the movie, Rose has not yet had her baby before the end. The book ends on that downbeat note, but the movie added its new, more hopeful ending. 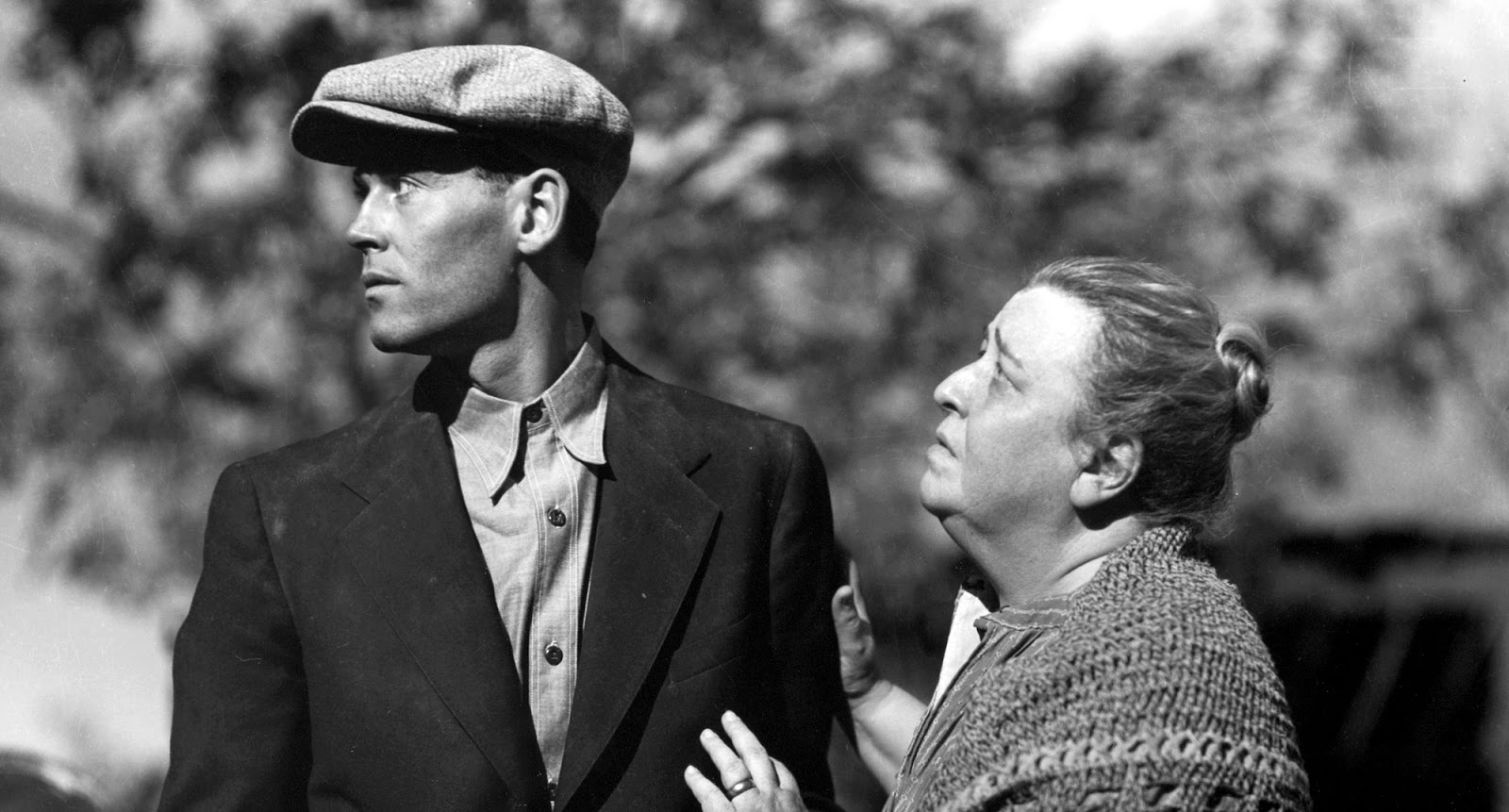 Another measure taken by Zanuck was to assign Ford, under contract to the studio, as the movie’s director. Ford, John Wayne’s favorite director, was a known conservative, and Zanuck thought his involvement would stave off accusations of communist tendencies. I don’t even think the movie says the word “Union,” though unionization and the breaking thereof are clearly important elements of the plot. Ford did connect with the material, however, saying it reminded him of the struggles his own Irish ancestors had undergone escaping from the Potato Famine. Somewhat to my surprise, for all the changes that were made, I really don’t think you can say the movie pulls any punches. In one scene early on, one of the local sharecroppers (John Qualen) recounts his encounter with the man who came to foreclose on his farm. It could just as easily have happened in 2008, or today. The guy says not to get mad at him, it’s not his decision. So who’s decision is it, the sharecropper asks? The land is owned by “a company,” which isn’t anyone. They do have a “president,” who in turn can only do what the bank tells him, and the bank is just the manager, who doesn’t have discretion either. And so on. Somehow money is being made at the expense of most people, and yet it’s somehow no one’s fault.

So I had never really considered watching this movie before, but I found doing it now to be a worthwhile and important experience. All of that said, I’m not sure I can 100% recommend it, outside of everything else, as a movie. It suffers from some of the same problems that many modern “issue” stories have, in that it is unrelentingly grim. Schindler’s List is funnier than this movie. Which, of course, you can do, and do successfully, but it tends to not be an experience I seek out. The Grapes of Wrath never quite transcends that feeling of being homework assigned by your 10th-grade English teacher, rather than a movie you’d go see in a theater. Maybe that’s unfortunate, and maybe that’s the problem we have today that they didn’t have when the book became the biggest bestseller of 1939, but it’s reality. And if you are doing your homework, I think this is probably a good assignment.