Having never actually seen Being There before, I hadn’t realized how similar it would be to a movie I watched just a few days ago, Forrest Gump. Both feature a “simple” man who traipses through life, affecting national events in ways he does not understand. The absolutely crucial thing is that Being There actually has something to say about this. For one, if we become obsessed with meaningless soundbites, those who are good at politics have no relationship to those who are good at absolutely anything else. And also crucially, Being There knows that it is no coincidence that its star is a white man who can look convincing in a suit. It’s amazing how far that goes.

Peter Sellers, most of whose best known films had been a decade before, stars as Chance, a gardener who has lived in the home of the same eccentric rich guy in Washington DC for his entire life. His origin story and his condition are never really explained, though we can speculate. He has never left the house in all that time, and his only knowledge comes from TV, which he watches constantly. But one day the old man dies, Chance has no idea what to say the lawyers who show up, and ends up on the street with just his umbrella and a suit the old man let him wear. Left to wander the extremely dirty streets of DC, he is surprised when his remote control doesn’t make a group of muggers disappear.

Through happy chance, so to speak, Chance is hit by a car belong to the younger wife (Shirley MacLaine) of an extremely rich (but dying) businessman (Melvyn Douglas). He is so rich that the scenes at his house were shot at the Biltmore Estate in Asheville, North Carolina, the largest private home in America, though the movie shows that he lives in the DC area and when the gate opens you can see that there’s a McDonald’s right outside. Chance says he’s “Chance, the gardener,” which they mis-hear as “Chauncey Gardiner.” Both the rich man, Benjamin Rand, and his wife, Eve, very quickly become good friends with Chance, though they completely misunderstand him. He can mimic the shibboleths of their tribe, and they sense his “lack of artifice,” though they misunderstand its source. Meanwhile, he keeps watching TV every chance he gets. 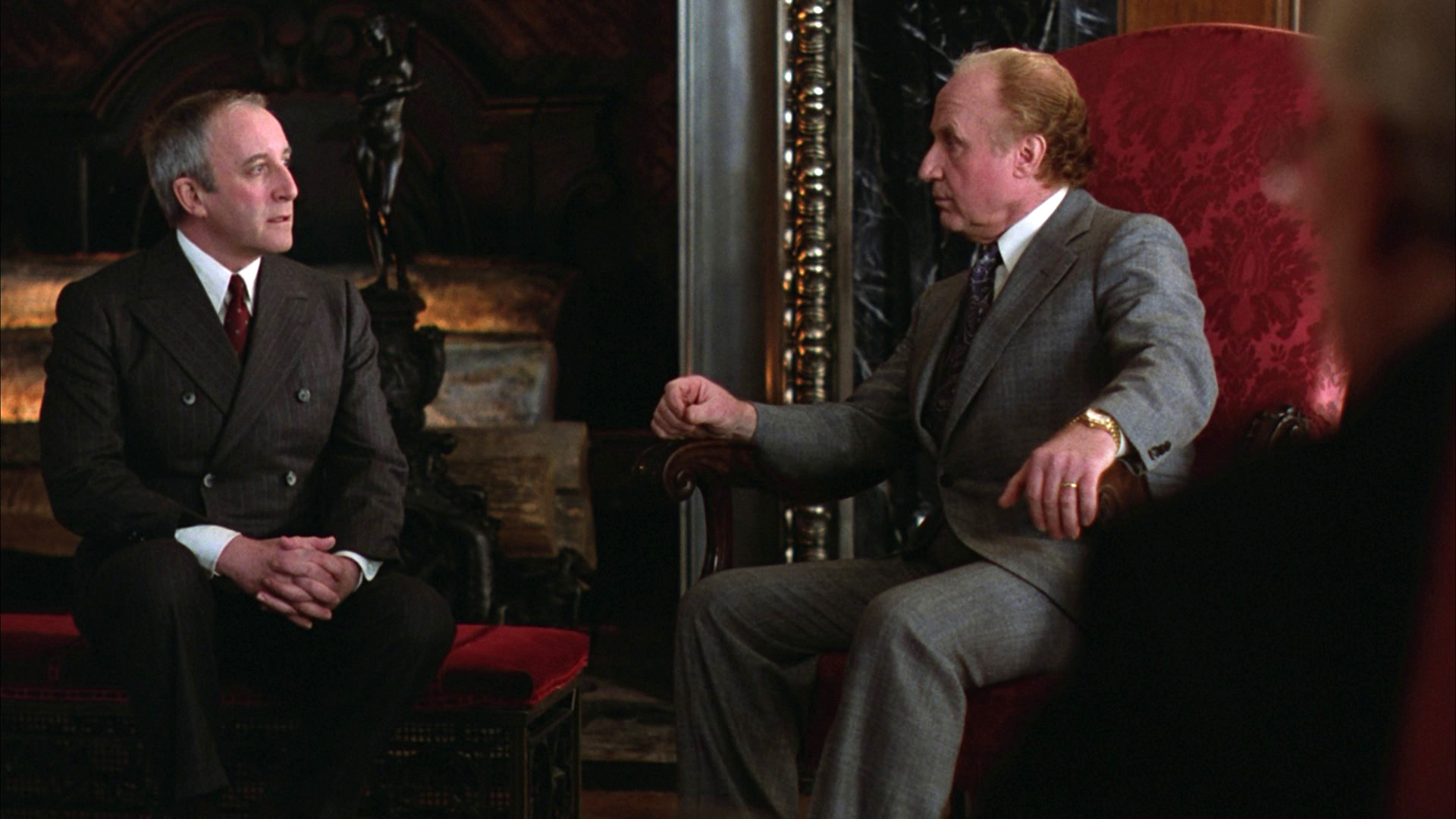 Rand, it turns out, is a close confidant of the U.S. President (Jack Warner), and introduces him to “Chauncey.” Misunderstanding a discussion on economic policy, Chance comments that “first is spring, then summer, autumn, winter… then spring again.” The President, thinking he’s heard some profound philosophy, quotes Chauncey in a major speech the next day. Chance unwittingly agrees to go on a talk show, where his sounds bites about “what kind of gardener” he’d like to be are taken, again, as top-notch sound bites.

Rand, knowing he’s dying, endorses Eve “getting closer” to Chauncey, and she ends up making advances to him. He doesn’t seem to really understand what’s happening, and doesn’t turn the TV off, which leads to maybe the only love scene in movie history set to dialogue from Mr. Rogers’ Neighborhood. In another scene, he first kisses her passionately in imitation of a scene from The Thomas Crown Affair, but stops when the scene ends. In response to her confusion, he tells her he “likes to watch.” After a brief hesitation, she masturbates in front of him, thinking he’s watching her. We can see he’s still just watching TV. Shortly thereafter, Rand dies. At his funeral, we hear a whispered conversation among the pallbearers that Chauncey could be picked as a candidate for President in the next election. He wanders away from the funeral as the President gives a speech about Rand’s philosophy of “life is a state of mind.” In the last scene of the movie, Chance walks out over a pond on the estate, apparently walking on top of the water. Vaguely curious, he sticks his umbrella deep into the water, then walks over the water into the distance.

This last scene is famous, and defies explanation. Is Chance a Christ figure? In what way? It seems to me he’s more like Wile E. Coyote, floating because he hasn’t looked down. In his case, he doesn’t know that he should fall, so he doesn’t. Being There is a subtle but brilliant satire, not just on politics or the state of American public life, but about all of our human interactions. When someone’s talking, are they meaning to say what we hear, or are they just repeating what they think they want us to hear? Chance is a bit like an AI into which has been fed all of 1970s television. He has no thoughts of his own, but are you really paying close enough attention to distinguish him from a “real person?” Very few of the characters in this movie are. 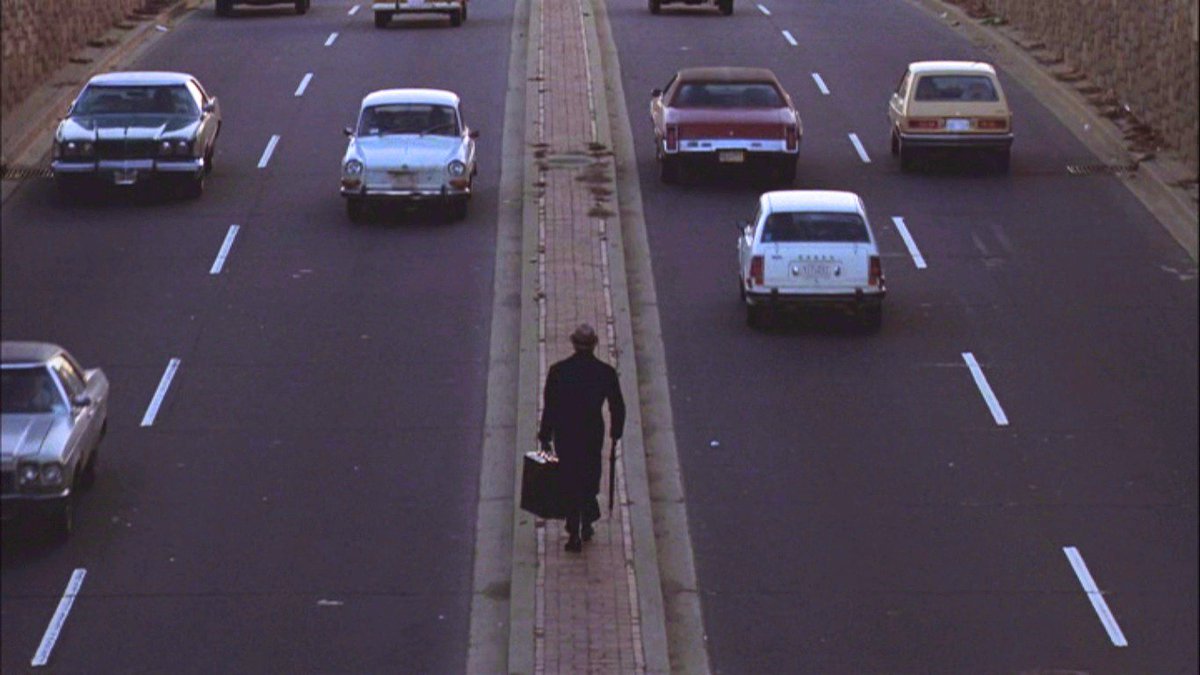 There are only two characters in Being There who see through Chance at all. One is Rand’s personal doctor (William Dysart), who seems to suspect some version of what’s actually going on with him but eventually decides not to say anything after Rand tells him that Chance has “made the thought of dying less frightening.” The other is Louise, the Black housekeeper of the old man at the beginning of the movie. Though she was always friendly with Chance, when sees him on TV later in the movie she is annoyed. She comments that it is amazing how far you can get in America just by being white.

Peter Sellers is one of the great icons and eccentrics of American movies. Some said that he seemed to have no personality other than what he showed on screen, a blank slate for audiences to project on to. Never was this more the case than Being There, when, according to his co-star Shirley MacLaine, he somehow stayed in character as Chance throughout the shoot. Other friends genuinely thought he had gone insane. After a brilliant run in the 1960s, his career in the 1970s had fallen into a funk, with some charging that he had fallen into self-parody with three Pink Panther sequels and a series of other bizarre roles, such as “a sexuallly voracious Queen Victoria” in The Great McGonagall. Shortly before his role in Being There, he guest starred on The Muppet Show, where after Kermit told him that he could relax and be himself, Sellers replied “But that, you see, my dear Kermit, would be altogether impossible. I could never be myself… You see, there is no me. I do not exist… There used to be a me, but I had it surgically removed.” Being There, it turned out, would be his last great role. He died the next year of a heart attack at age 59.

Some, I might even say most, satires are pretty aggressive towards their targets, and Being There certainly has its moments. I particularly like the scene where Chance emerges from the old man’s home for the first time in decades, set to a crazy jazz version of “Also Sprach Zarathustra,” and finds that the neighborhood is now mostly camps of homeless people. But for the most part it’s a surprisingly soft touch. Being There constructs scene after scene that feels like a house of cards, set to collapse at any moment (like the scene where Chance somehow convinces the Russian ambassador that he speaks Russian and is familiar with Russian folktales despite never actually speaking any Russian). It sort of feels like a miracle.

But what can this movie tell us today? It keeps its messages and meaning close to its chest, enigmatic to the end. It is, I think, a warning against emptiness, empty platitudes and empty talking points. Or maybe it’s telling us that, even in a world with plenty of emptiness, there is still meaning to be found. Are Chance’s gardening-based platitudes actually meaningless, just because he doesn’t understand their meaning? Does he really love Eve, as he confesses near the end of the movie, and can only express it through things he learns from TV? Is that so different from couples that meet online and court each other through memes from The Office? Being There gives its audience plenty to discuss, and is smart enough to realize it doesn’t actually have all the answers.