Frank Capra did not invent the “American Dream,” but he may have done more to spread and perpetuate the idea of it than any other artist. It is no accident, then, that he lived it himself: he arrived from Sicily with his family in New York harbor at the age of 5, grew up dirt poor in Little Italy, went to college, essentially bluffed his way into directing movies, and ended up as the first director to be considered such a draw in his own right that his name was put “above the title” on movie posters. When he made Mr. Smith Goes to Washington, many of his contemporaries, including current members of Congress, were worried sick that the movie would spread anti-American sentiment, seemingly on the basis that portraying any members of the government at all as weak, incompetent or corrupt was thought to be a bridge too far in 1939. But what Capra knew, with the backing of his studio at Columbia, was that the movie’s message of the little guy defeating the political machine, through the power of sheer patriotism and American institutions working the way they’re supposed to, would be what audiences left the theater with. The US Ambassador to the UK begged Columbia not to release the movie in Europe as World War II began, but they did. He proved so spectacularly wrong about the movie that, when the Nazis took power in France in 1941 and ordered all American movies removed from theaters, many theaters showed Mr. Smith Goes to Washington as a last act of protest. One Paris theater reportedly showed the movie on a loop for thirty days straight before being shut down.

Of Capra’s films, It’s a Wonderful Life is certainly the most watched today, but many critics will tell you that they think Mr. Smith Goes to Washington is his best and most representative work. It stars James Stewart, in one of his first big starring roles, as an idealistic, patriotic small town yokel named Jefferson Smith who is appointed to the U.S. Senate to complete the term of the suddenly deceased incumbent, under the idea that he will be easy for the local “political machine” to control. The state is never named and has a fictional capital called “Jackson City,” but from context seems to be somewhere on the Great Plains. Smith is so star-struck upon arriving in Washington that he disappears for several hours to go on a sight-seeing tour, to the panic of the political operatives who are supposed to be keeping an eye on him.

But Smith’s naivete is put to the test when his pet bill proposing a “national boys camp” includes the same site on which the political establishment intends to build a dam for purposes of a seemingly elaborate “graft” scheme. When he refuses to back down, they frame Smith for blatant corruption and try to have him removed from the Senate. In the movie’s famous climactic sequence, Smith filibusters on the Senate floor until he collapses out of exhaustion, but wins the day after the senior senator who he idolizes (Claude Rains) has a crisis of conscience and admits to everything on the Senate floor.

Some of the tropes used in Mr. Smith entered the American lexicon so thoroughly that its hard now to see anything as “inventing” them, but this movie did. For example, having a character go the Lincoln Memorial and stare up at the statue for “inspiration” is now one of the tritest, most cliched things you can do in a movie, but Mr. Smith is the original version. Its story has been parodied in three separate episodes of The Simpsons. It can probably even take credit for turning the filibuster, a rarely-used quirk of the Senate rules at the time, into a much more prominent aspect of American politics. The movie lauds the tactic as a kind of triumph of the common man, the idea being that any man can take a stand as long he can literally stand. But in the years since, the filibuster has become one of the the greatest tools for many less-positive causes championed by a tenacious minority. For example, the record for the longest filibuster is currently held by Senator Strom Thurmond of South Carolina, who spent 23 hours railing against the Civil Rights Act.

If the movie works at all, it’s because it contrasts Smith with more seasoned Washington insiders, like his aide Saunders (Jean Arthur), who is ready to quit politics and sighs that “the future belongs to the dopes,” an early version of the Idiocracy-style cynicism felt so often by intellectual types in the years since. Of course she falls for him over the course of the movie (portrayed in one scene where she gazes dreamily at him through the most vaseline-smeared lens I think I’ve ever seen), and helps him through his filibuster. The movie is steadfast in having her be the smartest person in the thing, though it betrays its basic 1939 sexism more than once (Jimmy Stewart literally tells her she’s “doing a great job for a woman” at one point, and she takes it as a compliment). The Senate treated so reverentially here has no women in it at all.

The movie’s plot is driven by Smith’s fight against corruption, but it’s very important to the movie’s basic worldview that the system itself is perfectly fine. The corruption is in Smith’s home state, rather than in Washington. The Vice President (Harry Carey), presiding over the Senate, tacitly encourages Stewart through his filibuster, seeming more wryly amused than anything. The movie is full of barely-disguised civics lessons, like the scene where Saunders describes, in detail, how a bill becomes a law, right down to conference committees. We repeatedly cut to a radio commentator describing the mechanics of the filibuster (the commentator, I learned, is played by H.V. Kaltenborn, who was one of the more famous news personalities at the time and is actually playing himself, like when movies today have Wolf Blitzer or whoever on the TV). Capra believed whole-heartedly that America was great, that its people were good, and that if a man worked hard enough he could overcome anything. 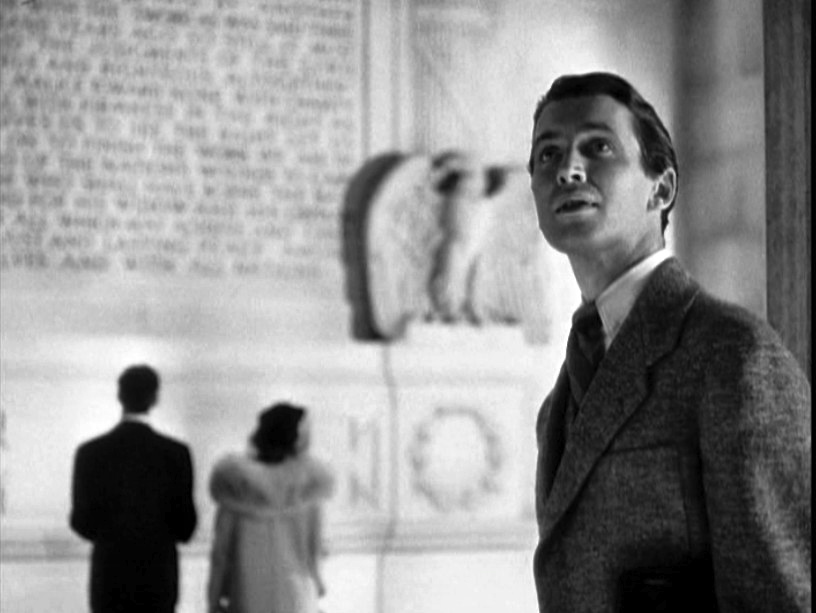 Mr. Smith Goes to Washington capped Capra’s 1930s heyday, which had included three Best Director Oscars in the preceding five years. Even at the time, he developed a reputation for what his critics called “Capra-corn,” stories about little guys from idyllic small towns winning the day over the forces of malevolence, surrounded by well-meaning but silly side characters (often portrayed by members of the same troop, from film to film). “Capraesque” remains a term you’ll hear today, most commonly in relation to harmless, Hallmark-ish movies set in small towns, though sometimes you’ll hear it used to describe the small towns themselves. Capra volunteered for the army after Pearl Harbor, where he directed the Why We Fight documentary series. After he got out, he made It’s a Wonderful Life with many of the same actors as Mr. Smith, but his career went downhill from there. A conservative Republican, he became more and more disillusioned with the movie industry, and before long entered an early retirement. His 1971 autobiography reads like the rantings of a very cranky old man, such as his assessment that “practically all the Hollywood film-making of today is stooping to cheap salacious pornography in a crazy bastardization of a great art to compete for the ‘patronage’ of deviates and masturbators.”

By even the cynical 1970s, Capra’s view of politics seemed like a relic of a bygone, idealized age, and now feels even more like conservative White man’s fantasy of an America that never existed. But in Depression-era America, audiences ate up the idealism of Mr. Smith and Capra’s other “corny” comedy/dramas about how people are essentially good and will triumph over corruption and greed. And honestly, it’s a message at which its hard to get angry. It seems the ultimate cynical act to insist that saying “people are essentially good” is “out of touch.”

I had a great time, while writing this, Wikipedia-diving on members of Capra’s usual supporting cast. Thomas Mitchell (remembered today as the hapless uncle in It’s a Wonderful Life) plays the drunk reporter Diz. He had a completely crazy year in 1939 in particular, also appearing as Scarlett’s father in Gone With the Wind and as another drunk in Stagecoach, winning a Best Supporting Actor Oscar for the latter role. I get the impression that actors tended to be more pigeon-holed in those days than the are today, perhaps because they were under contract to a specific studio that often wrote parts with the actor in mind. Beulah Bondi, for example, played Jimmy Stewart’s mother in four different movies, while Ruth Donnelly played the wife of another actor, Guy Kibbee (the governor here) several times. Astrid Allwyn, who plays the vaguely fatale Susan here, “often played the woman from whom the male star escaped,” according to her page, while Edward Arnold (villainous newspaper magnate Jim Taylor) played a very similar role of a corrupt authority figure, pulling strings from behind the scenes, in a minimum of ten different movies. One actor not in the usual Capra troop who appears here is Harry Carey, who started out as an actual cowboy in the latter days of the Old West and went on to become a big star of Westerns in the very early days of cinema. He received his only Oscar nomination for his role as the Vice President in Mr. Smith. Several actors have been nominated over the years for playing various Presidents, but Carey’s remains the only Oscar nomination for playing a Vice President.